(This will contain a few spoilers for Disco Elysium, but nothing game breaking. This is a hard game to spoil and you can absolutely still enjoy it despite knowing occasional details.)

Disco Elysium is a game about alcoholism. That's an unavoidable fact. It's in the marketing. It's right up front. The first visual in the game is a man lying on the floor of a trashed hotel room, empty bottle in his hand. It's at the core of it. Much of what you do during the first in-game day is walk around and take a toll on all the damage your player character has caused in his prior three days, where he was on a furious drug-and-drink-addled spree, blown out of his mind and causing chaos, terrorising a small neighbourhood.

You wake up after all that, to atone the damage, and pick up a murder investigation the drunk version of you clearly wasn’t interested in dealing with, since, by the way, you’re a cop. 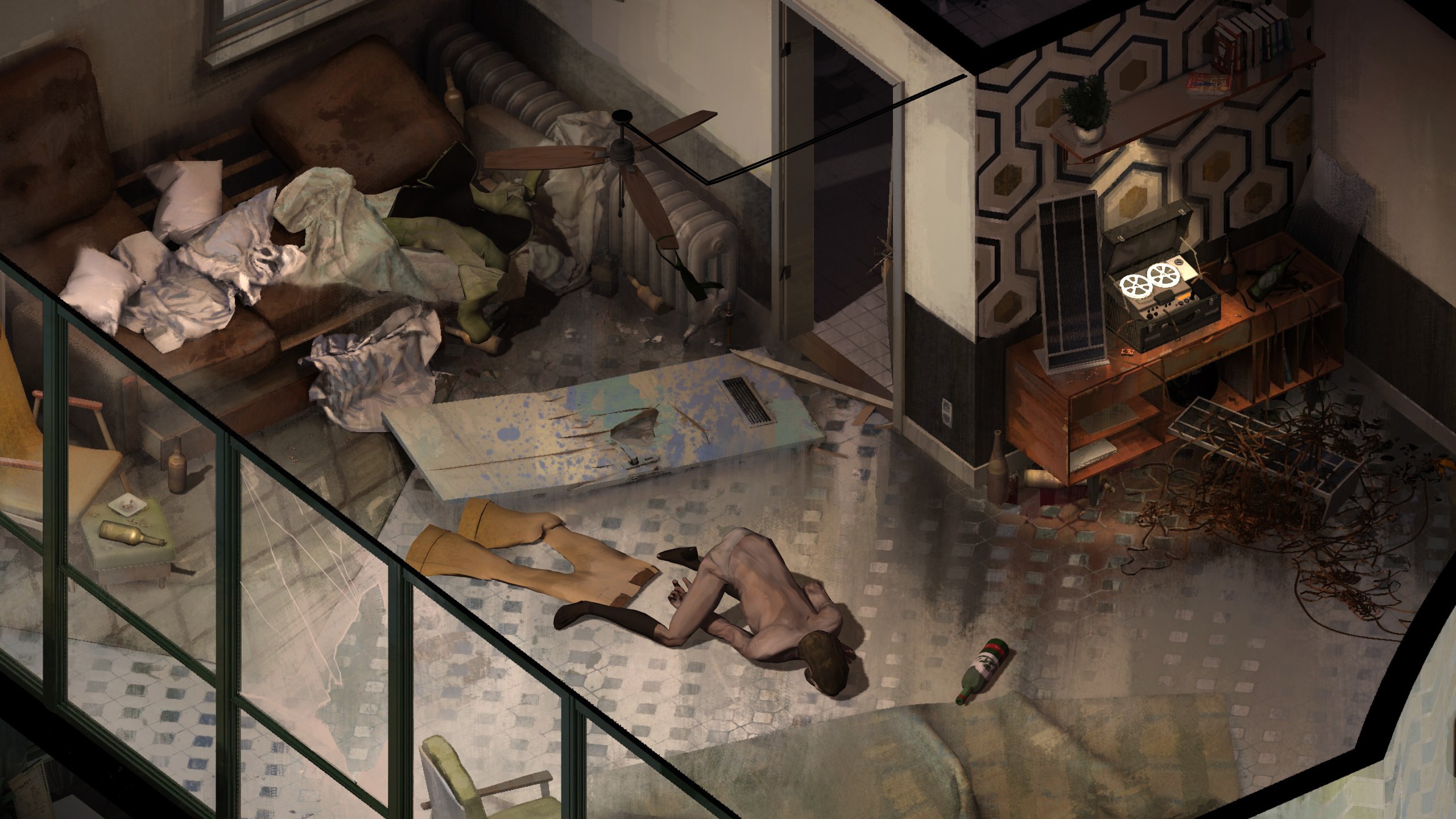 Here’s a thing about me: I don’t drink. I never have, no interest in it. Honestly, I'm mildly disgusted by it. Also, I really hate drinking culture and how prevalent alcohol is to socialisation. I’m fine with you drinking, just don’t offer me one or ask me to clean up after you.

And maybe this is a fault of messaging or just the messaging I saw, but a lot of the initial impressions of this game was that it revelled in the player being a “trash disaster”. The Steam store page has the line: “Become a hero or an absolute disaster of a human being.” And it often comes off as if being played for laughs. It’s funny that this guy, instead of owning up to his choices, doubles down and decides that he’s the greatest detective who’s ever lived, or a rock star in hiding, or a hobo, while continuing his gleeful ignorance of the ways he’s hurting other people.

Disco Elysium's main character (name pending) has more than just a little drinking problem. They are not shy of playing up the absolute state of depravity and sadness that took over him in the days before we are given control of him.

You consistently have options to act drunk and stupid, as if you still haven’t fully woken up yet from a drunken stupor. You can apologize and promise to do better, but it also wants to hang on to the trash disaster routine, at least for a bit.

And Disco Elysium is a game that revels in failure. It wants you to be a bumbling, unsuccessful cop. It wants you to stumble and say zany, crazy things (one of the loading tooltips directly say this) and laugh at the outcomes. It wants to make jokes with your failure. And this is where it gets complicated, because when it works, this is gobsmack, gosh darn incredible.

This is a game with a ton of skill checks, and at its best, it works better if you fail a check than succeed it. One of my early joyous moments was failing a rhetoric check and the character being determined to get on his knees and beg to a foul-mouthed twelve-year-old that I really needed his help, and please can’t you see how I’m begging you. It didn’t work. But it was pretty funny.

And this is why my feelings get complicated on this game. Because it is funny to fumble every time you attempt to catch a flying object. It is funny when, upon hearing of something called a “contact microphone”, your internal Encyclopedia fills you in that there’s a boxer called “Contact Mike”, and you can then ask if the microphone is related to the boxer (they’re not).

I find it funny to fail. Sometimes. I just don’t find it so funny to lean into being a drunken shitbag-mess. 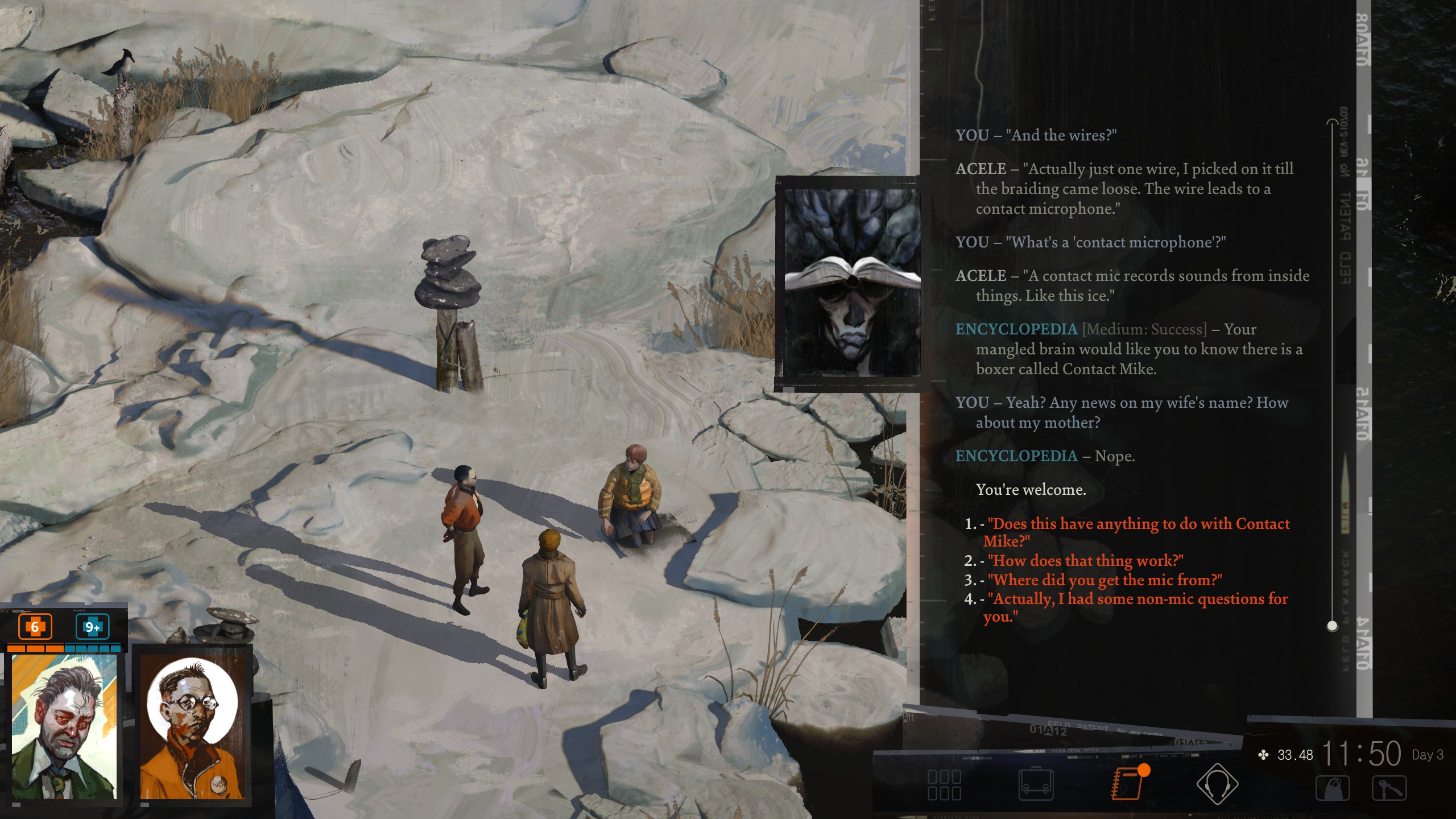 And the game does seem to get this difference. But it’s bad at conveying it up front.

I don't think the game wants to root for Harry The Alcoholic as much as it does want him to own up to his mistakes and move forward. Genuinely, it does seem to want that. There are options for it, thoughts for it, you have a much smoother time throughout the game and your conversations are closer to a real person's. But the duality is inescapable because the game also still wants to revel in the shit-fest. It wants to allow the player to have learnt nothing, to play the idiot, to play the drunkard asshole, too. Let me just repeat: Harry did some really fucked things before we get control of him. And no, alcohol is not an excuse.

I never touched alcohol in the game. Didn’t want to pick it up, didn’t want to engage with it. I kindly said fuck off when my electrochemical brain asked for speed. I wanted to get out of the dream sequences, where he’s at his lowest, listening to the lizard brain, because they just felt out of character.
I never died. I was never in danger of dying. I had health items for days even when I used one every time I lost a pip of health. I had enough volition to last without, too.
I played as a straight albeit aloof and bumbly cop who never really had it all together but was never a disaster. And yet, I was constantly apologising for a disaster someone else in my body had made.
Still fucking up, still making mistakes, still fumbling and trying, but always feeling like I ought to be better than a shadow I never made. Because here’s the thing: There are other versions of a fuck-up cop than a drunk one. There are other ways to be silly and make mistakes and be weird, than being drunk.

The game seems at once ready to let the character make all the mistakes it wants, but also expect that those mistakes are because he’s a drunk trash disaster anyway and that’s why he fucks up. “Of course you’d fuck up, you’re a drunk.”
I guess what I’m asking for is for the narrative to recognize other reasons for failure. 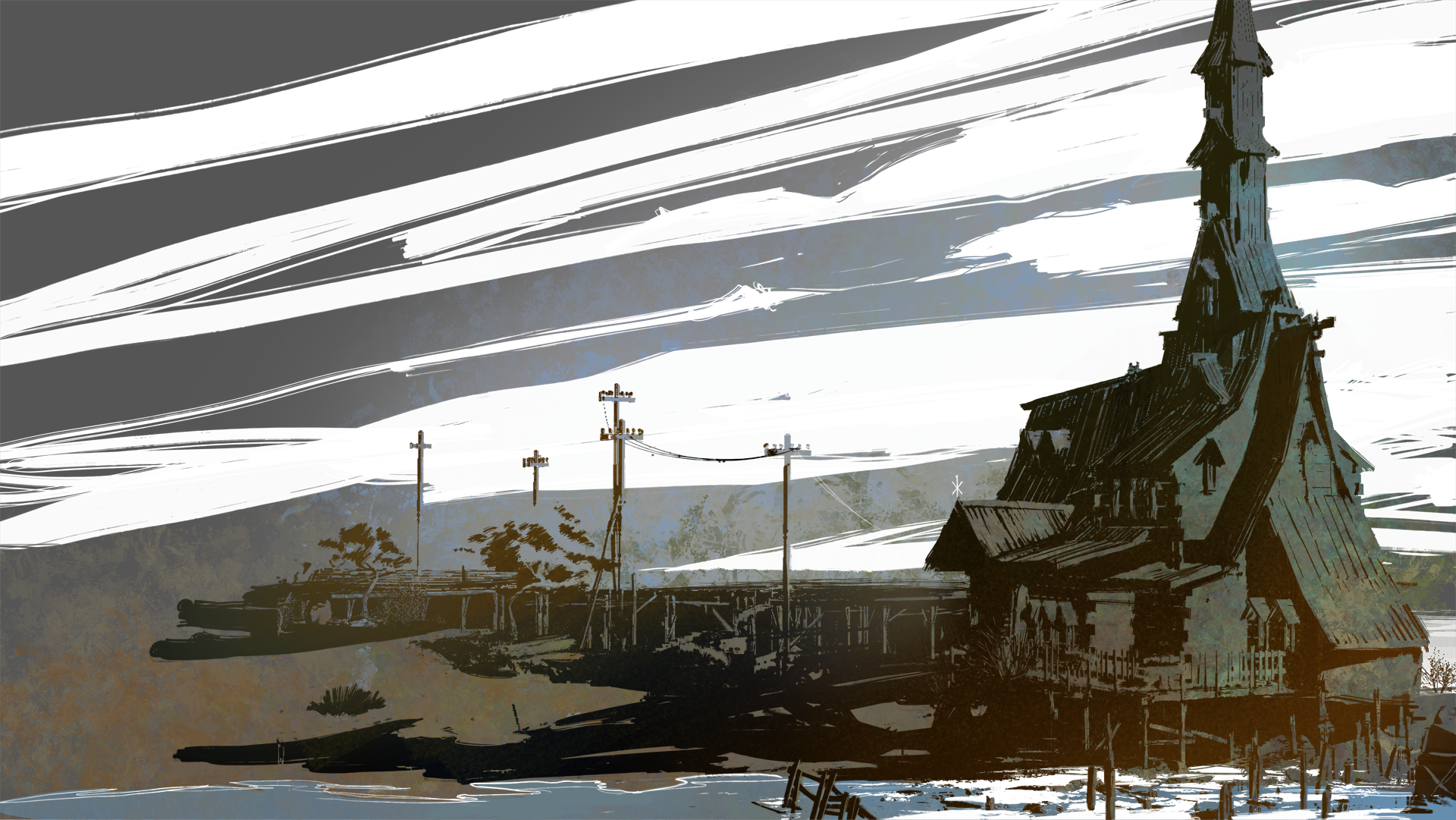 What I can’t help but shake is that this game is so much more than the drinking. And I wish I could play a version where it wasn’t a given that I had been a drunk. This game could absolutely work without the “Sad Man Shit”. It works, already, the further it leans away from it. When it’s melancholic, it works. When it’s silly, it works. When it is depraved, it doesn't.

And this is where I'm struggling because I don't want to say the game shouldn't allow those choices. Clearly, it's been a successful design. It works for a lot of people.
And there is a lot about this game I like and want to see taken forward, but I also realized that this part just was not for me.
And I almost gave up on the game because of it. I had written out half of a version of this blog where my conclusion was just that: I had given up. It was too much. I couldn’t.
But thankfully, I stuck with it, and the latter half of the game is much more focused on the parts of the game I like.
Sitting with your buddy, waiting for the tide, trying to whistle. Tense conversations as your mind is realizing its being played. Meeting the dice-maker. The church. The ending, oh man, the ending. 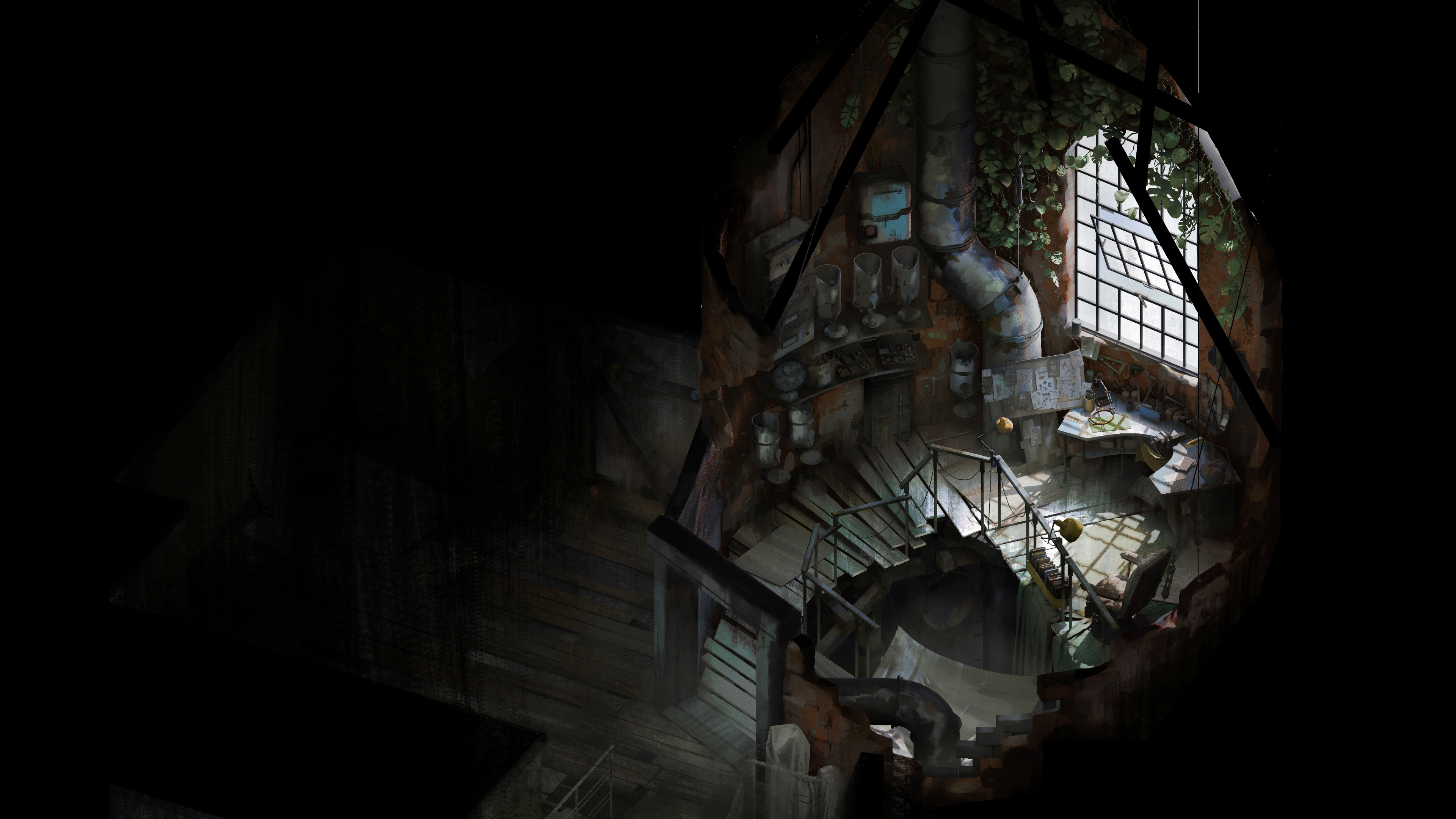 (Screenshots and concept art is from https://zaumstudio.com/media/ or shot by myself)

There’s a running element throughout the game that, if you look in the mirror, he wears “The Expression”; a disgusting, terrible face he's kept since the era of Disco, back when he was young and could party like he's still trying to. It’s now been frozen on his face for 30 years. It’ll stay on him the entire game unless you pass a (difficult) skill check. I did. I felt so much better after that.
The Expression is a sad, gross face of a smug asshole pretending to be something else. When you lose The Expression, he’s sad, struggling, and frail. But at least it’s real.

I'm really curious what ZA/UM does next, and hope they either make something in the same vein or in the same world as there's a whole lot to tap into there. But I also hope I'm able to play as something other than a (non)recovering drunk.