Sooo… this post was originally intended to come out in late April or early May.

So, things went really fast. And as you can maybe guess from my general output here, I’ve been extremely busy. April was incredibly hectic (because of the things below) and then May just sort of… continued. Not with the same things mind you, but I guess a semester project (just delivered three days ago!) and three course projects don’t just happen when you’re off doing other things.

And I’m not even the most busy person I know. But hey, here it is. I had grander plans with this post but now it’s pretty much just a “great things happened in April and I want(ed) to talk about them”. So...

Nordic Game Jam happened this year too! And even bigger than last year. And more crazy, with the Copenhagen Games Festival happening before that.

Okay, didn’t participate fully in the Games Festival, outside of the neat “Story” Miniconference on Wednesday and the NGJ Pre-party on Thursday. But those were both pretty great, with the Hebocon at the Pre-party being one of the highlights (Go Cookie Cutter!).

And the jam itself was even better this year. Somehow, they managed to cram nearly a thousand people into my school and we all made a game over a weekend. Some great stuff happened over that time, I met and talked with some phenomenal people, and made a game! 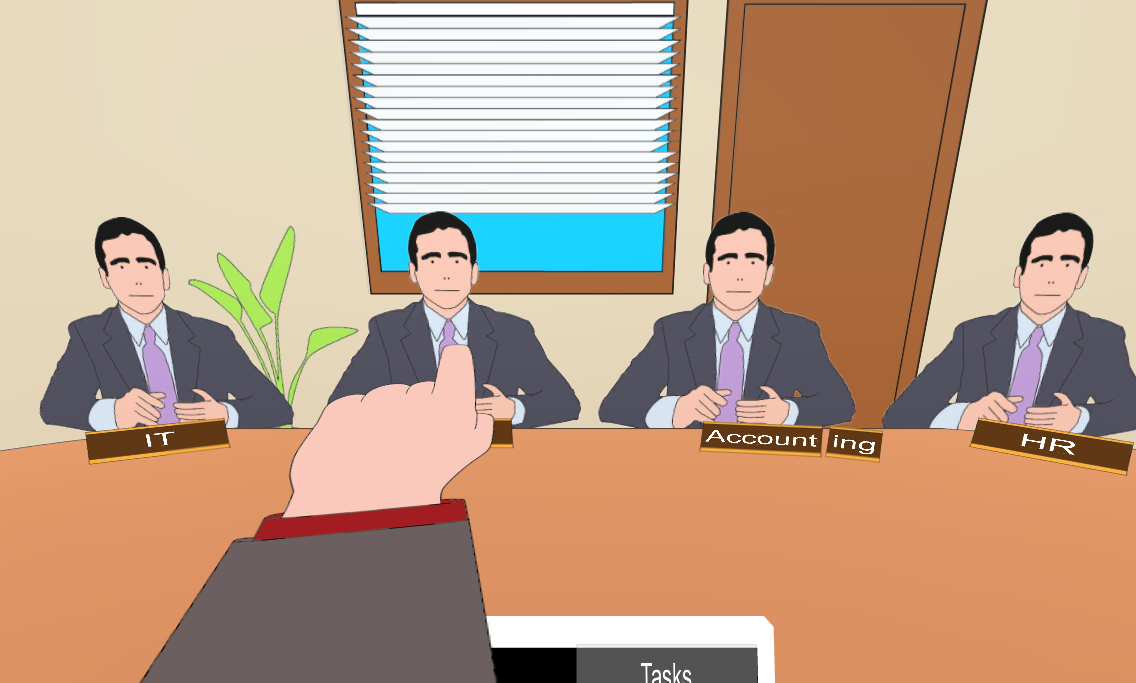 I love the visual gag with the Accounting sign. We laughed a lot when we realized that was the "perfect" solution.

The game’s up here, and it turned out pretty good! Didn’t win or anything, but I’m pleased with it. We set up some goals in the beginning and we managed to fulfill pretty much all of them. When does that ever happen?

If you’re interested, it’s a hectic management game about controlling a public information leak at a Cardboard Company, before it all goes bad and everyone knows your dirty secrets.

It even got mentioned in a rockpapershotgun article!

So that was pretty awesome.

Then I there was two days of resting/working until...

Like around half the game-playing internet, I’m a huge fan of Dark Souls. Regardless if I come for the cryptic lore or the incredible mechanics or the tight challenge, I want to explore the world of Dark Souls, no matter what iteration we’re in.

I’m not going to spend a ton of time on this one, since there’s a lot of content on Dark Souls III (and I and II, and Bloodborne and Demon’s Souls) out there already, so let me just say that this one is so far really good.

I haven’t gotten that far yet because of the thousand other things that happened in April, but I’m in the Cathedral now, for whomever that means anything, and I look like this: 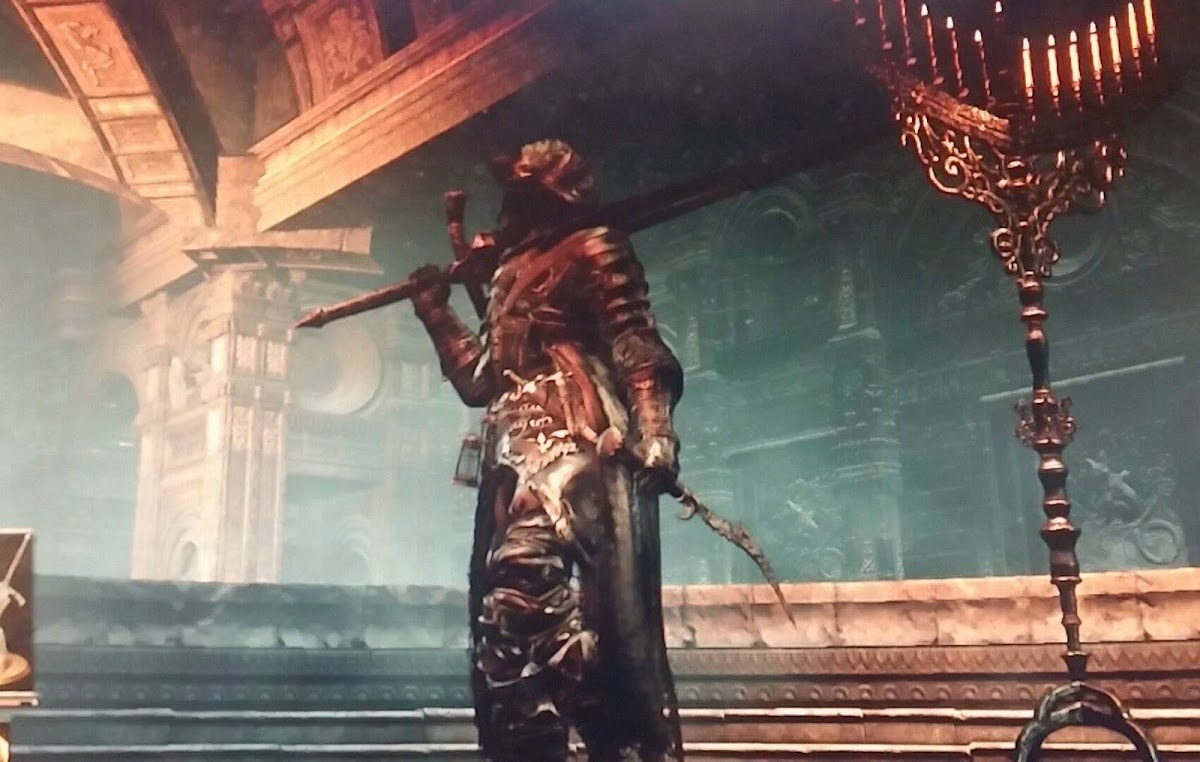 I love how even simple armor sets in this game makes you look awesome. (Sorry for phone image)

The only problem is that Overwatch just came out. And now we’re getting close to the next Witcher Expansion, “Blood and Wine” on the 31st of May, and No Man’s Sky on (my birthday!) the 21st of June.[Apparently not anymore :( ] And… I’m pretty sure I won’t finish Dark Souls before those. I want to see it through, though, as the post-game lore-dive on the internet is one of my favorite things about playing Dark Souls games.

But I’ve always played these games slow, so I’m not worried about it. Enjoying my time, smelling the flowers and all that. While getting smacked in the head with a sledgehammer.

(Ok, Program Music II actually came out after A MAZE, but that segue was too good. Not that anyone but me will get it. If you’re confused, just ask me.)

Program Music II came out on the 23th of April.

Read this to catch up on why this album means so much to me. 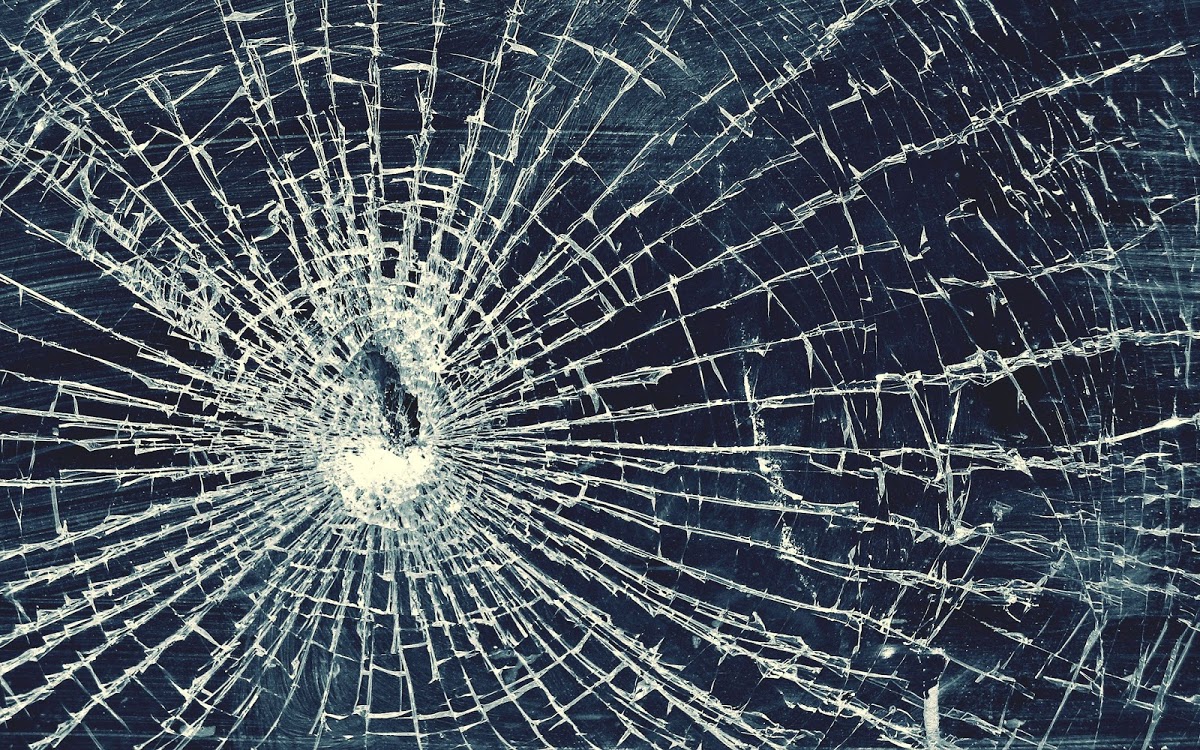 If you do not see the beauty here I cannot help you. (Note, this has got nothing directly to do with Kashiwa Daisuke, but if you read that sledgehammer link you'll understand.)

I got home Monday after A MAZE, really tired after the first day back at work, and I found this in my mailbox. Yes. Physical mailbox. With a physical CD inside. It’s still a thing.

I wanted it physically because… come on. It’s really important to me. And I have (almost) all his other albums as CD’s (except 5. Dec, because *shrug*. And that’s really hard to find.). So of course I got it on a CD.

I’m listening to it right now. As I write. [Well, I did, when I wrote the first draft.] It’s fantastic. It’s really good.

It’s… different though. It’s not really a Program Music album in the same vein as the first one. It is in some ways—it’s got a few of the thematic elements, as well as a reliance on great drums and a strange but fantastic use of strings that fit within what Program Music is… but it strikes a different chord as well.
He has removed all the electronic elements, making it a purely acoustic, well sounding album. It’s impressive and huge and well done, but I can’t help but feel I want some of that Kashiwa glitch in there. Even without it, tracks like “city in the lake” and “Subaru” almost sound like they’d fit on Program Music I, but many of the other tracks fall a bit short or are different—some are almost pure piano tracks, like the album “88”.

The closest description is it’s a mix between Program Music I, 88, and his “pop” album 9 Songs. As I wrote in a tweet it’s definitely one of his most listenable albums. It’s light and jumpy, fast paced at times and solemn at others.

Listening to it as a whole, you almost get the same feeling as you do listening to parts of “Stella”. But it never reaches that intensity or beauty where it all makes sense, where everything feels like it’s been one long road to one moment, that all you’ve heard, no matter how weird, all plays up to one piece.

But hey, it isn’t always fair to compare any of these songs to Stella. But with a name like “Program Music II”, it’s hard not to.

But Program Music II is still amazing. I’ve listened to it over and over again over the last week and it’s been great each time.

Anyways, let’s wind back a couple days to:

A MAZE! Look! There I am right in it! 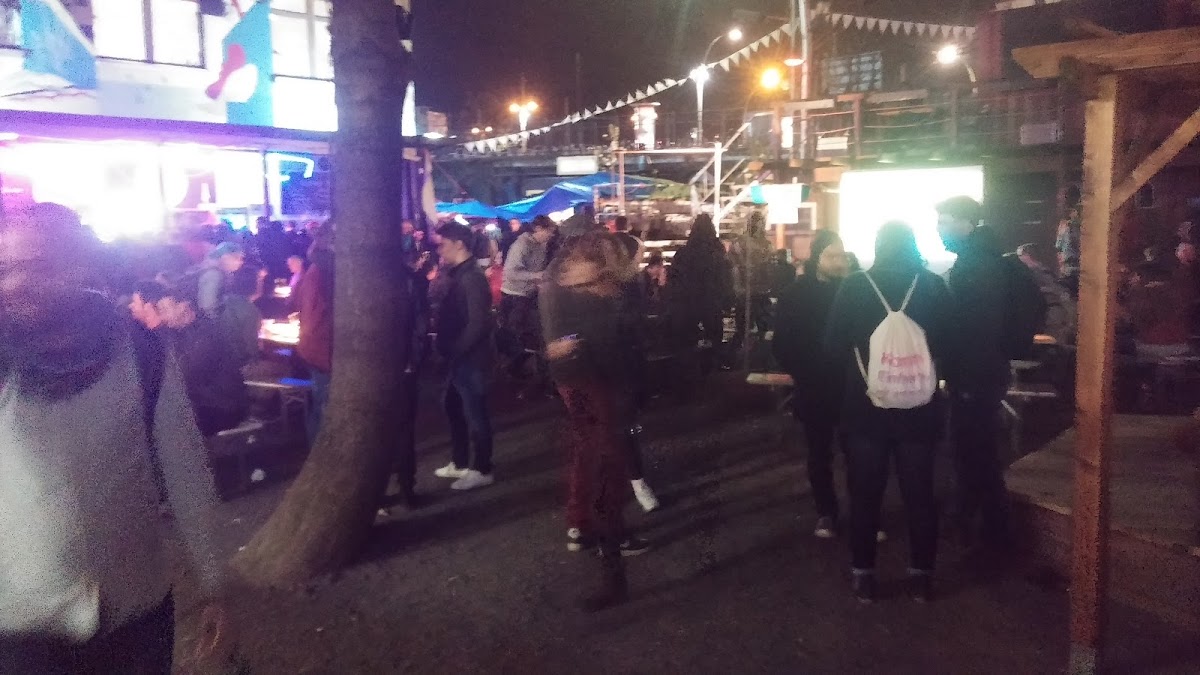 I went to A MAZE with two great friends after we decided to volunteer together. So after a short skip of a flight and half a day of roaming around sunny Berlin, we were at A MAZE.

A MAZE is, if you haven’t heard of it, a festival for independent, experimental games, art games, and anything in between. It’s a place for all those types of games that most likely have no commercial viability, but are, in some way, interesting or remarkable. There was everything from a penis jousting game to a two-player experience about drone warfare to a strange rhythm game where the controllers were taped on trees.

It was a spectacular experience full of wonderful, insightful people and great games. It was also far more of a festival than I had anticipated at first, and a lot of the time was spent also just chilling, and being, in that kinda crazy environment on of Berlin’s old factory-buildings-turned-street-hippie places, and one of them even had a swimming pool (which some also made a game with, of course).

And people were just so unbelievably open and ready and willing to talk there. Of course, I was probably too shy and didn’t talk to enough people or didn’t really get everything out of it I could, but I can say with a fair amount of certainty that I still got out of it what I wanted with several surprises along the way.

As a spectacular takeaway, I wasn’t asked once if I wanted a drink or why I didn’t drink. Like, not once. That’s kinda cool. (Oh yeah, don’t think I’ve ever mentioned this on this blog: I don’t drink alcohol. No, I won’t tell you why. Not now anyway. Might be in a later thing. But for now read this to get no idea at all.) But merely the fact that I wasn’t even asked at all goes to show how welcoming an atmosphere A MAZE has created for itself.

Don’t think I’ve ever seen a wider mix of people and games all around each other and seen them getting along so well. A MAZE’s got something magical going for it.

And now we’re dead in the end of May and I’m about to finish my 8th semester, after creating probably the greatest game we have ever made on a semester project (to be fair, the competition there isn't great). I don’t have a lot to share about it, but I might have soon(?). However, I will leave you with this: 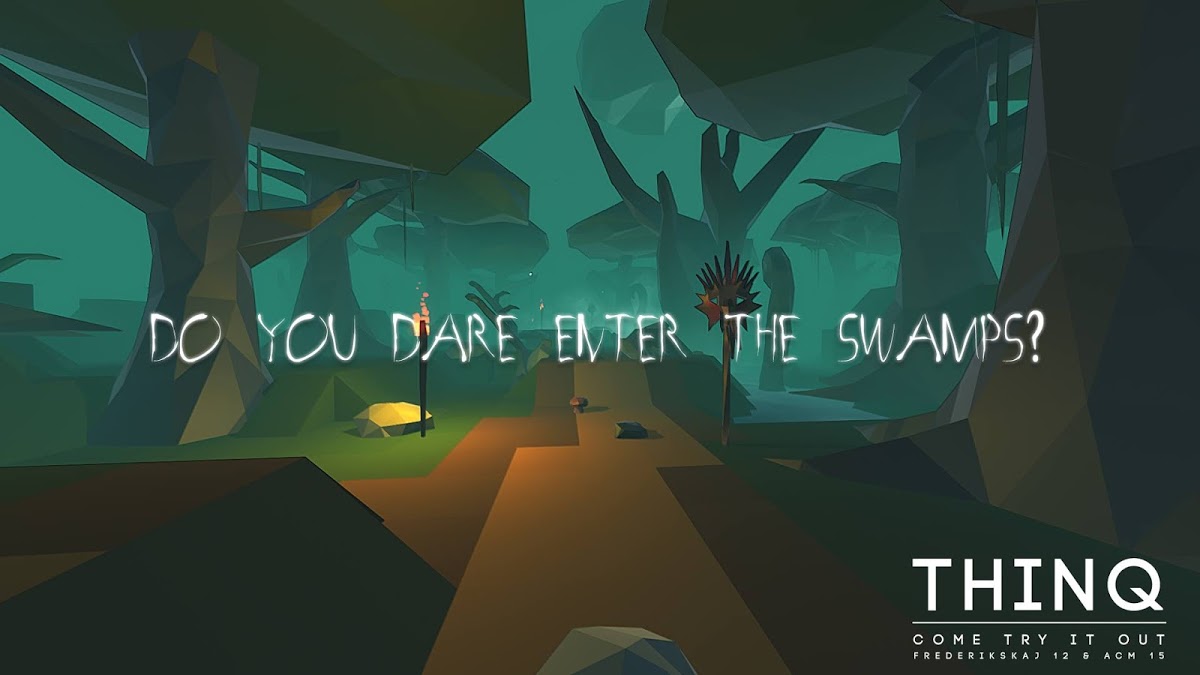 And, now June’s right around the corner. I hope I get more time to write stuff up here. Because it’s been a little too long. And writing is fun.

PS: Wow, okay that’s weird. I just looked up my article about Nordic Game Jam last year. And just after that is an image from Dark Souls II. Which I played at that time.
That’s a little crazy.

I can’t believe it’s only been a year. So much has happened.