[This used to be 4 separate blogs, one for each week, but I merged them when I migrated to statamic.]

The first week of my WAG creation has mostly been spent on system creation and programming. I decided to make it in Unity, because, while that isn't the easiest editor to just write in, it allowed me to do more visual stuff easily. And I'm just more familiar with it than any other engine.


However, that led me to face one challenge: I had to make a system that allowed me to progress dialogue and text in Unity. Since Unity is not really a text-focused engine, there isn't any pre-built functionality for that.
So I created my own little system, that progresses text and allows the player to choose dialogue options when necessary.
I could have probably used some plug-ins or other fancy tools that could have made part of it easier, but I knew exactly what I wanted from the get-go, and it was relatively simple to do (I thought).

However, here's the thing: I am not a systems programmer. I am barely a programmer. Sure I can program a bit, but mostly just to get things up and running, not to create full systems that do things dynamically, and well.
So knew I was going to spend most of the first week on creating this, so I could actually have something up and running for the rest of the month. And I have something that works (mostly) as I want it to. It's pretty janky, and it works in a weird way that most programmers would probably yell at me for, but whatever. It's mine, right? I know exactly how it works. And I can use it for exactly what I want.

Unfortunately, I have probably spent a bit too much time, comparatively, making this system, considering this is a writing focused "jam". Hopefully I can now mainly focus on the writing for the rest of the month, to alleviate that.
At least it'll look neat and different! (I hope)

As a consequence, I haven't gotten a lot of writing done, and I don't really have that much to show. Except that my Unity scene looks like this (with everything selected and nothing deactivated): 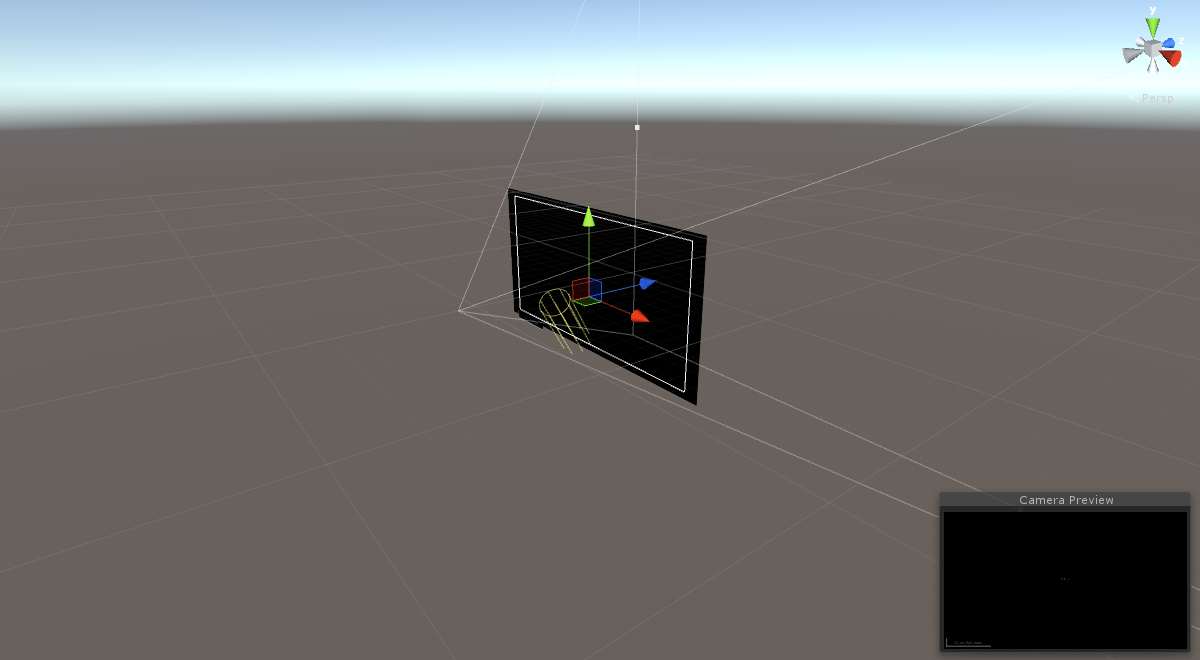 WOW, right? Hope you were sufficiently blown away by that.

Apropos writing, though, I realized I faced another challenge I haven't really faced before.
This is, I realize, my first time actually writing a branching dialogue. I can't write just straight in a Word document, because the branches are difficult to discern and will look bundled up on each other, which makes them hard to read as they are intended. And writing straight in the code is far worse for writing flow (since I'm writing each dialogue in a separate entry in a List, which is shitty to read through.
So today, I tried writing the dialogue in Twine, so I could get it branching properly (and actually experience the dialogue flow before putting it in the system). This is neat, and good for overview of the dialogue as well. However, this also has some flaws because I'm writing "code" that I don't need because it's kind different than my setup in Unity. Maybe I'll try some other things... with it more.

I also made this, which is pretty cool:

Trust me, you won't be able to guess what the game is about from this gif.

[The CRT shader you see is from here].

For the record, I blame exams for being late. Alright? Not E3. Got it?
All right.

With that out of the way, let’s figure out where I am. Since last week I’ve gotten far more story done, gotten a pretty good idea of my entire story structure, and how it develops. I’m still missing around 40 % of the raw writing (rough estimate), and then a ton of editing, and implementing all of it (more on that later).

I have done far less actual programming this week, since I’ve been mainly focusing on story, but I did do some smarter ways of doing my triggering of new dialogue elements, since I realized I had done it in a completely idiotic way before. Other than that I’ve gotten a few more effects I’m going to tease a little bit:

GLITCH! Glitch effects from this guy: https://github.com/staffantan/unityglitch (It's awesome :D)

I don’t have that much I want to share about the actual story, since I want to keep it fairly spoiler free, but let’s see what you can make of this image: 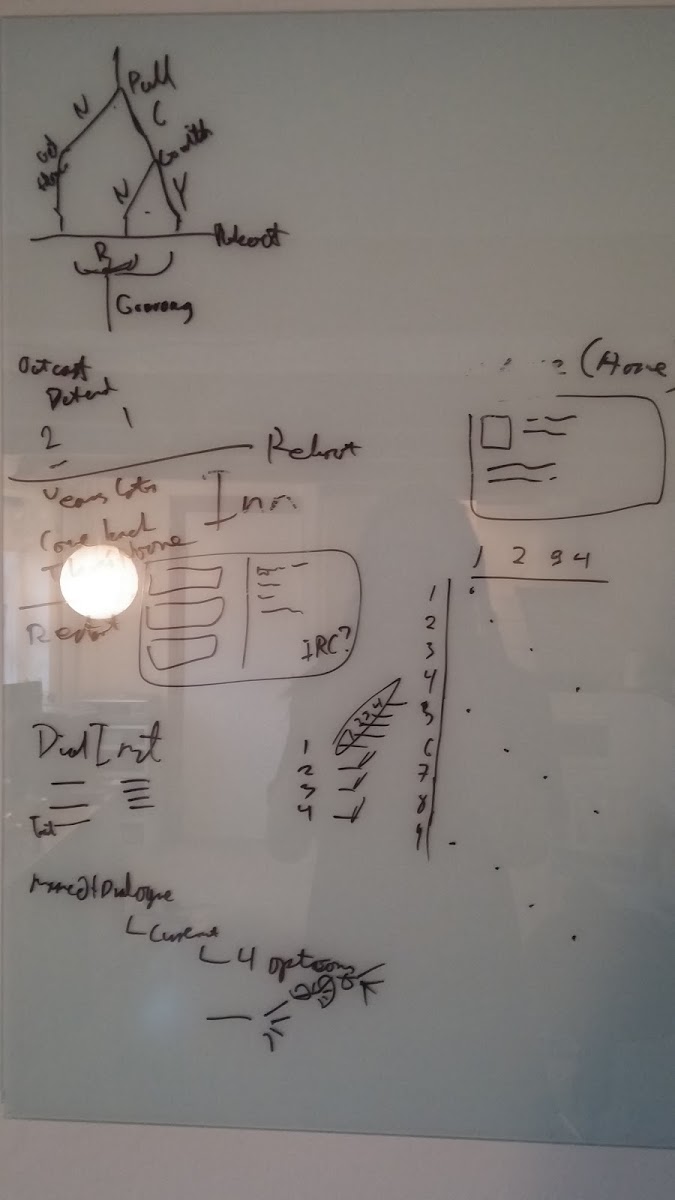 That make sense? No?

Beware that this is just early sketches, and most of this has already changed in some way—but you might be able to suss out a detail or two.

I do want to share a little more, though, so here are a few of my character bios, all written through the eyes of the main character. Keep in mind these are all subject to change:

I'm just me, really. What's there to know?
I'm kind of short, brown stingy hair that never looks right, got a few freckles on my right cheek.
And I sound like an idiot whenever I speak. I guess that's it.

Oh yeah, I want to be a cat. But I can't. Because I'm a person. And people don't turn into cats. Not even in Caudden, they say. But hell, who knows what happens in Caudden.

Tall, blond, with fists of made of something fierce.
Had an idea what she wanted to be when she grew up. Now she’s not so sure anymore.
Once told me she would eat a dog if she was hungry enough.
Got an penchant for telling people the wrong things at the wrong time.

Might be my best friend. But I don't have a lot of other competitors, so it's an easy fight. She'd probably win a fight against whomever tried, anyway.

She's my mom; she's equally the worst and the best person in the world.

Dyes leather and sells it in Caudden every few weeks. Says I'm not allowed to go there.
Lives alone since my father vanished. She doesn't talk about him.
Got an adorable mouth. That I didn't inherit...

Afraid of trolls. I never really understood that.

I bet that just made you more confused, considering the things I’ve shown you otherwise. If so, I hope you’re at least intrigued :)
I'm keeping this short, since I've got other stuff to do (more E3 stuff to see), but it's going forward! See you next time.

Ah, what the hell, here’s one more thing:

Week 3 has been a little light, because I had my final exams to finish. Now I got (almost) the rest of the month to finish, though, so next week will be good.

I’ve spent most of this week implementing the story (that I wrote in Twine/Word) into Unity, which took a LONG time. Way too long, really, but, for me, it was probably faster than trying to figure out any “smarter” solution. And it was really boring, and breaks a lot if one thing is wrong (yay, hardcoding).

I did finish the story. Kind of. It’s complete-able, but there’s one major branch I haven’t done, and I’m not sure I’ll have time to finish it. It’s the decision between adding more content or polishing what I have. And for a jam game, I’d rather want to polish it a bit and have something cool.

Because right now it needs some serious editing. The story is pretty rough, so that’s what I’ll spend the last week on mostly.
That and getting some sound in, hopefully. Sound is important. And I want it in my game. Okay? Good.

I don’t really have anything else to share; sorry about that, but I think it’s better for me to just keep working for now.

Phew, month’s over, and I managed to deliver something (on time and everything!). It was a little tight there at the end, but it’s up and I’m pretty happy with it, overall.

The game is called “Eravola”. It’s a text-game about an investigation of a curse and about a Sage arriving in a village, and it’s displayed on an old-school CRT-style monitor, with green text on a black backgrounds. I won’t say much more than that. It takes 20-25 minutes to play, so you can just go play it!

I want to talk more in-depth about the whole development but I think I’ll save that for a post-mortem write-up later that’ll be a fair bit longer than this one, I think--and go into spoiler territory. But first I think I need a little distance, and wait to see how it fares in the WAG Challenge.

My splash gif! I don't use photoshop that much, so I'm quite surprised how well this turned out (also, I cheated and just used Unity to animate it, but whatever xD)

My final week has been a lot of editing, and fine-tuning of values, like the screen glitches, etc.

I found out, about three days before delivery that my game was too long. The WAG guidelines advise a length of 10-20 minutes, and say that the judges won’t play any longer than 20 minutes. My playtests took around 30. That was a bit of a problem, since the ending is pretty important to the experience, so I really wanted the judges (and everyone else!) to see it. So I got into panic-mode and started cutting stuff down significantly. This unfortunately meant that I cut away one of my only branches I had in the story, but since it was mostly superfluous, it was better to cut to the chase in that section.However, even after quite a bit of cutting, I still don’t think I made it to the sure 20 minutes in a playthrough, but I hope (crosses fingers) that the judges will at least get to a specific point that’s pretty crucial. If not, then I can’t do anything about it now. The rest of the story should still be strong enough by itself, hopefully.

Another element I spent a lot of time on in the end was implementing sound. I got a friend to help me getting the sounds (Thank you, Mads! :D) and implemented them throughout the week. I’m quite happy with how the audio-side turned out, has a right amount of tension and ambiguity, which I was going for, and together with the visuals and the text, I feel they form a really strong atmosphere.

But please, try the game out and tell me what you think! Any kind of feedback is appreciated!