Here’s a thing about me: I, generally, don’t like parties. You know, the large social gatherings that involve drinking and stuff (not the other kinda party, am A-OK with those).
Too much noise, too many people, music’s too loud, way too much for my social anxiety to freak out over, and not enough room to sit and… talk or think.

But I just popped back into a replay of The Witcher 3 and found myself upon a scene I remembered fondly, and decided to replay it. And that made me realize something strange I’ve known for a while:
I really like parties in video games.
Not just like, too. They’re often something I look forward to. I get excited whenever there is one. I want to engage with it. I want to replay it.
This specific scene was the Vegelbud party with Triss in Novigrad for those who’ve played The Witcher 3, but there are many others in both that series and other games (the Dragon Age Inquisition one standing out as my highlight of that game), and I was struck by this odd discrepancy: Why do I like this so much in games, when I dislike it in reality?

Now, granted, I have my share of grievances with the “virtual” in the title, so I’ll instead call them “Video Game Parties”.

I started thinking about this, and came up with some reasons. And while some of them seem obvious, I think they’re worth listing to get a sense of the psychology that goes on here.

1.There’s no social anxiety in a video game.
It doesn’t matter that I don’t want to talk to people I don’t know in a video game, because in there I’m not playing as me, I’m not actually forced to belay or reveal myself there, but rather, act out within the game’s parameters. I can’t do anything that’ll make me feel ashamed. Maybe the character, but never me. I am always safe, and thus, there’s nothing to feel anxious over.

2.Nothing is expected of me.
Related to the above, I can do what I want, be myself, be this character, do whatever, and no one will mind either way.

3.There’s no alcohol.
Yay, finally a time when my not drinking really doesn’t matter! You can say it doesn’t in a real party, you can believe that, and even I try to believe that to some extent, but we’d both be fooling ourselves.
I can even get drunk in a video game without it mattering at all!

4.I am, ultimately, actually, alone.
Because there’s the real truth, innit?
I’m not trying to fool anyone and say that what happens in the game replaces a real party. It’s exactly because it doesn’t that it works. I am alone, and that is ultimately a happy place for me.

5.I want to be the kind of person that enjoys it.
It’s similar to wanting to be better at talking to people, or wanting to be the hero: It’s a fantasy, and games allow us to fulfil fantasies.
I would love to get rid of all that anxiety and just give in to it all, and enjoy shit or whatever the all hell, and I have gotten better at it, but I’m still nowhere near the point where I’m looking forward to most parties before they exist.
Any time a party opportunity opens up in a game, I’m giddy. Because then, I can pretend to enjoy it all for a spell, and not lose any part of myself in the meantime. 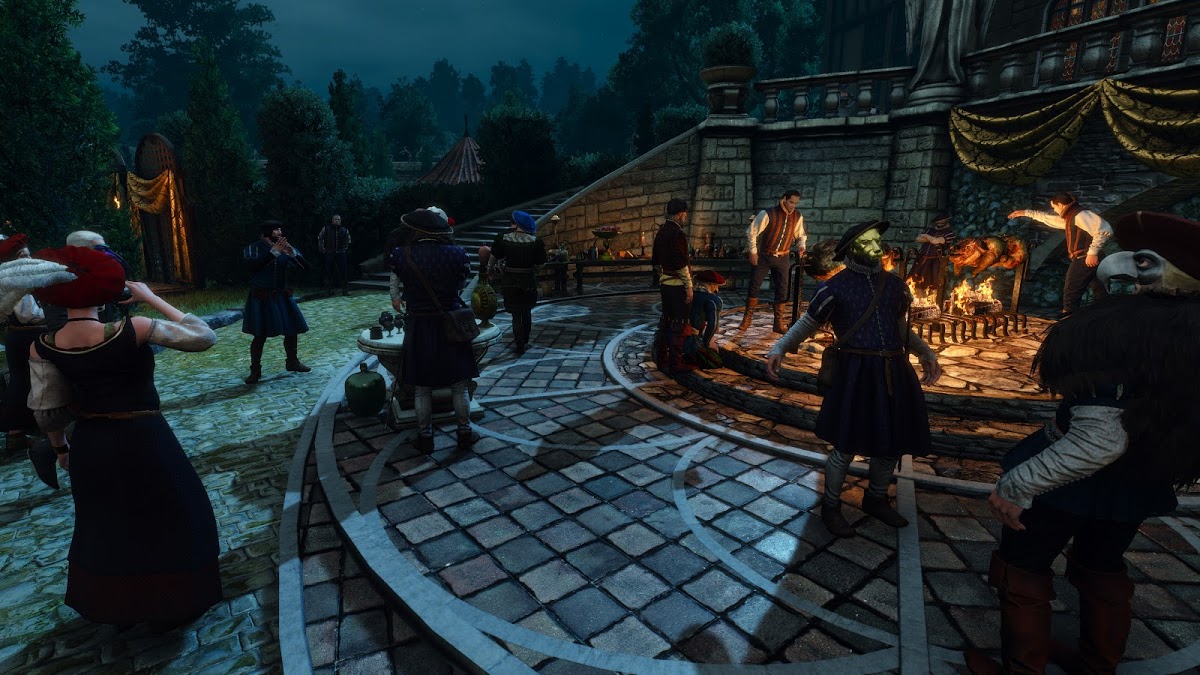 All of this is pretty straight forward, and you could perhaps say there’s a pretty simple answer:
They aren’t real parties.
In games, they fulfill a very different purpose than they do in the real world: They’re plot points, gathering spots, where many important characters are suddenly in the same room, or a chance to mimic a glamorous or fascinating part of life many of us don’t partake in or they’re a break in between the action or just a simple pastime.
But there are similarities to real parties in that they are (and a lot of video games are) a chance for people to let loose, to forget the trials of the day, to think about something else and just enjoy ourselves for a while.
But the key difference is this: In real parties, you could do something you’ve never done before. You could end up somewhere entirely different. You could get so drunk you don’t remember what happened. You could discover something new you didn't know existed. You could meet someone else you like. You could have insane, ridiculous stories because you didn’t think and couldn’t walk straight and just did things.

Here’s another thing about me: I don’t have a lot of those types of stories. I haven’t done a lot of ridiculous shit at parties, because well… 1. I don’t drink, 2. I haven’t let myself let loose in the way that often requires (halfway because of 1, halfway because of 3. I have social anxiety: I think about myself from the outside way too much).

And that feels a bit empty when other people are sharing them like they share war-stories at lunch. I have a few, and mostly some that happened to other people than me, but really, I don’t have any.

Do I miss that? Sure.
But also, fuck it. I don’t know, man. I don’t drink for the same reason I don’t smoke or do bungee-jumping.
Because I don’t miss it. I find I get enough of what I want out of life without it, so why would I start (Actually, the reasons I don’t drink is a bit more complicated… too much for this little article.)

Also, look at me starting talking about parties and ending up talking about drinking. They’re so connected I’m about to go vomit.
Excuse me while I go play a video game.

(PS: caveat because I’m also me and hate superlative statements: I don’t hate all parties. I’ve been at parties I enjoyed. I don’t think they’re bad. I just generally find that I enjoy small gatherings with friends. I know enough about the world to know there’s plenty of people who can relate to that.)