I know I played this before. And this is a direct continuation of that, so if you haven’t go read that one first. It should be fairly fast.


So, where I left off, I was inside the Deku Tree, fumbling around plants and spiders. I just managed to get down to the basement level and I now stand there without remembering any of the controls…

You see, I’m playing a Nintendo 64 emulated game with an Xbox 360 controller, so the colors it so nicely shows up in the right are… wrong. And I don’t remember what I mapped them to. But it’s ok, the carnivorous plant is just getting a few free bites in while I throw seeds at it instead of hitting it with my sword. It’s gotta eat too, no? 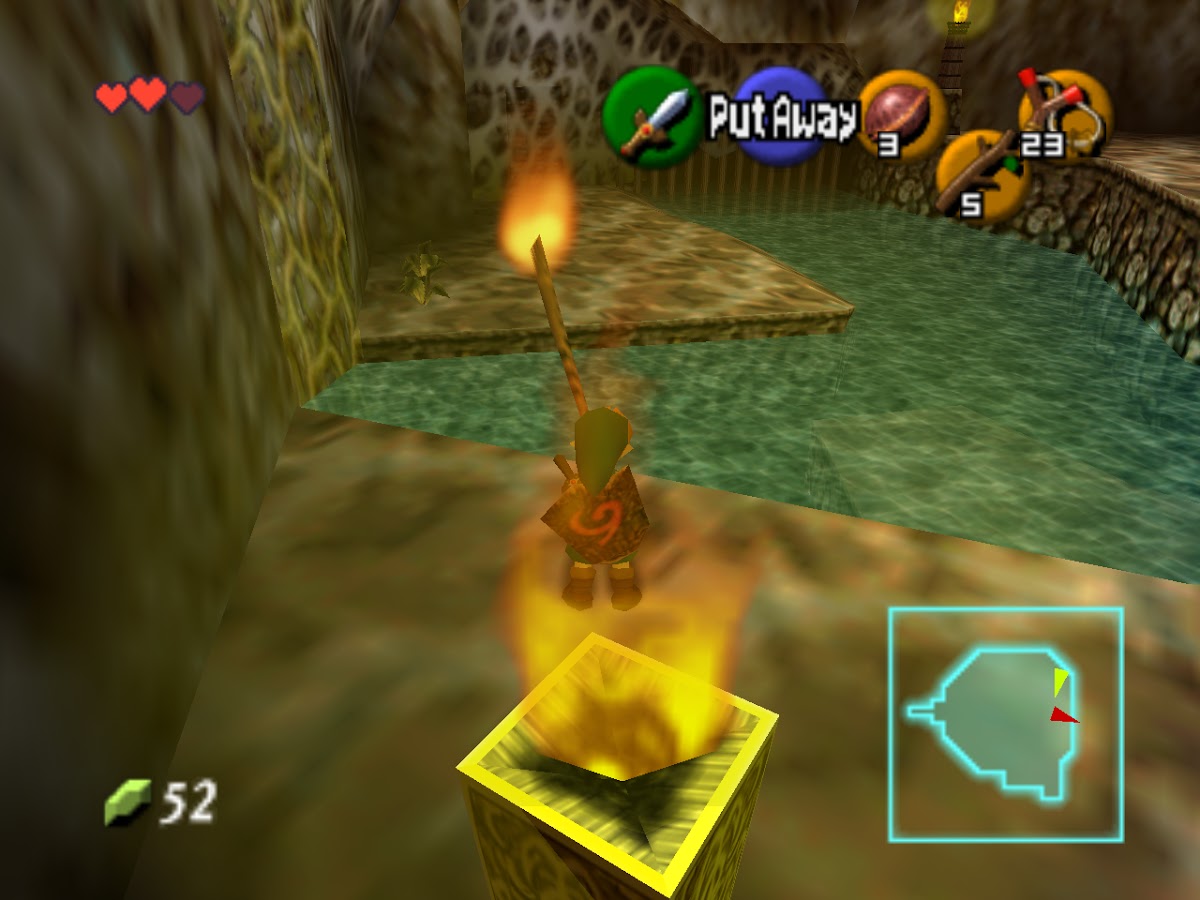 Finally getting my bearings, I realize I just gotta carry a burning stick over the water to burn the spiderwebs. (Trust me, that makes a lot of sense. Don’t worry about it.)

Inside the next room, there’s an annoying little nut shooter thing I defeat, but just before I destroy it, it yells and tells me that if I spare it, it’s got the secret for how to defeat its brothers. It’s not like I have a choice, but now I know the order to do that is 2-3-1.
Ok? Ok. 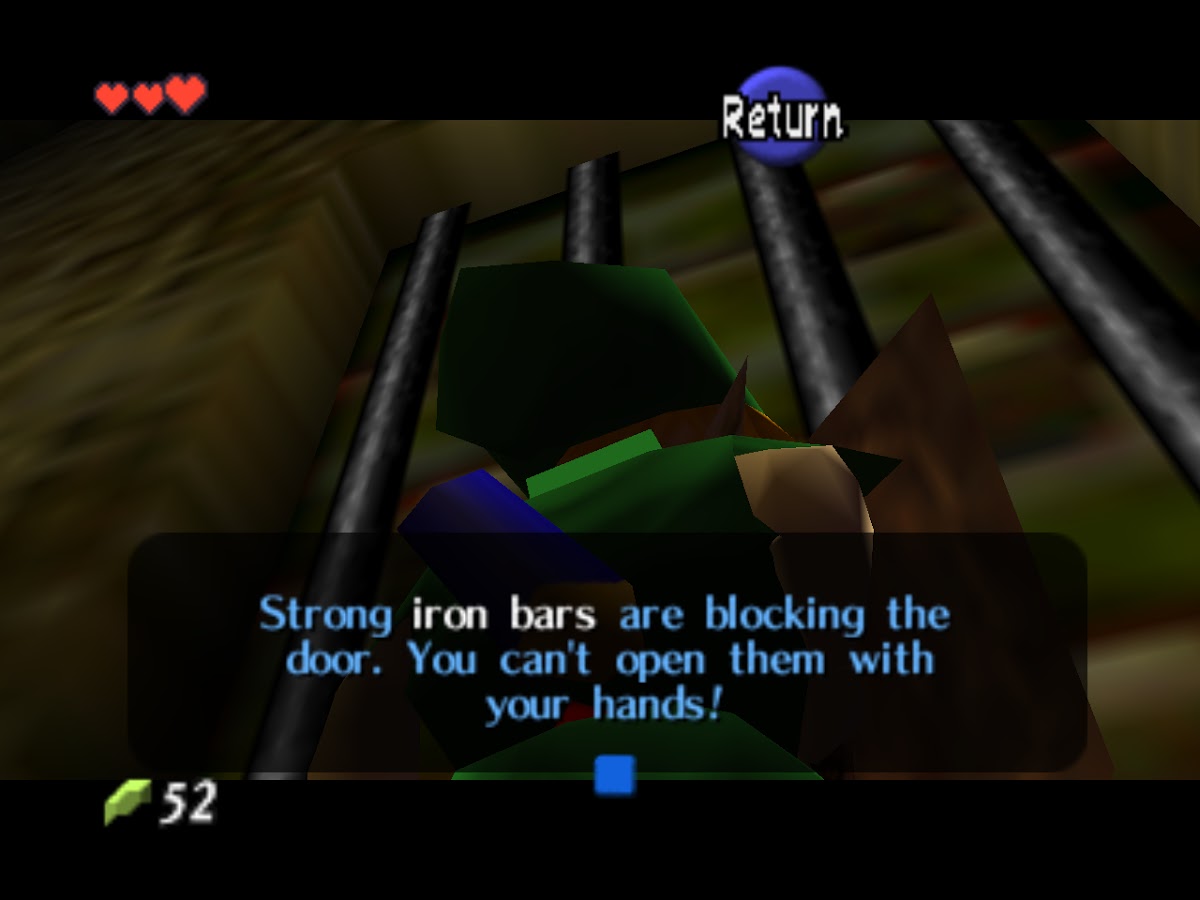 Sorry I didn't get an image of the actual eye. Thought I had but no. It's a grey stone eye.

I stumble around for a bit, trying to figure out what I can do with the eye, before finding that nothing works and I go up and down the tree again to see if I missed something. 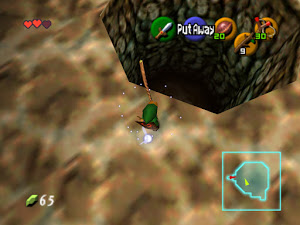 It can only be safe to jump down there!

Through the next couple of rooms, it teaches me I can dive underwater and push blocks (You don’t say?).
I circle around underground until I gain access to a deep, dark hole.
Naturally, I jump straight down.

Ah, and there we have three of those nut shooter dudes. I’m guessing those are the brothers. So, we take the second one out first, then the third, then the first, and lo and behold, it worked.
It’s positively baffled that I knew the secret. It’s so baffled even, that it tells me the secret to defeating “Queen Gohma” (The Boss, I’m guessing).
And the secret: 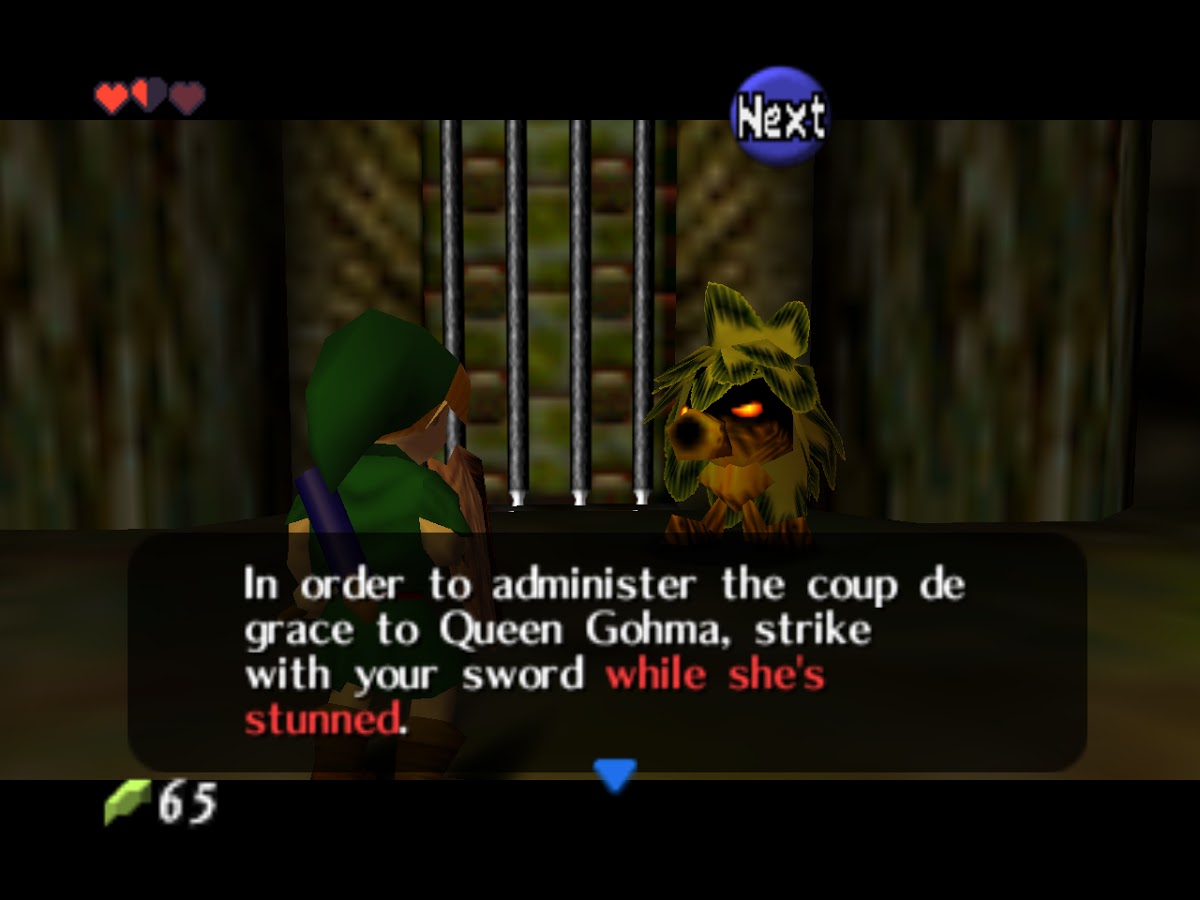 However(!), plot twist!
That’s actually not what happens here!
Instead…
It’s got a big, red, glowing eye. 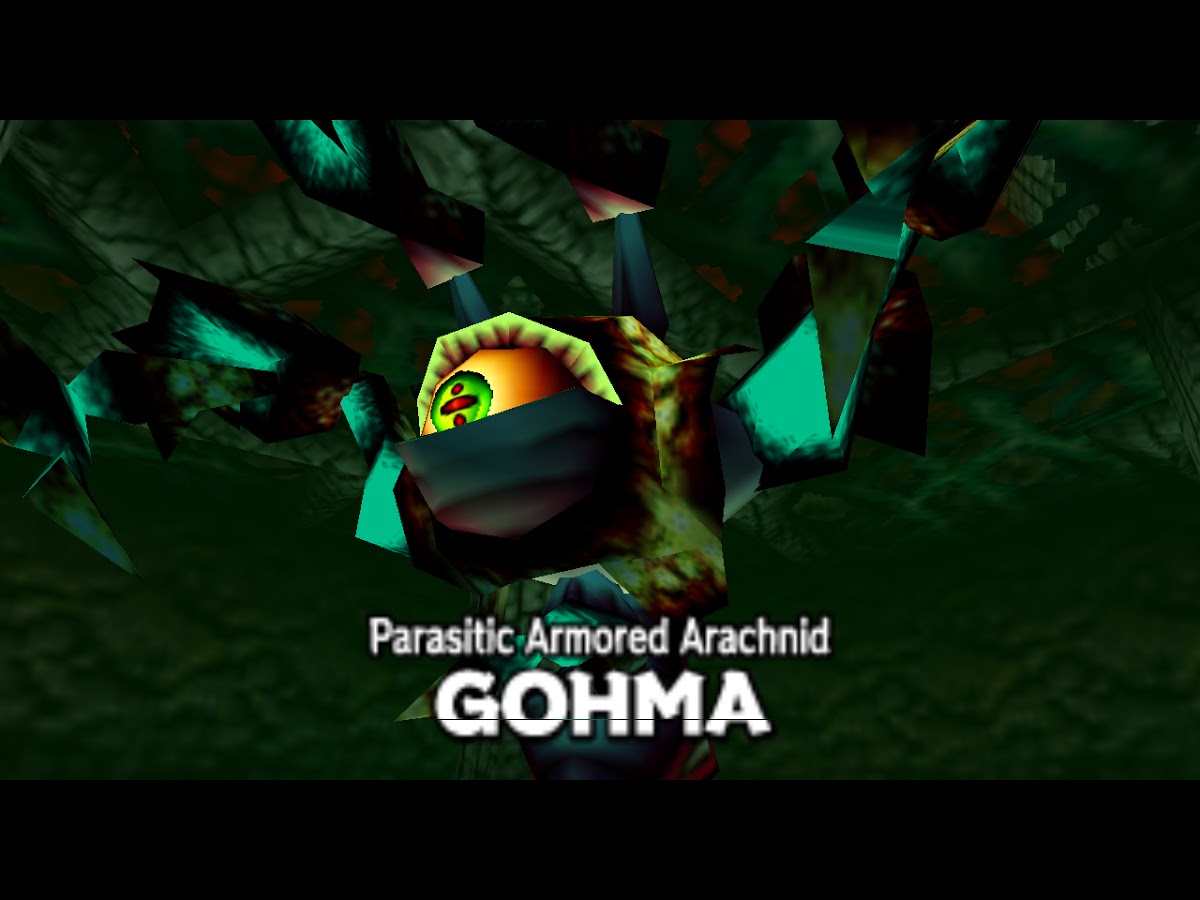 Guess how you stun it?

You use the slingshot (your new tool) to hit the big glowing eye (the weak spot) in order to stun it (so you can hit it with your sword).

Use everything you have learned!
Repeat. Now you’re playing video games.

I defeat the boss (because I have to) and get out of the tree!
And then the Deku Tree lays it on thick with the lore.

Let me try to recap: 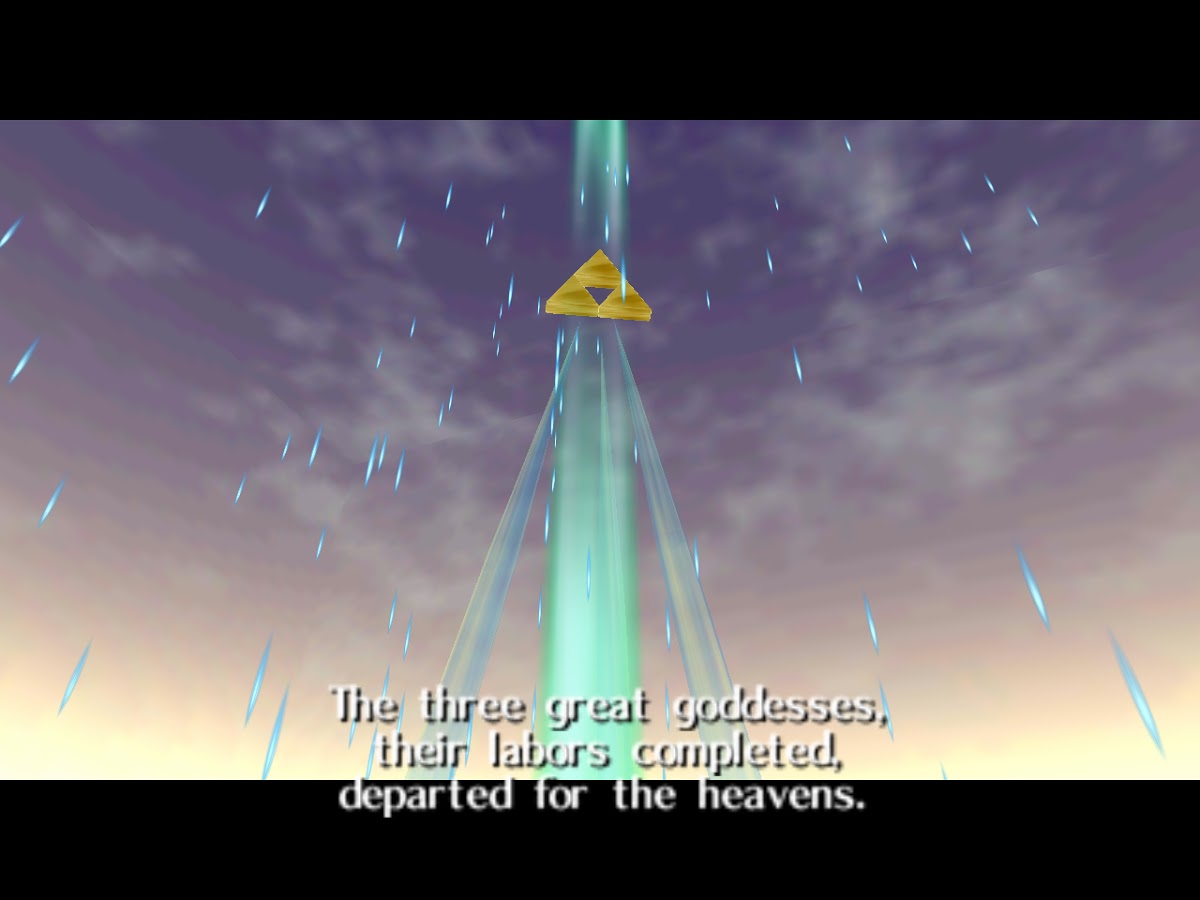 It tells me that there was a Desert Man (capitalization my own, but seriously, the way it talked about it made the words Desert Man seem very important), cursed the Deku Tree, and is now searching for the almighty “Triforce”, which three goddesses left in the “Sacred Realm”, and this guy is now trying to find them.

He’s apparently very evil so Deku Tree (who’s OBVIOUSLY good) doesn’t want that to happen, so it sends Link (me) out to stop him.

So, first order of business: Get to “Hyrule Castle”. And find the “Princess of Destiny”.

I wonder who that is.

After, the Deku Tree dies to the curse, and I leave the forest where I have spent my entire life, without much regret.
Link seems to be a pretty stoic dude (child? fairy?). 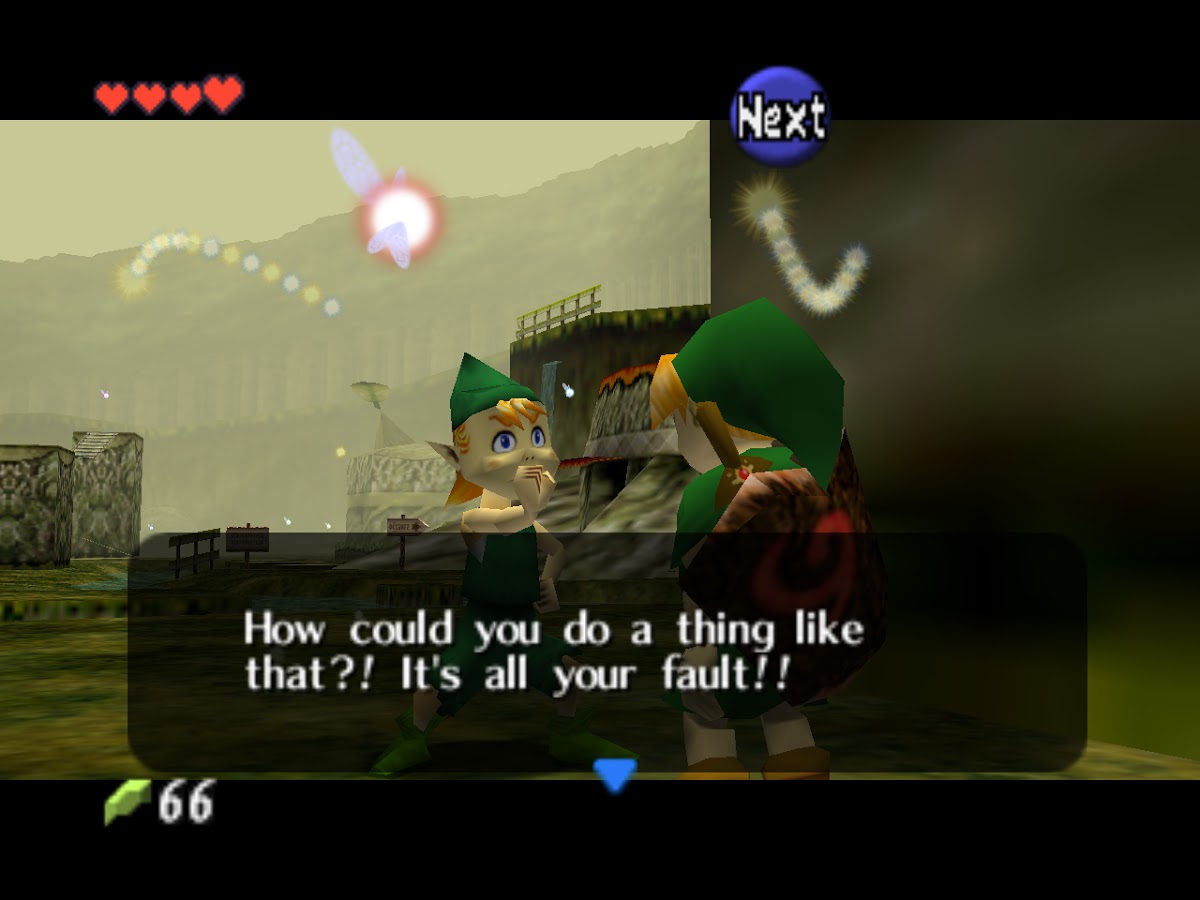 The notion of "This is all your fault" is, surprisingly, also a Video Game thing. Don't think the game's intentionally being that meta, though.

However, just before I leave, my lady friend (the only one with green hair, so she’s recognizable) finds me and gives me an Ocarina. 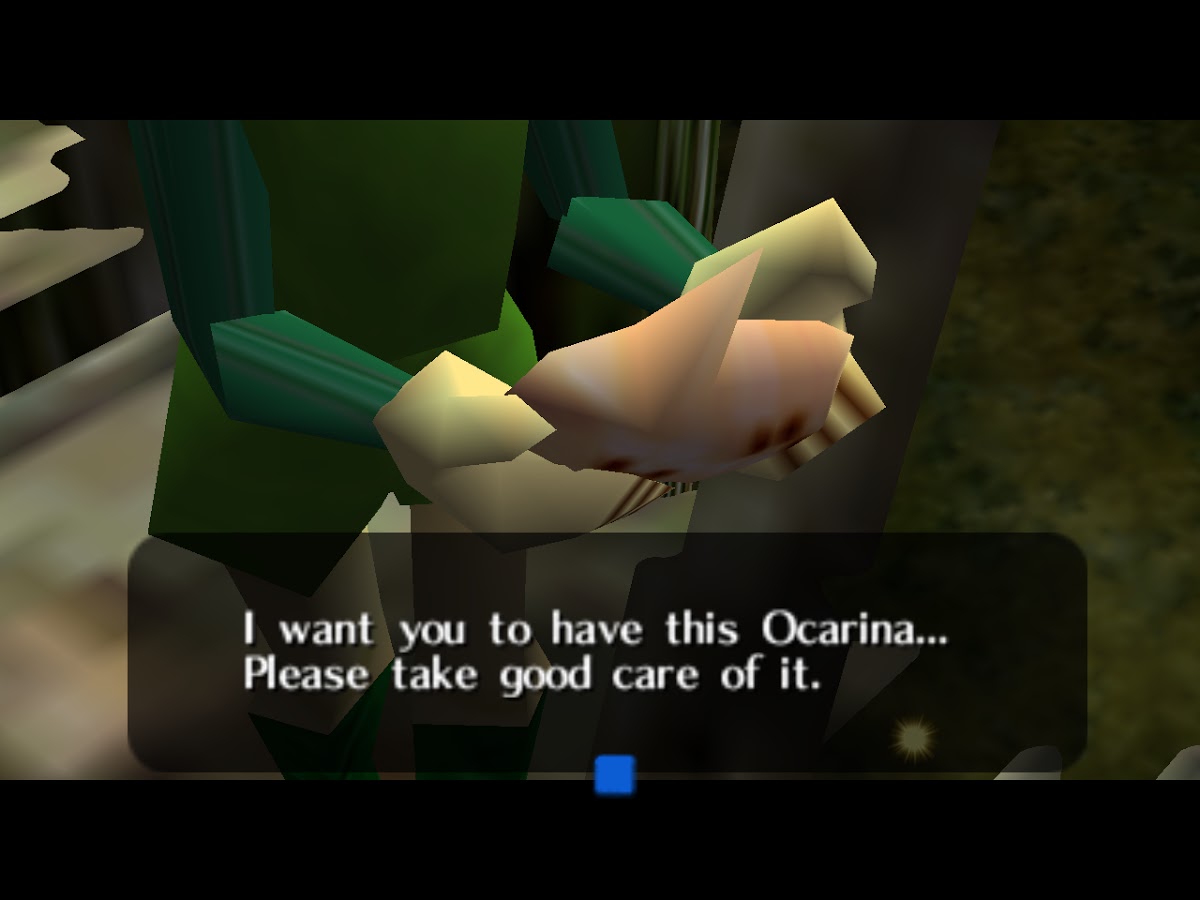 No idea what to use it for yet, but if the game’s title is to be believed, this thing is kinda important.

So onwards to the Castle! 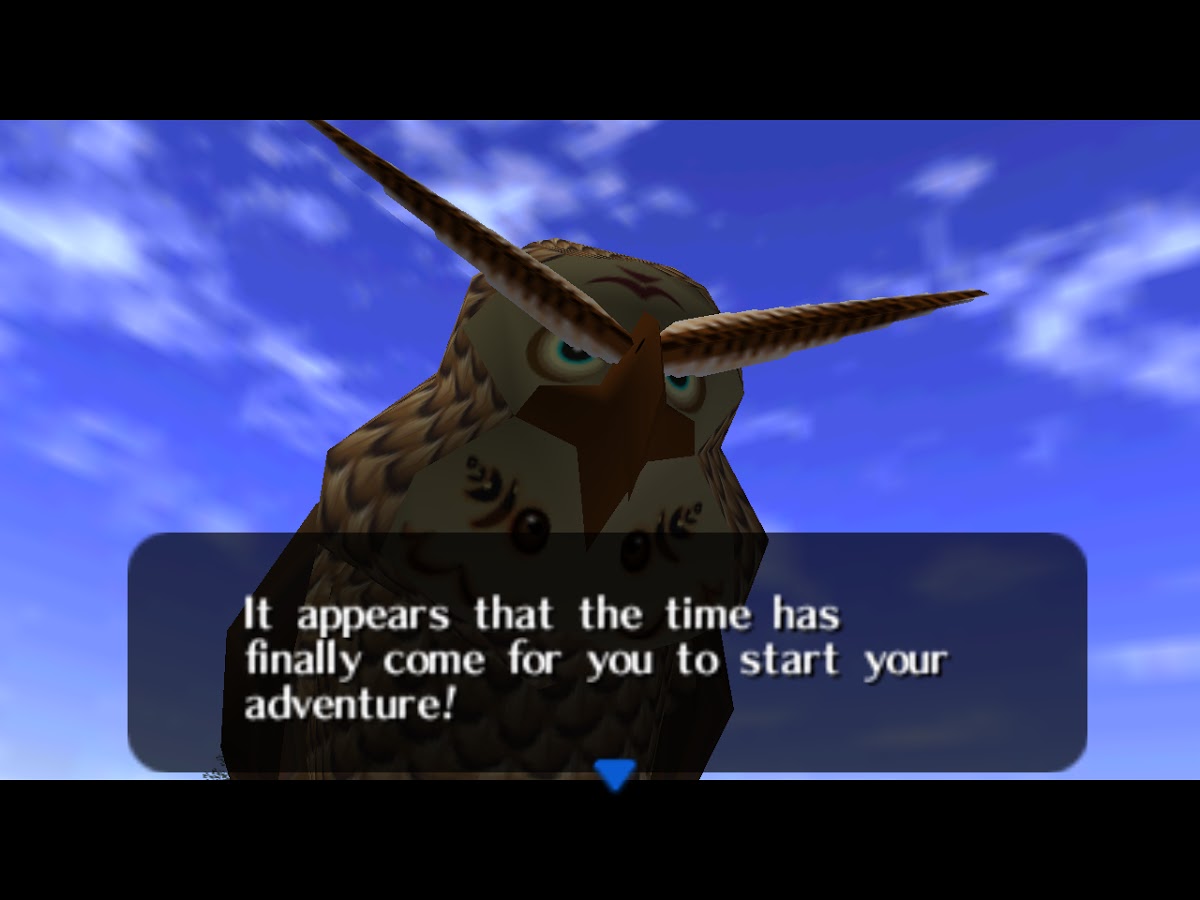 Sorry if this piece comes off as a little... bashing on the game. I by no means intended to fault the game for using video game tropes a lot. I'm fully aware that this game in many cases started (or popularized) a lot of these tropes. So this is more of an homage to the fact that this game did so many things unbelievably well.