This is written with two audiences in mind: People who don’t play video games and people who’ve played Outer Wilds. For you in the first group, feel free to read it to get a glimpse into an experience you would otherwise never have.

If you play video games, I’d advise to play the game first, and not read this until you know at least what the moon in reference is. This will spoil one core mechanic in Outer Wilds. It is not an endgame reveal or a massive story spoiler, but everything in this game is an unknown when you start it (and should be!) so everything is effectively a spoiler.

If you have no idea what’s going on and the idea of a love letter to a moon intrigues you, please read on. 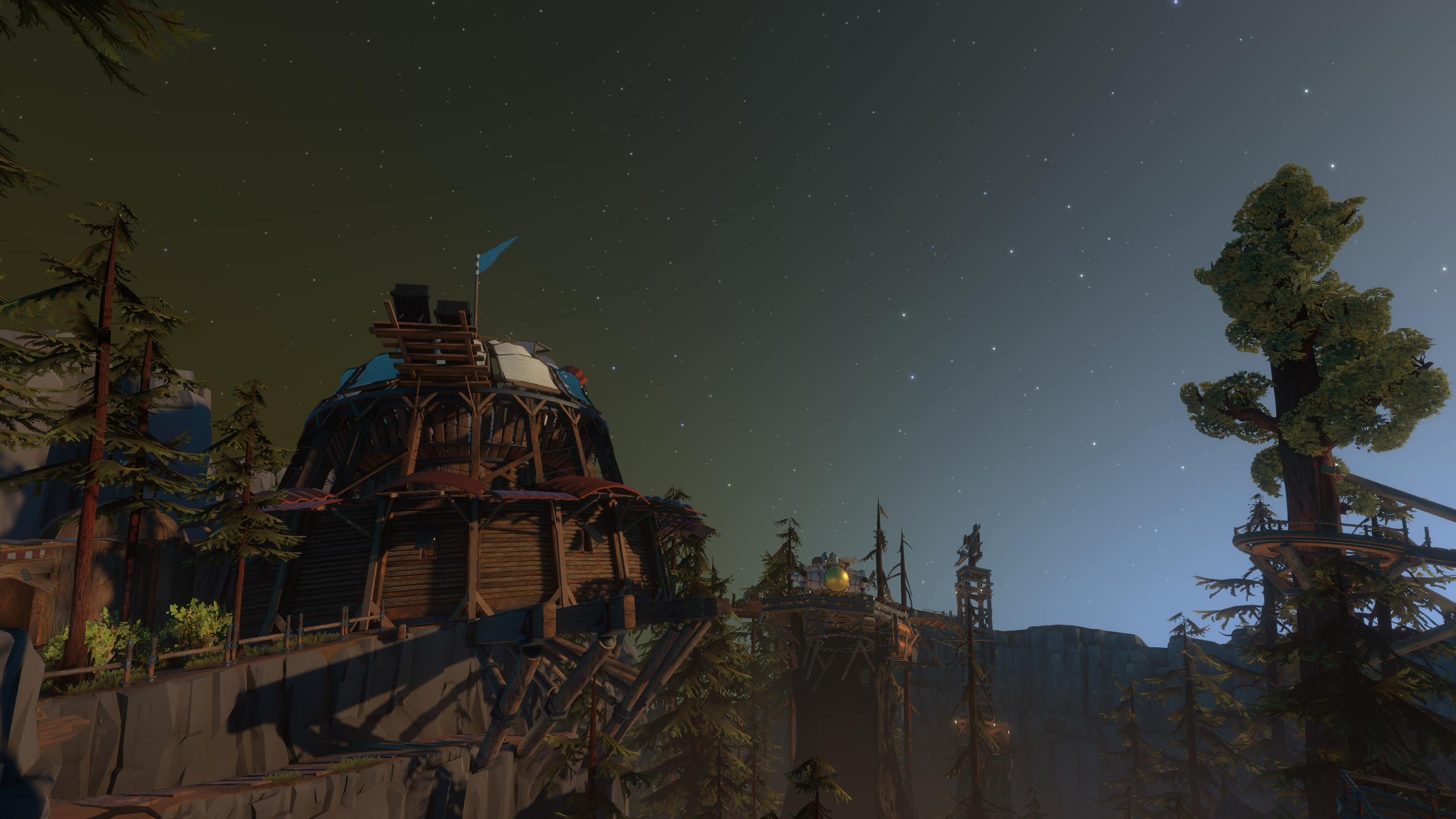 In the museum in the introduction of Outer Wilds, there is a rock. It is, upon inspection, an ordinary rock. It’s black, a little weirdly shaped, but it’s a rock.
The plaque next to it says the rock is moving, that it reacts to observation. Which tickles curiosity, so you begin looking around.
And you looking away from it, and look back. And the rock has moved.
It is in a different place now. You look away, look back, the rock has moved again. Maybe back to where it was before.
It feels like a fluke. It feels silly. Gimmicky. Haha, the rock moves. Cute. Creepy.
But it’s in a museum, so you discard it quickly, like most things in a museum, to move on to the next exhibit. It is no more profound than the model of a sun, slowly expanding.

You go out and explore space. You see planets out there in the distance. Wild, odd things, with shapes you can’t describe, with evocative names like “Dark Bramble” and “Ember Twin”. It’s all out there, in the darkness, and you can explore it all. Yet, you have all the time in the world (don’t you?), so you take your time, and explore around, first close, then moving out wherever strikes your fancy.
The other planets are just dots for now. Orbits in the sky. 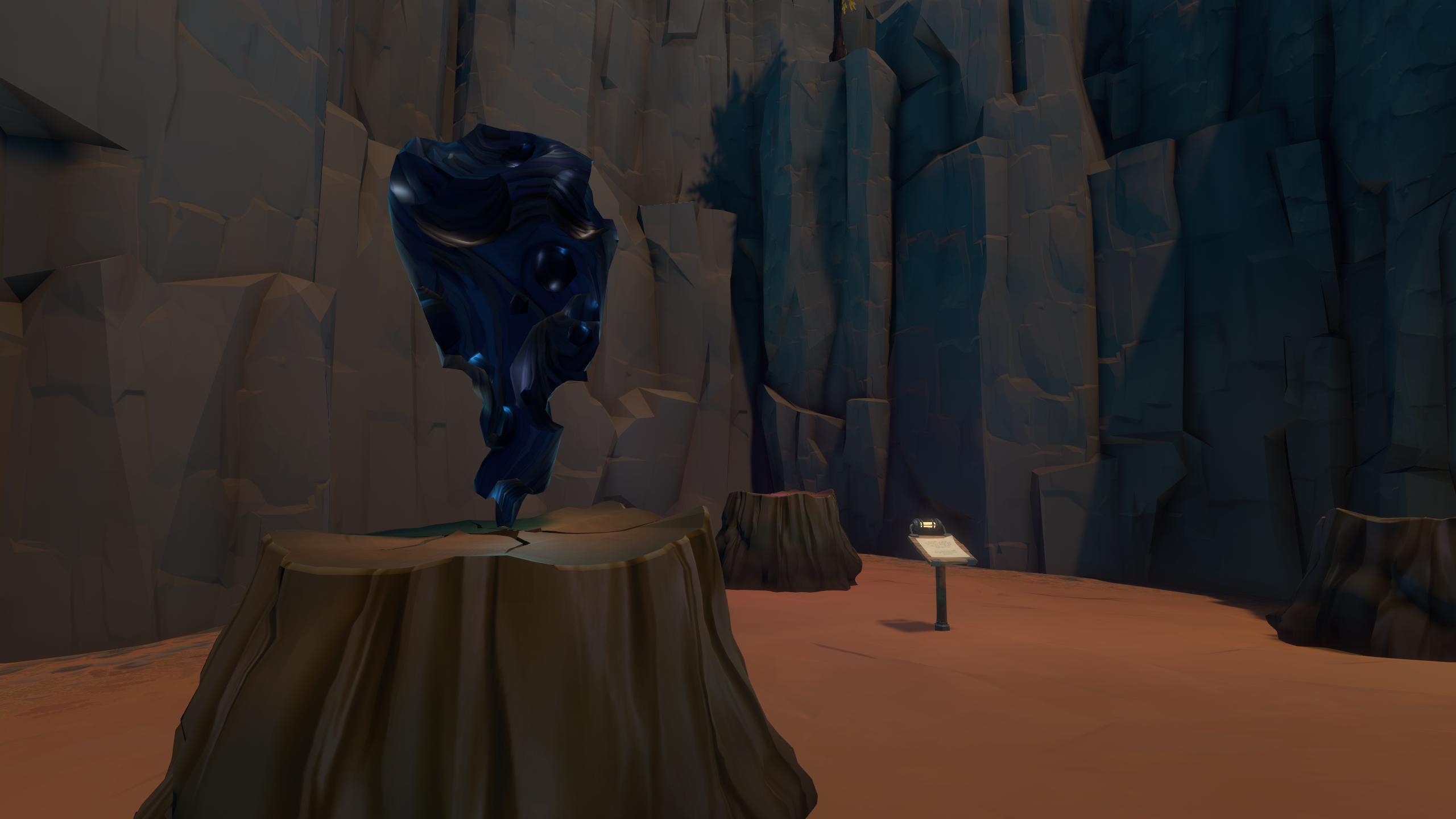 A little later, you find a bigger rock. With the same strange, black formations. Maybe on Brittle Hollow. That’s where I found my first one. The formations are familiar enough, but it’s so huge you can’t quite believe that it will do what you think. You inspect it, maybe even jetpack on top of it, and it’s just a rock.
Then you look away and look back, and there is no rock. Uncertain, you look around until you find it. The same rock, but it’s somewhere else.
You’ve probably learned about your signalscope by now, your trusty guide that can listen to faraway sounds so you may even pull it out and listen to the rock.
And you listen to the stone, as it vibrates a haunting tone.
“Quantum Fluctuations.”
What does that mean?

You look up more, either in search of the next place to fly to, or just as you’re wandering, pondering on the last textual exchange between two long-dead people. And you see more rocks up there in the sky. Some of them have names you begin to recognize. You might see the comet, too. You might see something else. You might see another rock, that is so inconsequential at first, that you pay it no attention.
It is just another rock in the heavens, orbiting the sun. It is spinning like all the others, in the clockwork sky. It is there for a reason, you’re sure. But the reason is uncertain.
You probably don’t notice, the first time, that the next time you look, it is somewhere else.

You may strike the thought that you hadn’t seen Giant’s Deep had a moon before now. Maybe it was just behind the planet the other times you looked. You might see it around Brittle Hollow, and think that the volcano has a friend you didn’t notice.
It doesn’t feel strange. Nothing feels strange, quickly, in a place where black holes are inside planets and the statues move to look at you. It is just another part of the sky, that you are trying to understand.

It is not until later, when you find mentions of a “Wandering Moon”. A “Quantum Moon”. Your travels have brought you to other quantum phenomena; the rock from before, now confirmed to be a quantum object. You find a grove on your home planet, where the trees shift and aren’t where they were when you look away. It feels eerie. The quantum fluctuations you listen to no longer feel like a guide, the way the music of your friends is, but an ever-presence, a constant hollow tune, as if the universe itself is singing.

“Quantum Moon”. That is a strong series of words. An entire moon. Could it be real? Could it be…
And then you see it again.
And then you go "oh my god this game is about to flip my shit isn't it." 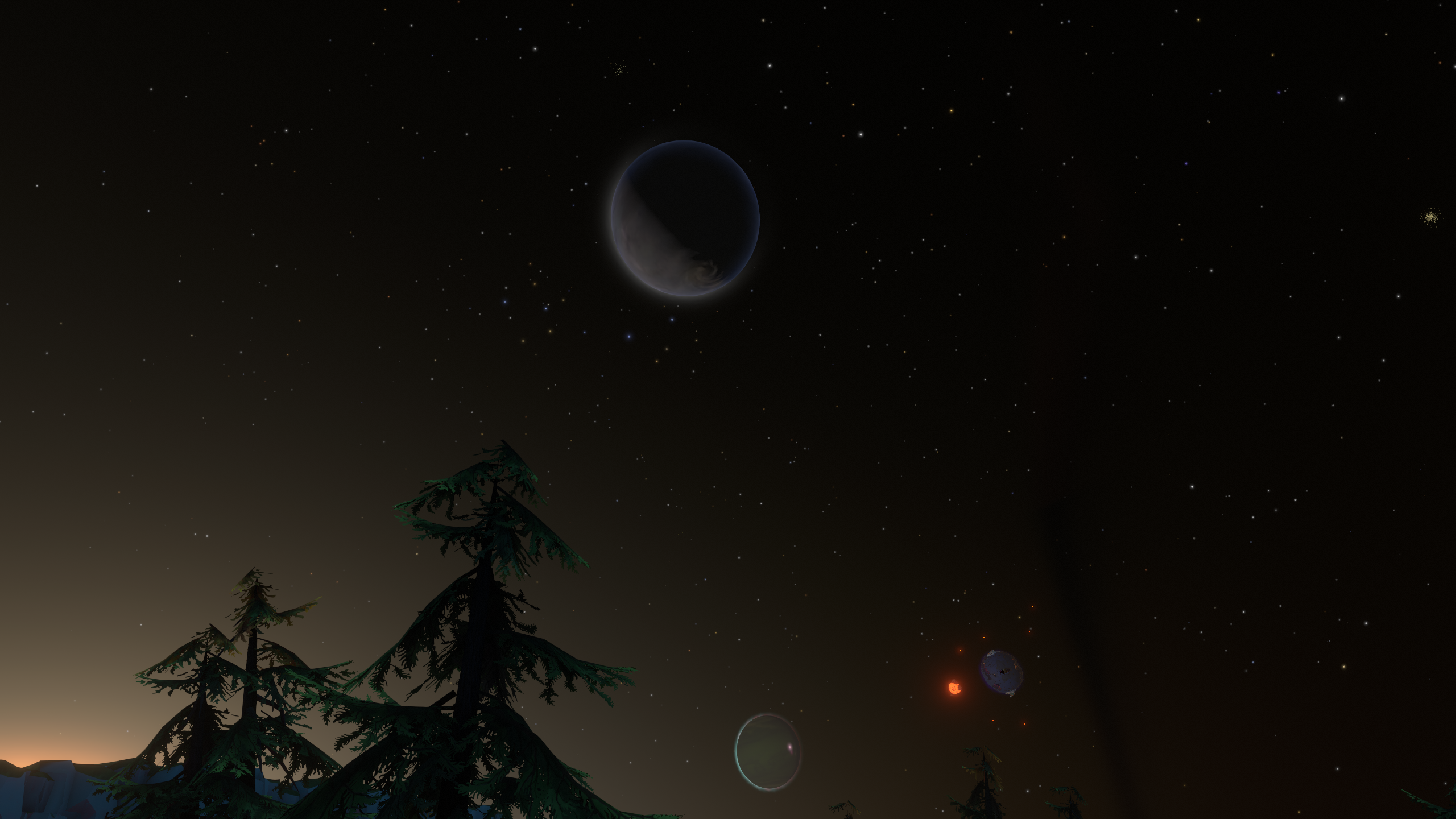 With this realization, you confirm two things you may have suspected already. One, the grey rock is indeed quantum. It only stays in place when observed, and the moment we lose eye contact with it, it falters out of view and exists nowhere and everywhere until we find it again.

But the second realization, that it is a “moon” is just as important. It is accompanying another planet, always. It is never alone, always existing in relation to another celestial being, out of which you are slowly becoming familiar with each. It is, every time, you see it, somewhere you know. Either where you are currently, as you’re digging through ruins for clues on how to enter an observatory, or far away, across the solar system, orbiting your home, keeping it company while you are away.

And it will take another long while before you land on it. You may try, you may think that it would be a fun venture, but is immediately thwarted by its inexorable design—it disappears when you try to penetrate its atmosphere. It is there when you fly into it, and gone when you should be in it. But no matter. If this world has taught you anything, it is that the inability to do something is not contingent on you failing to do it; but on failing to understand it.
So you go, content with the fact that the Quantum Moon is something you just don’t understand yet.

And all the while, it stays there, hovering over you, hovering away from you. It is there when you least expect it, and it is there when you most expect it.
It may be taunting you, it may be smiling at you, it may be expectant of you, but it says nothing and demands nothing. It waits, cruising through space, as if it understands it.
It might disappear for an hour or two, and then come back, suddenly in front of you. 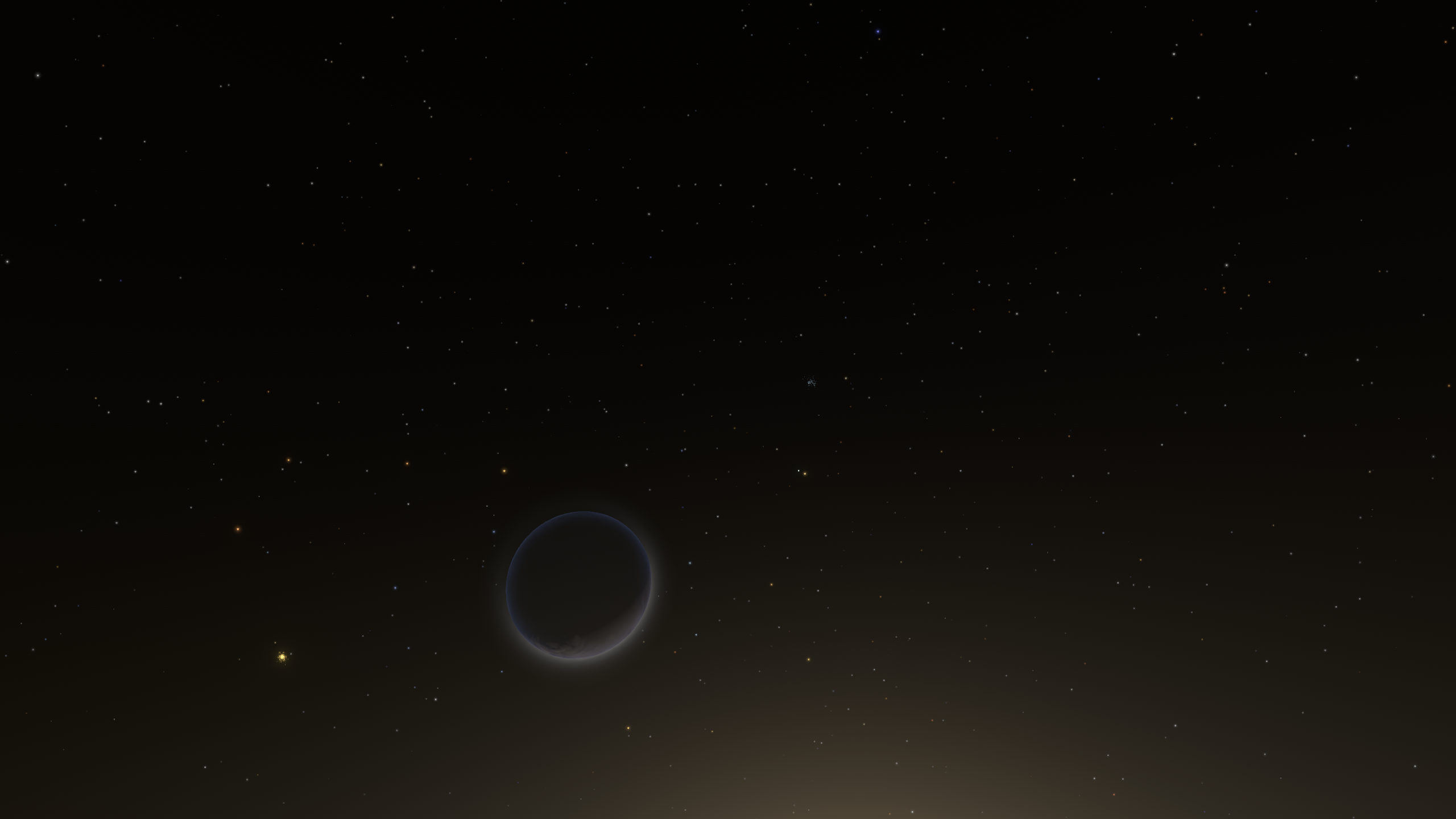 The Quantum Moon is always a surprise visit. You're never sad when is not there, but always happy when it is. It shows up, often while you are off, thinking about the tornadoes at the deep or the mechanics of space travel of an ancient race, and it peeks over the horizon, greeting you in its grey mass.
It is forever a friend, uncaring about your failures, always knowing that you will get to it when you have the time and the knowledge required.

And when you finally land on it (I will not reveal how) these lessons are much repeated. Everything exists as it did outside, everything is as it was, an echo of the worlds it orbits. And you must use everything you know to navigate its strange design, both outside and inside.
The lessons you learn there are valuable and kind and true. It is not the place you will finish your journey, and it is not the place you will start it. But it is a step on the way, a sidestep perhaps to some, but not to you, who saw it all that time ago and found it in an attempt to understand the universe.
It was the constant guest, who was there from the beginning, even if you didn’t see it at the time. You do now, and you welcome it.

It is a moon that only exist when you look at it. It is a wandering friend, a pleasant acquaintance, and a kind soul you feel you’ve always known. It is a Moon, an interstellar object in the sky, belonging to no planet, belonging to everyone.
It is but one aspect of the universe, one speck in a vast system of interlocked parts, of mysteries and riddles, of projects and designs. It is but one piece of rock, and yet, every time it is there, you smile, if just a little bit, that it has once again come to see you. 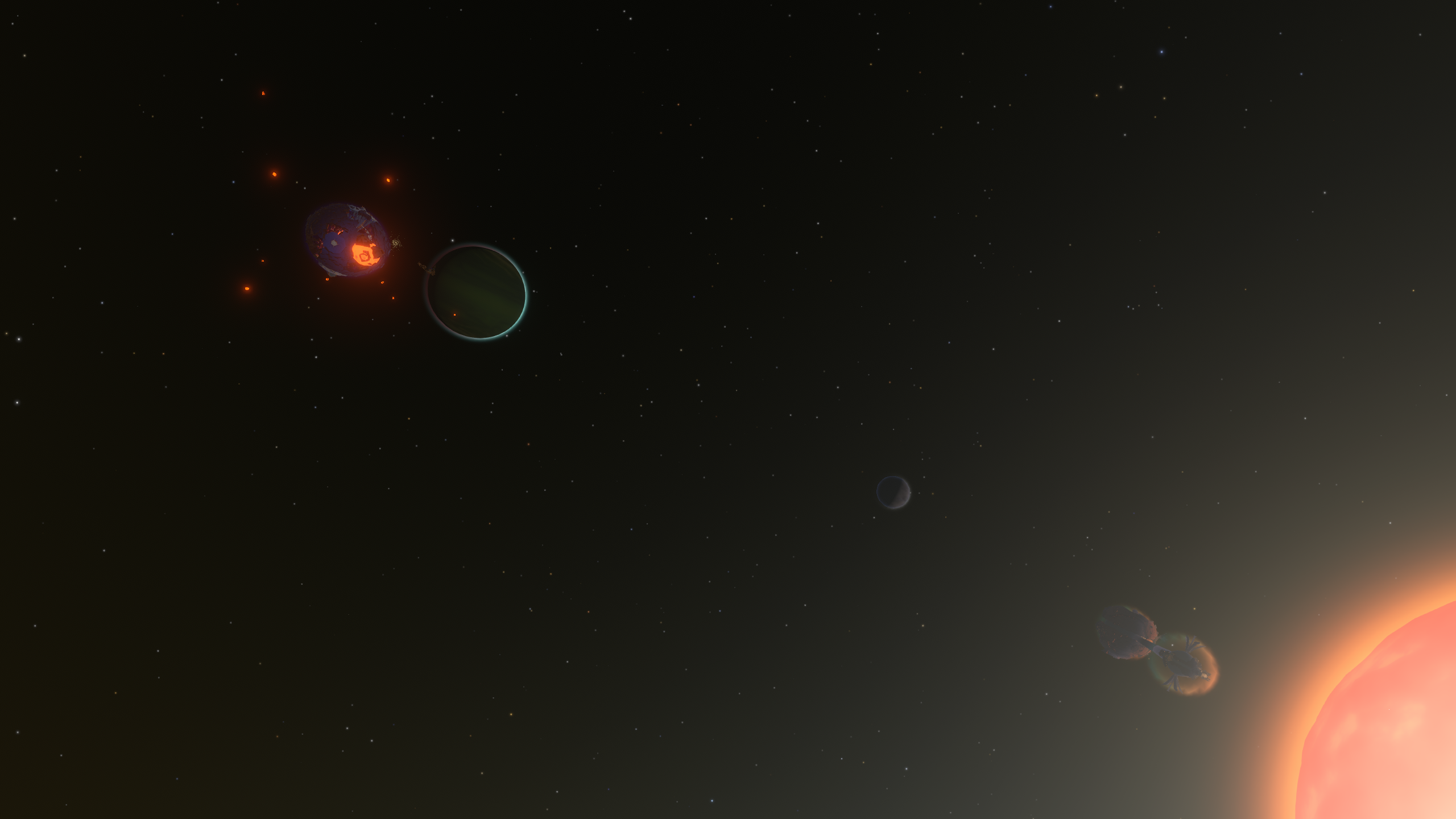 It’s not by talking about the end of the universe as it pertains to all things, but by telling it as if we’re sitting around a campfire, with friends, roasting marshmallows.

That’s what this game is.