I’ve been playing Persona 5 recently. Specifically, the emblazoned, shining “Persona 5 Royal”, which is a full-price release of the game with a lot of extra twinkles and diamonds on top.
I… told myself I wasn’t going to get this at first. Because it’s 80% the same game I played in 2017, and its full price on the same console.
But I did. And now playing it, I’m realizing just how perfect of a game it is right now. And just how well this game sits for me, despite its flaws.

I’ve struggled to articulate why I like this game. I’ve seen a lot of people disappointed with 5 because of its less strong characters, its not as memorable moments or its brasher execution of its themes.
And I don’t disagree with many of their points. But replaying this opening right now has made it clear to me that I might like this game even more so than any of the previous Persona’s, despite those flaws. And especially right now, this game is a perfect accompaniment to the world. The game’s main character made a mistake. On his way home from school he heard a scuffle between a drunk man and a woman, and stepped in to help. Clearly the man was trying to force her into his car. The main character approaches to help her, but the drunk man shouts at him, falls and hits his nose. Then he sues the kid for damages, and the kid gets a charge for assault on his criminal record.

Yeah, the mistake was he tried to help a person getting assaulted. And for his troubles he gets a permanent mark on his criminal record, and sent to a new school on probation, which is where the game starts.

Emil (he doesn’t have a name canonically, but I named him Emil and I’m sticking to it), moves in with Sojiro, a man with an uncertain relationship to his family, who runs a café in one of Tokyo’s backtowns. He makes it very clear that he does not want Emil there. At all. “Don’t cause trouble”, “you’ll be sent straight home if you fuck up”, are things you, the player, are told. He sees you as a problem child, as someone who needs to be kept close and carefully pruned, and if not, you’ll turn “bad”.

Sojiro takes Emil to visit the school, and it’s the same thing. The teacher put in charge of Emil’s class agonizes over it, complains to the principal that he shouldn’t be in her class. Later, we see two teachers badmouthing Emil, saying how they wish he wasn’t there. Rumours spread throughout the school about his criminal record, and every other student shun him and is afraid of him.

This is the mission objective you get for the first few days: 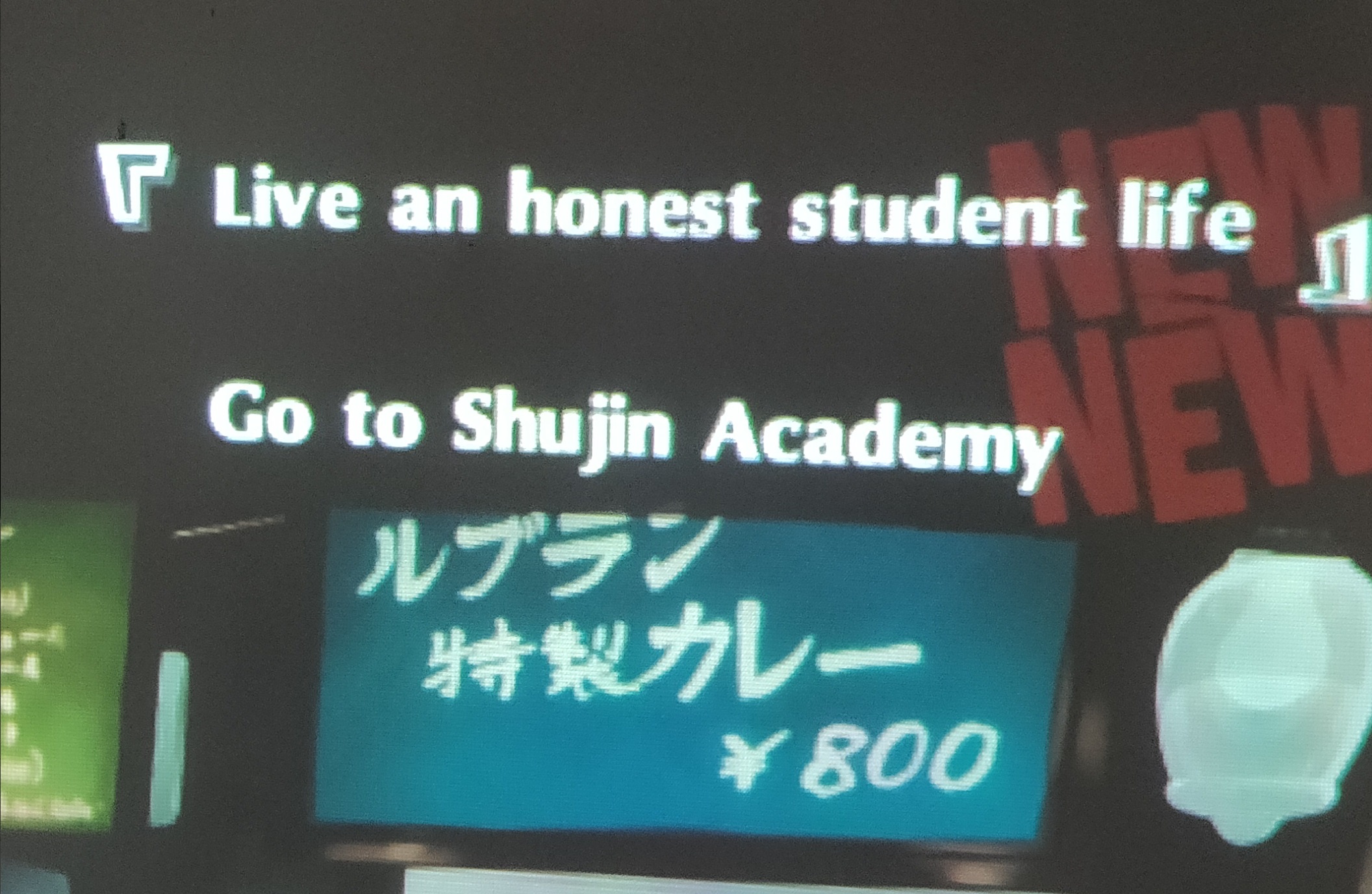 Just live normally. That’s all its asking. One fuck up, and you’re done. Aim for being the quiet kid in the background, and don’t miss.

The school is not an endearing, welcoming place, the way it feels in earlier Persona games. You don’t just feel like the new kid in a new school: You feel like an outcast from the jump. The game shuns the main character for existing, for being there. Teachers tell other students to stay away from you. All because you wanted to help. It feels unfair. 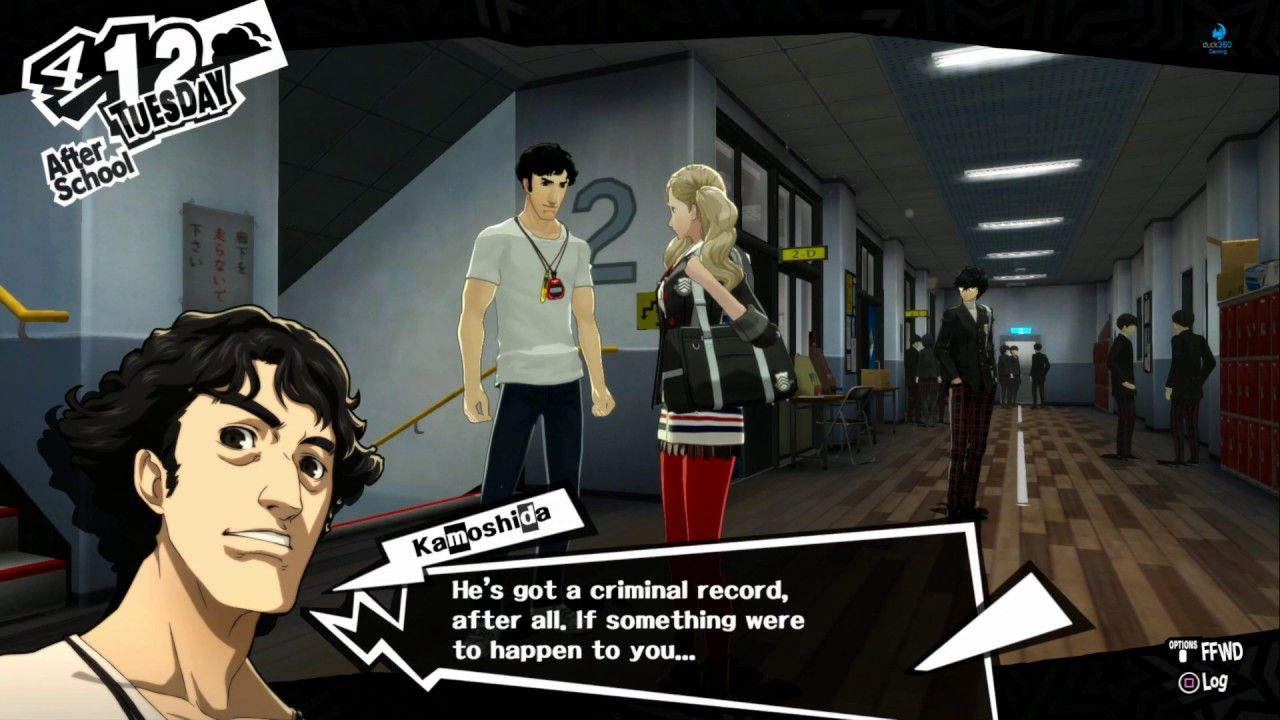 And it is! This opening makes you feel boxed in. You’re not allowed to do much. The school is big and confusing and there are not a lot of options. You can’t go out at night. No one likes you, and most people don’t want to talk with you. “Please go away, I’m busy.” The librarian says it’d probably be best if you didn’t use the library. It feels straining.

The game has many lines about “greedy adults” getting their will. The main cast are high school students who feel betrayed by society, by the “adults” who were supposed to protect them. Who instead, use them and abuse them.
There’s a scene after the first successful heist where the characters go to an uptown restaurant, and all the other customers look down on them for being there, or talk about how they can milk the news for profit. It’s not subtle, but the clarity helps its point: Many let those in power be because they benefit by not rebelling. So what if the occasional student gets shunned? He had a criminal record, serves him right, right? Now, if I can just get my next payrise by schmoozing a little, then we’re good. The media is a consistent presence, too, with a TV you can view every night, and it always tells the popular narrative, which is often against you. It is a game in where ones in power control the messaging and do not want you to exist.
Oh, and did I mention there’s also a strange disease in the country that’s slowly infecting more and more people?

But Persona 5 is also a game about rebellion and fighting back. Because that’s what the protagonists decide to do. They get a power that allows them to right a wrong, to subvert the system and change, literally, how people think about their actions. Not through the system itself, mind you.
See, the characters in Persona 5 cheat. They get access to a metaphysical ability to enter other people’s cognitions, and change how they think. Metaphorically and literally stealing their hearts.
In Persona 5, you cannot change the system from inside but have to break it from the outside. You must play by another set of rules than what the system gives you. By day, you live in the structure, and act as the honest student the world wants of you, but when they aren’t looking, you enter their minds and fight their shadows.

Oh, this game is still stylish as all hell. Look up gifs of its menus if you haven't.

But let me just say that living within that structure, right now, feels… incredible. This is April 2020. Have been at home for a month now. Persona’s structure is sooo soothing in these times. You progress through the game day by day, doing activities and following schedules. You go to school Monday-Saturday (yes, Japan does school Saturday). The school cafeteria sells Yakisoba Pan on Friday. The juice kiosk in the subway mall is open Sunday. The vending machines restock Mondays. You can hang out with your friends when they're available. When it rains, you get more points for studying. In a time when real-life days blend together like smush, this is very pleasant. The sense that there is a structure to the days. That there is progress and a way forward, one day at a time. That there are holidays and school trips to look forward to.

When the player gets the ability to fight back, gets the freedom to explore the town and DO something, it feels incredible. Even if that something is “living an honest student life”. It’s meant to be freeing when you’re allowed to do more, but right now, it already feels incredible to just live in a city where you can move around and attend school.

This game has got a strange double position right now where it both feels more relevant in its themes and ridiculously comfortable in a time where schedules don’t exist. I didn’t realize until I started playing it just how nice this game feels right now. I kinda can’t stop playing it. 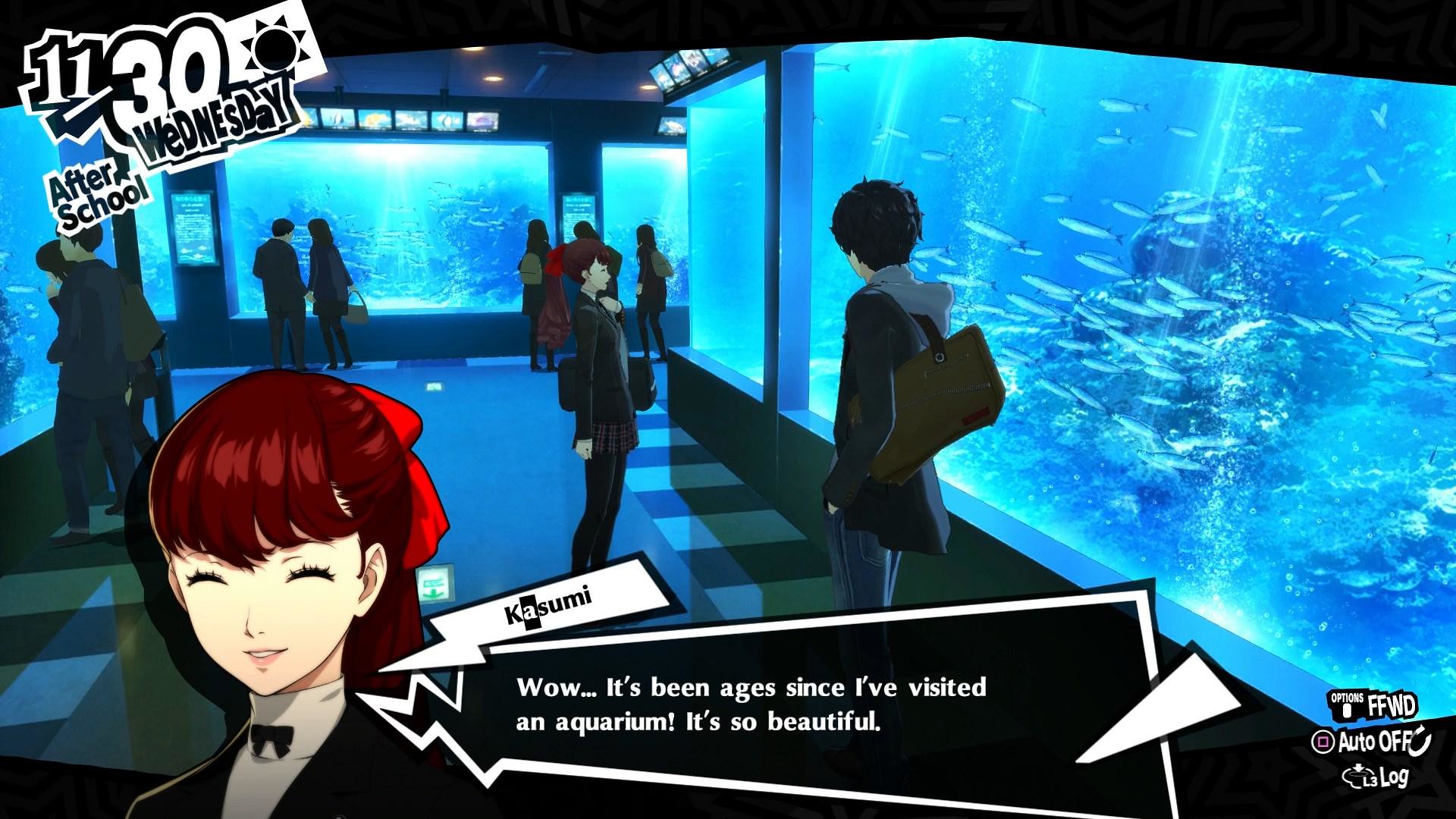 Look at me! I'm in the aquarium! There's other people!

And it’s not a perfect game! It deals with some heavy topics and doesn’t do it all well (supposedly, some of the grim queer stereotyping has been fixed in Royal, but I haven’t gotten that far yet, so can’t comment). And sometimes you have to live with the idiosyncrasies of the writing and pacing, more than enjoy them.

But it is exactly the type of game I want to play right now, and I am enjoying all the additions in Royal so far. They’ve tweaked and smoothed a lot of the unevenness, so it feels overall more coherent and cleaner than the vanilla experience, and all the new characters are so far fantastic.

I think a lot of people were disappointed this game wasn’t as grounded or as subtle as they had maybe hoped from the advertising and all the prison symbolism or the opening. That the game was better at handling its serious themes with gravitas. That the writing was more successful.
And this game is not subtle! It hits you with a sledgehammer with its themes, and is proud of doing so! But honestly, right now, I don’t mind a game that unabashedly wants greedy people in power to be knocked down a few pegs by some cheating thieves who act on their own accord. And it feels fucking great to go to school 6 days a week. Sometimes, you need a few feel-good narratives in your life. This is one of those times.