Last time, we began our delve into the recesses of a giant whisk, to learn of its chef's great demise, as we usurp his cooking abilities with our own mastery of ice and fire.

This time, it's time to put those skills to the test with the greatest cooking challenge yet: Turning water into ice. 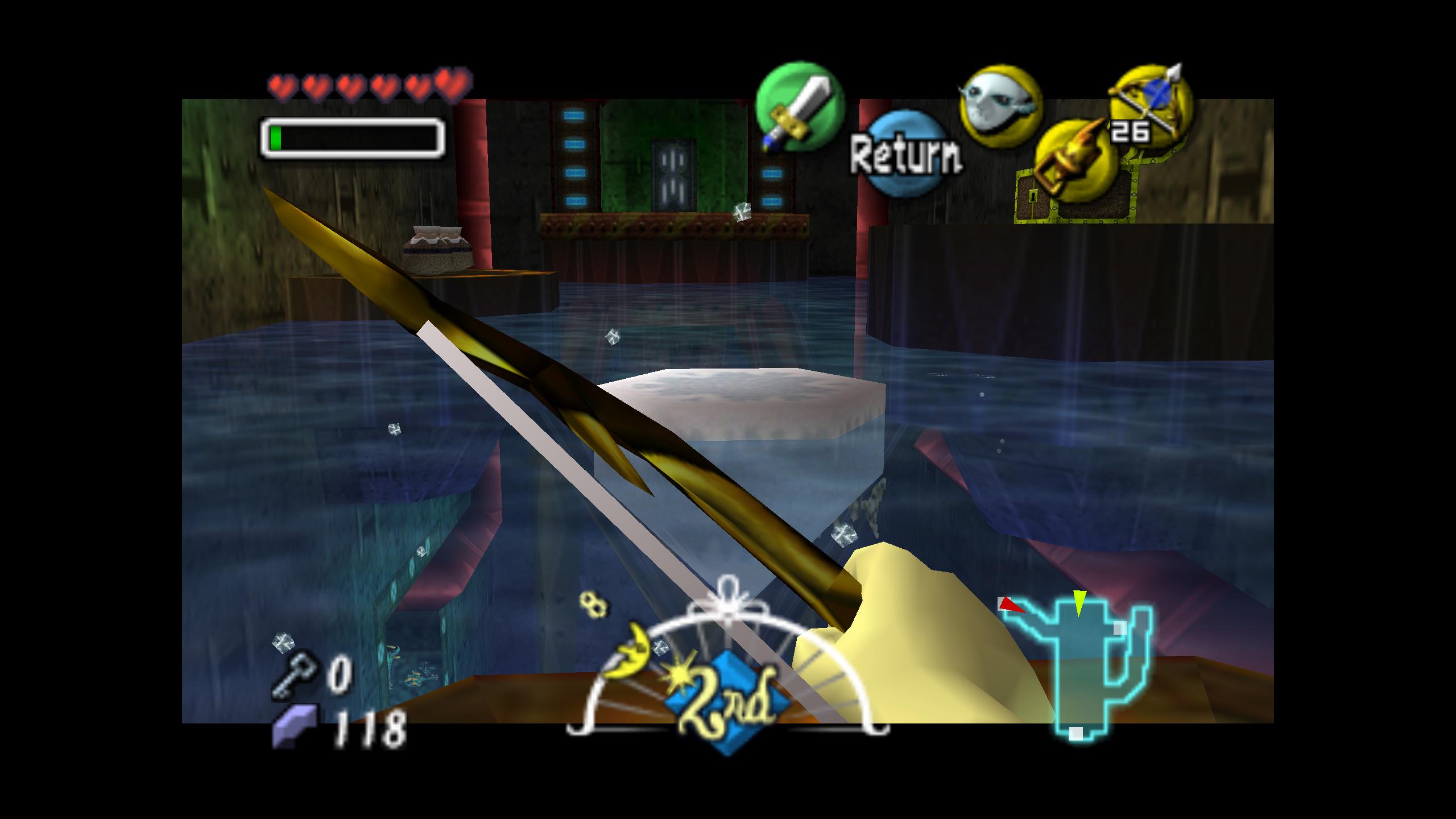 It's actually not that hard, but the problem is to hit the right places and utilizing the wonky animations in this game to make sure you actually land on them. 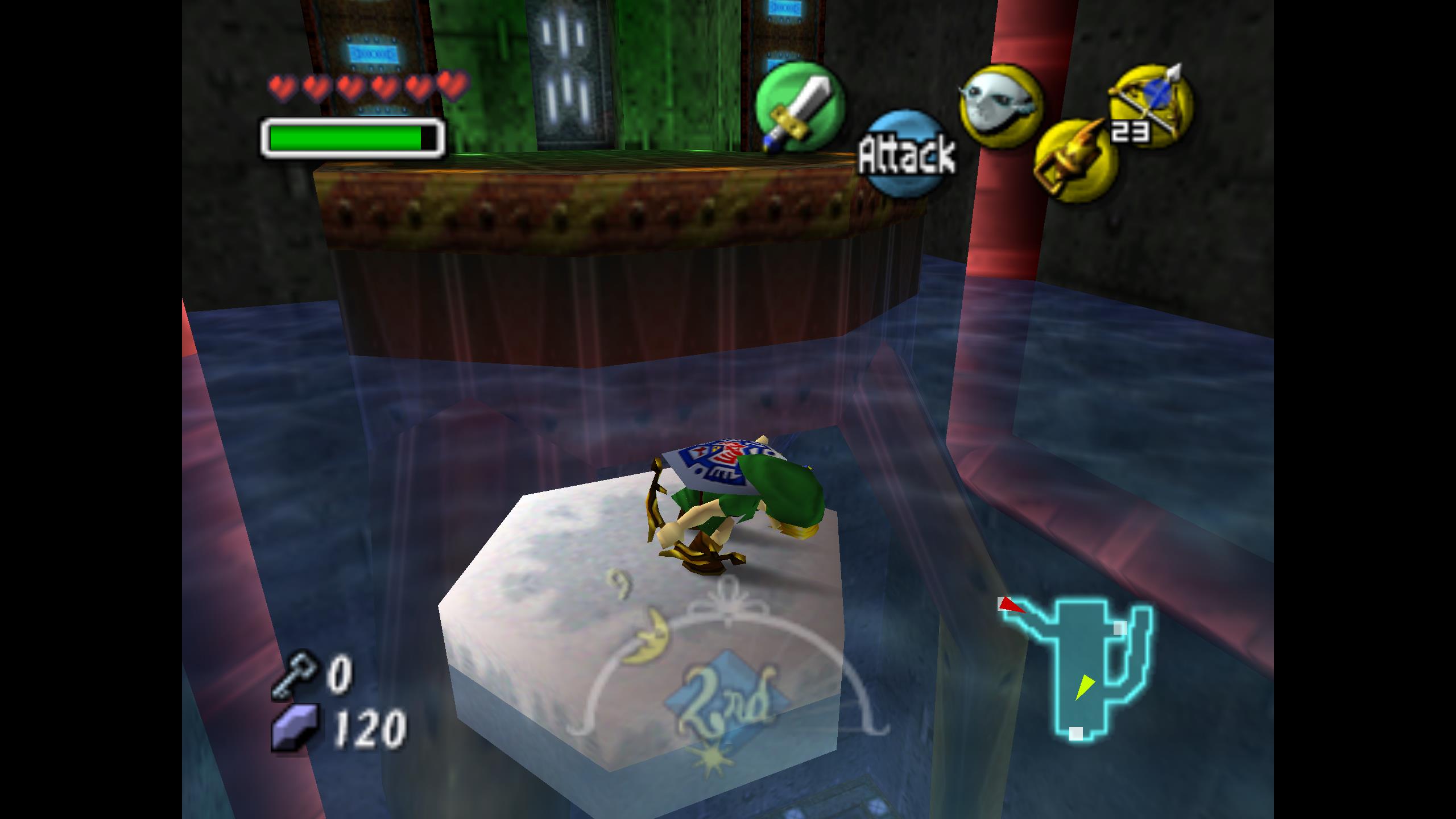 In the next room is this big platform with red pipes flowing through, expect it's not actually flowing through until I go and turn the switch around. 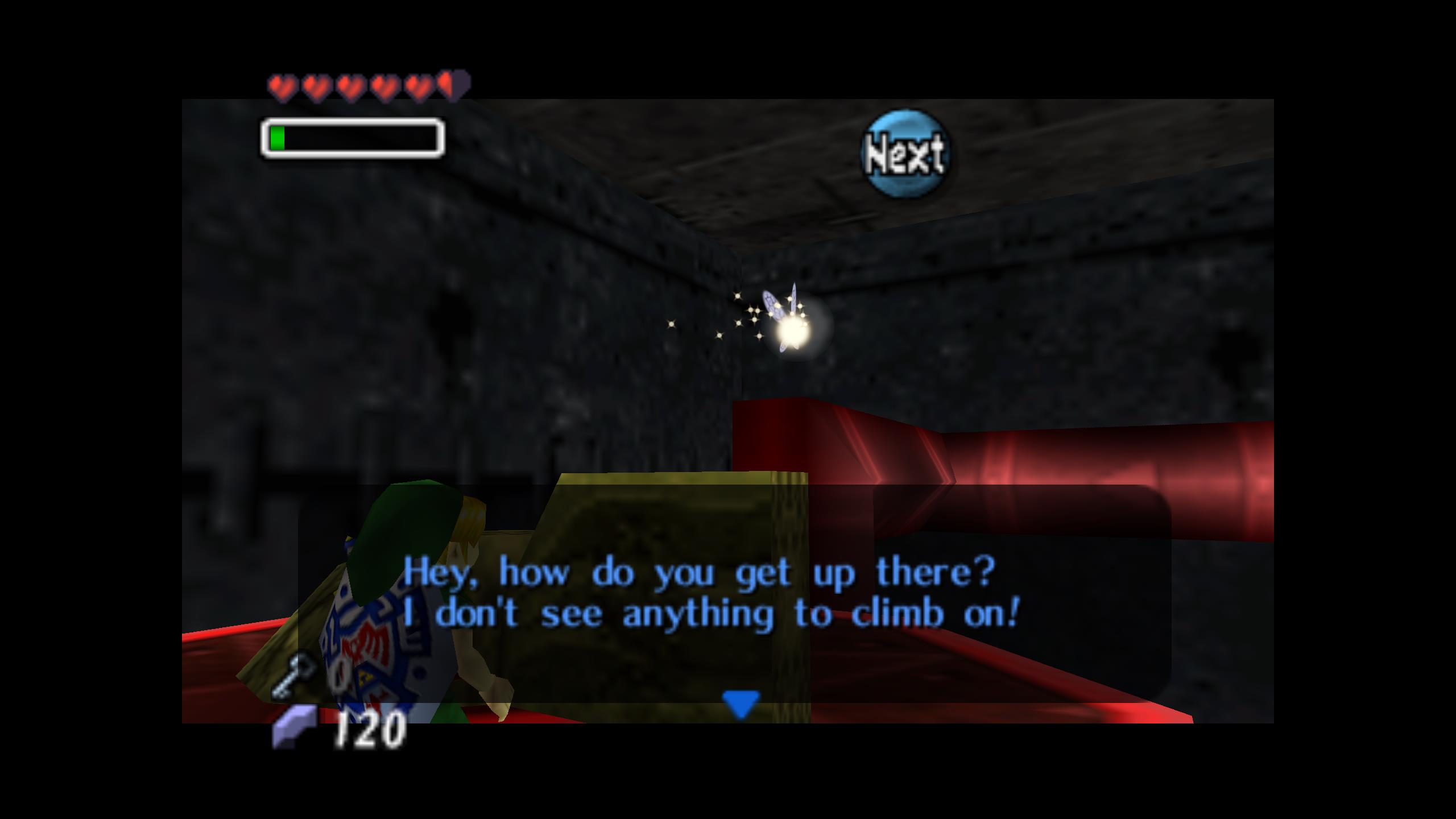 How indeed, Tatl. I'm a bit of a magician in the kitchen. I know.

Now with the red pipe also flowing, we proceed out of the room again. I realize I don't know what's flowing in the pipes. The natural assumption is water, but that's also the boring assumption.

It's definitely not water. 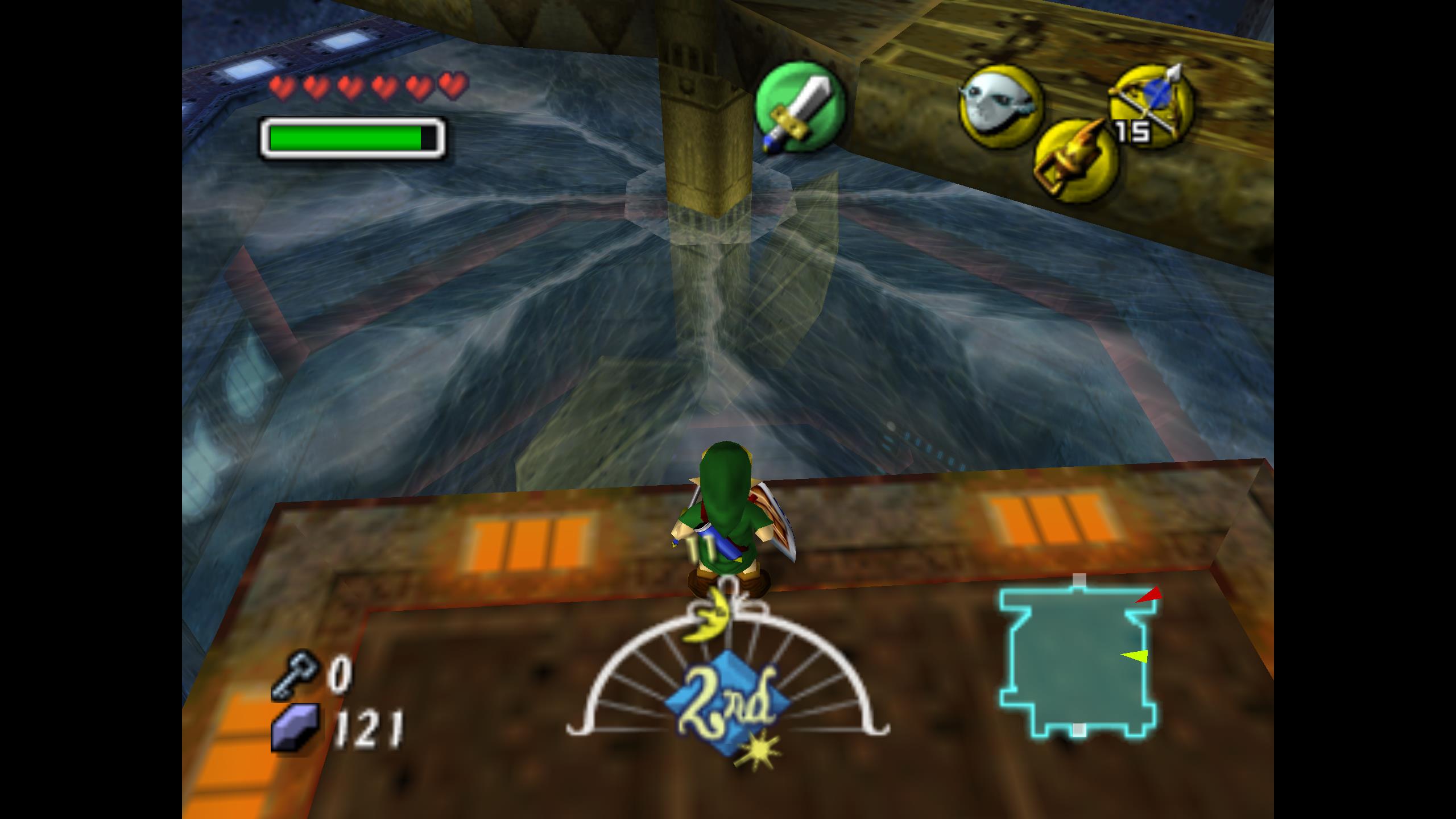 Didn't get a good image of the giant whisk in the last episode, here it is.

After some fumbling to figure out the right way now, (ahem, you know what I mean), I find this hallway encased in ice.
And the only good ice is the ones I place, so I melt it away with my fire. 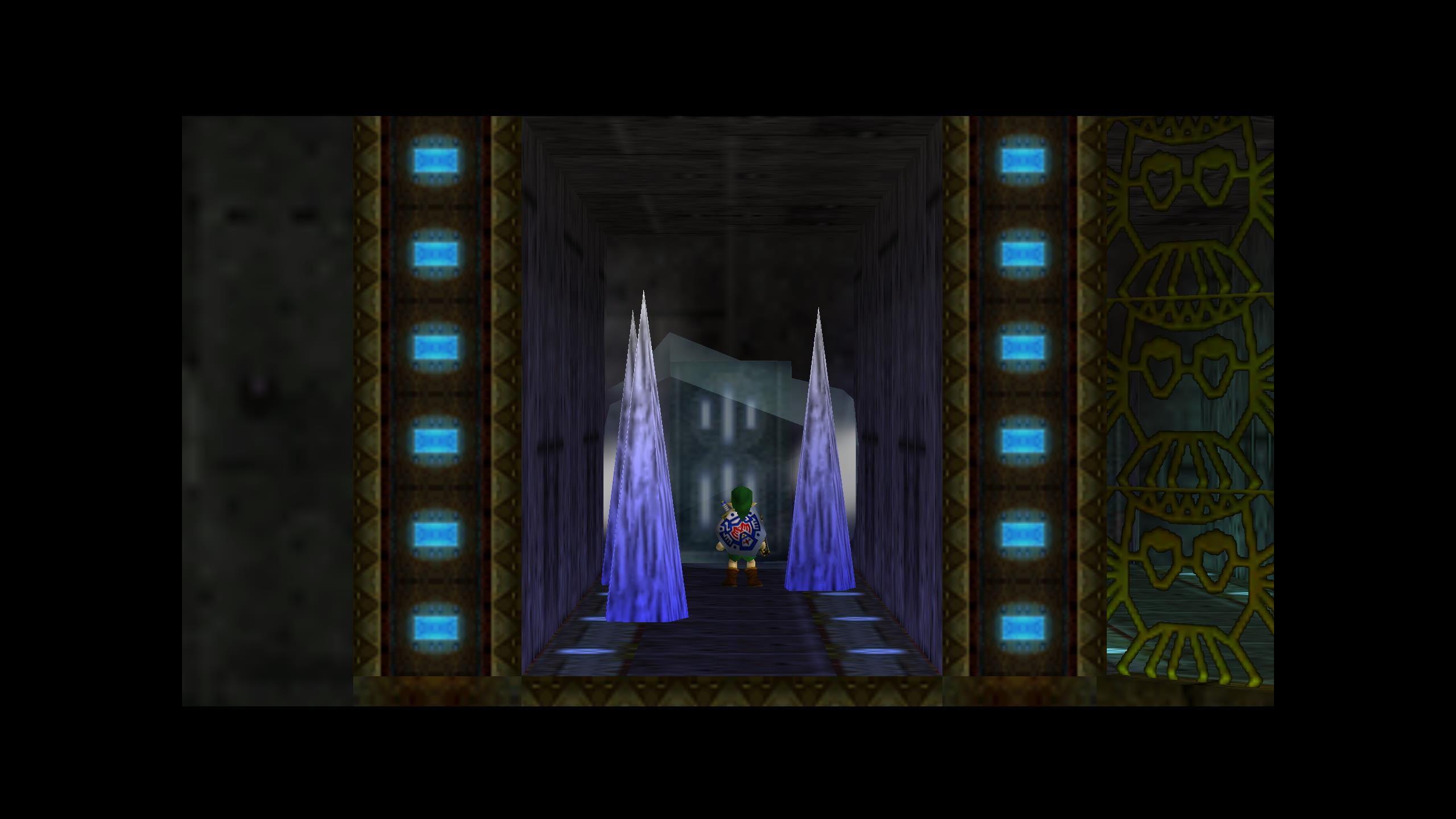 Let's see who the culprit is: 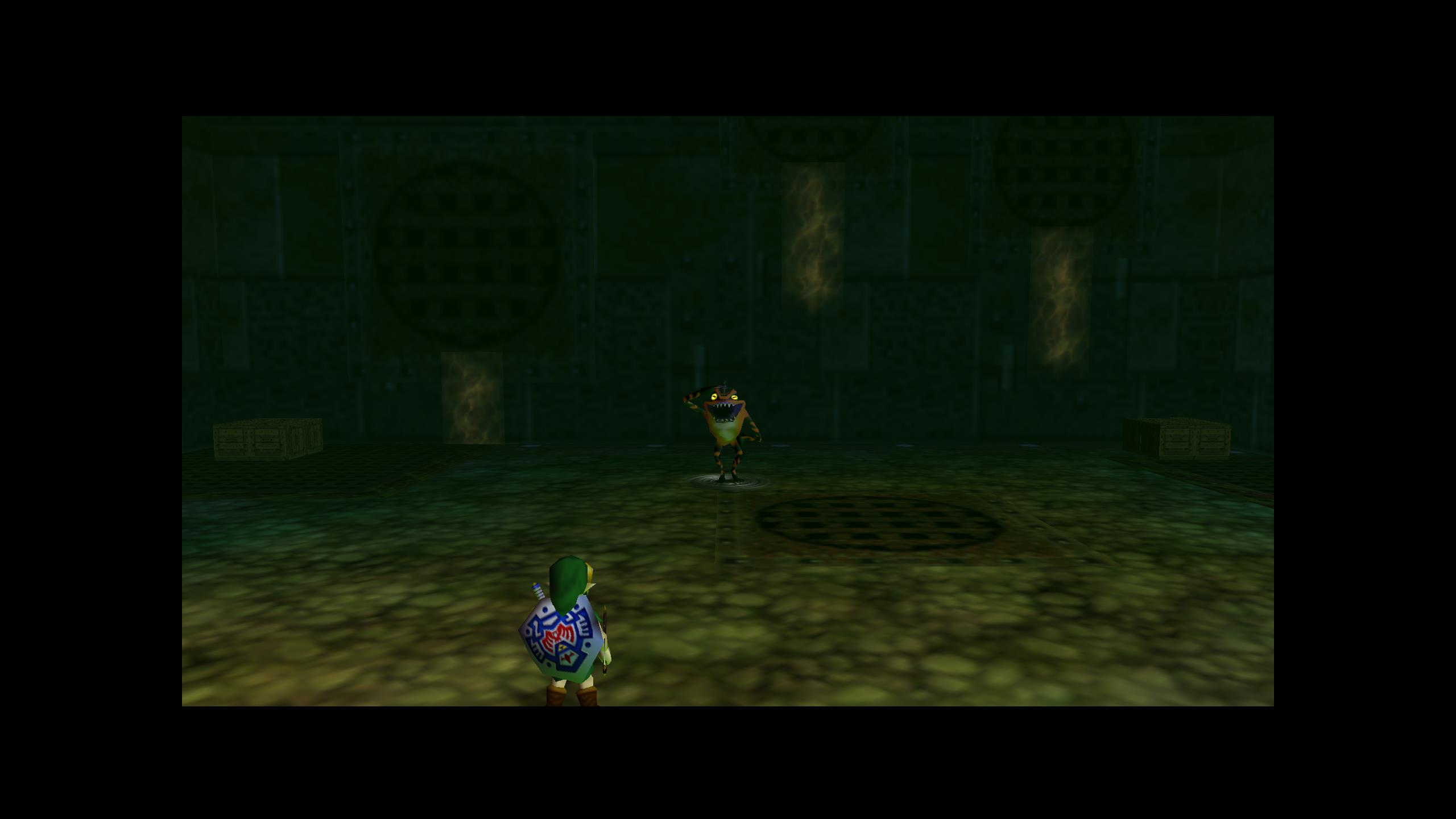 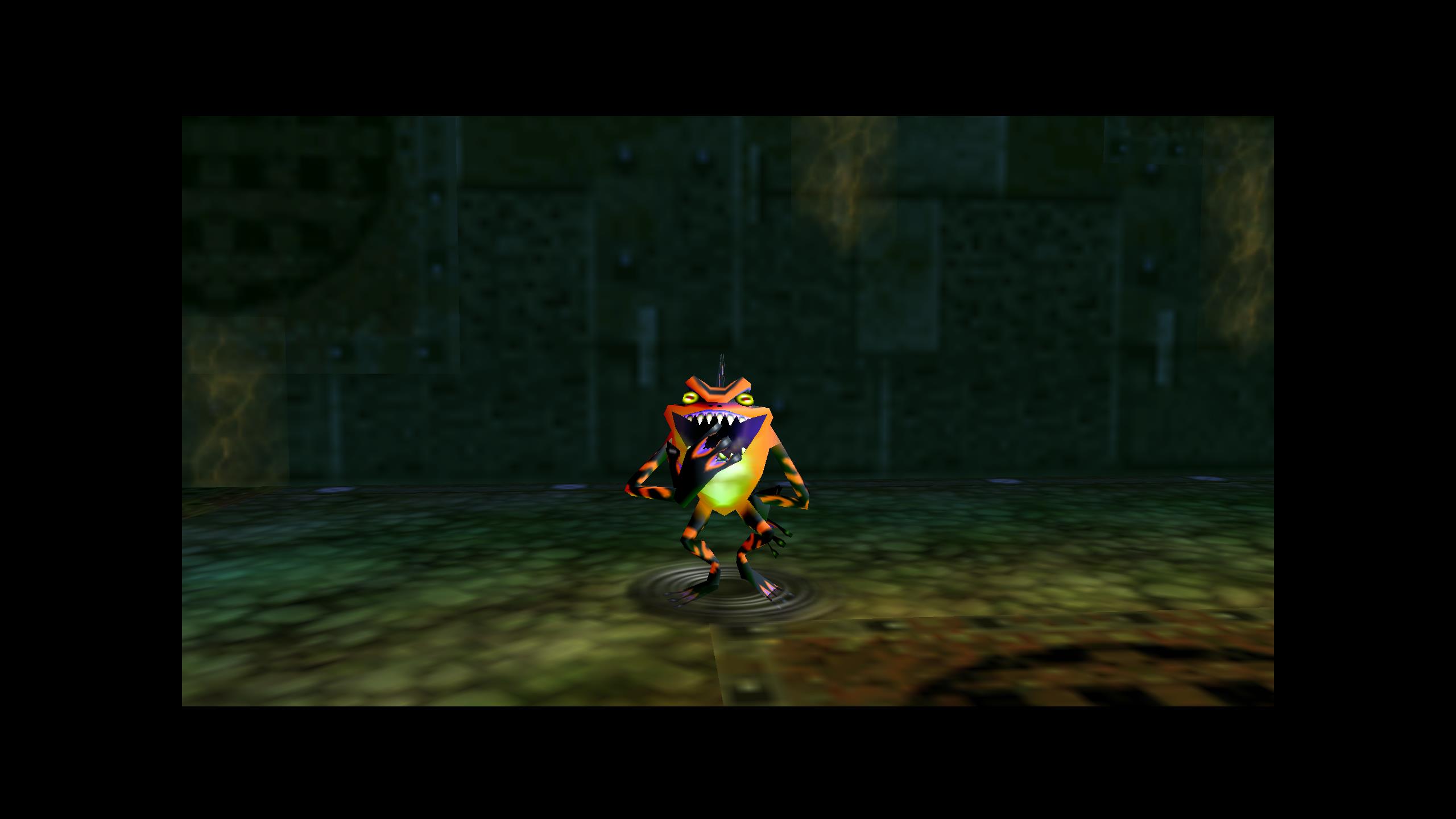 *hihihi* "I have a surprise for you Link." 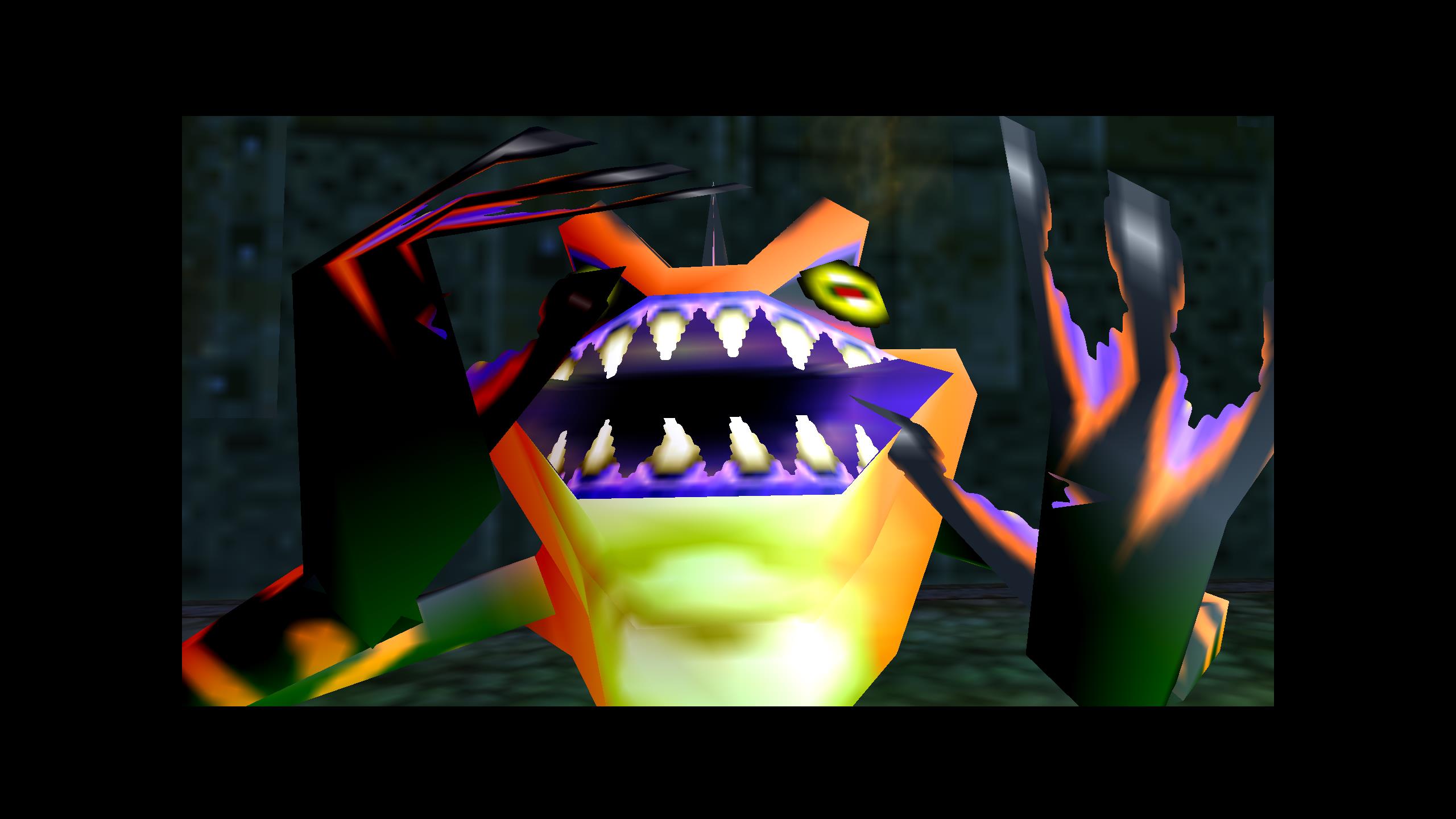 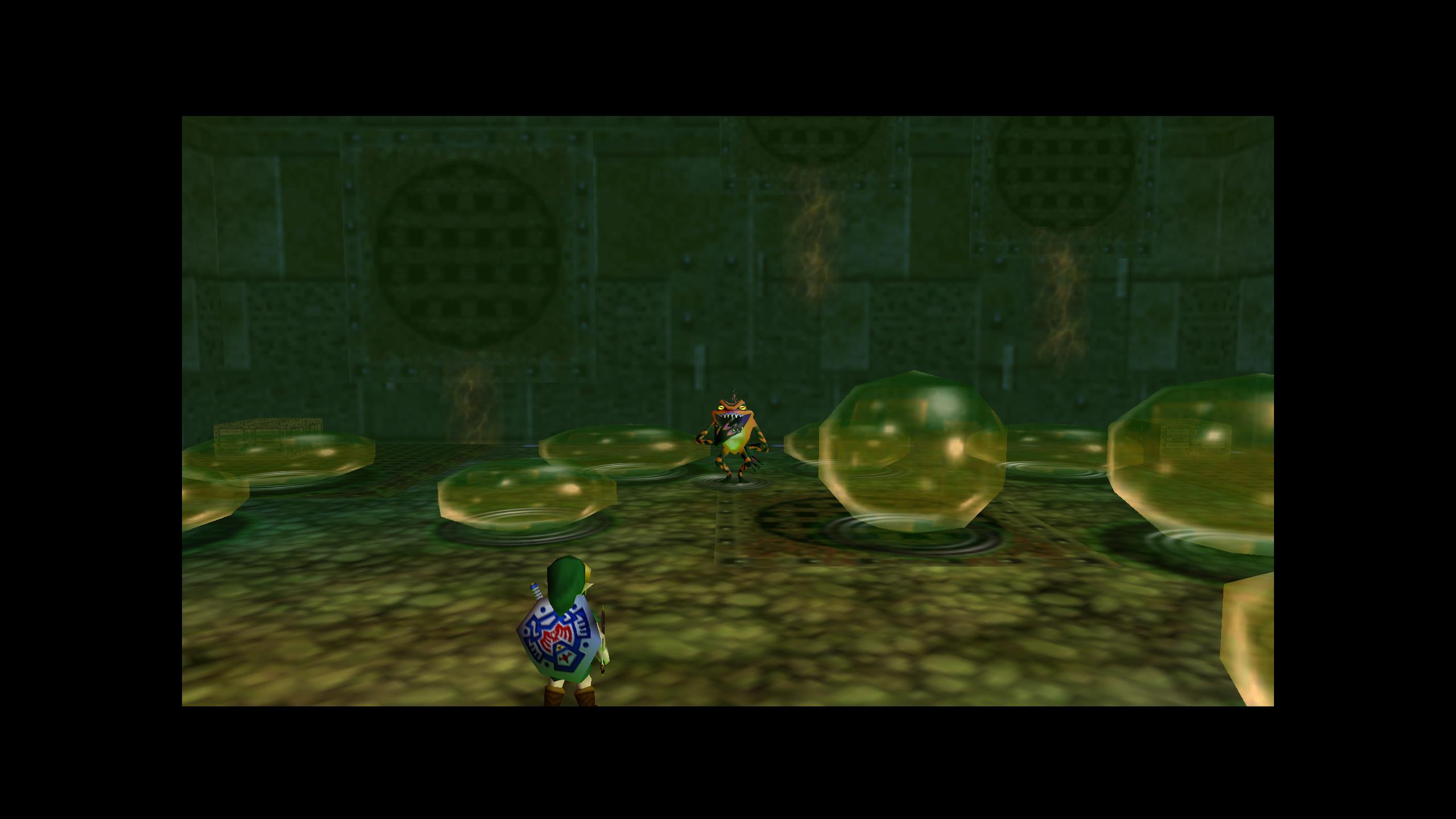 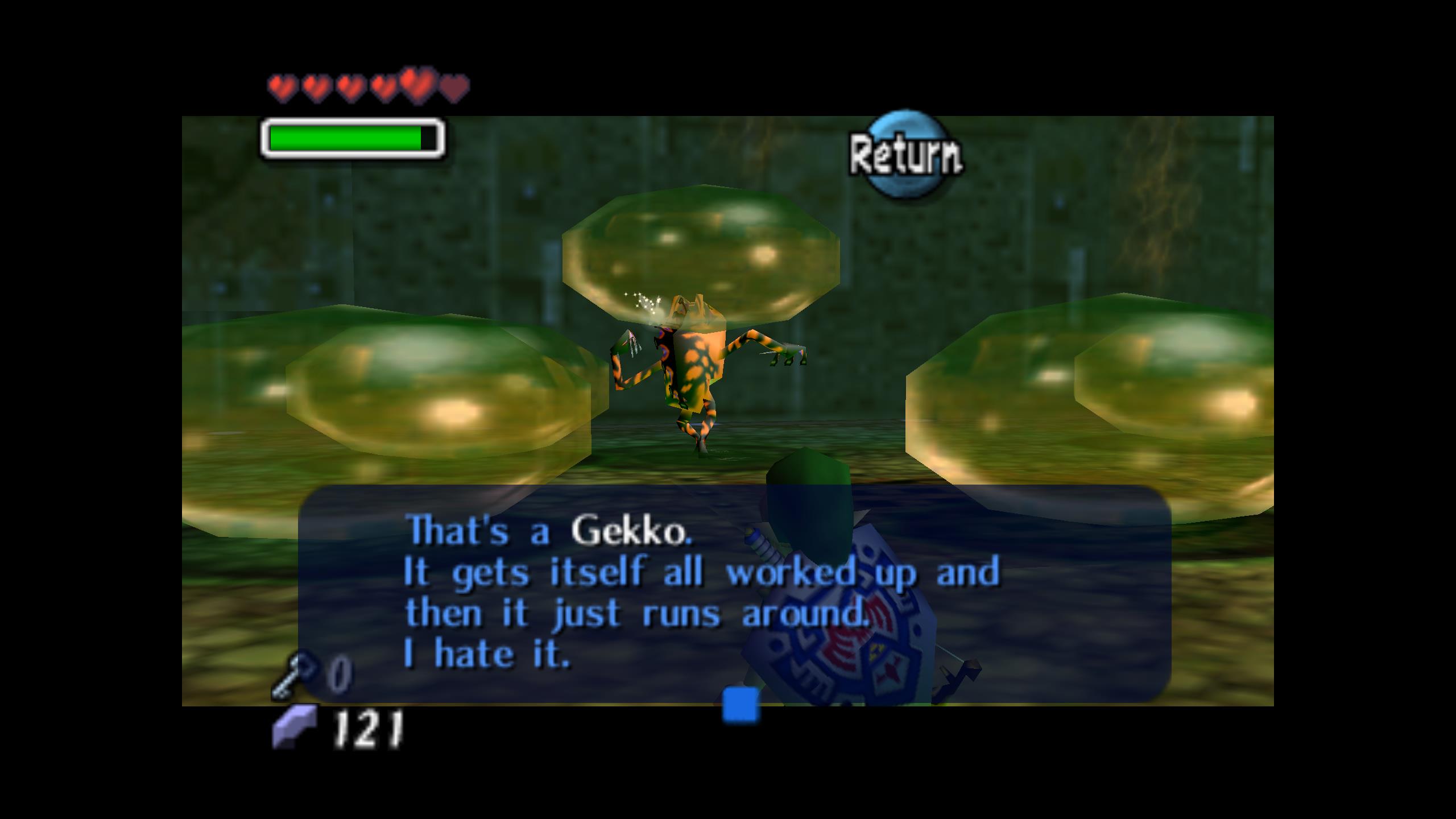 This frog has friends, and they're more just blobs than anything else. They hurt to walk into but that's about it. No, he's the real threat, expect he's not a threat, because he just runs away and is scared every time he sees Link.

No, the real threat is this: 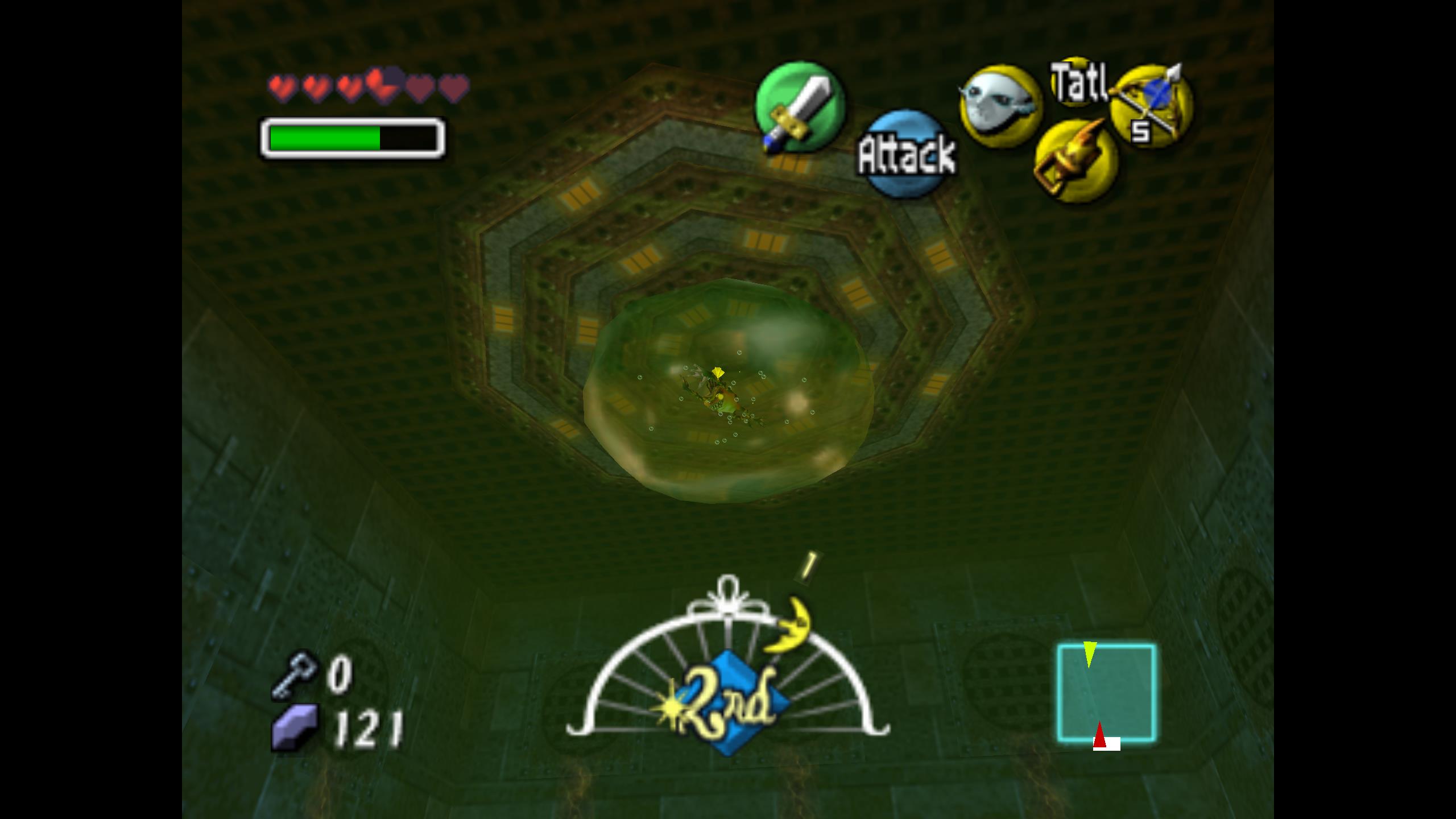 He summons all his friends into a blob and jumps into the ceiling, and then tries to hug me. 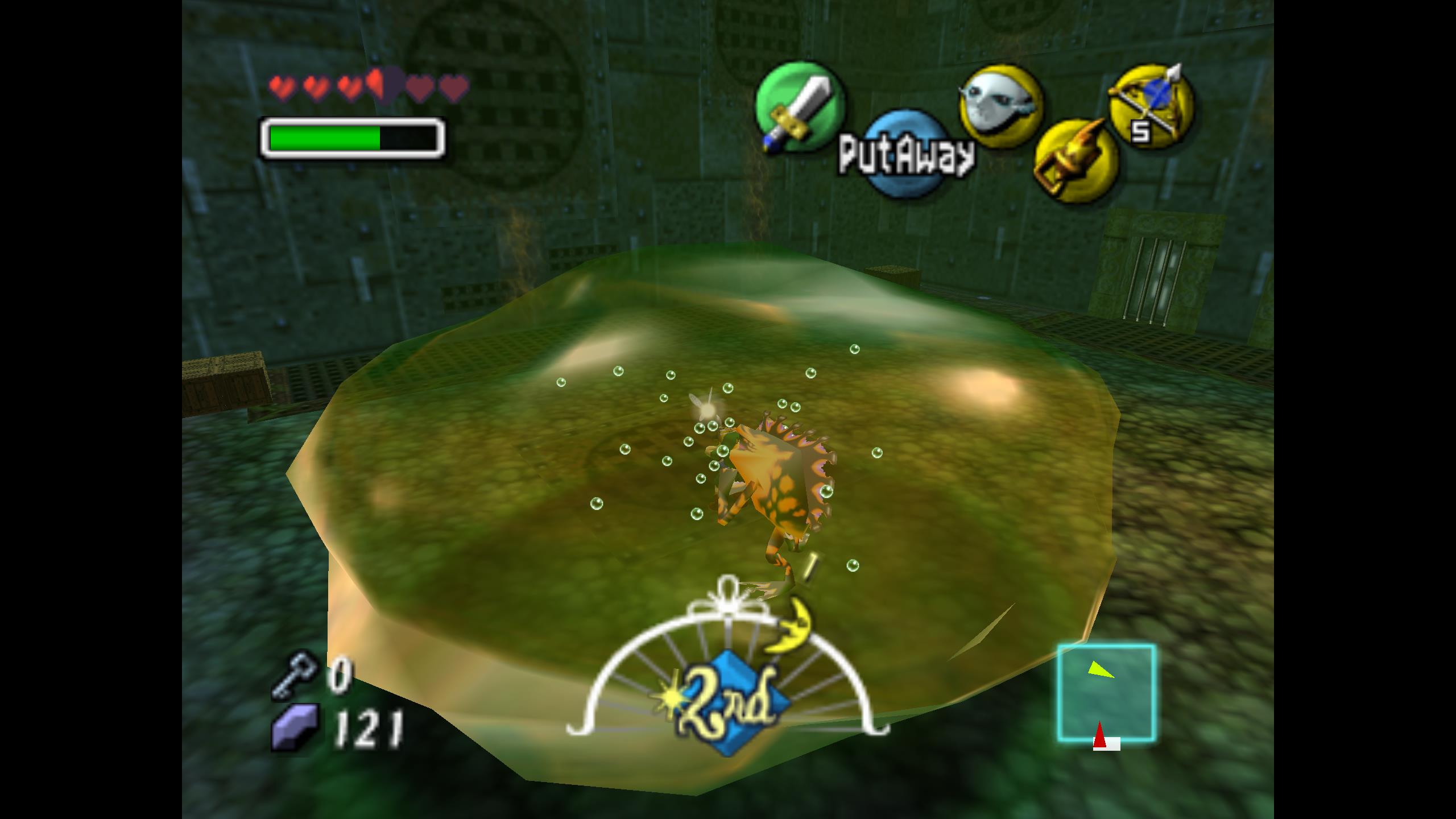 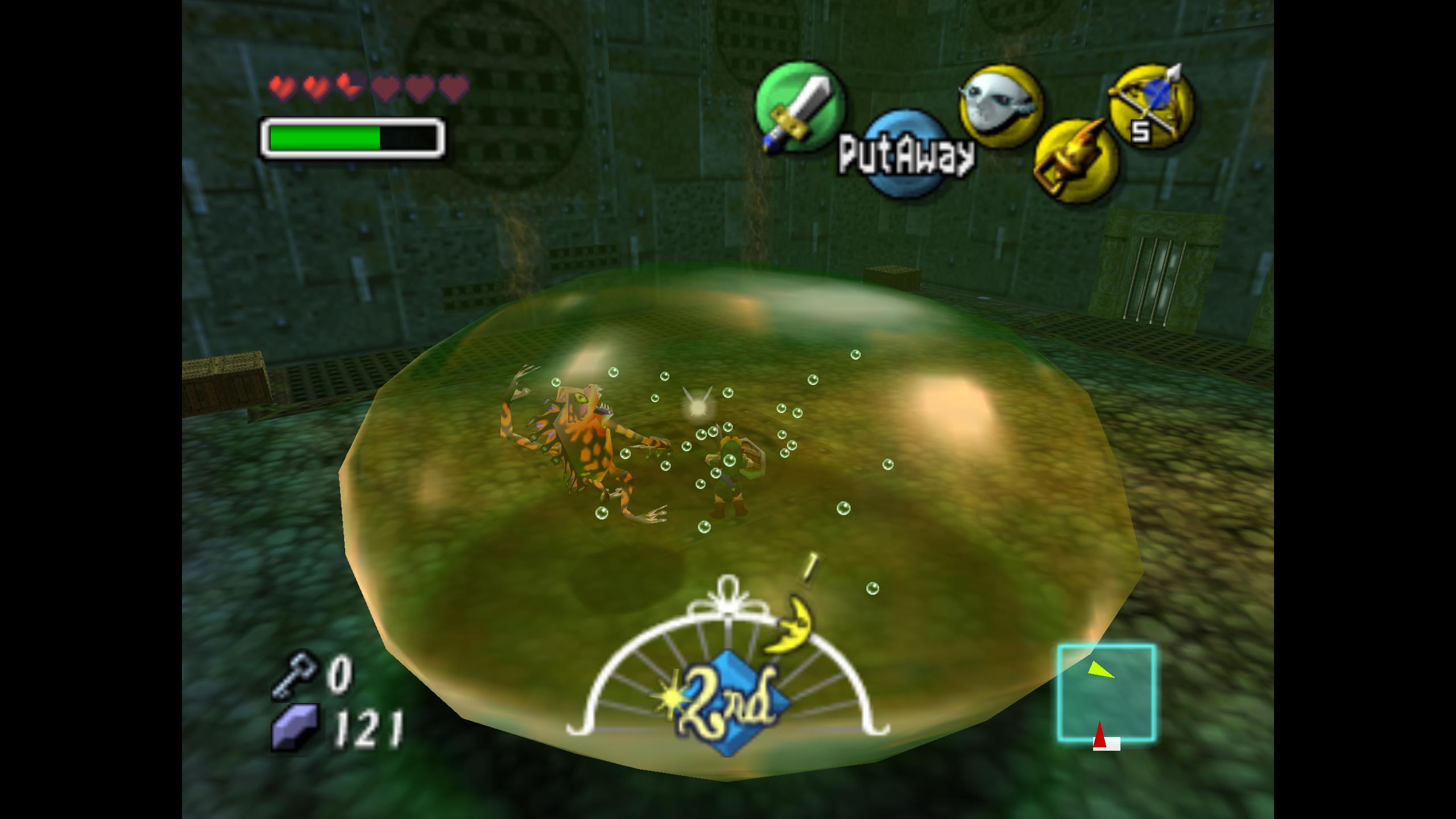 And then punches me out again because I'm not a very good hugger.

Which isn't wrong. But he doesn't have to be so mean about it.

The solution, fortunately, is simple enough: 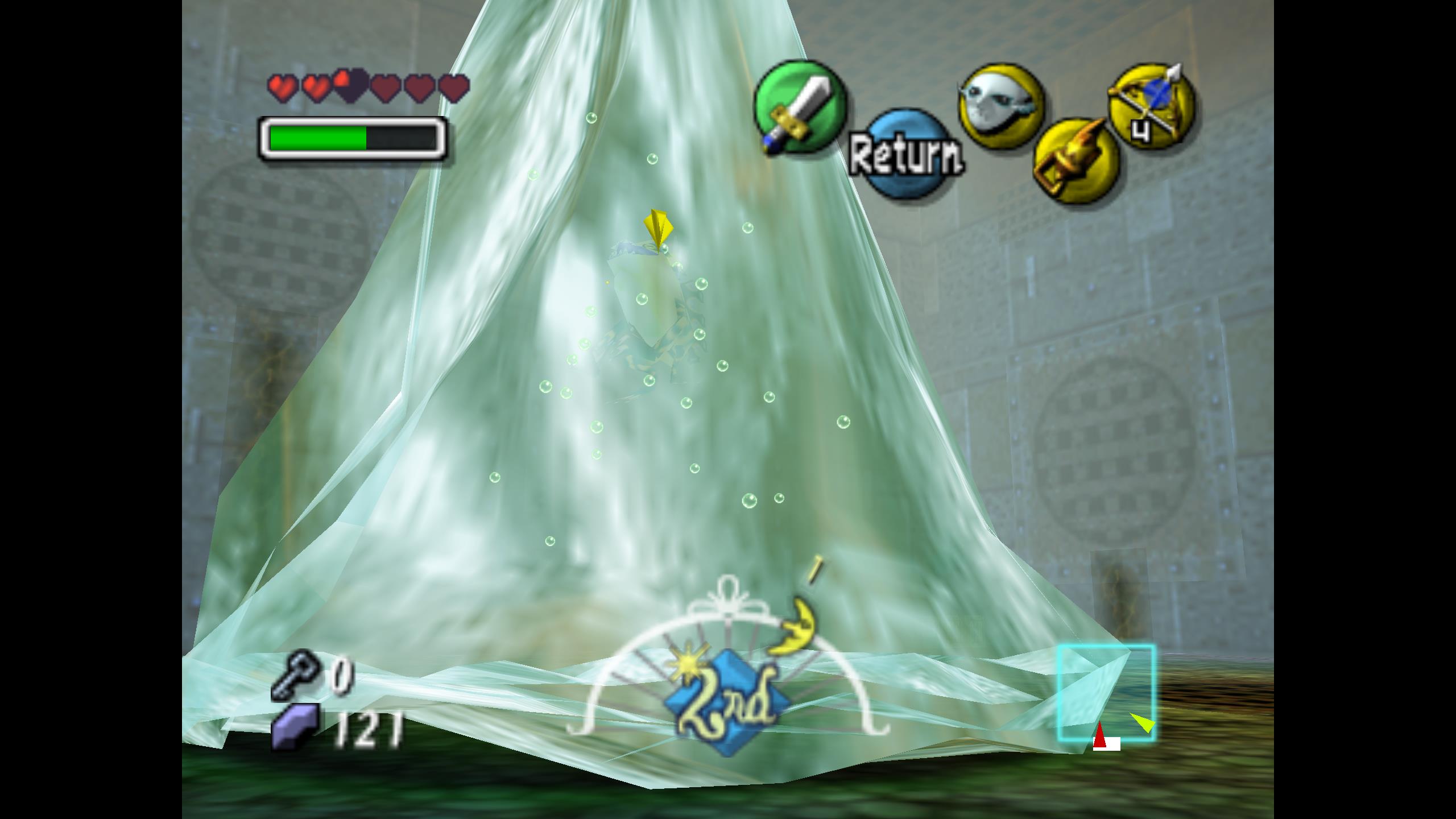 However, just pretty does nothing. We have to make icecream in the air. You know. To aerate it. Like any good wine. Or pizza dough. Aerated frog is a true delicacy. 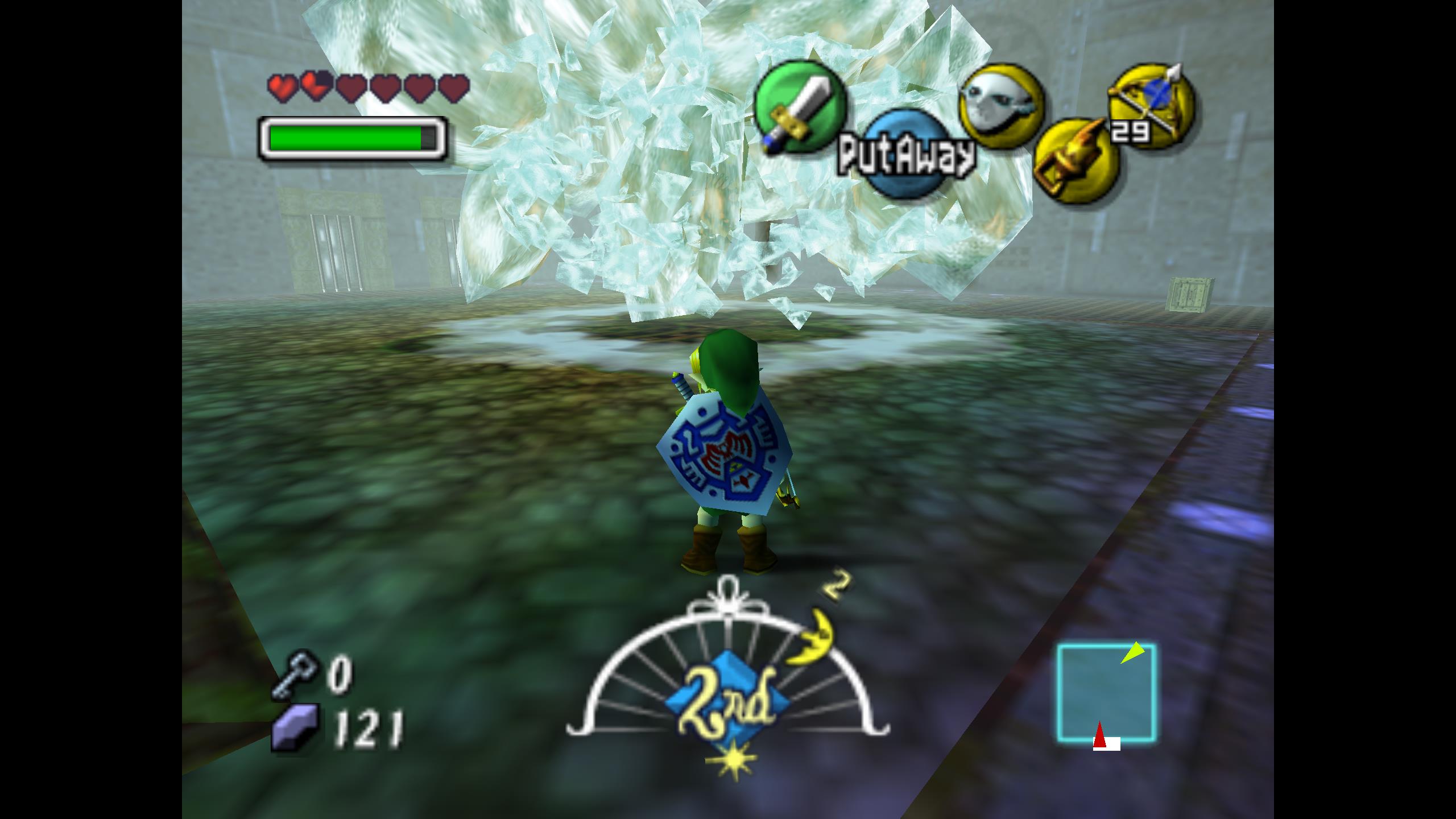 He then smashes into the ground and breaks the ice cream into pieces (rude), and then I can go smack him again as sign of my unsatisfaction of him as a customer.

We have to do this 9 times.

I don't know who decided that multiplying Miyamoto's rule of 3 WITH 3 was a good idea.

I died twice doing this.

But it's all right, we got to see this little frog friend again: 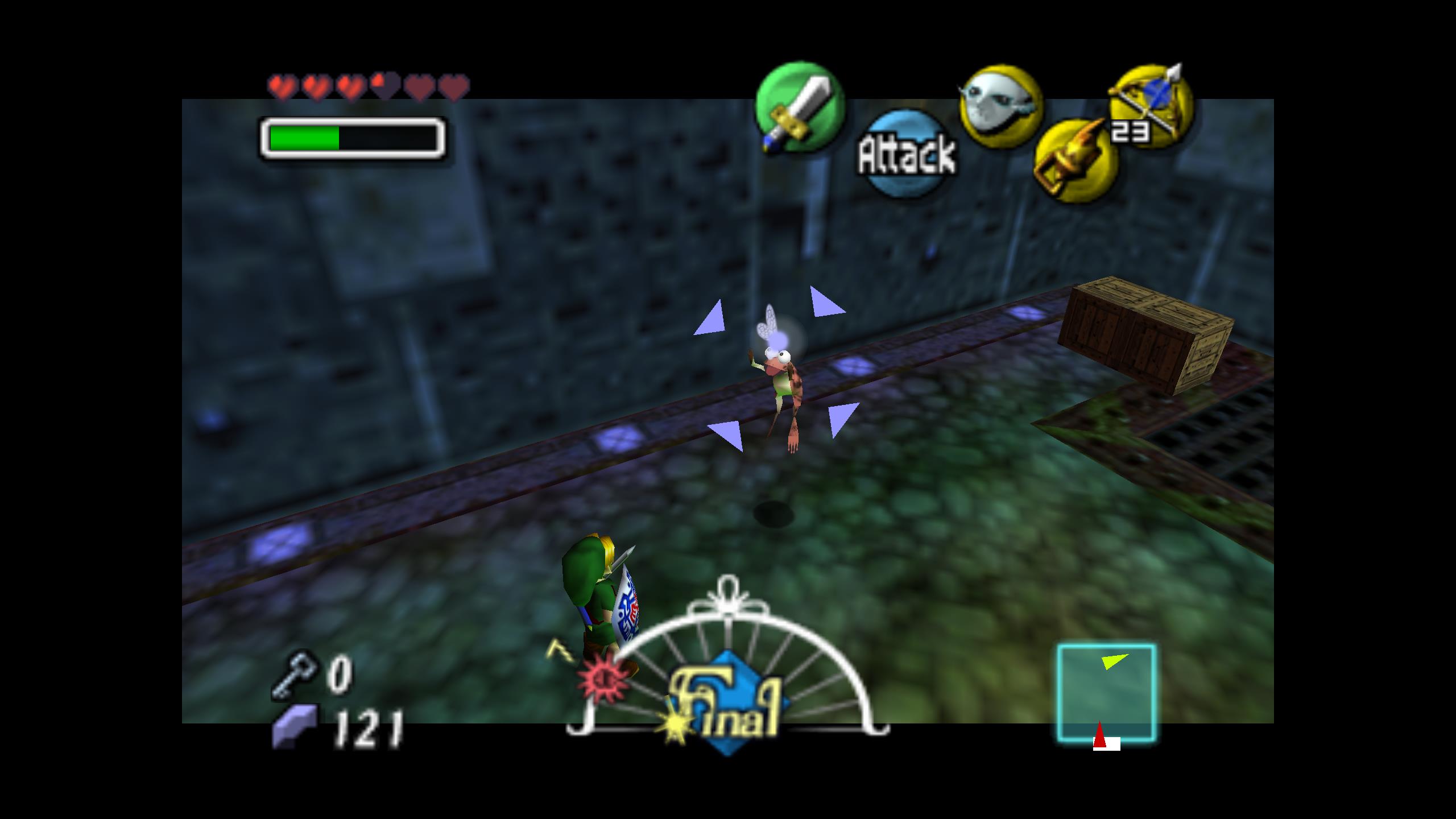 Because apparently Gekko's turn into these little frogs. I still don't know why.
I had Gekko on my Party List since the Swamp Temple, but... he's not making a good case for himself, gotta say. Trying a little too hard, he is.

Anyways, that gets us the boss key, which is usually enough but the guide says it's not enough. So, time to go and do some... plumbing?

I have to fix some pipeflows.

Remember that big waterwheel in the beginning? It flowed one way.

Now that there's goo in the red pipes, we can make it flow the other way! 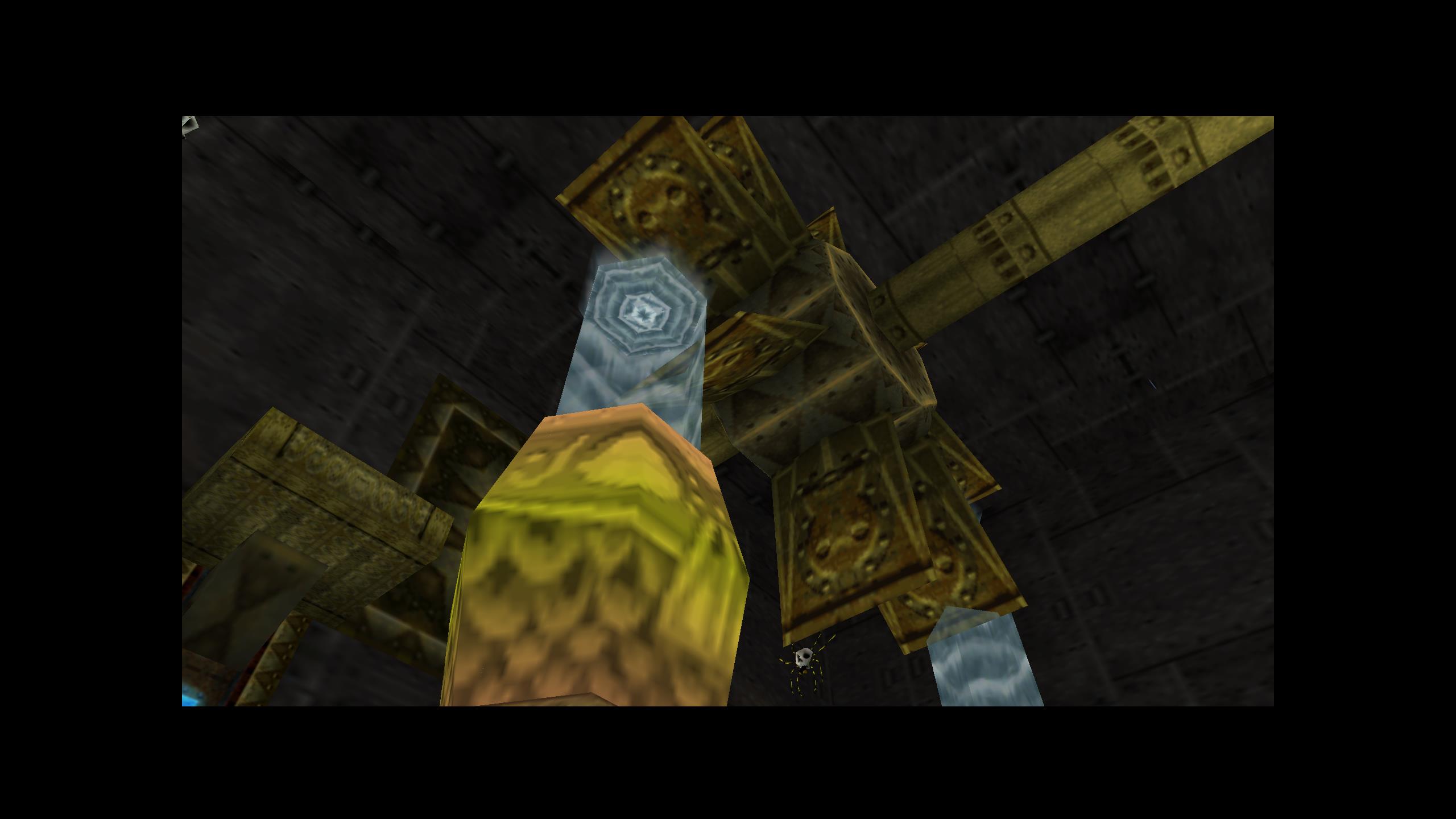 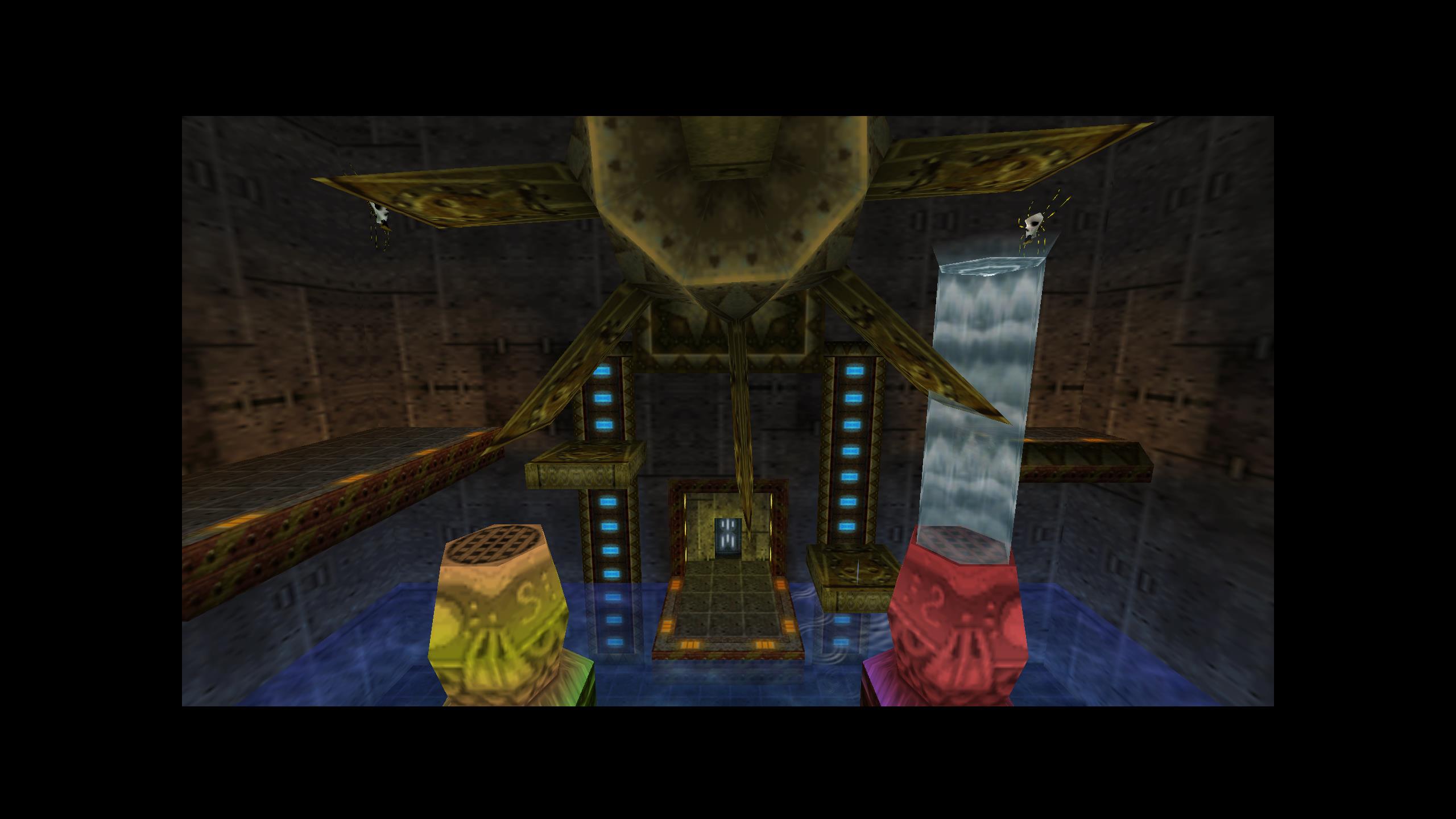 See! No more yellow, just red. Counterclockwise is superior to clockwise. Naturally. Because it is the opposite state of how it was when we got in, and we need to change every binary value to its opposite, if possible.

Switch not flicked -> flick that baby.

Also, you might think that this being water makes a good case that there's water in the pipes... But I'm not convinced. Because there's all this water outside the pipes, you know? Why encase more water in pipes? No, it's goo. 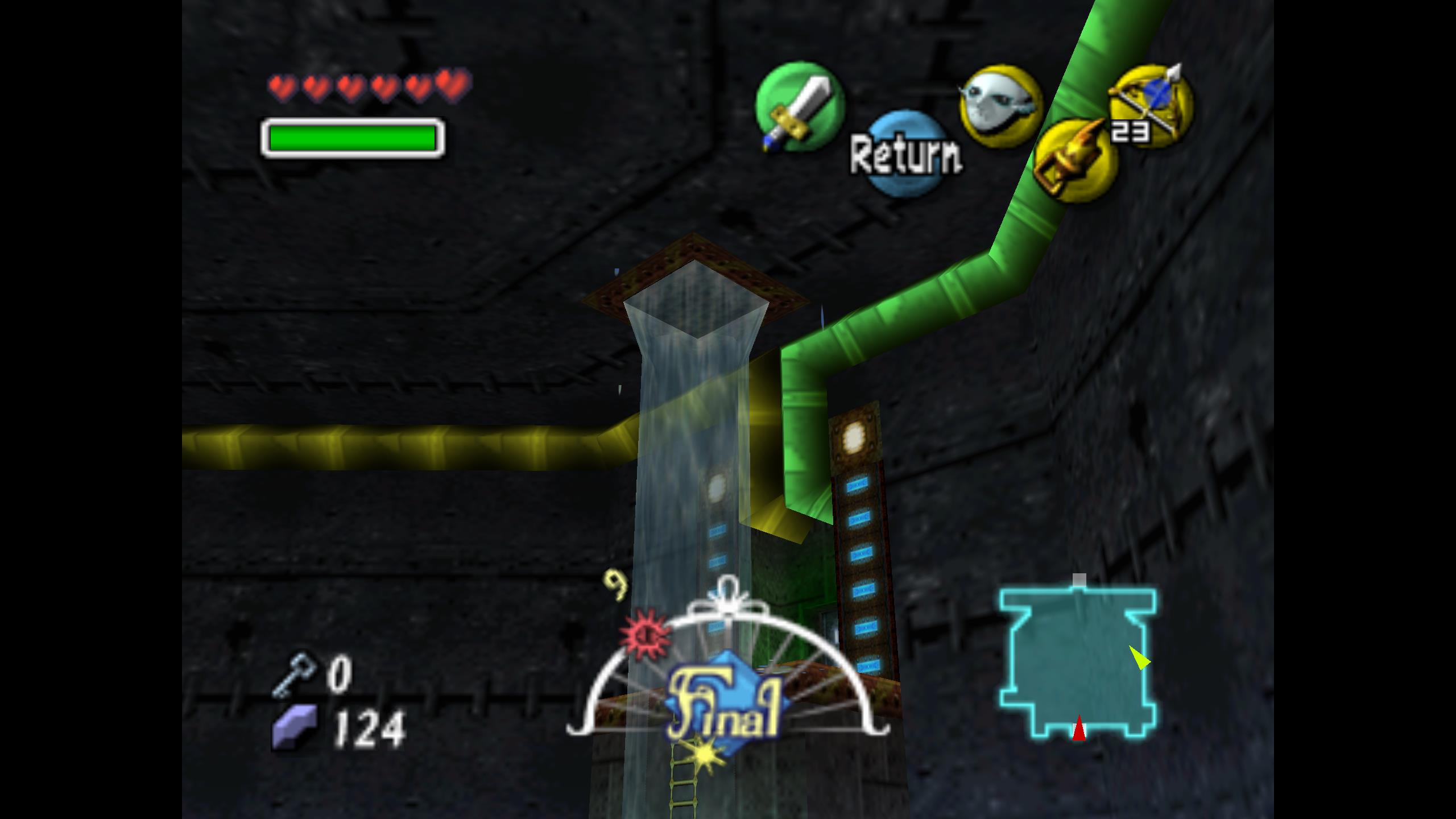 We got one left. The green one. It's green, so you know it's mean.

This whole place has got a plumbing problem. Maybe that's why the cooking went so bad. We need to unclog some dirt from these pipes first.

And now that the water in the giant whisk whisks the OTHER way, it's a whole different game.

Look what we can do! 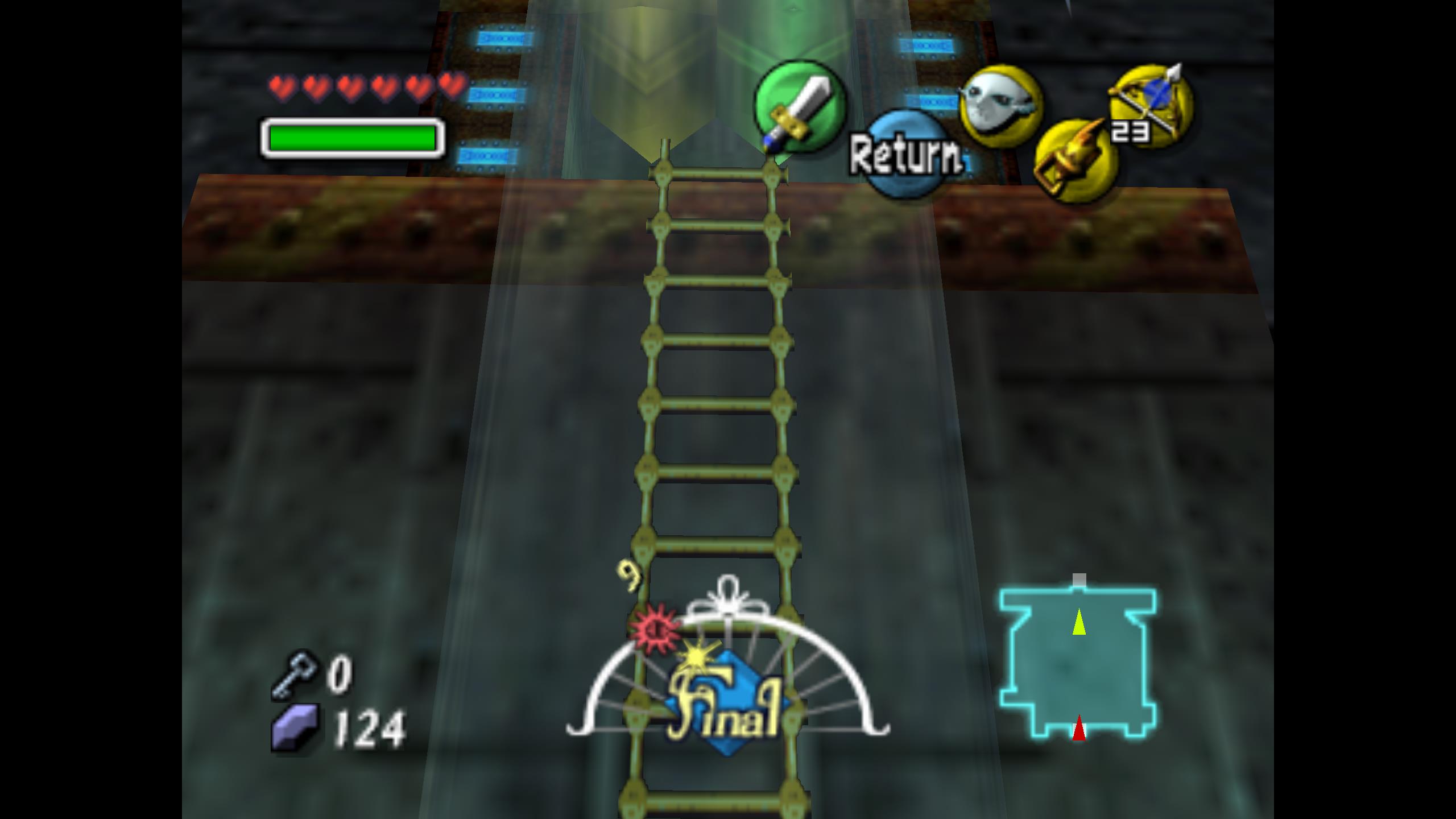 The water on this ladder? 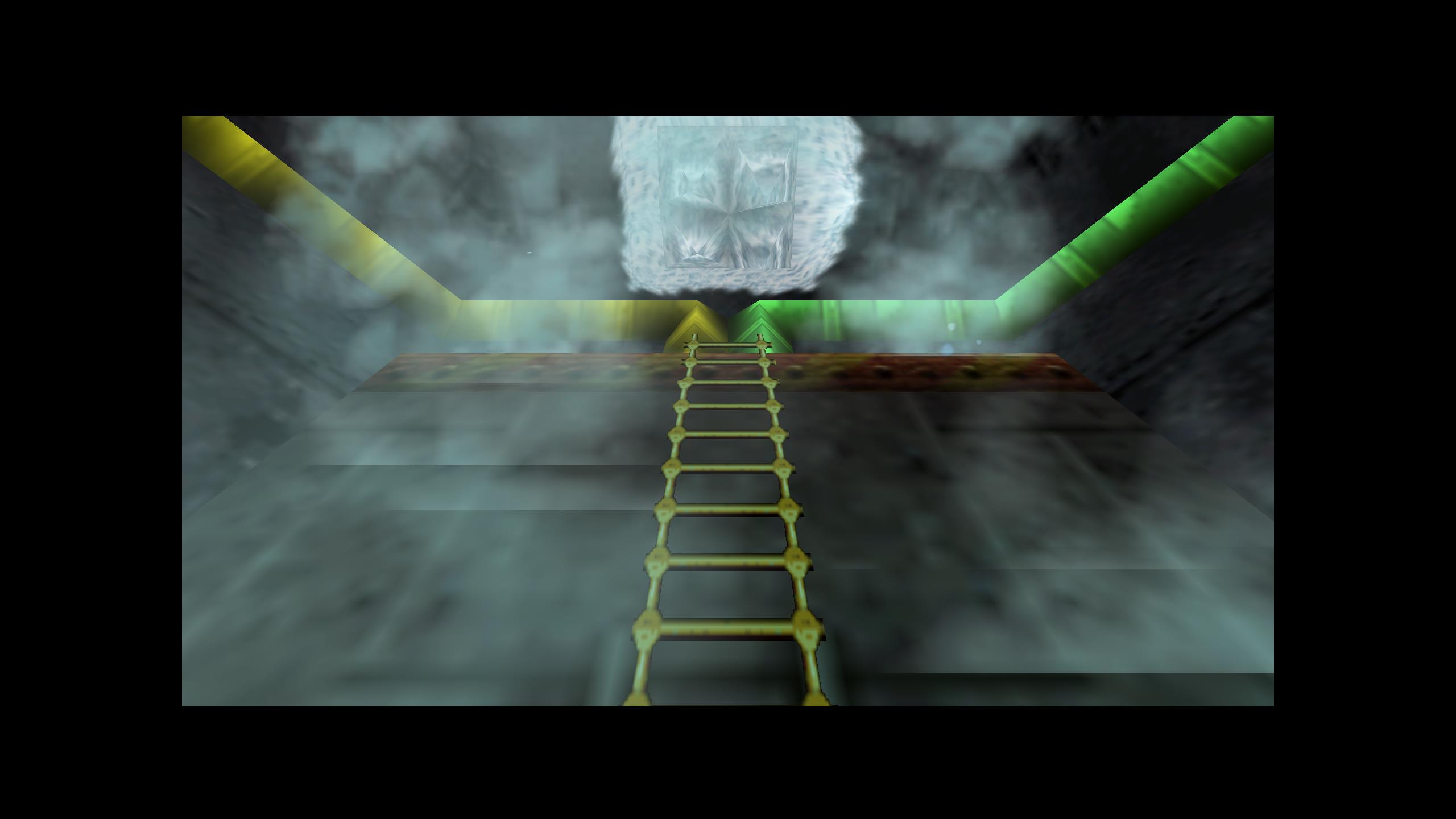 This has... nothing to do with the flow of the goo pipes. But it's a thing you can do. And I did it after the goo flow change. So. Yeah. Nailed it.

Now we can crawl up this ladder and get to the first green switch!

Look at this room? 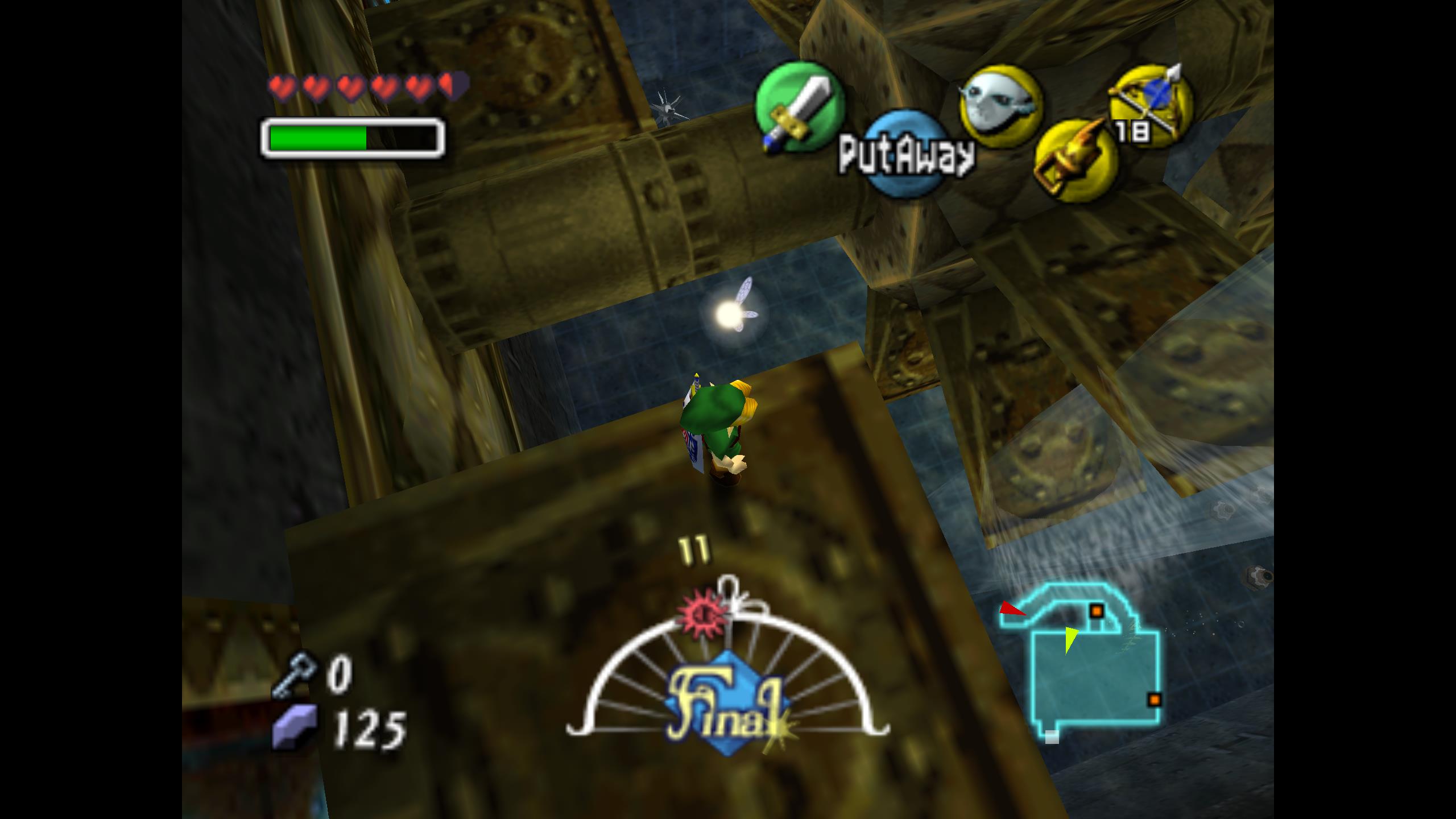 Easy, just freeze the water flow with ice and stop it. 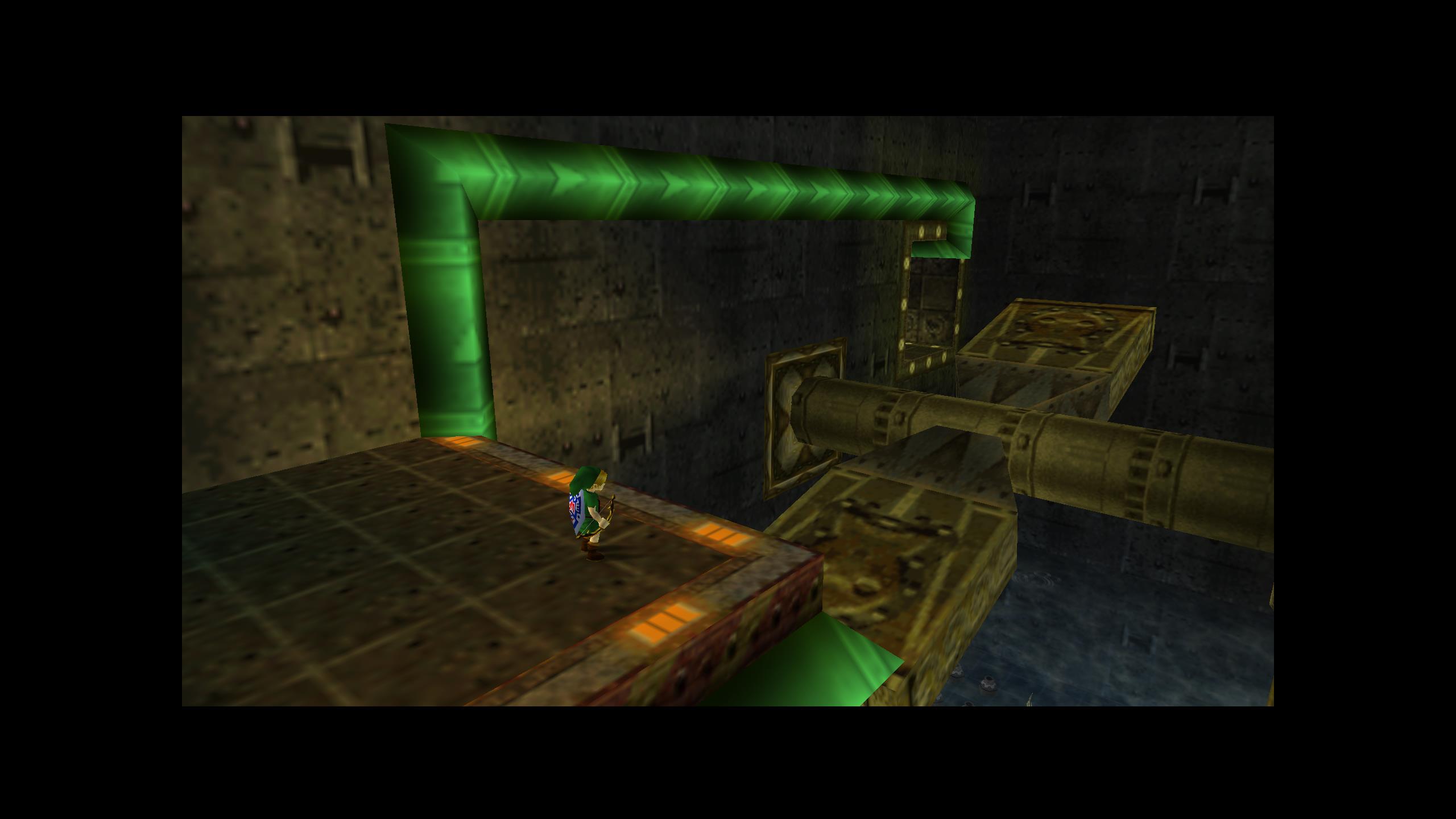 See how convenient it is that it freezes just as the platforms are horizontal? Absolutely not because I'm good at this game. How dare you imply that.

We continue our grand quest for plumbing glory! 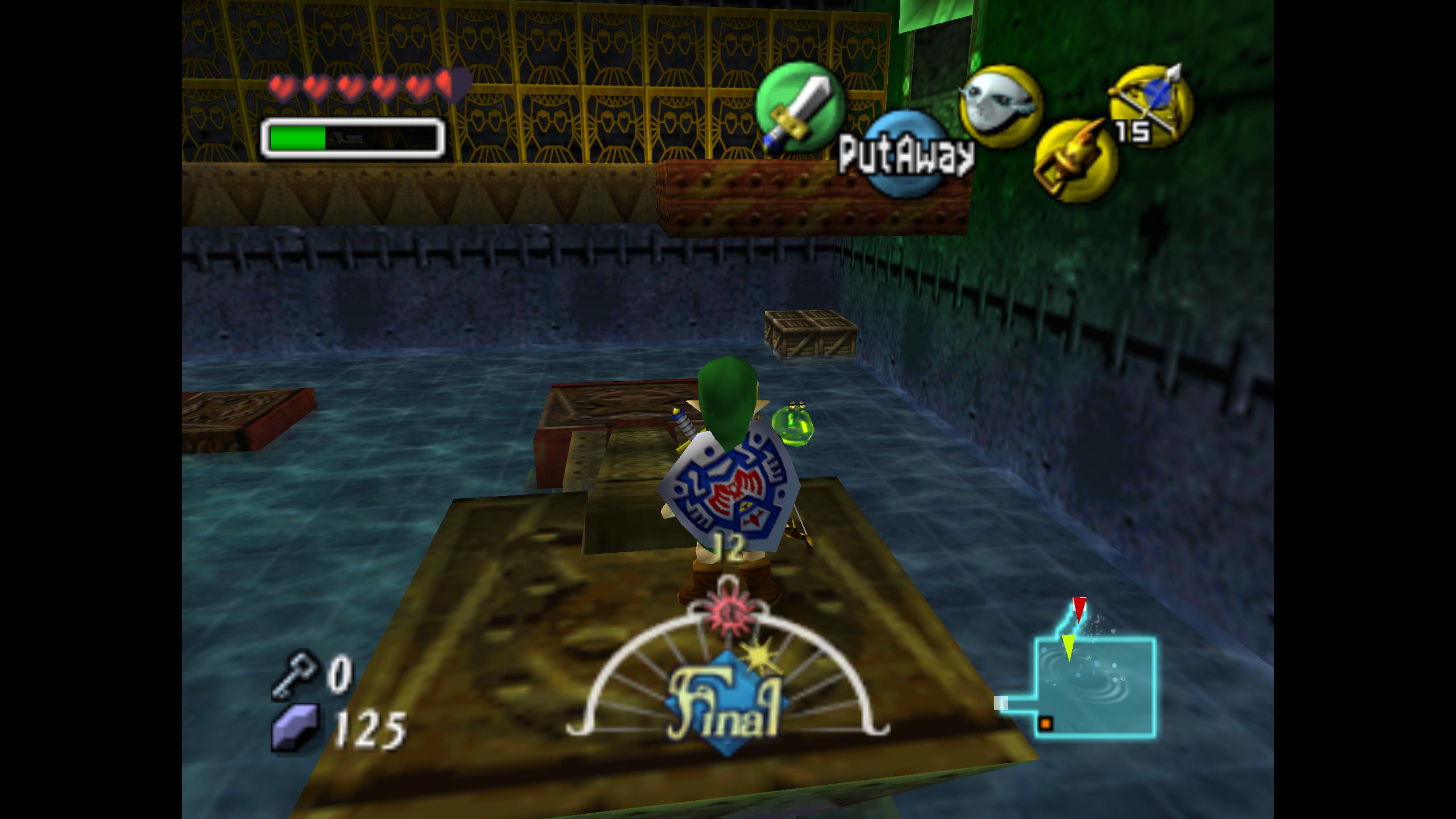 Well, there's a frozen waterhole above it, and shooting fire at that makes it go swoooosh and make the see-saw jump up! 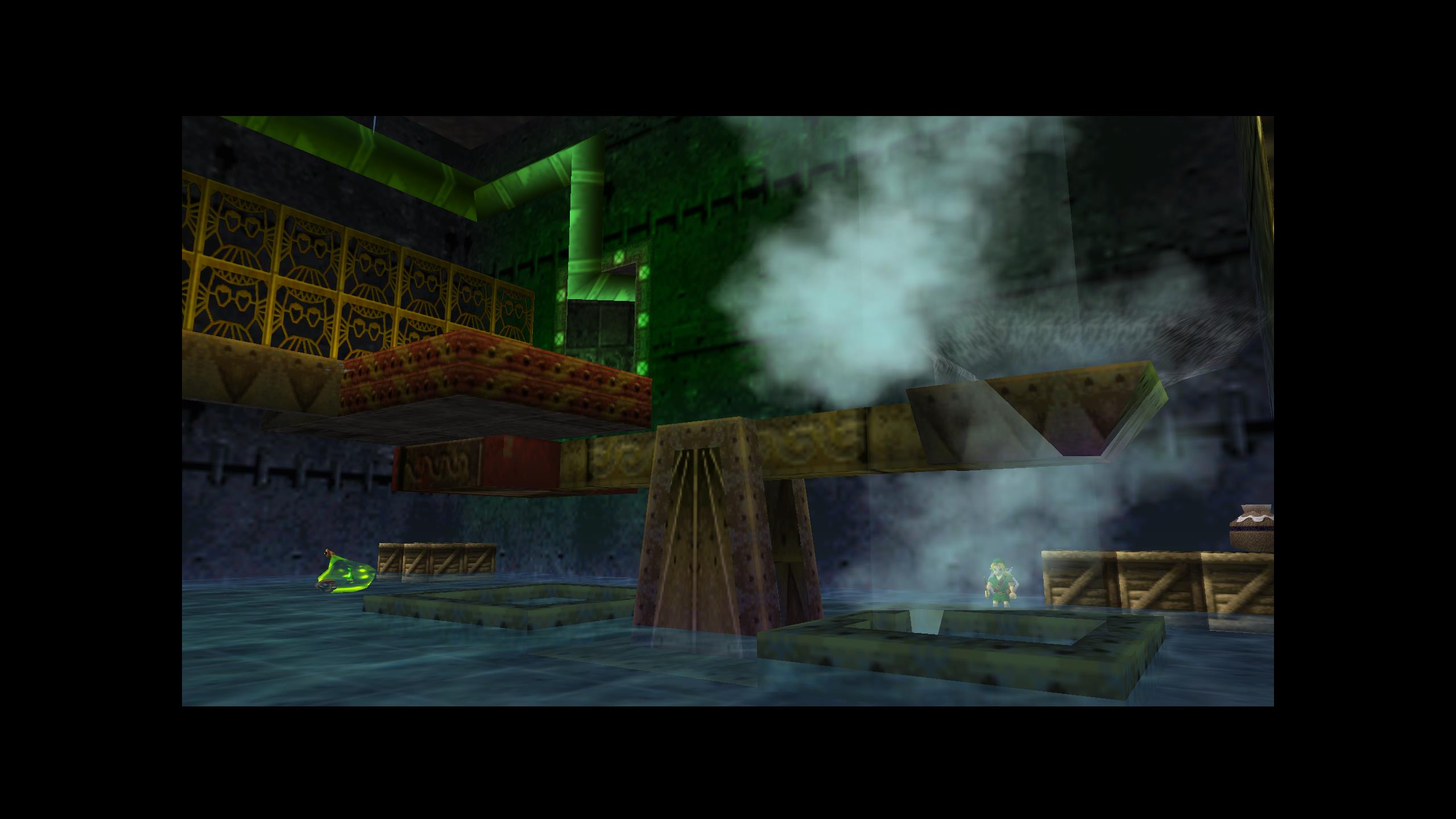 And with the power of editing, we do that again, but this time, have Link actually stand on the see-saw so it's useful!
Instead of just standing on the ground like a vegetable. 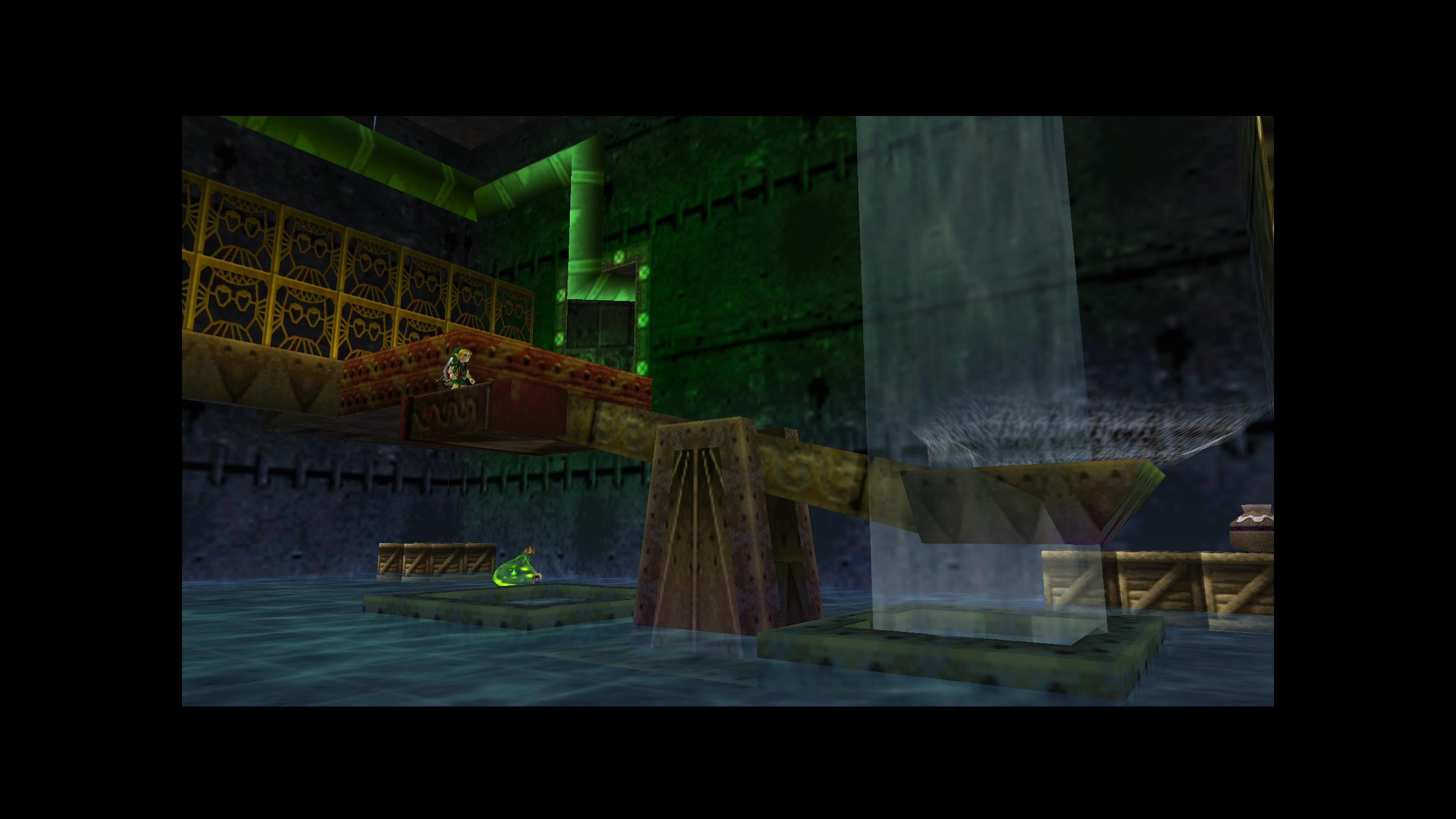 And then, even better, we learn that we should do this on the OTHER see-saw first, because this one just takes us back to the other room! 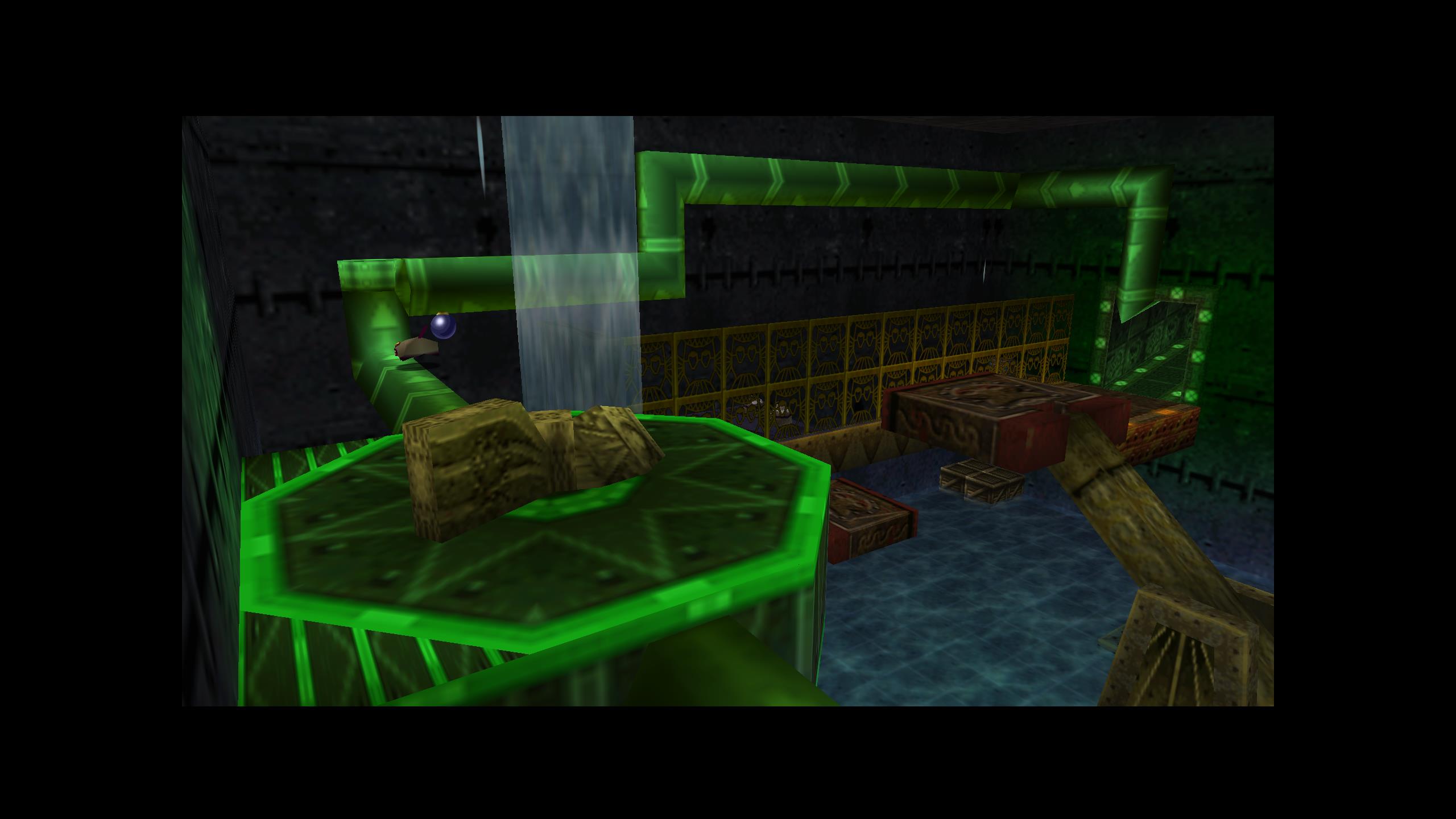 And, finally! We get up to the second green switch. And can turn that for maximum flow of goo.

All this was done first try without any issues. Link is a natural plumber. He'll fix all your... flow issues.

Back in the main room we circle round the water (counterclockwise, remember. This is important) to this final room where there just happens to be a big important looking door. But First: 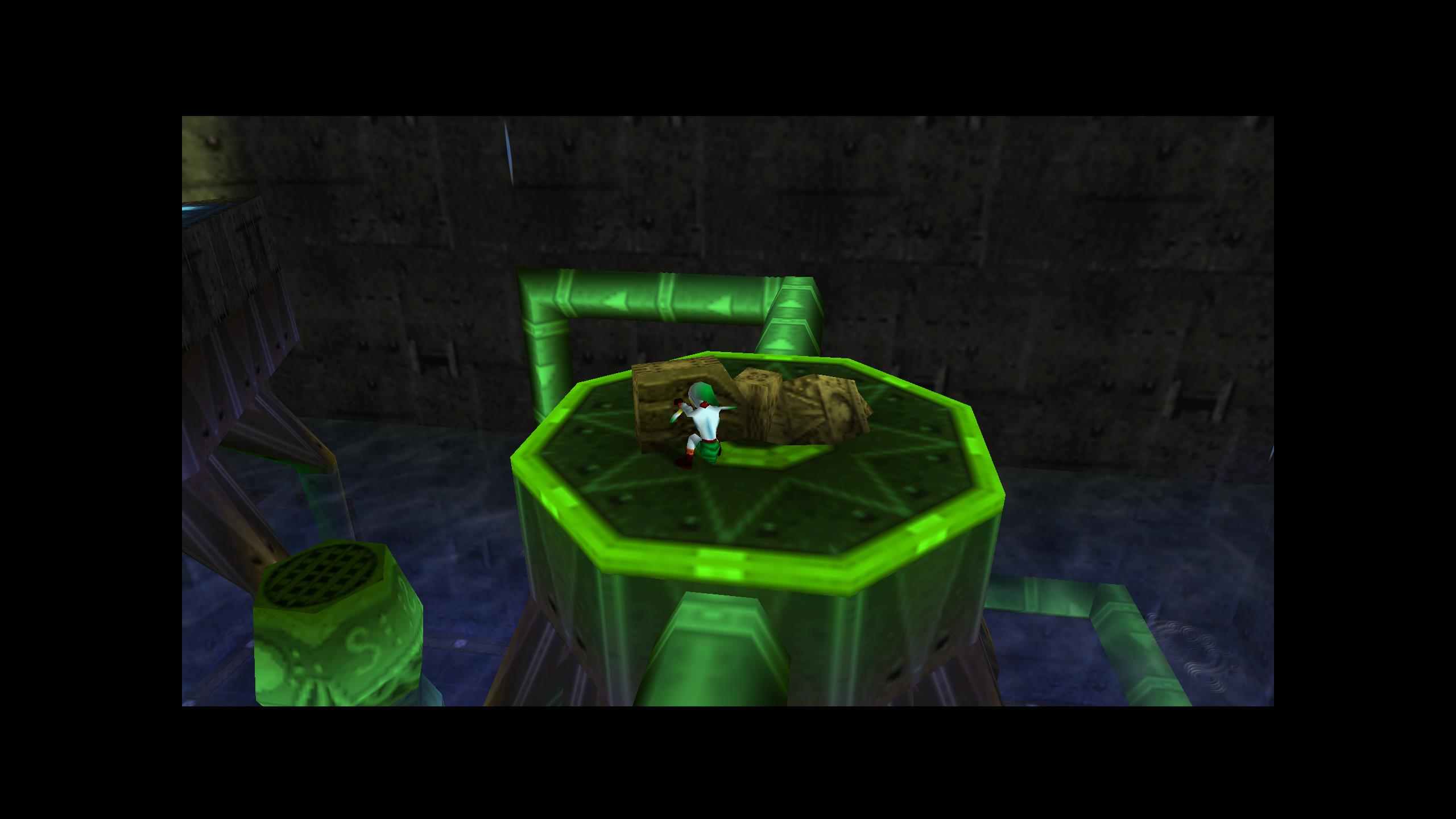 Now all is right in the world. We can now begin our cooking lesson once again.

And it'll all happen behind this door. 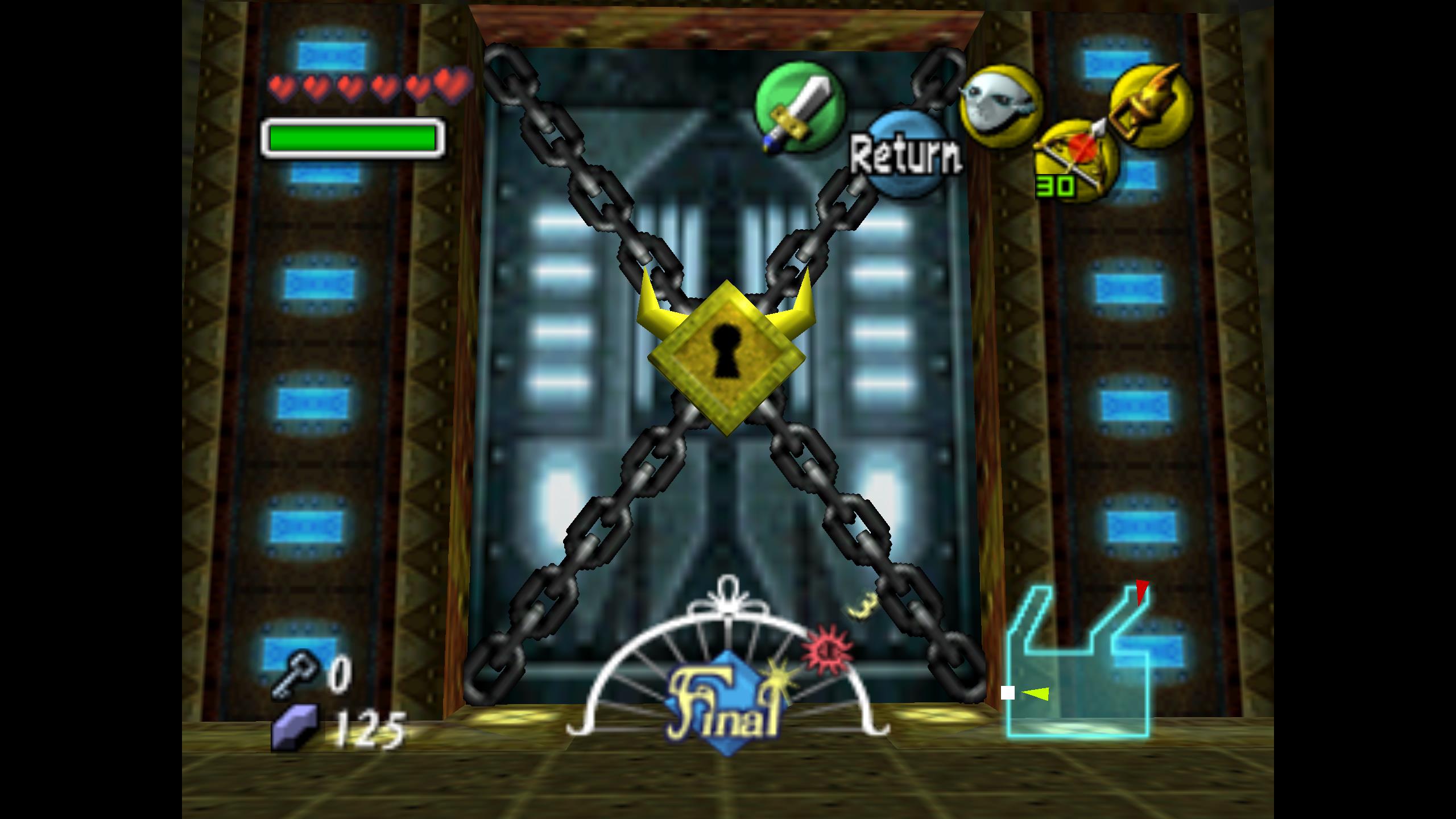 Next time. Because this took so long with a bunch of deaths I didn't write about so I'm also making this a slightly shorter one! Sorry. But we should be done with this temple next and finally be out in the open world for some shenanigans again. Let's hope, at least.