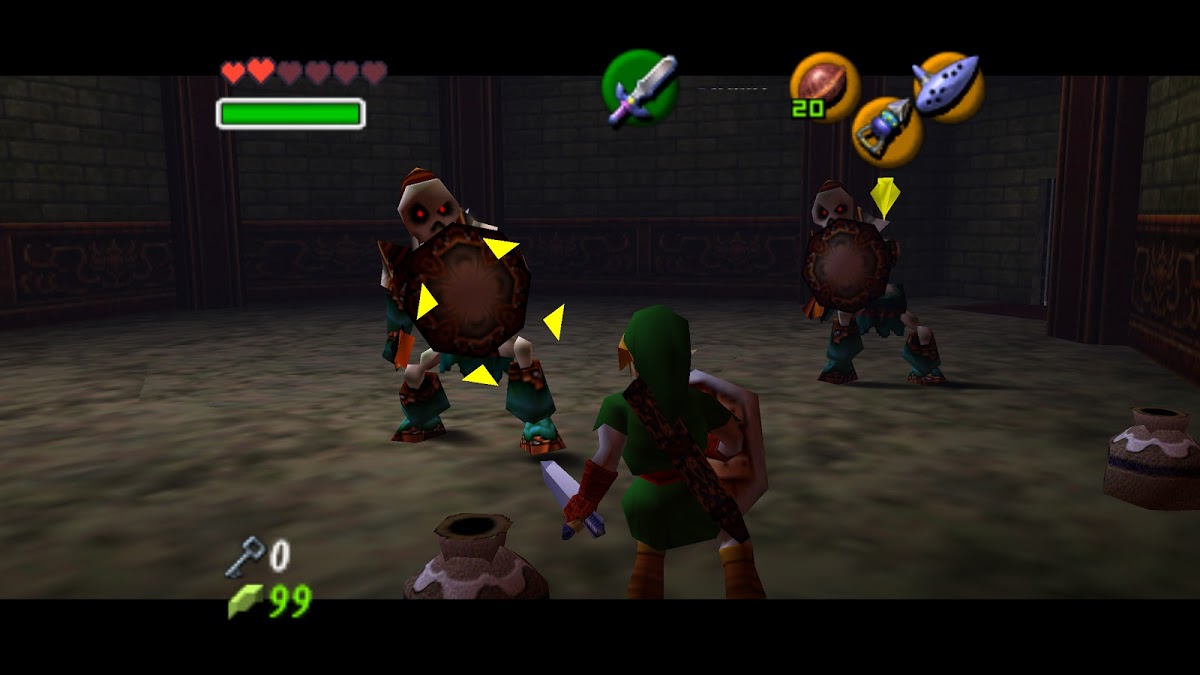 Very kind, old me.
Fortunately, this fight is pretty exciting. The Stalfolk got shields and dash around, and I have to jump to evade and hit them when their animation allows it. It gives me some serious Dark Souls vibes right off the bat.
I kill one, but another one appears and stabs me in the back, and my little health doesn't allow for that.

Except! I had a fairy in a bottle! But instead of the fade-to-black death screen, the fairy pops out of the bottle (How? Could it always have done that? Why stay in captivity? Did it die?) and I regain all my health.

Reinvigorated by the surprise fairy I kill the remaining two Stalfellows and a chest appears.
And inside it, a bow! 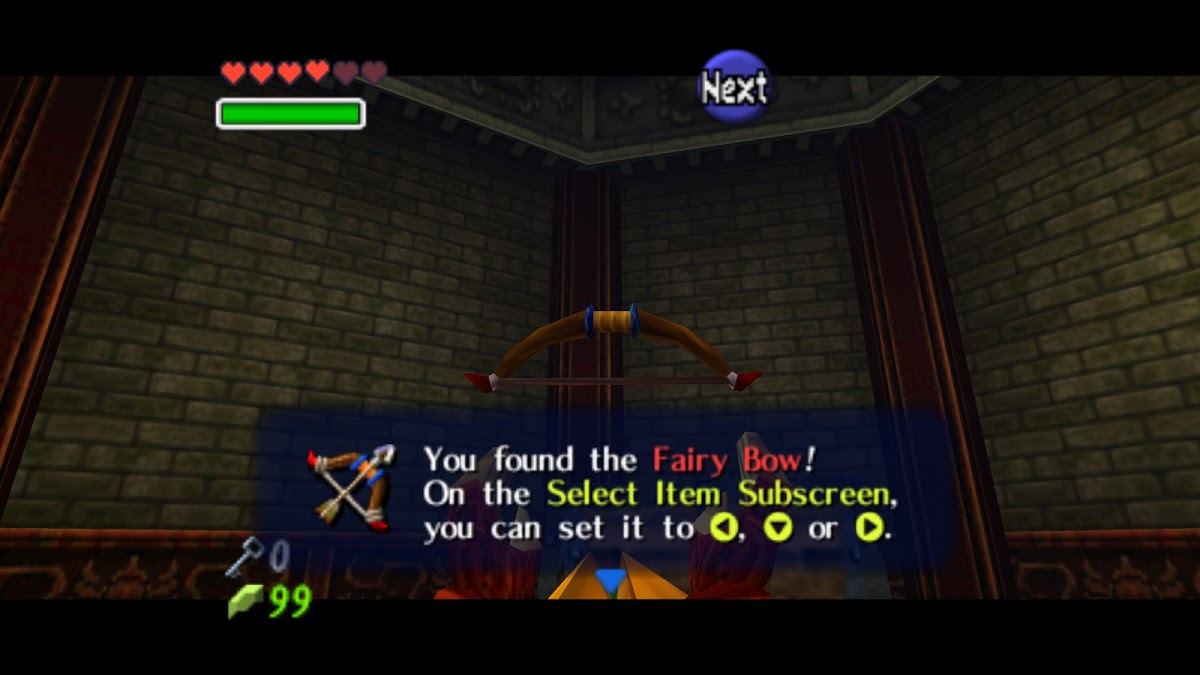 "Fairy" Bow? How do Fairies shoot with a bow??

New tool, time to go back and metroid our way back through this dungeon.

But I don't get very far. The previous room had these paintings with a ghost on them, but when I got close, it disappears.

New piece of advice: Shoot an Arrow At It.
Let's see what happens. 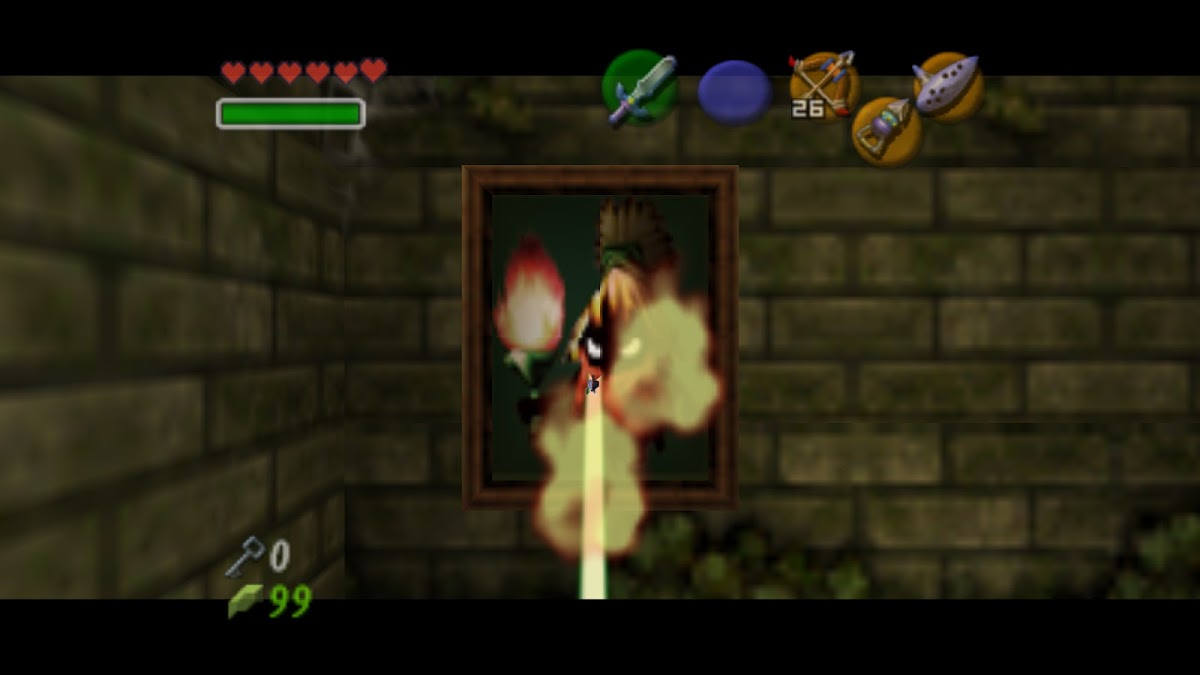 Yep! They burst into flames? Weird arrow I got.

When I shoot all of them, The ghost "Joelle" appears.The game calls her(?) Joelle.

She has two abilities: A spinny attack and the power to appear and disappear. When she's disappeared, I can't hit her.
And when I'm not close to her, she doesn't spinny-attack me.

So this is the most boring fight I've ever had.
I wait till she appears, shoot her once, she disappears, and I wait in the distance until she appears again.

If I got close I'd have to dodge her attacks, but I have a bow so there's no reason for me to ever do that.
So, I wait, and hit and wait and hit. Riveting.


But when she dies, the fire in the torch relights again that she stole in the beginning of the dungeon, as expected, so now we only need five.


Back to business: What's behind Door 4: 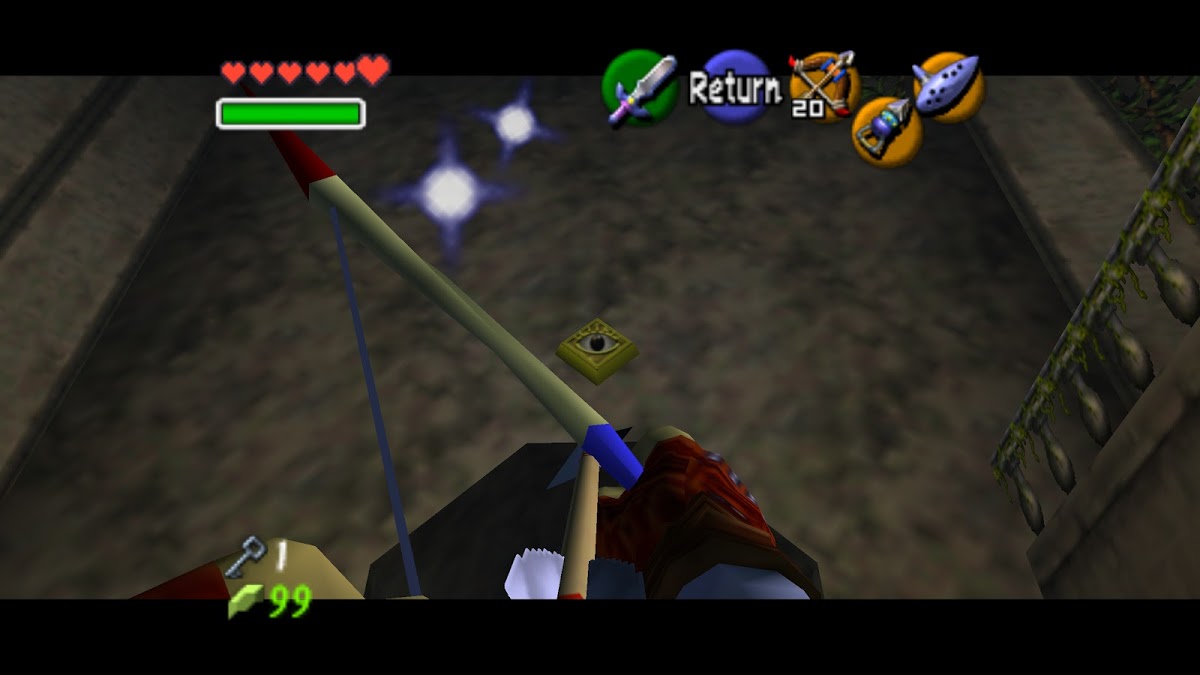 Will this bow work on these things that I could've just shot with my slingshot?

Yep. Ok. Shoot an Arrow At It.
So, these eye things have been in other places and I was able to shoot them with my slingshot or boomerang (recall this situation from Episode 2(?) where I learned that), and I still have those items in my inventory. The only reason I couldn't, was because the game wouldn't let me equip them.
Instead, I can now shoot them with my bow.
...
Don't give me the same challenges and force me to get a new tool that does the same thing as my old ones. That doesn't feel like progress.
Give me an item that solves another challenge instead. I just got a hookshot! Use that a little more? No? I've used that only to get into this place, but not once when I was actually in here (yet, to be fair). But this seems pretty silly.


But anyways, what's behind Door 4?
An area... I've been in before? This, at first looks like the area behind Door 2. Except, no, wait.. Hm.. there's a well. That I jump can in since I lowered the water last time, and down there is a sewer tunnel I walk through and get to...

The Door 2 Area. So I had been here before! I came there from Door 2, and went down when I lowered the water. I just didn't realize this was behind Door 4.

So that got me nowhere.

That was about the only new option I remembered, so I'm more than a little lost look around a bit, but finally look at the map a bit more.

And that's when I realize there are actually 5 doors. 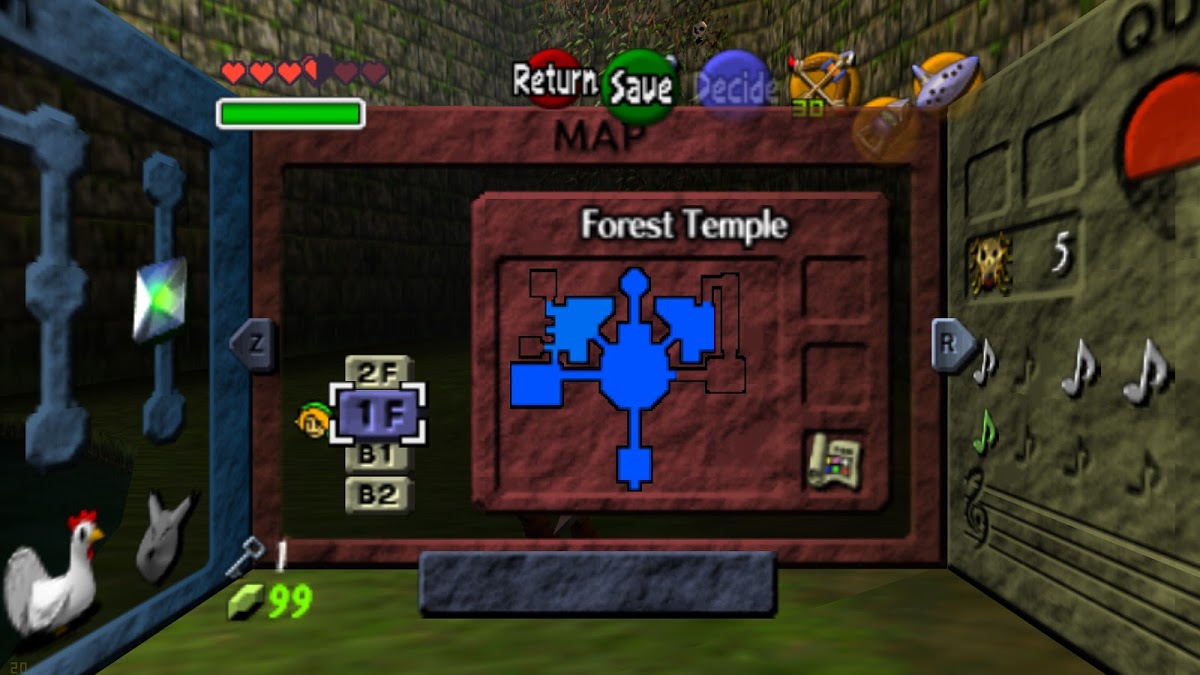 Center room is the Center room. The bottom door is the entrance and thus not counted in. Door 1-5 is clockwise from the bottom. Door 5 I can't enter because it's up on a ledge I can't reach, and thus not one I counted previously.

So there's a Door 5 area I can't reach, but there's also some bits through Door 1, 2 and 4 I haven't reached yet (you can't see all of that here since some of it is on the upper floor.)

Eventually, my wanderings take me back through Door 1, to the twisty corridor, and I see there's another eye above it. A shot later and the corridor is straight!

So now the room behind it has rotated the right(?) way around and I can get the chest I couldn't last time. 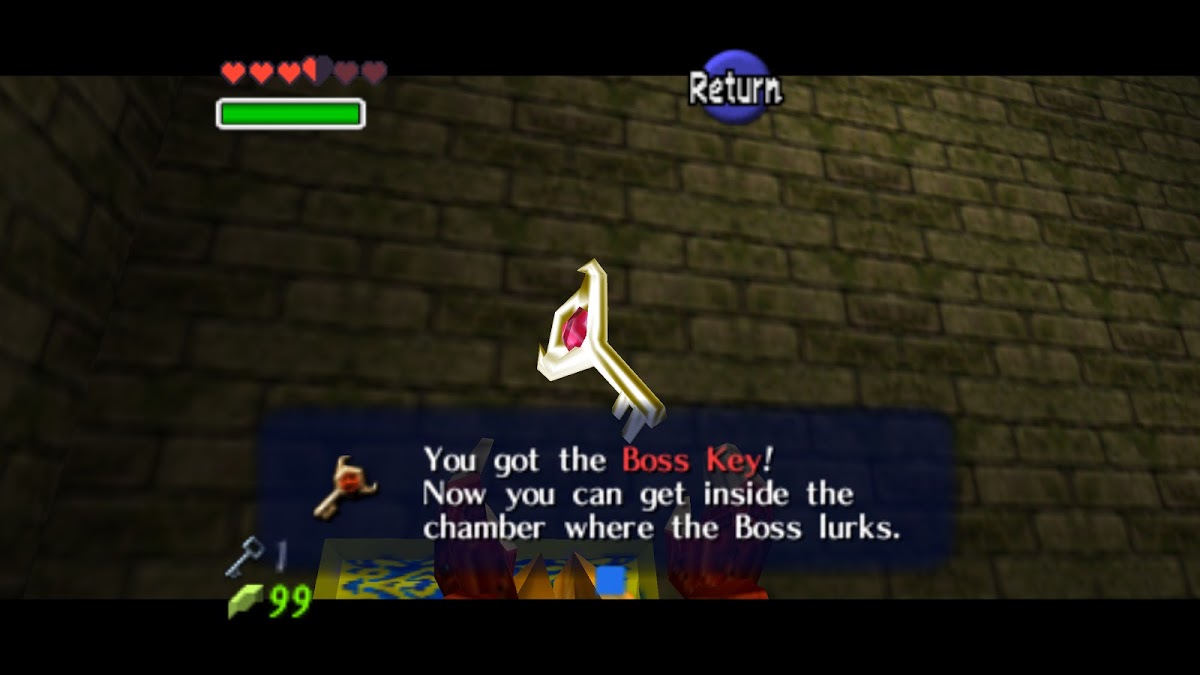 Nice of the boss to wait for me there. Sorry, "lurk". Feel like that use of lurk is pretty pointless.

Now, instead of a door to the right, though, there's a hole I can fall down. So I fall down.

This leads out to a ledge above Door 2 (how that geometry works, I don't know) with two doors: 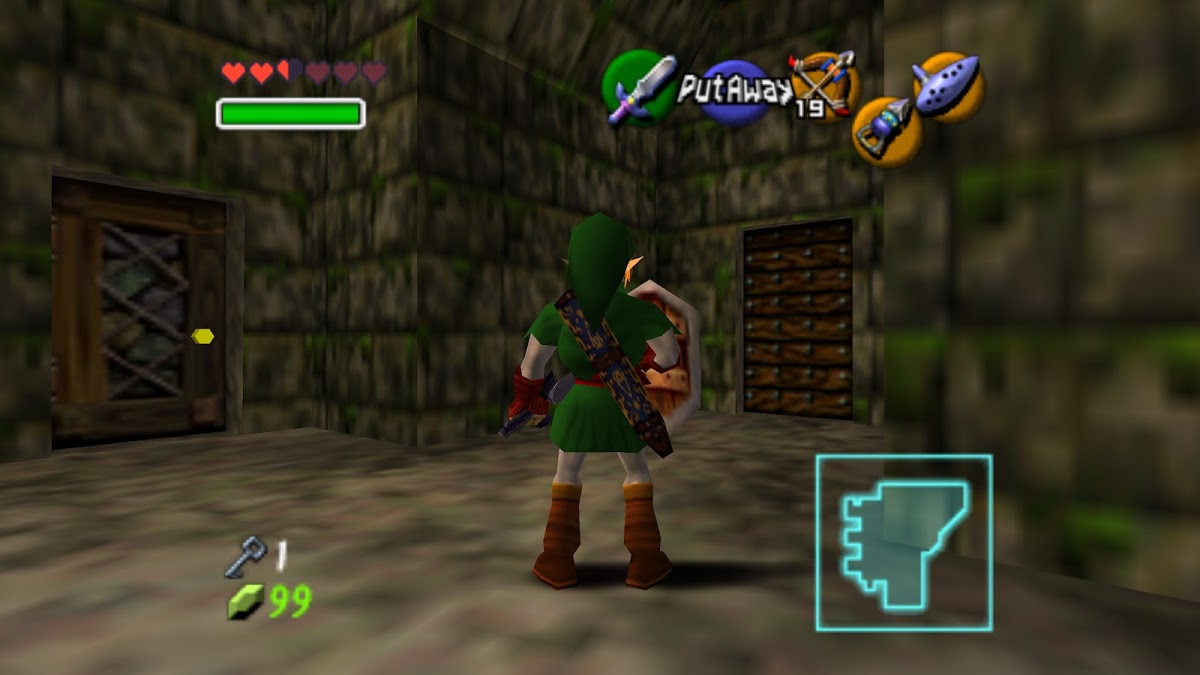 Door left: Leads back to Door 1.

Door right: Leads to a tiny room with a Hand Monster, and a chest with a small key. 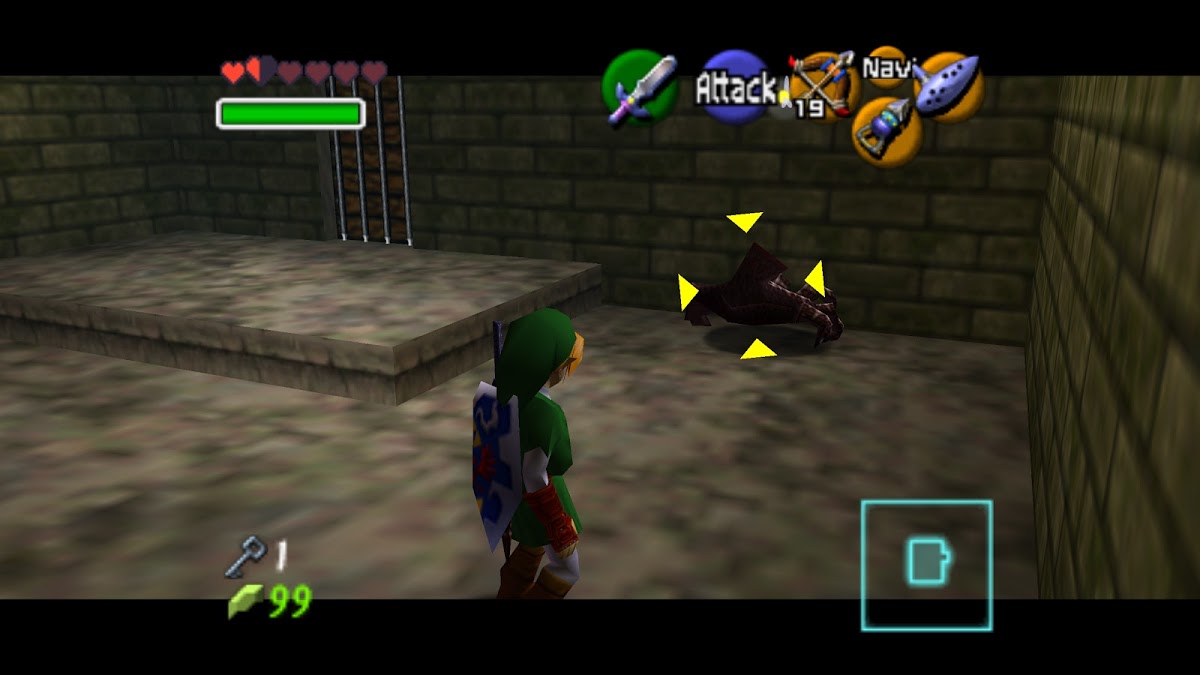 It's got its... backhand... facing us so it's a bit hard to see it's a hand. But it's a big Frankenstein Hand, aight?

So now I have 2 small keys and no doors to open them with.

I have a feeling I did this dungeon in the wrong order?

Back again! I twist the corridor up again so I can exit through the door and not a hole and out the other side and guess who we have here! 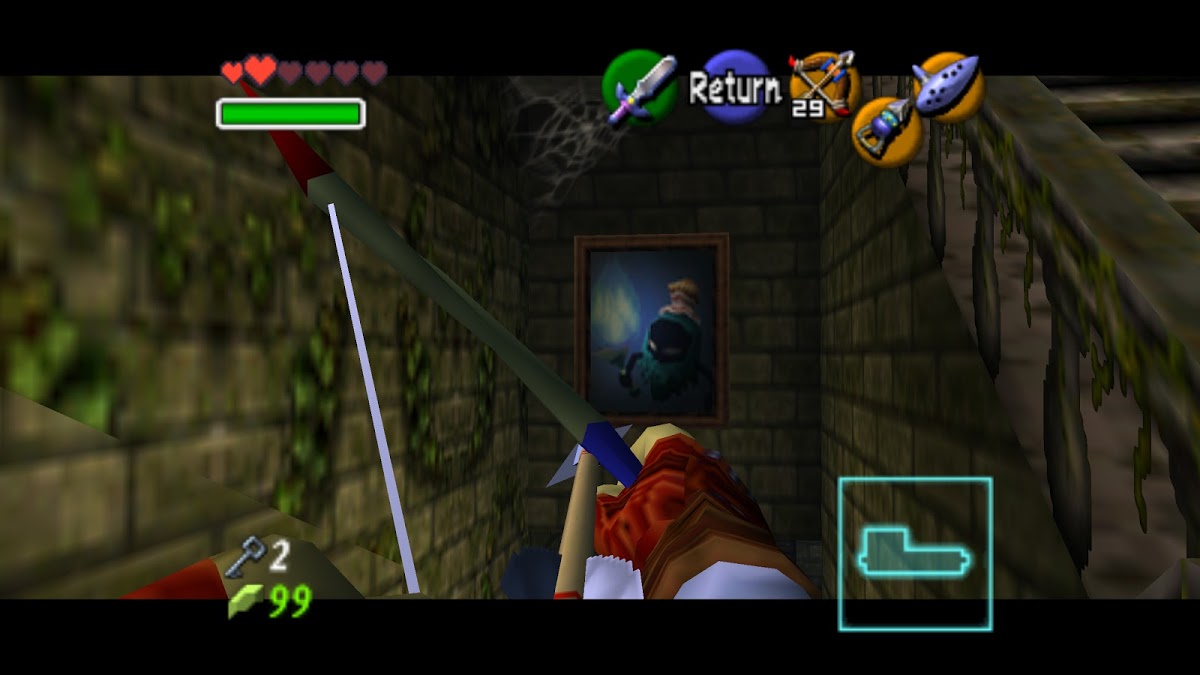 Shoot an Arrow At It.

Another ghost! (Forgot to check it's name!! Sorry! Let's call it Frank.)

I boring-fight Frank to sleep and get the compass! Alright, that's all the dungeon items down, I think. Now there's only two more ghosts left and a boss.

And that seems like a good place to call it again, should be able to finish it out next time. Unless I get more stuck.

Sorry if these have been a bit shorter, but I've been writing these amidst other things so just focused on banging them out instead of dropping another week. Hope it's ok! We should be back to the regular schedule soon.