Last time, we found our way into the Fire Temple and Big Bro Goron told us to go kill the dragon rescue some prisoners for him, so let's be a Good HeroTM and do that!

First thing, we go out to to the first room and back the other way now that we've got a small key and then we enter a large bridge-lava area. 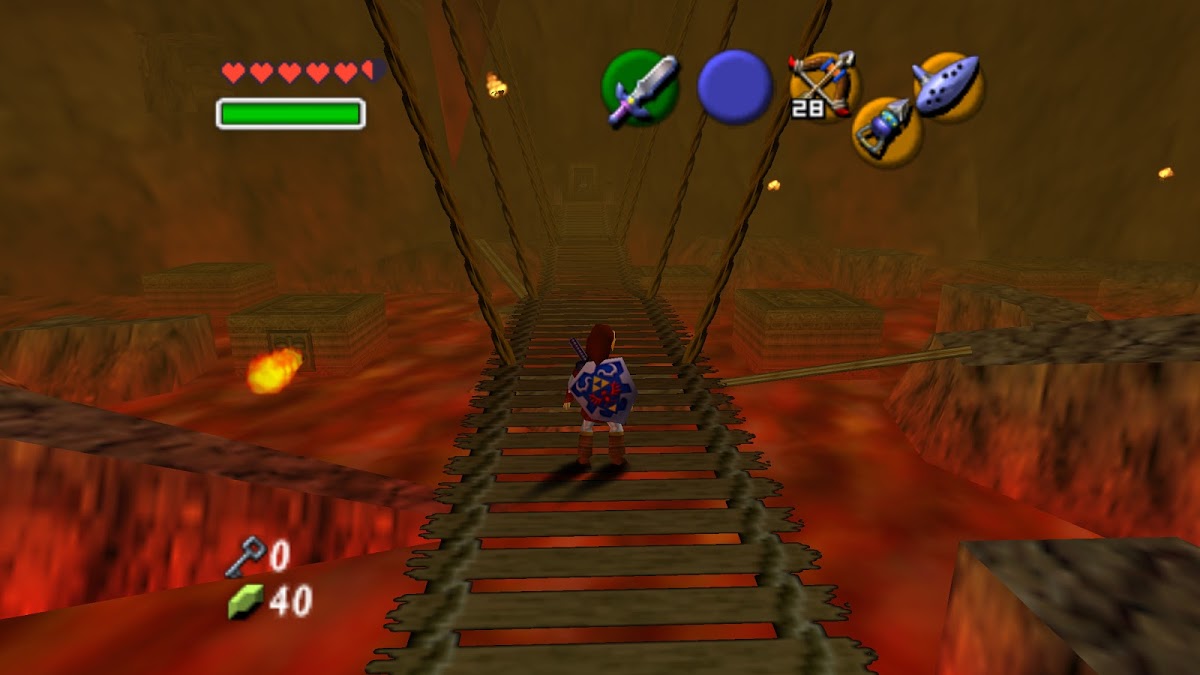 There is a locked main exit across the bridge and then two side doors on either side so I check those out first.

Want to see a magic trick? 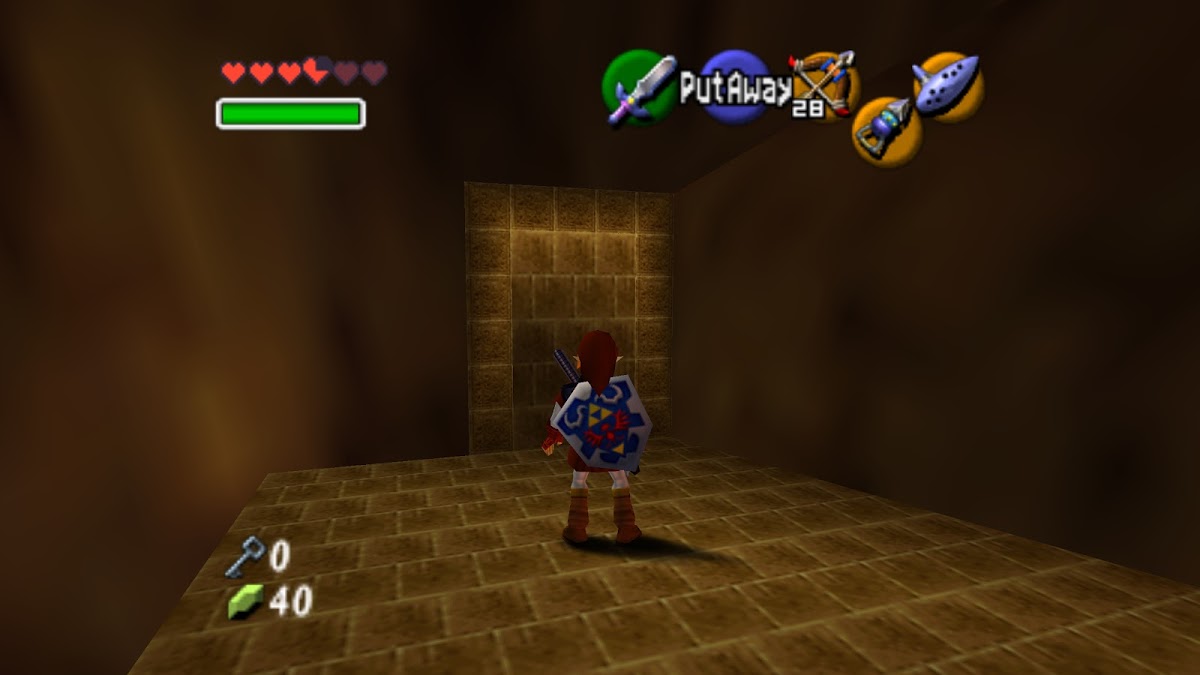 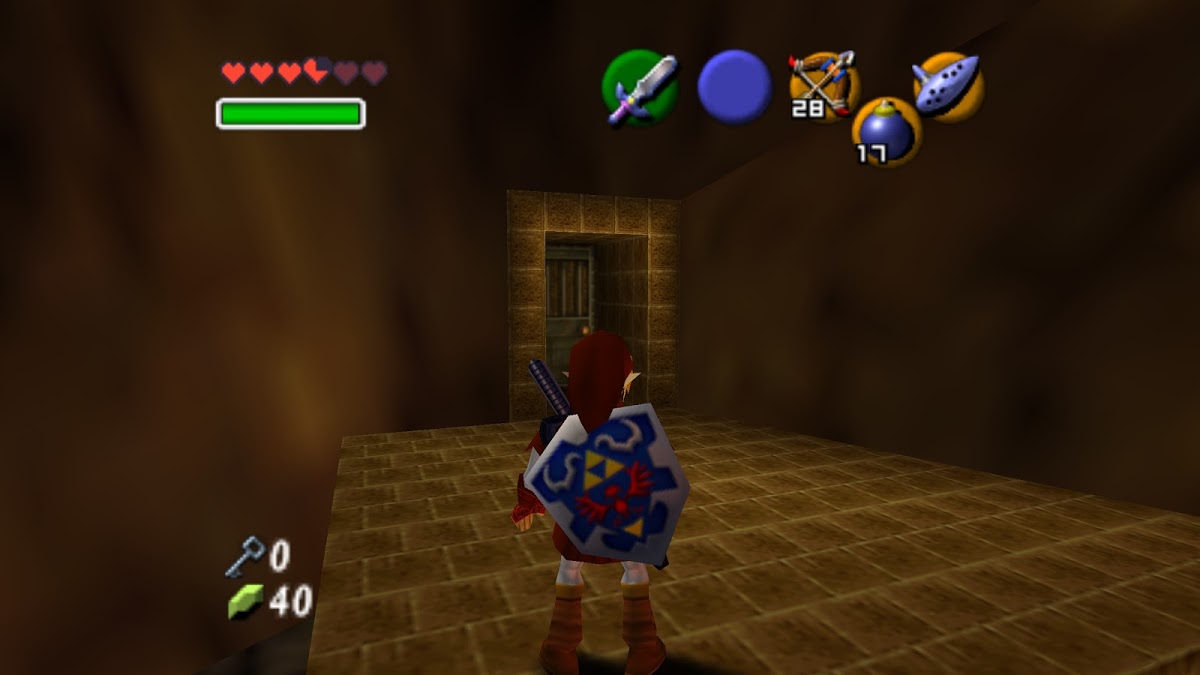 Tadaa! It's varge gone! (I never actually can hear what he said there, I always hear it as "varge" which... isn't a word.)

And behind that is our second prisoner! First of the day. 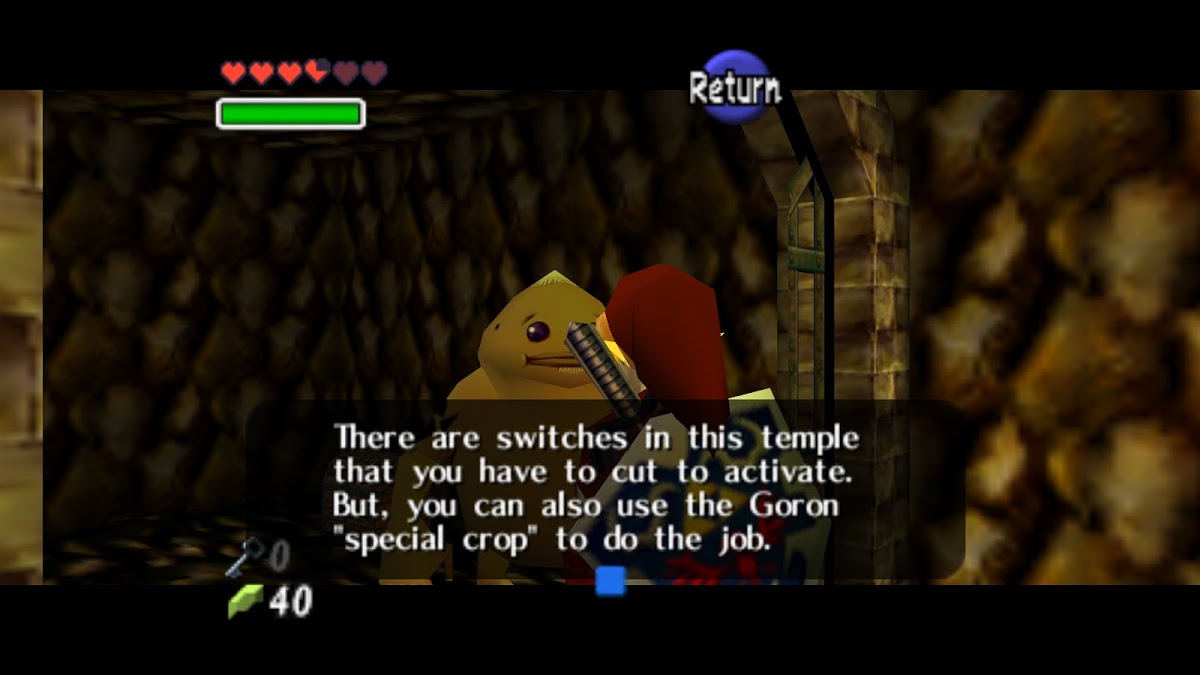 Goron "special crop"? Why are you calling it that?

Turns out though, that these prisoners are regular ol' tipsters cause they always got a tip for ya. They say it's a "thanks for rescuing them", but you and I both know their only purpose in life is to share tips with me, the player, because I matter.
And their life doesn't.

The other side has a door with a box over it, and the box has the Time Symbol so I play the Song of TimeTM and it... places itself in front of the door. Buut that reveals a new door above it!

So I go into this secret door first and in there are a ton of flying tiles (literally tiles that rise from the ground and fly towards me) and my new arch nemesis: 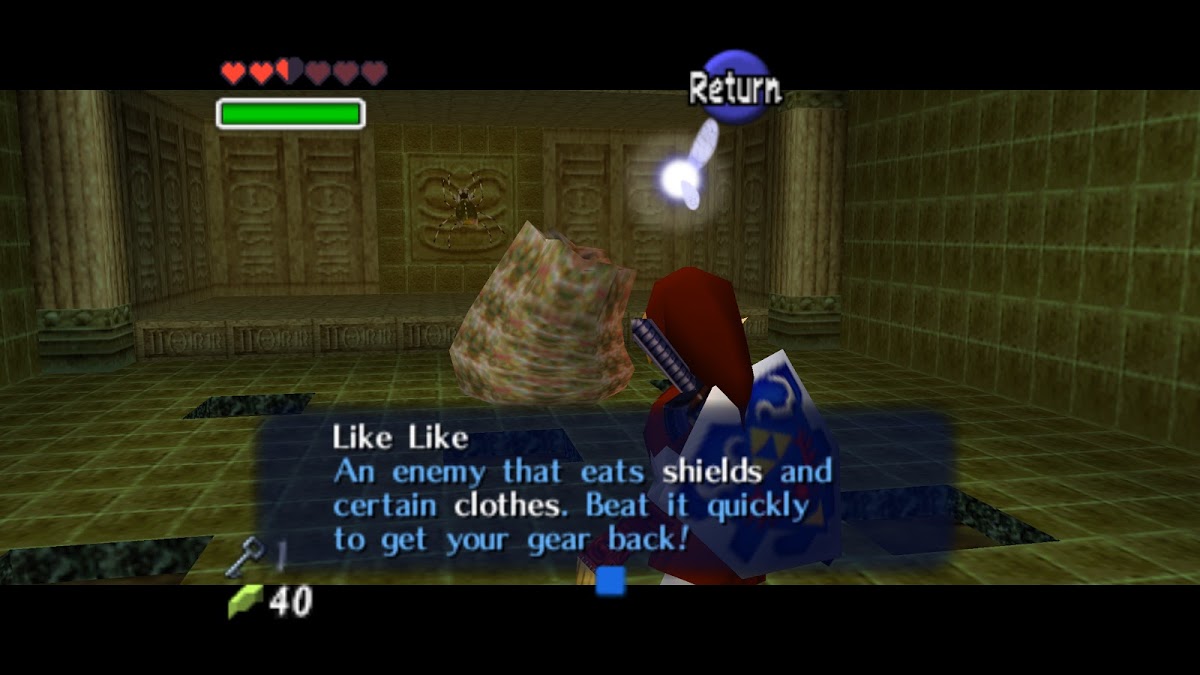 The Worst Thing In Existence. And also, Smiley! in the background.

So of course it ate me first thing. And took my shield and my tunic!
So I rush at it with full speed and get them back, thankfully. Meaning I have to go back into the inventory to equip them again, so it's more just a hassle than anything.

And in the room? Nothing. That's it. My new nightmare-fuel and nothing else. Gee, thanks game.
Behind the not-secret door was another prisoner though, so that's 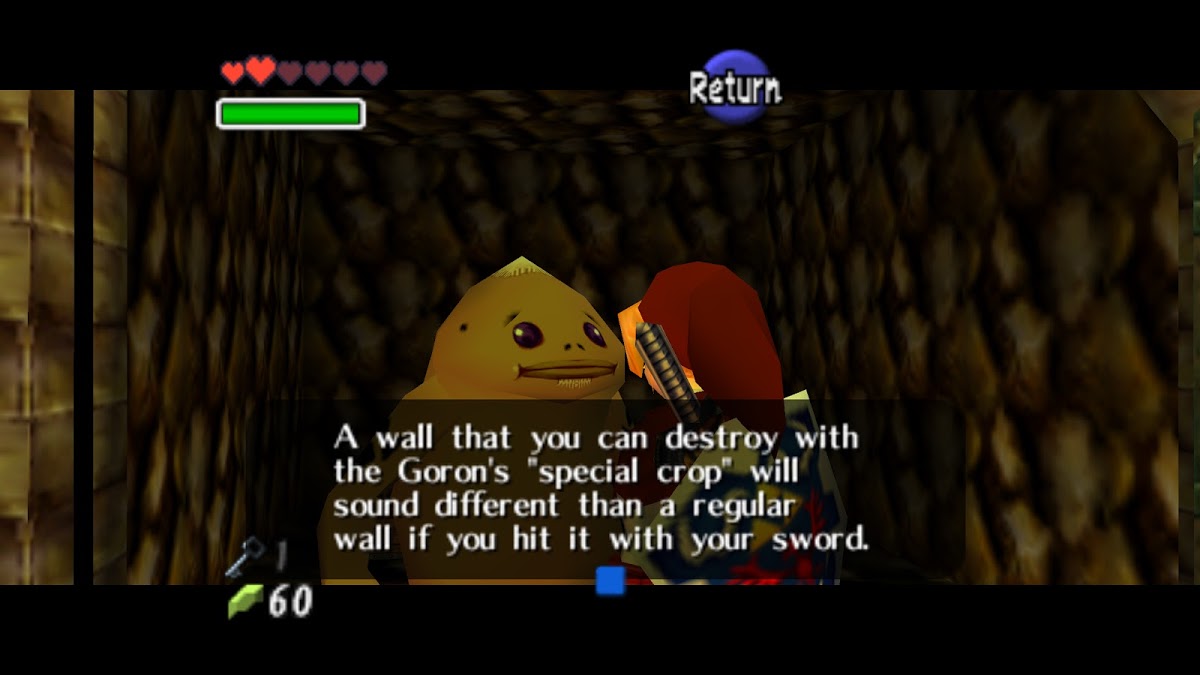 "Special crop" again? It's your crop. You can call it by name!

Behind the Tipsters were also keys so now we can go back out to the Bridge Area and unlock the door which leads to a room with a large lava-sun-beam. 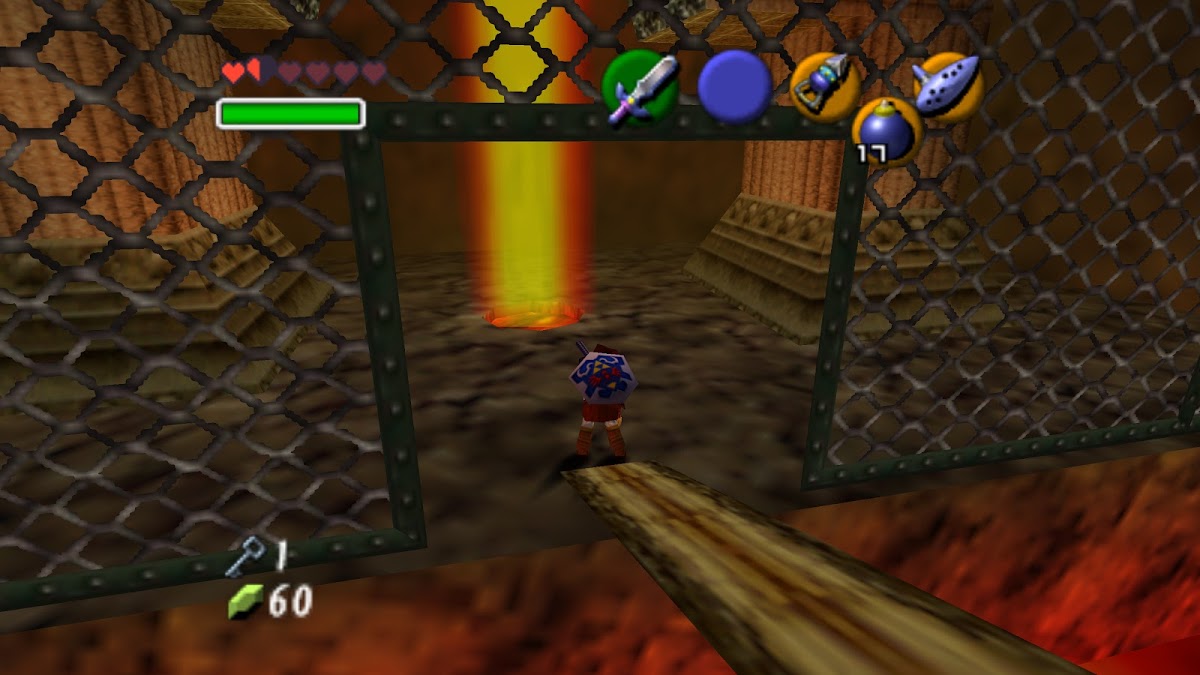 At first I'm a little timid about it but eventually, seeing no other option, I step into it.

Sooo, that's me again with no other ideas so I walk around the other rooms and check everything one more time before I realize that the grid by the sides there 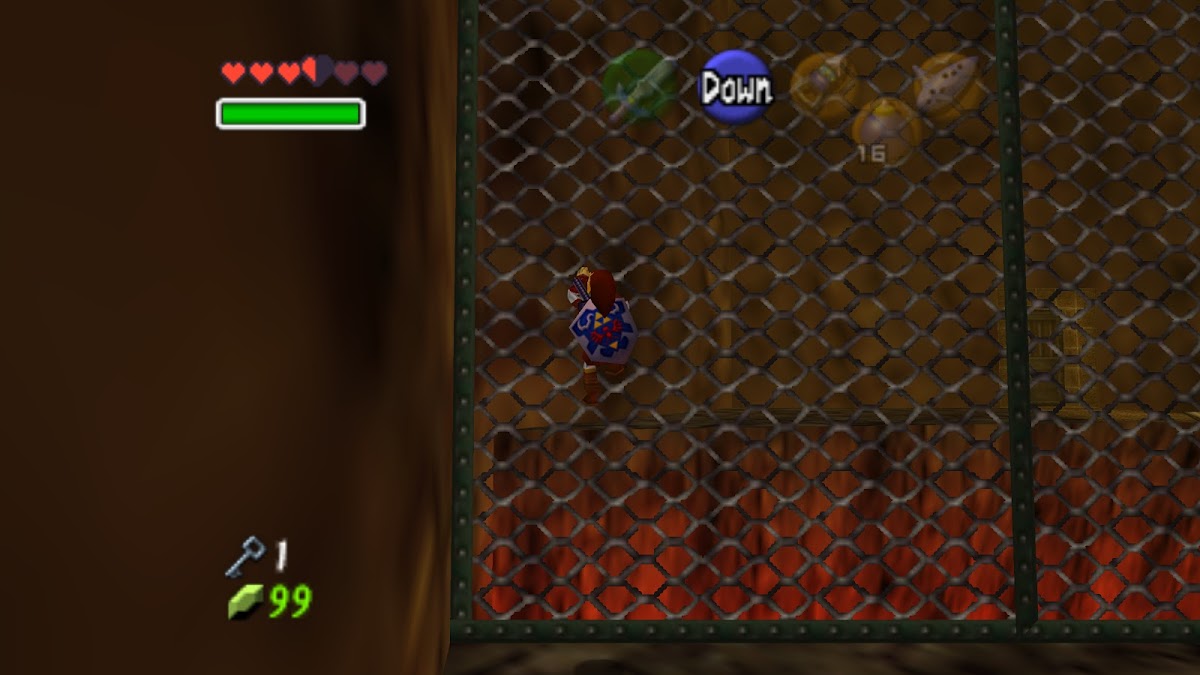 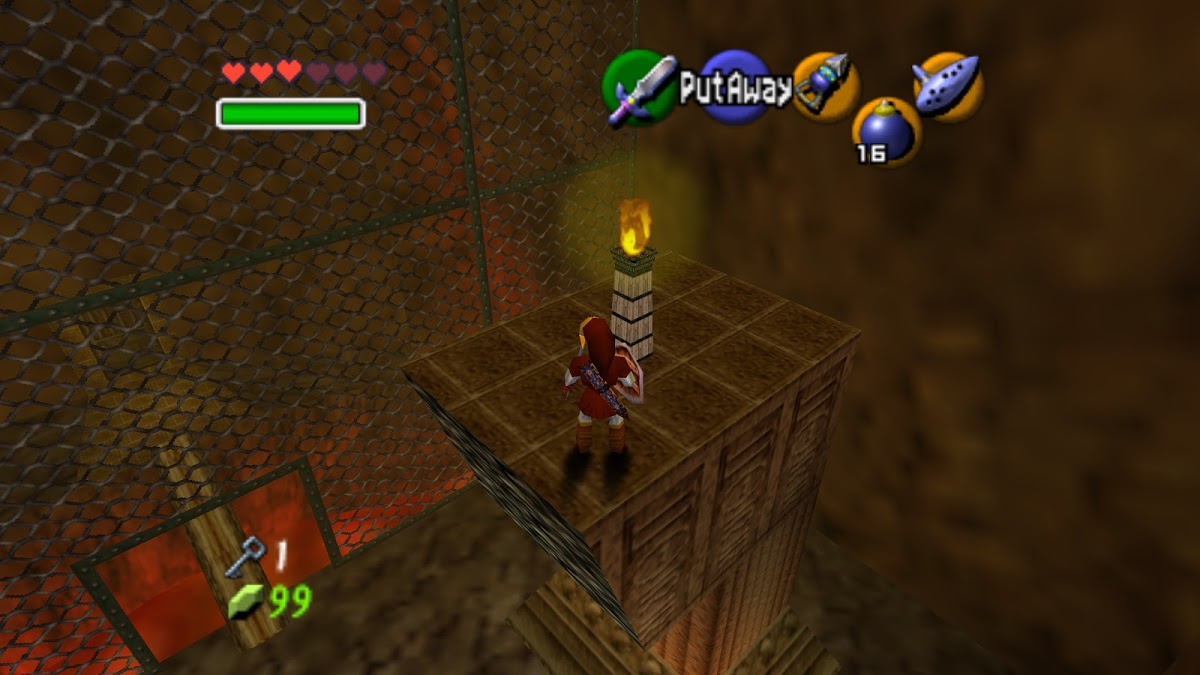 I'd wager we have enough fire in here to kickstart an incinerator business, not sure what I need this torch for.
Turns out, I don't, I just need to push the box down on the sun-beam to create the raddest elevator. 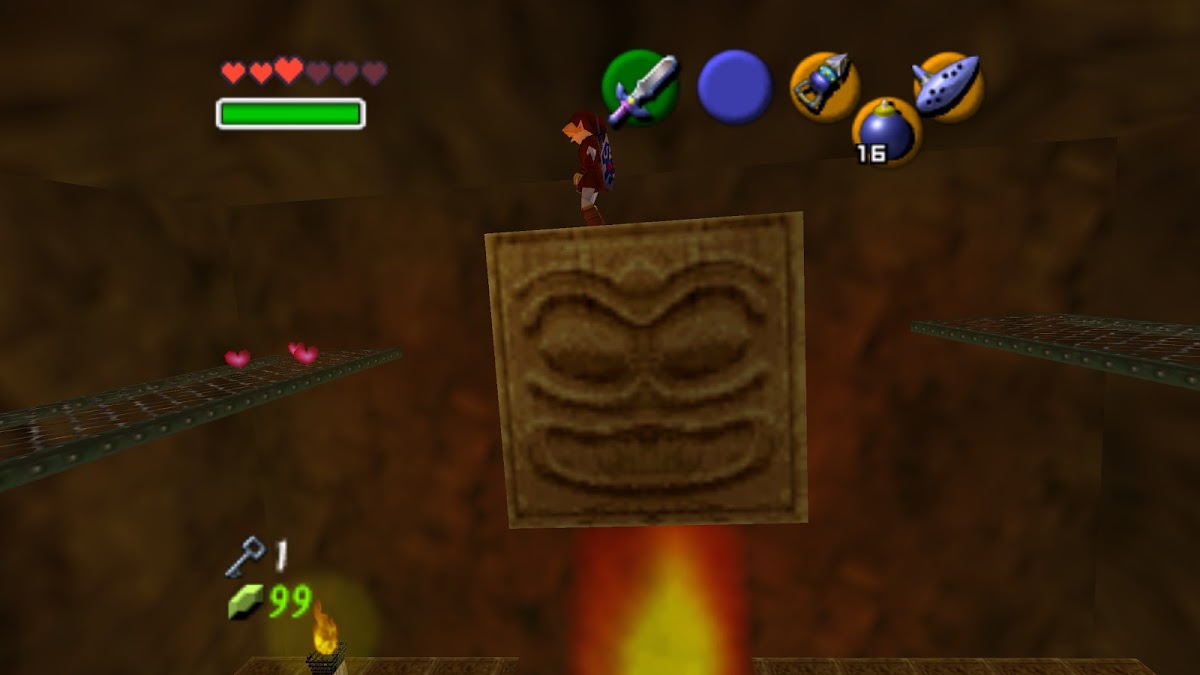 Smiley! And yes, that's me standing on a box being propelled upwards by the power of sun-lava.

Up there on the third floor (I believe) there's a timing puzzle where I have to shoot a crystal to squish out a fire in the right place for me to reach the grid above the fire and climb out and then the camera decides it wants to shake things up. 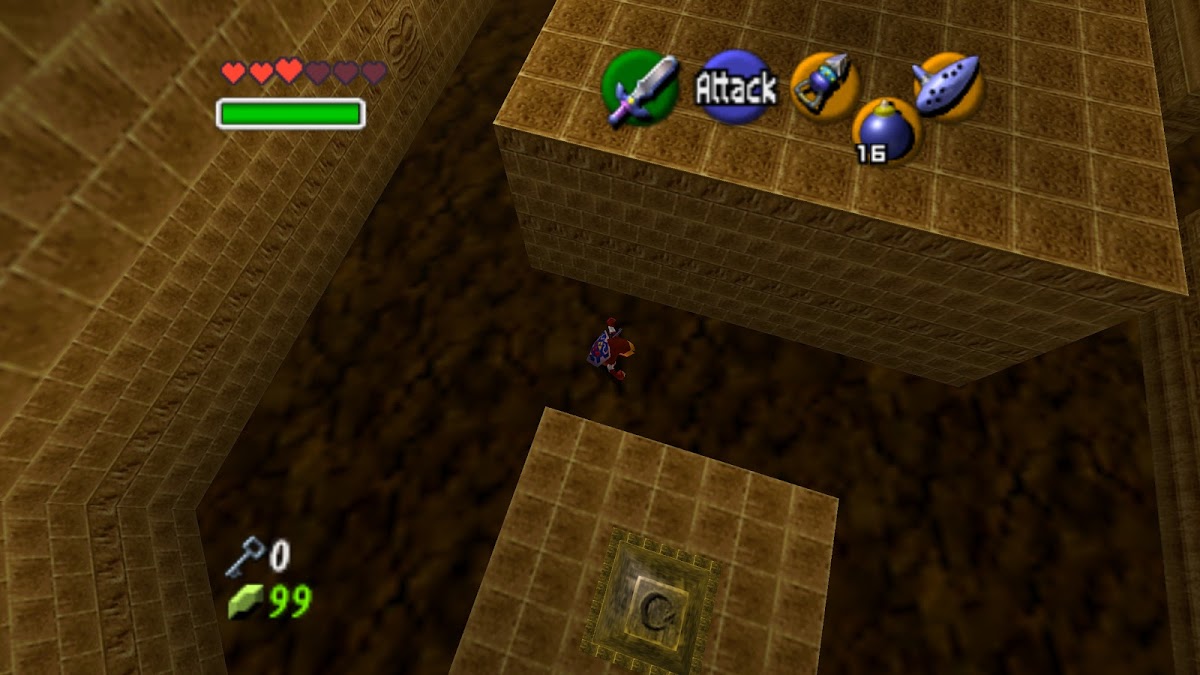 Forced Camera Change! You love it, I love it, everyone loves it.

In this maze of Overhead Camera, there are boulders rolling around I have to dodge and that's actually pretty fun so I run around a bunch while I find two more tipsters at the edges. 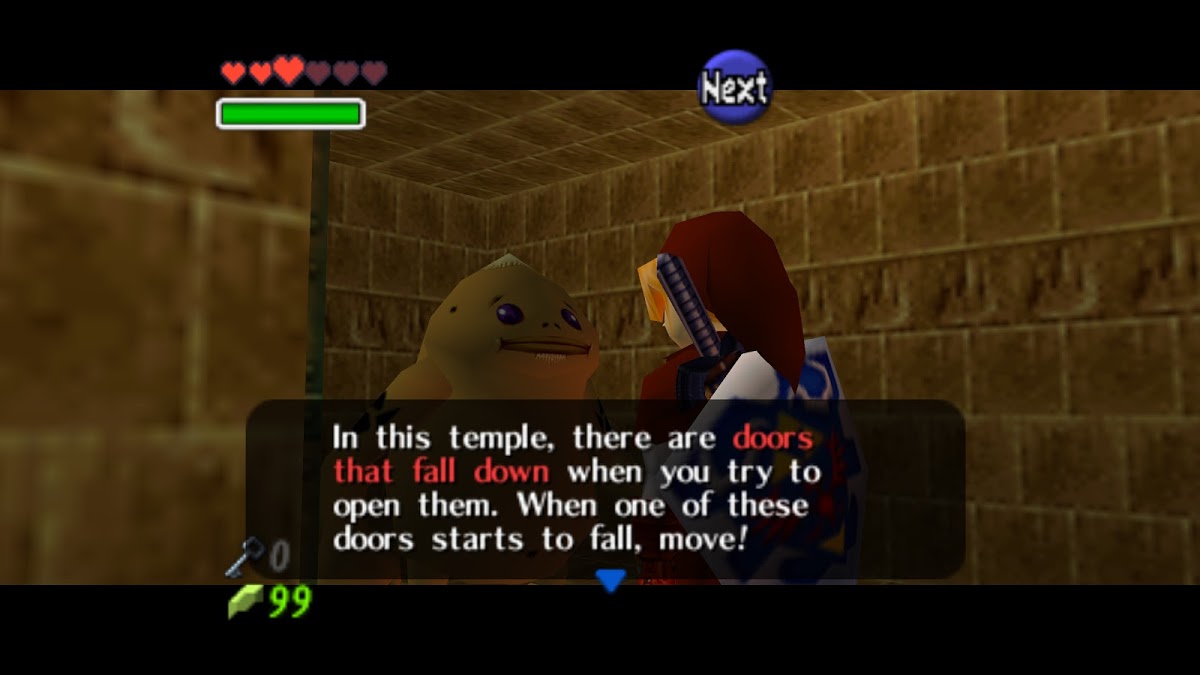 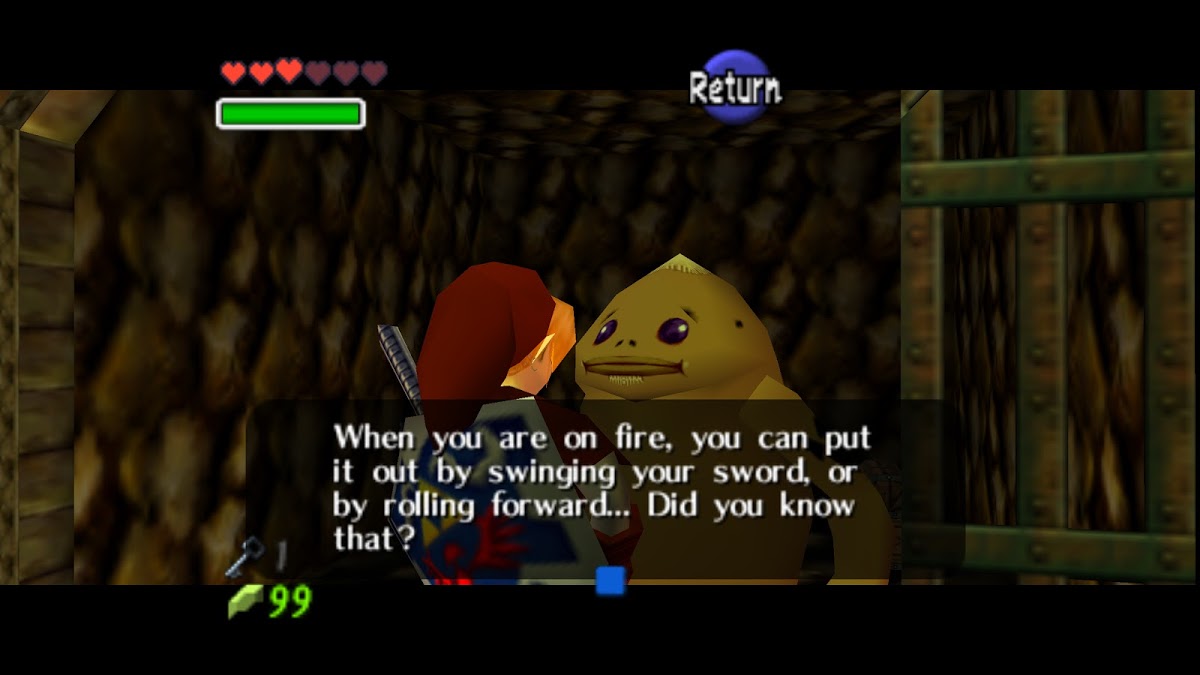 
It takes a while before I find the exit though, as it's stashed away in a corner and can only be seen from a certain angle, but finally I do and I arrive at a small little precarious room with an even precariouser (I know that's wrong) bridge of stone. Above is an eye stone I want to shoot but I step wrong and fall all the way down the hole and end up in the first Bridge-Lava area.


So another trip up the Sun-beam elevator later I hit the eye stone and go through a door and get the map!

And then back out the third door at the stone bridge and that's a kind of half-circle room where a firewall is chasing me around (the literal kind, not the security software), and by the end I go out and go atop the labyrinth of Overhead Camera! 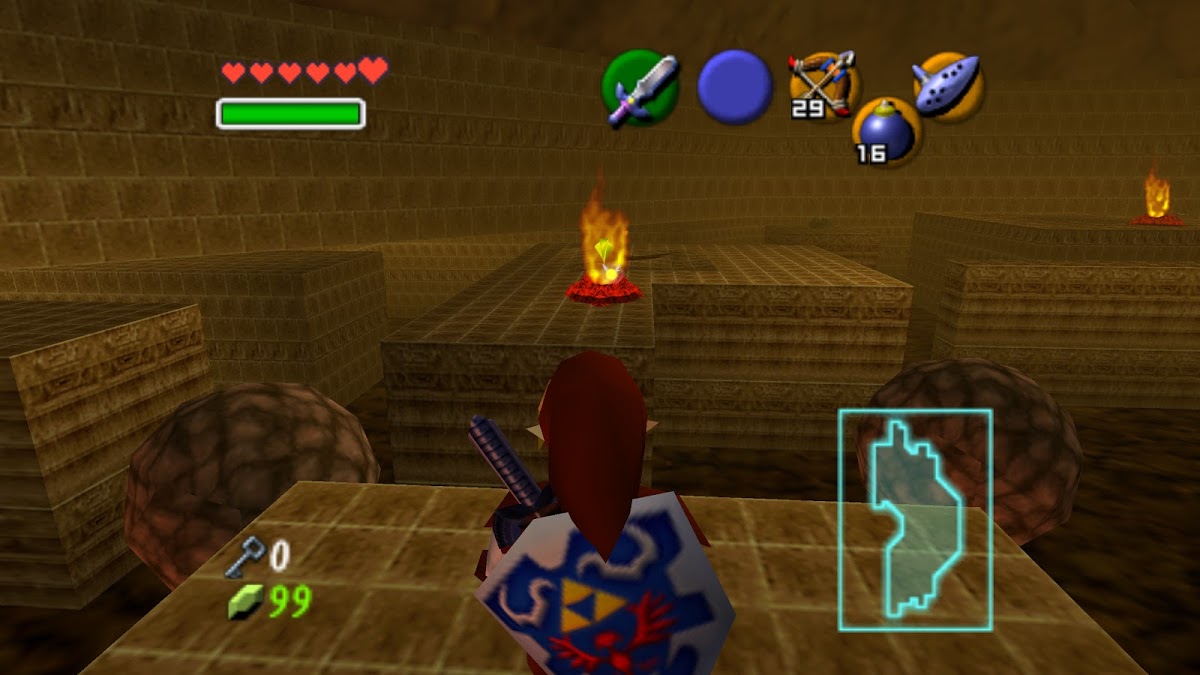 This is a thing this game likes to do a lot and it's a really clever trick to make you feel mastery over a space when you're now running atop the place you frantically tried to survive through moments before.


Up there is a cracked floor so naturally we try the "Goron Special Crop"TM and find that it works wonders to clear up any confusion as to whether or not there's a hole in the floor. 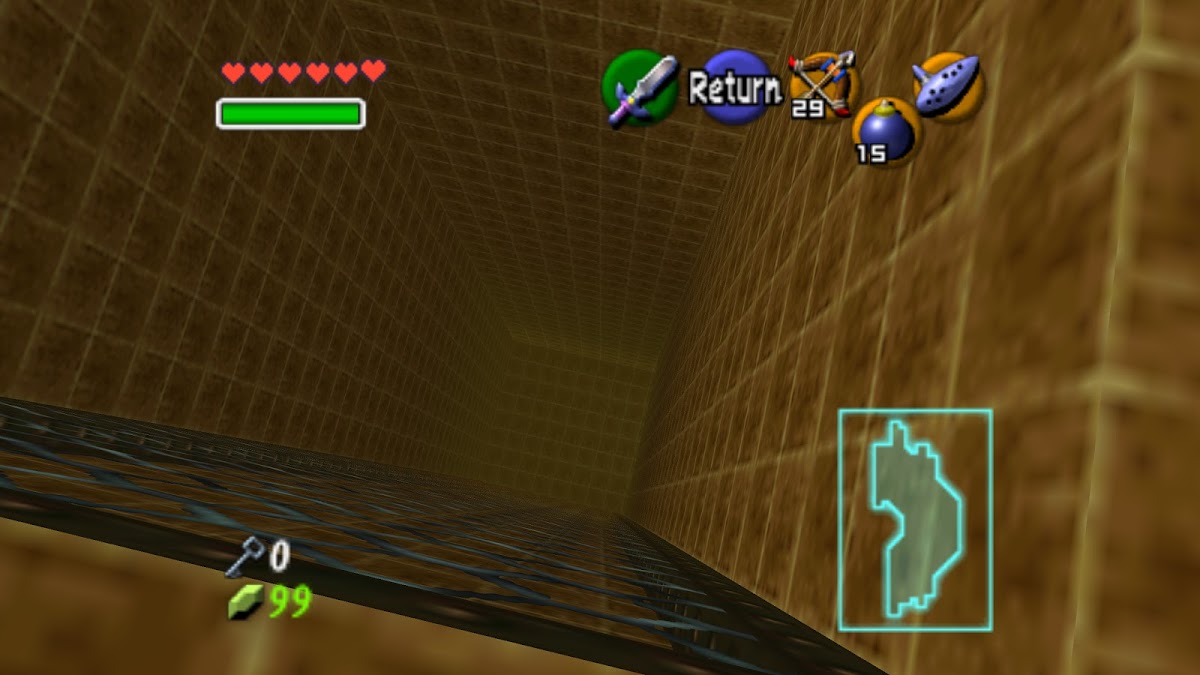 All the way down the hole is another Tipster. 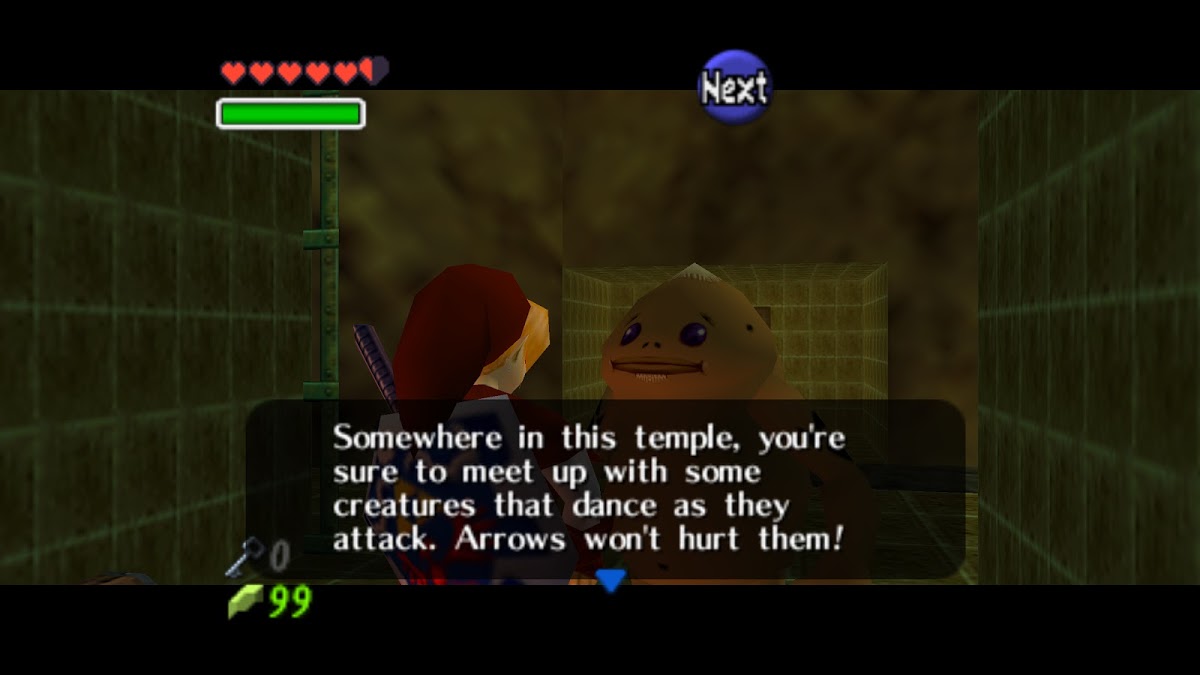 
I can see one more Tipster atop the labyrinth, but the switch is far away from his cage, so I go over, press it, and sure enough it opens the cage. But now I have to get over there and at the second-to-last jump, Link decides that he wants a go down the Overhead Camera Labyrinth again, and gently slides down instead of jumping...


So I gotta go out to the half-circle firewall and up the Labyrinth top and go over to the cell where. 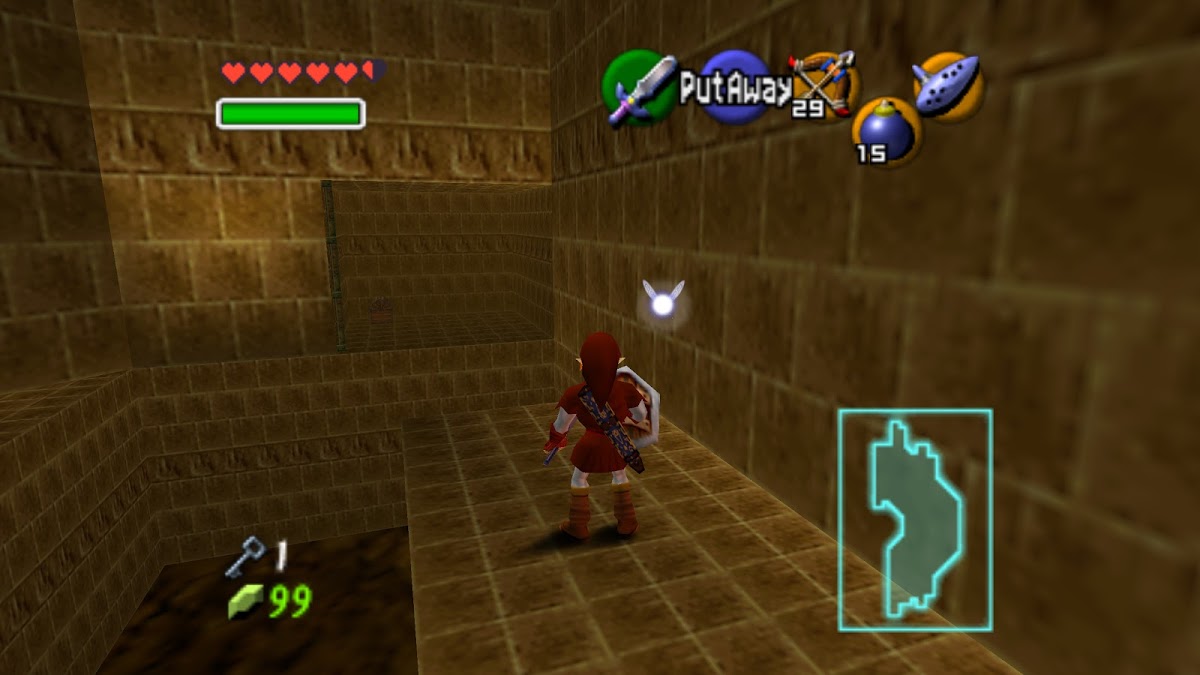 
The tipster's gone... I guess the game counted it as me rescuing him, but because I loaded a new area and back it loaded it with him being rescued... Sooo, I never got the tip.
Let's... hope that's not some all important clue on how to defeat the boss!


Since there's no more for me to do atop the labyrinth, I go back to the half-circle firewall where I spotted a locked door I can enter now and behind that is a thing. 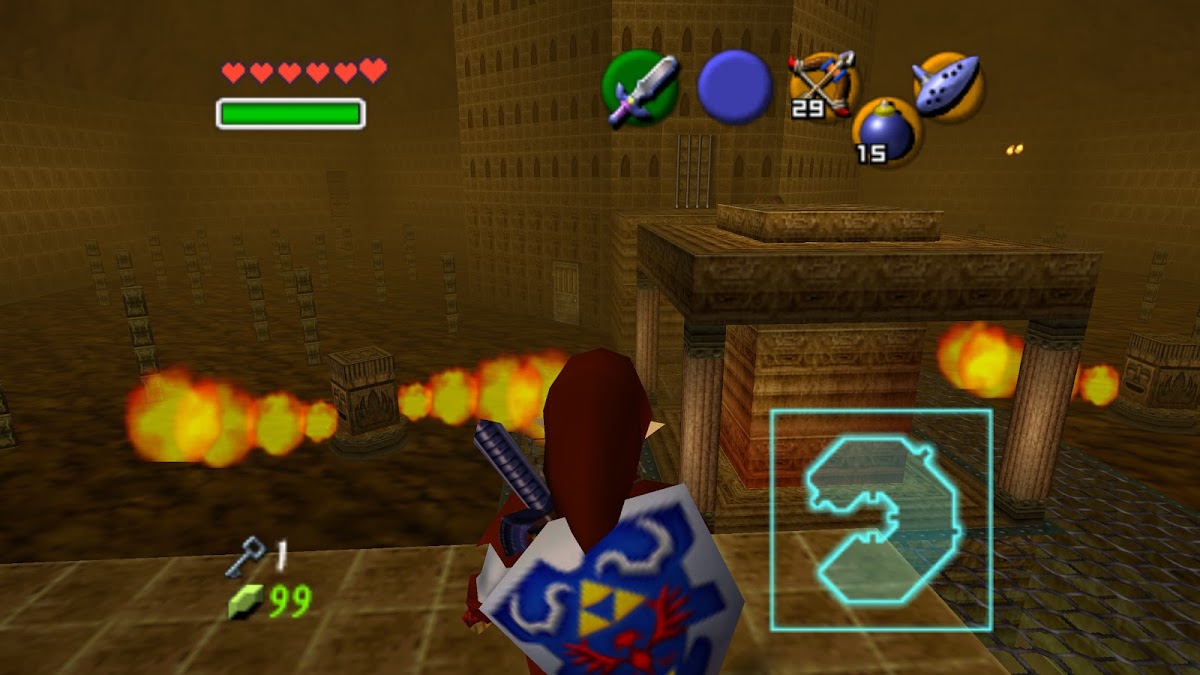 That's a whole thing, this room is.. There's a lot happening there. I... uh.. I might need to take a break.

And that was about an hour of play, so I think that's a good point to stop anyway.


Let's sum up what we learned today, which I think we can all agree, is life advice for any occasion:

Considering the map, I think I'm a good way through this temple, but I've yet to get a bunch of items, like the boss key, the compass or a new utility item (if there is one this time), so we'll see how far I need to go.

Catch you next time!