Last time, we found our way to the Water Temple and got our first brief taste of what was on offer (a lot of boots). So let's see how fun this get when we're really in it.
We found Teenage Ruto and she showed us how to lower the water level, and we lowered it to the lowest level by playing Zelda's Lullaby (which Ruto should really have a problem with, shouldn't she?) and now we begin our exploring.

There are four exits out of the main room at this floor, and the first two are very quickly obvious dead-ends (to which I have to equip the boots to sink into water and take them off to see that it's a dead-end, and then do the opposite to get out!)

Meanwhile, I kept seeing these moon-symbols and not knowing what they were for. 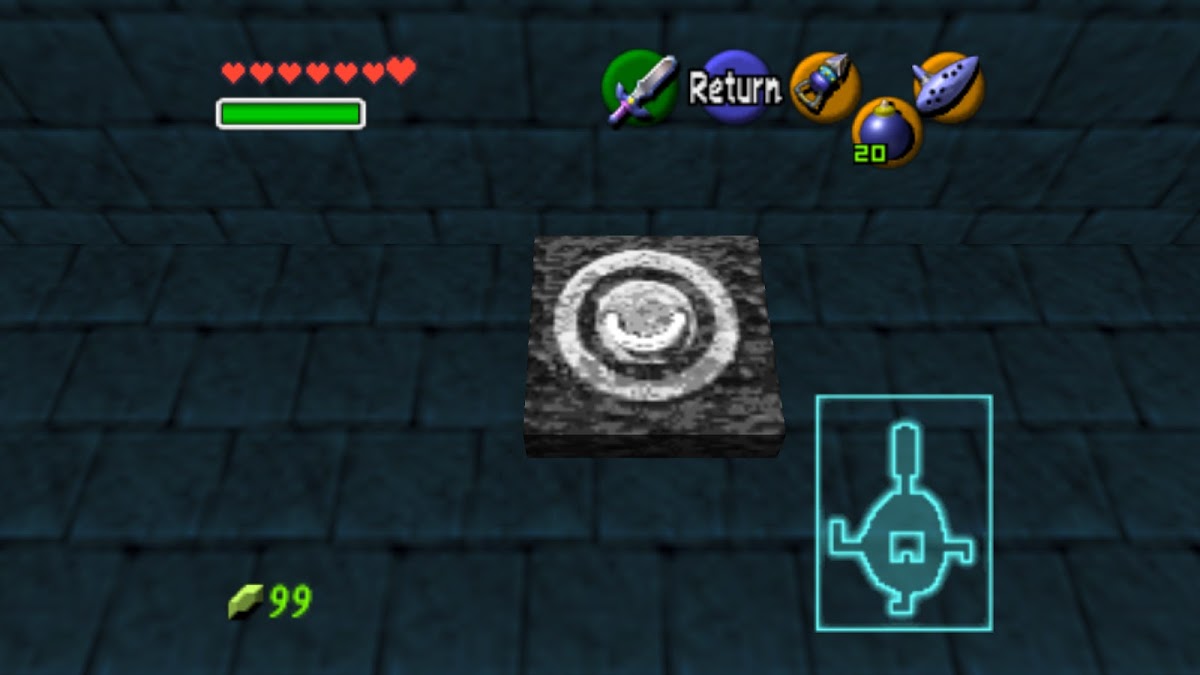 Hey, I thought it looked like a moon, okay? Dunno why I thought that now.

The third path was blocked by a boulder I could just push. And it played the chime when I pushed it to the end. Wow, hard puzzle there. 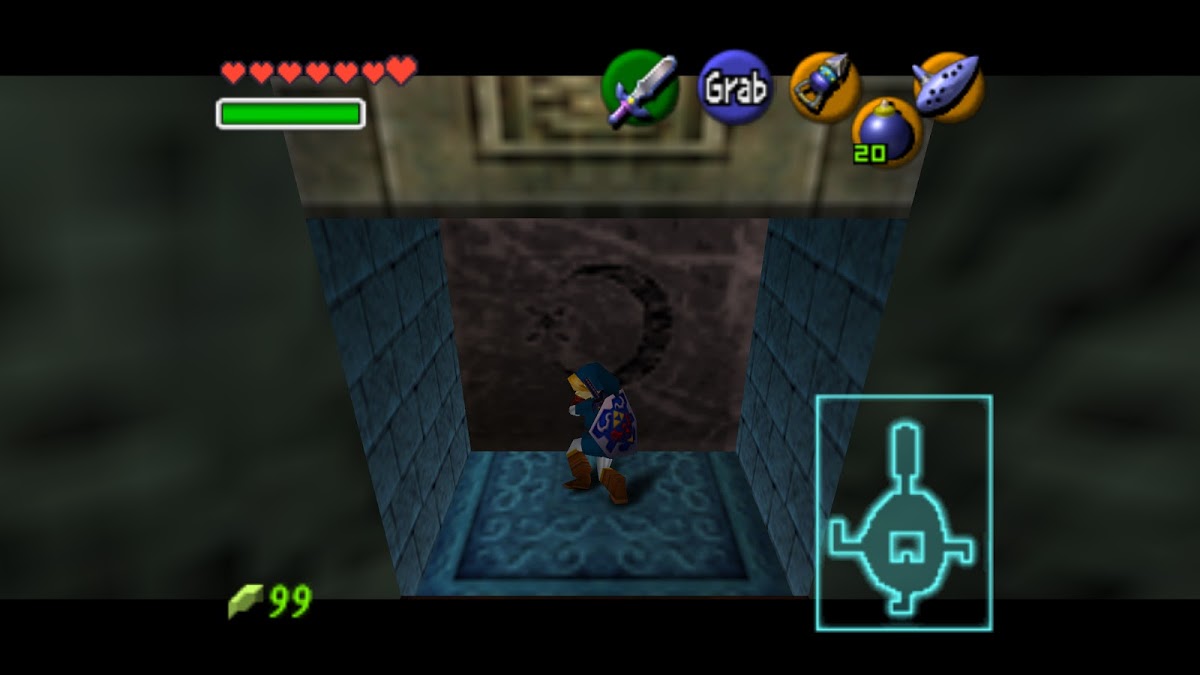 When I got through that, I got to this room with a crystal that made this water-typhoon appear I could use to get to the other side. 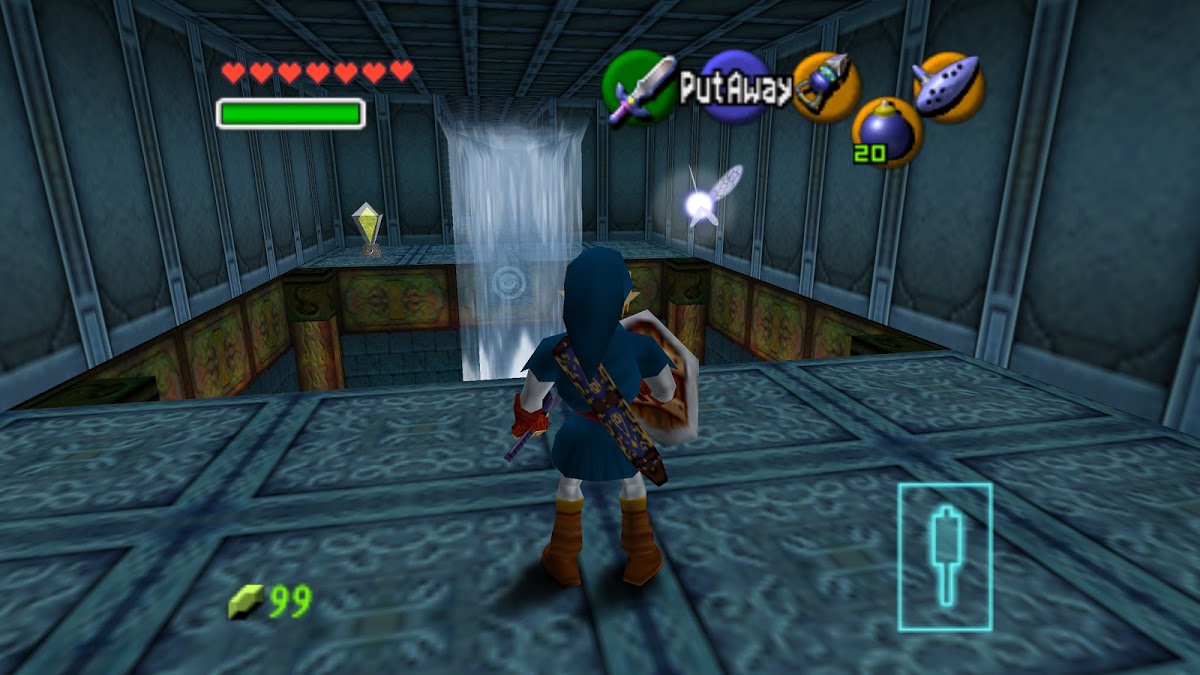 And behind that was a very strange room.
So, there's this pool of water (surprise) that spins around endlessly when you swim in it, and in the water is this dragon statue with another crystal in the end. 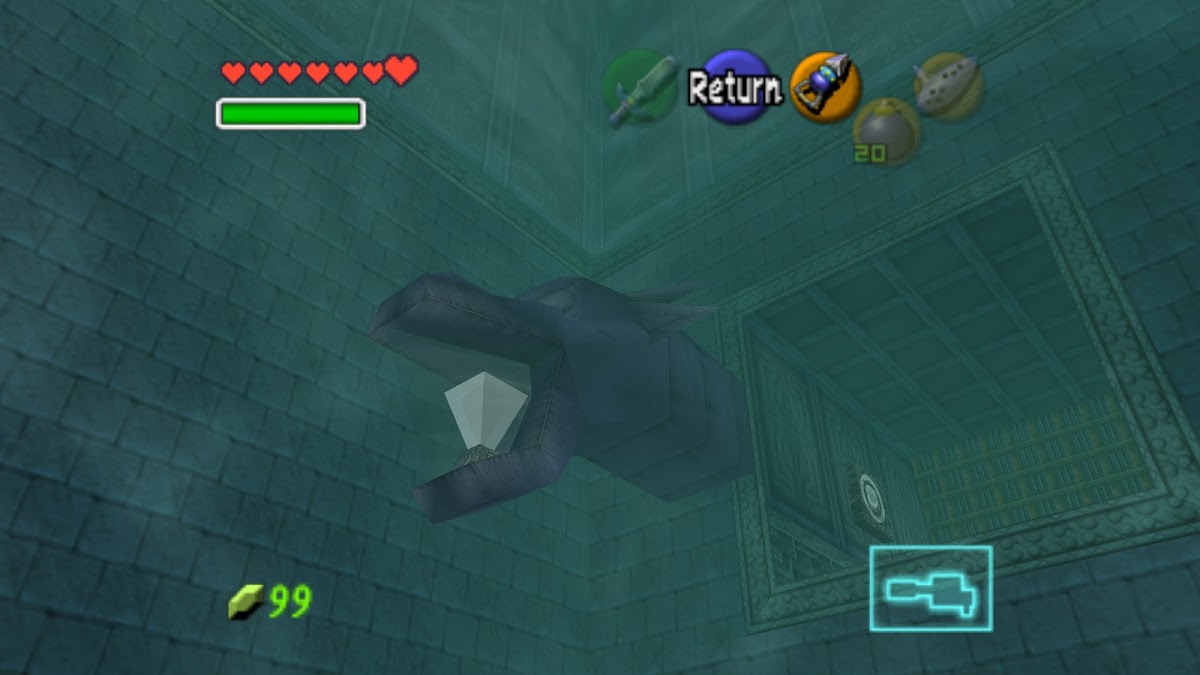 Shooting the crystal opens the gate in the background for a timed period, but you can only shoot it when you're using the boots because then you stand and not swim, but you have to unequip them to get up to the gate, but then the spinning spins you around and you can't hit the gate. But if you do it just right you can get in and behind the gate there's...
Murderous shellfish.

Yeah, this room's weird. And I don't like it. So I went back out again.


And behind the last door?
Another tunnel to a block gate!

So I stumbled around and went back to the room I came down to this floor in and noticed there were two unlit braziers and a lit one in the middle.


So with nothing else I tried the thing I always wanted to do! 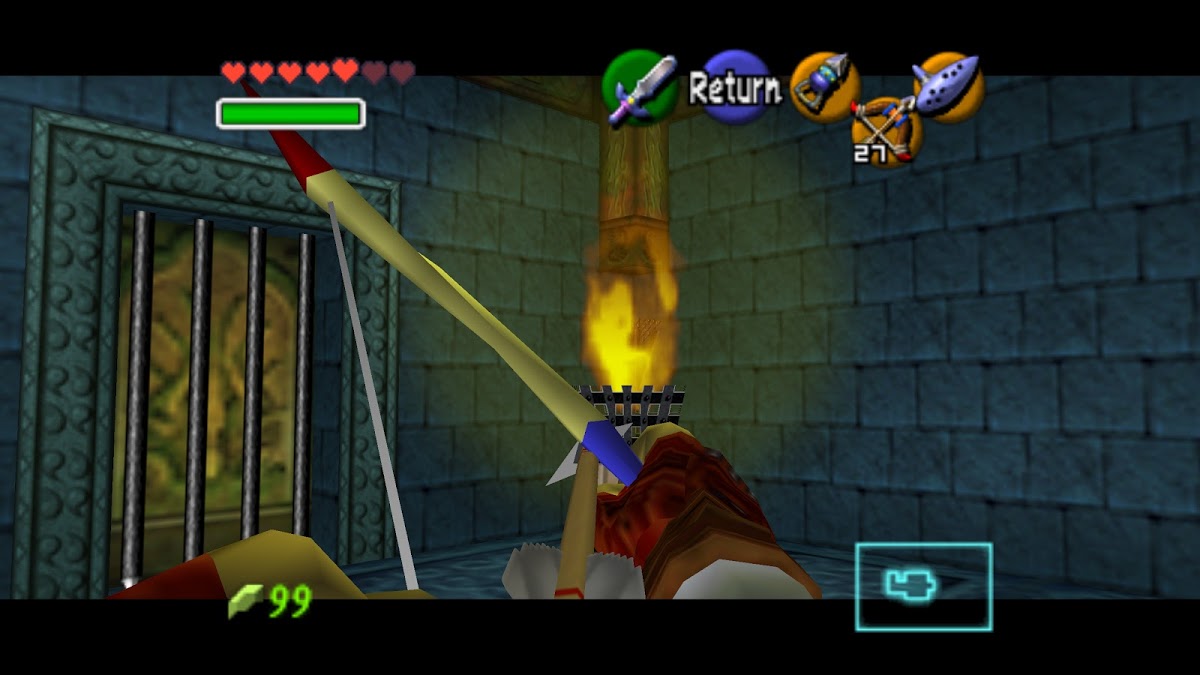 And that leads to a small combat room (with the murderous shellfish!) which, upon defeating them, gives me a... small key.


Hope that's good for something! I went back to the main room and saw this door to the middle-pillar. 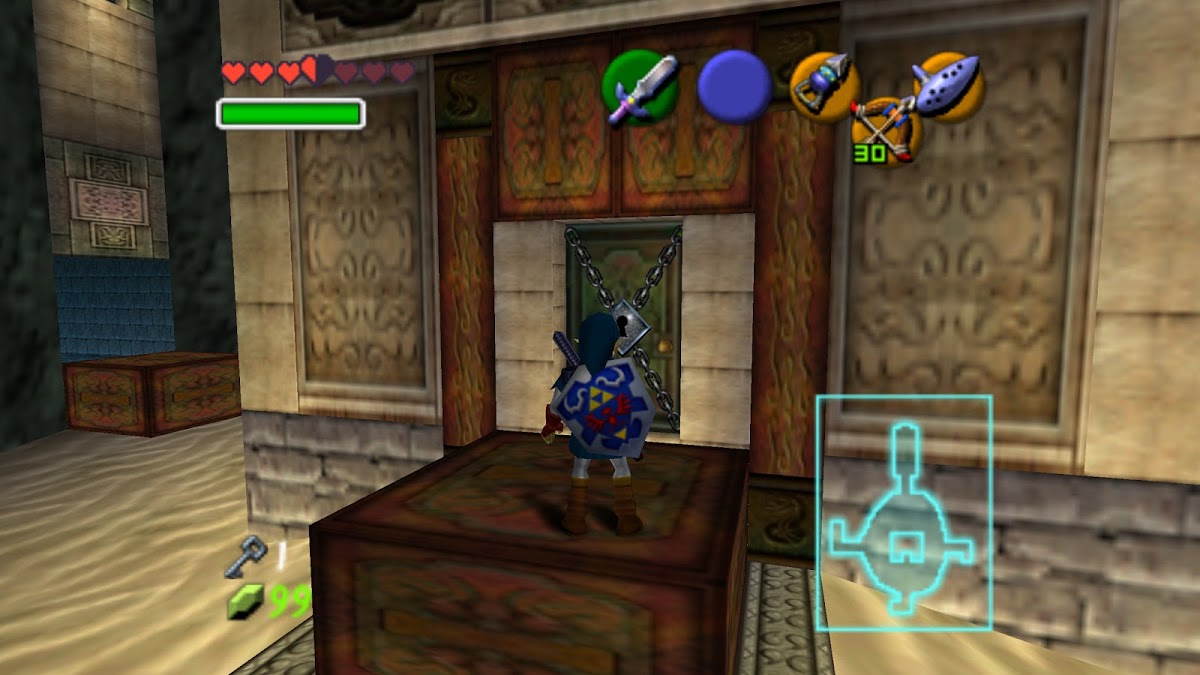 All right, door, I'm placing a lot of faith in you.

I go inside, and I can see a big room that goes all the way up to the top, but I can't get up there now from what I can see.


Turns out! There's a small room above shell-fish danger-room after the the dragon-spinning-water room. I just didn't look up.After I'd stress-fully gone in there, focused on the shellfish and making it there before the timer.
Wonderful.

So back there, and do the thing. But I figured out one more thing: The moons are grapple-points. It's really, like a little hook when you look close at it. And there's one by the gate in the dragon-room so you can just shoot the crystal in the dragon's mouth, then shoot the grapple-point to get up there without ever taking the boots off!


That room also just gives me a key.

Back to the guide.


Turns out! x2
I can go into the pillar room in the middle and
Look up.
Again. 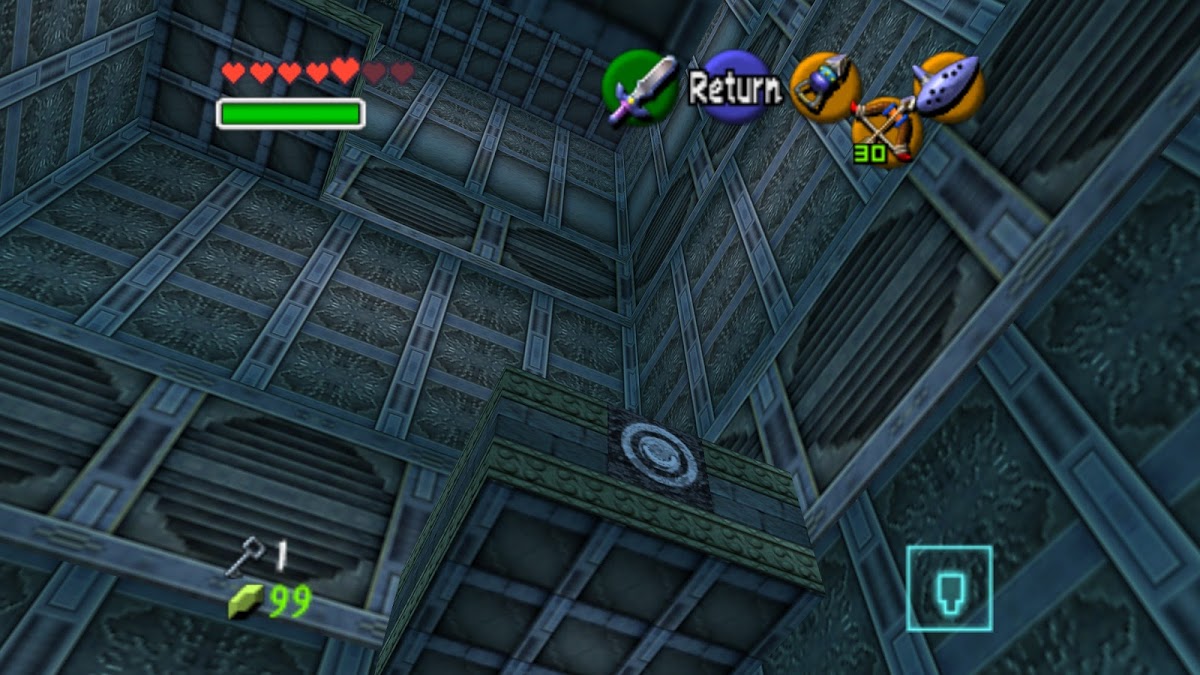 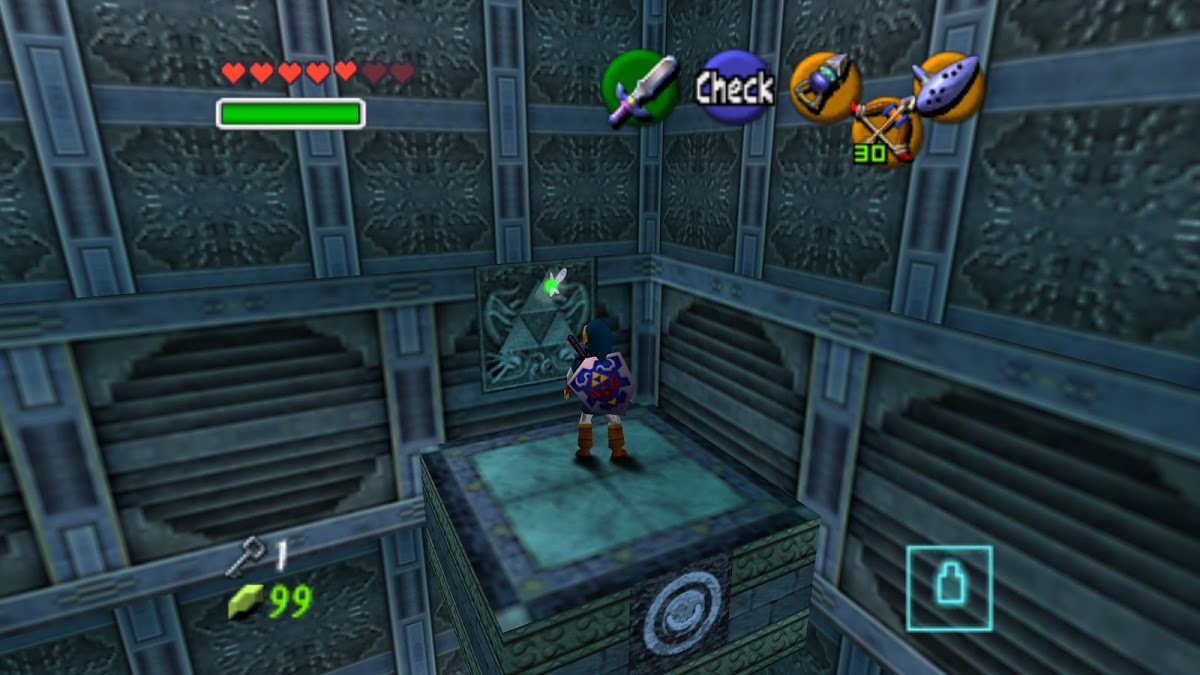 Triforce symbol! Now I can raise the water level!
One level, it turns out. So now it's in the middle. New floor to explore!
First room I go into, there's another crystal and a typhoon elevator that shoots me up. 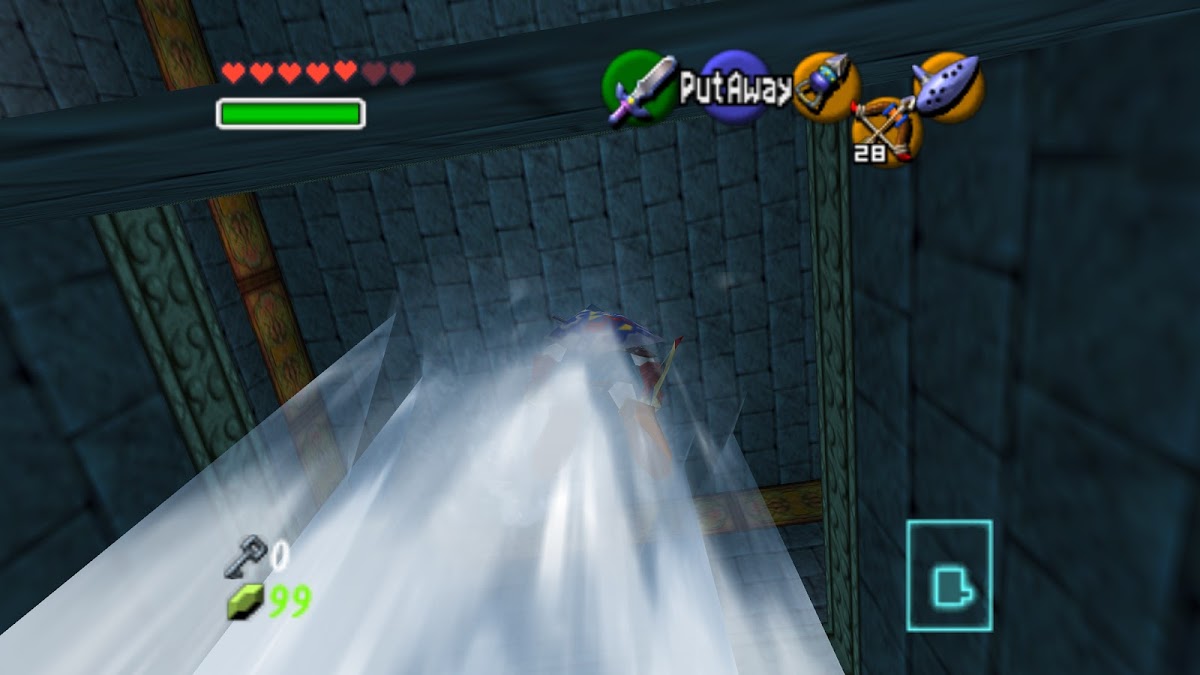 Elevator! Not as good as the one in the last dungeon.

And this path takes me up to the triforce symbol for the upper level.
That seemed a little fast. let's explore second level first.

Back down again and see the other rooms:

Remember this room? (It was in the last episode) Now I can actually shoot the crystal and get the chest!
In there I get the Compass.

That's compass and map down. I think that's good enough for today.

Sorry if this is a bit shorter, but this temple is taking a while to get through! And this weekend was really busy (I actually played this on thursday to compensate) so this was really all I could do.
BUT here's my review of the Water Temple so far:


1. The boot swapping is annoying, because you have to do it all the time, but it's actually not the worst part. It's just a part that drags down the pace, and makes you less likely to want to go somewhere because it's a hassle

2. It's confusing. The three levels on top of each other are all intermingled and you don't have a clear sense of where you're supposed to be. Especially now that I got all three levels available.

3. Every time you go back to the main room, even if it's just going to a corridor and immediately back, the enemies in the room respawn.So I have to kill them. again.

4. Several times, (as seen above) the solution to me being stuck was "look up". The camera controls in this game don't lend themselves to looking up easily. Verticality is neat, but too much is also annoying.

5. Sometimes, the right choice is NOT to take off the boots when you think you do, because you have to grapple up instead of swim up, because the water doesn't rise up far enough (and you can't grapple when swimming, only when walking on the water-bottom. And it's unclear that this is the case until AFTEr you've taken the boots off.

So that's all great and fun.

See you next time!