Last time, we went deep in the Water Temple and found out what a terrible mess this ol' place is, so let's see how fast we can get outta it before it all crumbles under my feet. My thick, iron feet.
We found out how to raise the water level to all three states, but now I got stuck not knowing what to do with that. So, letting the water stay at medium level, I found nothing to really do with that, so let's see if we can do anything with highest water level? 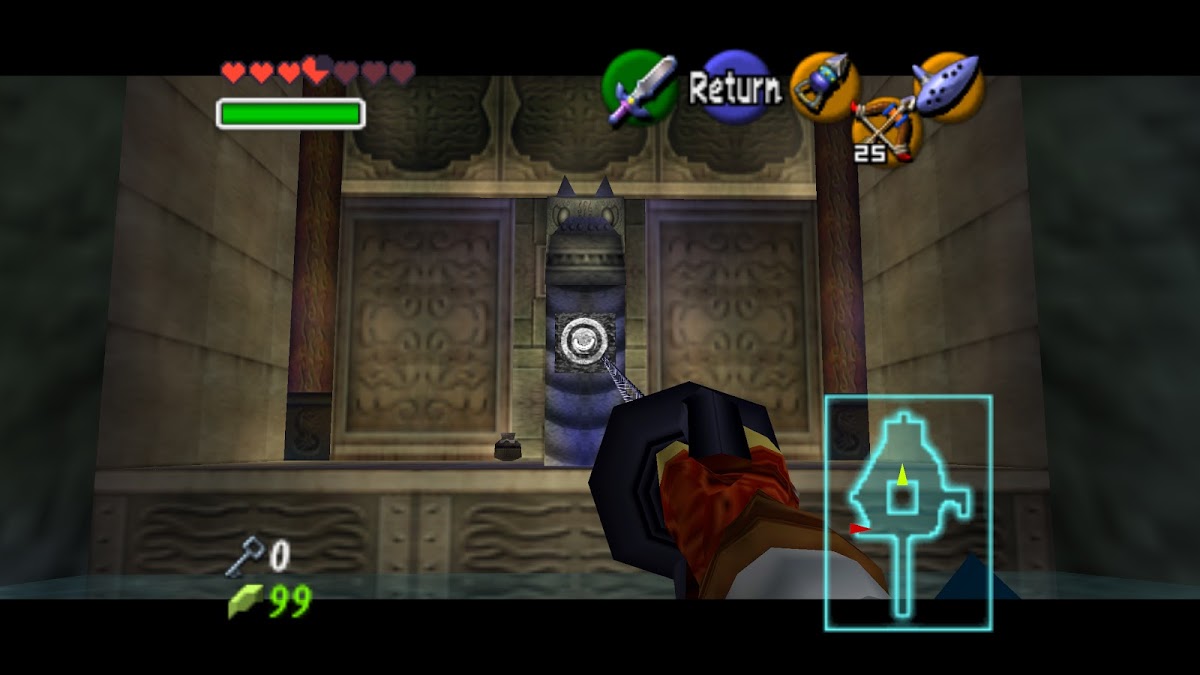 There's jack shit up there too.
Soo, I'm stuck. And I dislike this place. That's right. I don't hate it. It's just a dislike. Just an active want to be out of here.

So I looked it up. Okay? This time we're guiding our way through this thing. I'm tired.
Turns out!

There are two keys I need to get on the middle water level. But they are both hidden. Like, the guide acknowledges that most people miss these. So I don't feel too bad. Just look at this! 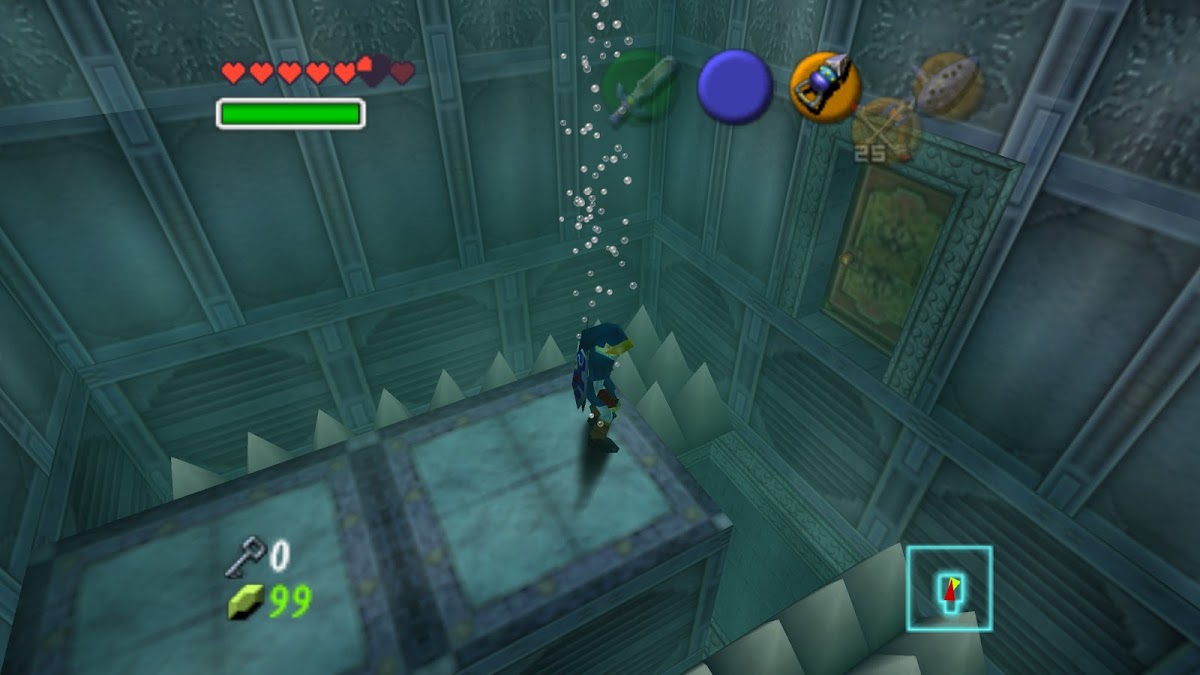 That's a hole. Before, there was a platform. But when I raised the water level, it lifted up to float on the surface, revealing the hole underneath. But this is shown so briefly that you can completely miss it since you're above all of this. Soo, let's jump down the hole. With our iron stompies.
There's a crystal, we shoot it to have enemies fall down on top of us, defeat them and crawl up to get a small key.

The other small key is in the room we met Ruto, and we can float up as well, but since the water level is medium and not high we only float halfway, where there's a hole in a wall we can blow open to get the other key. 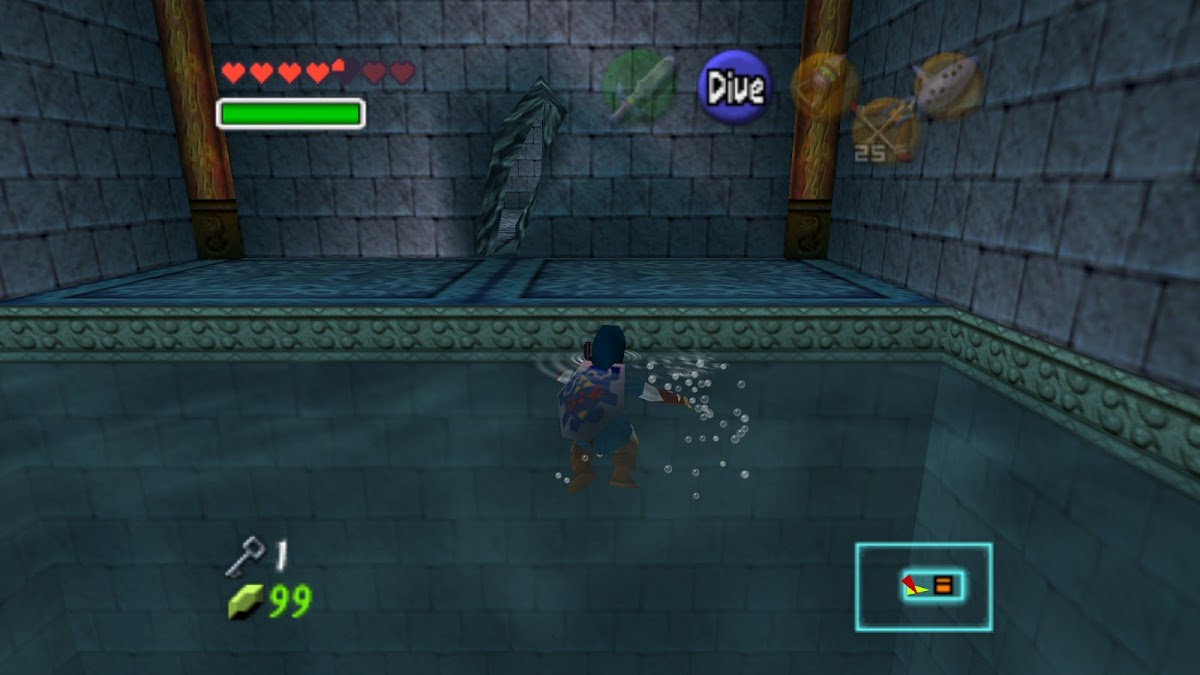 So, that was well hidden, wasn't it?

NOW, we can raise the water level again and actually use those keys.
Because sure enough, there was a door up there that needed a key. 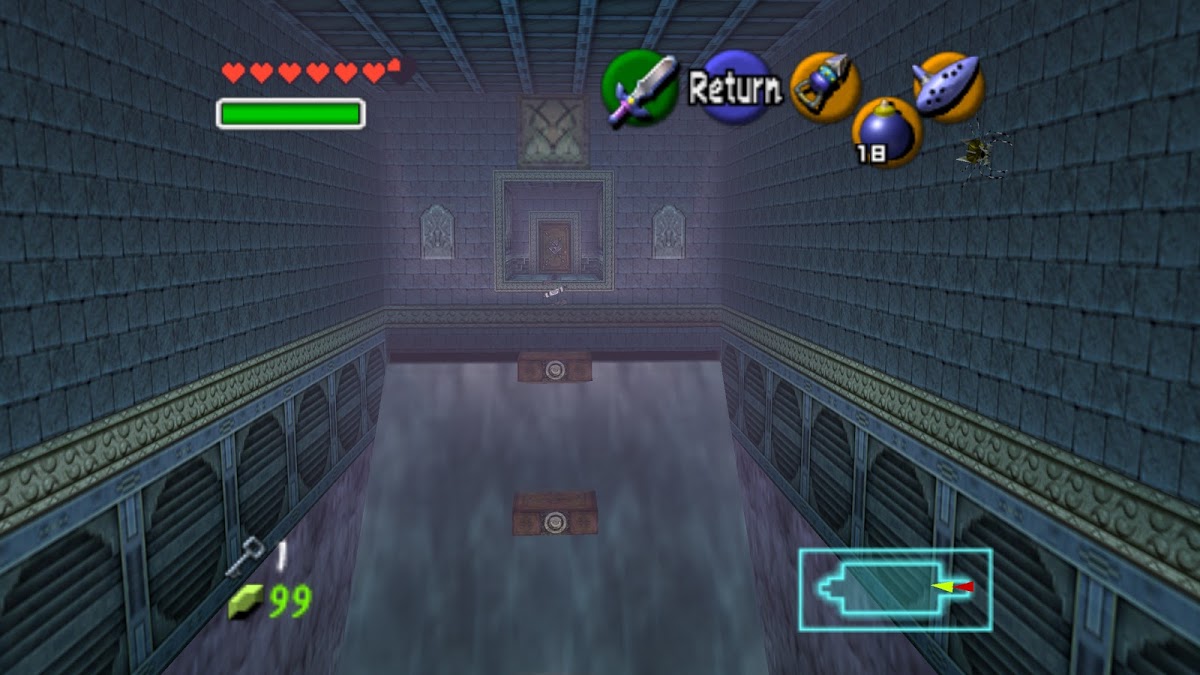 The next room is this huge waterfall with a bunch of platforms down. And it looks kind of neat. Doing it, though, is less interesting. There are all the moons (look, I'm stuck calling them moons now. They're moons) you have to hookshot up as the platforms slowly glide down the water, so you have to constantly keep up the pace to get up to the top.
All right, it ain't too bad. It's decent. 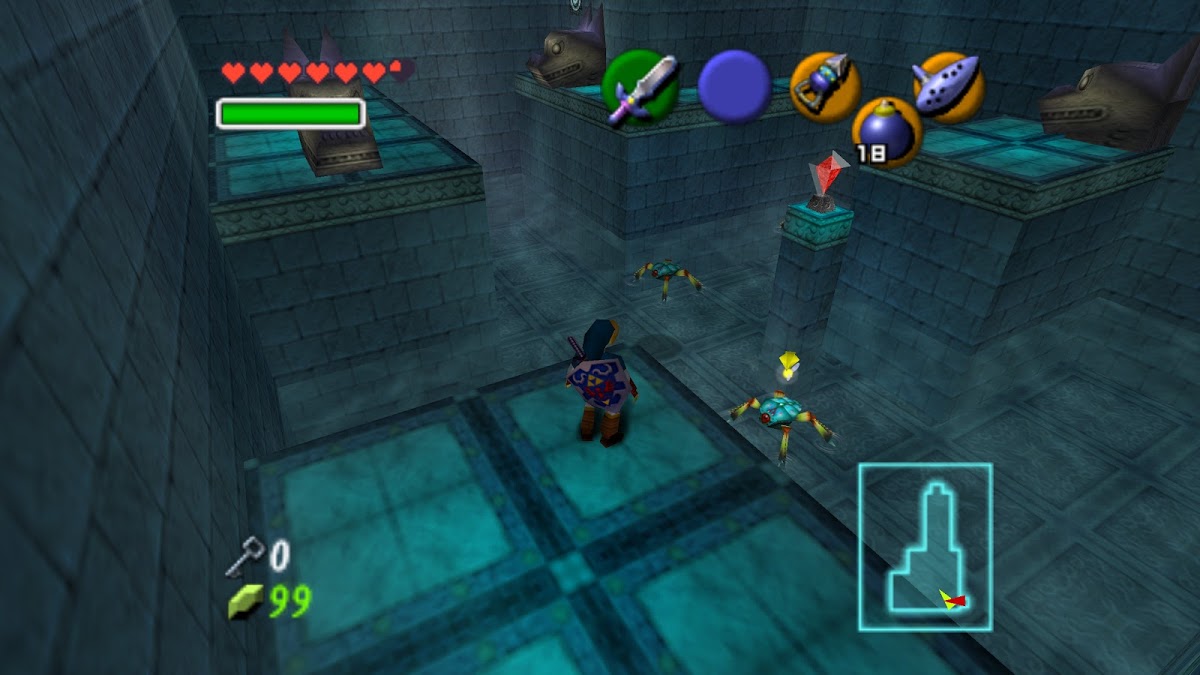 One cool thing I'll also give this game is that it's really good at making rooms that look unique. Every time I go into one of these I'm like, "woah, what's going on here?" before I can begin processing it. That's pretty good.

This one is a heighten/lower puzzle where I have to shoot the crystal to heighten or lower the dragon heads to reveal a moon-point to grapple to, to move around, and finally use one of the dragons as an elevator 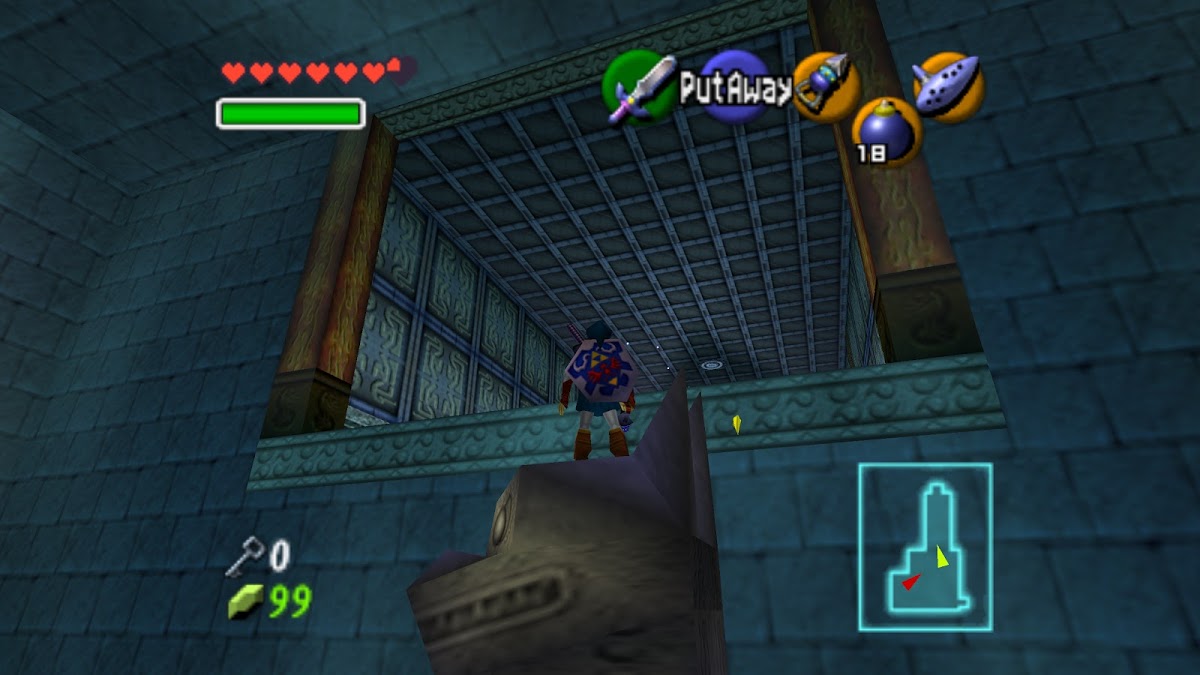 Up there, there are two more of the jumpy-spider thingies and another of the worst enemy in existence (the slimy goop). 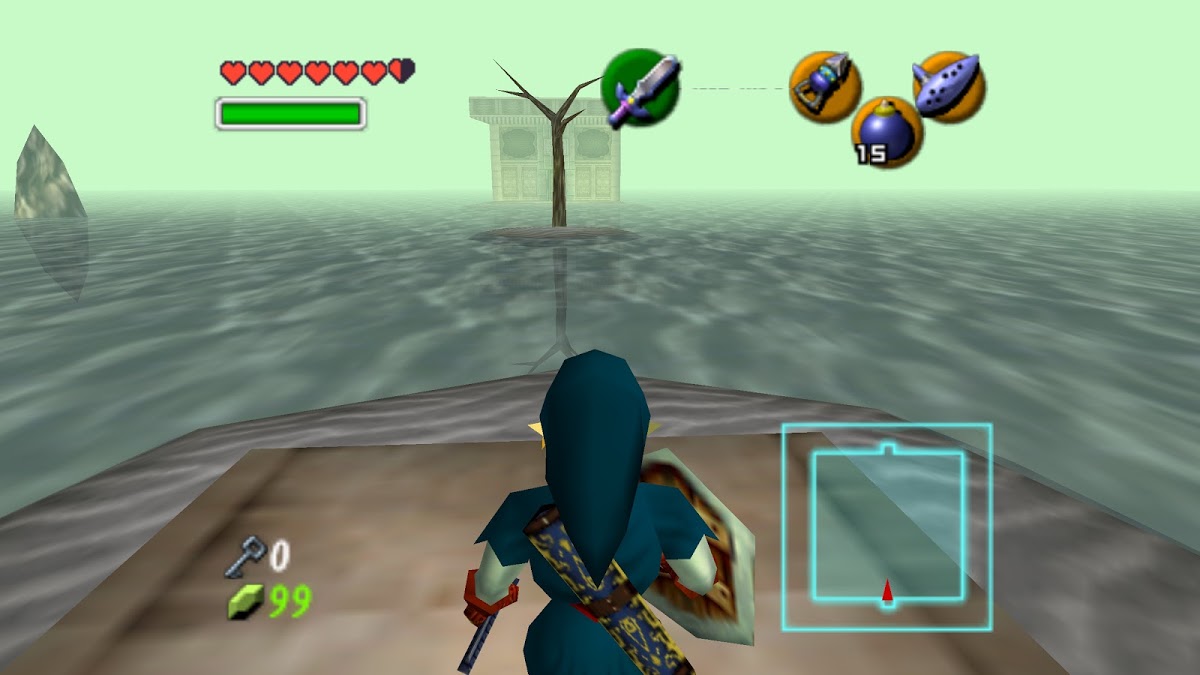 To quote myself "Woah, what's going on here?"

This room is just damn cool. 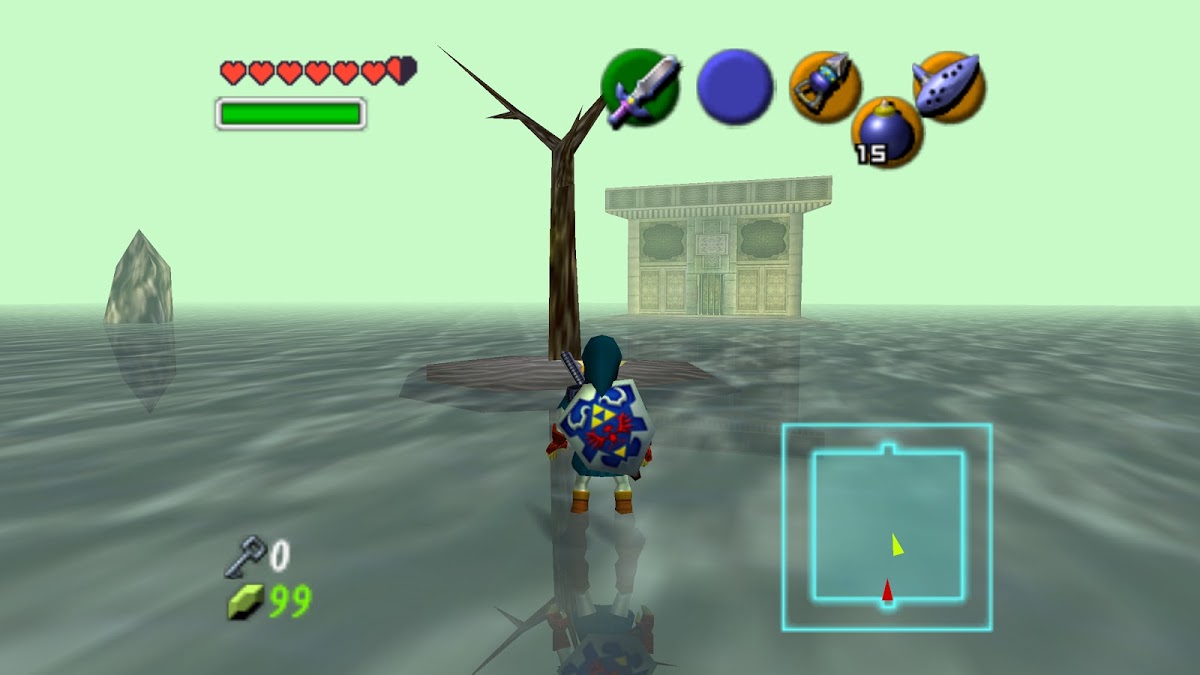 I walk a bit around, not sure what it's for though, as I see no doors to get through (the one at the end is locked) and little else, until I turn around and face the tree again. 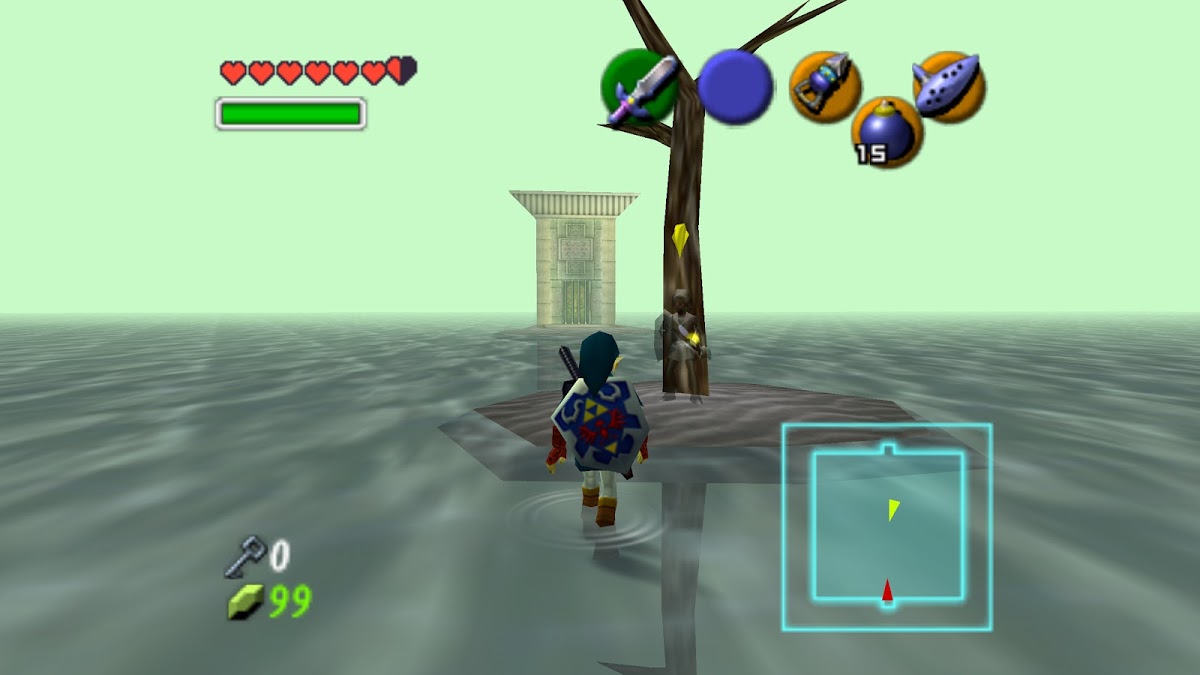 As soon as I target him, though, combat music kicks in and he jumps at me! 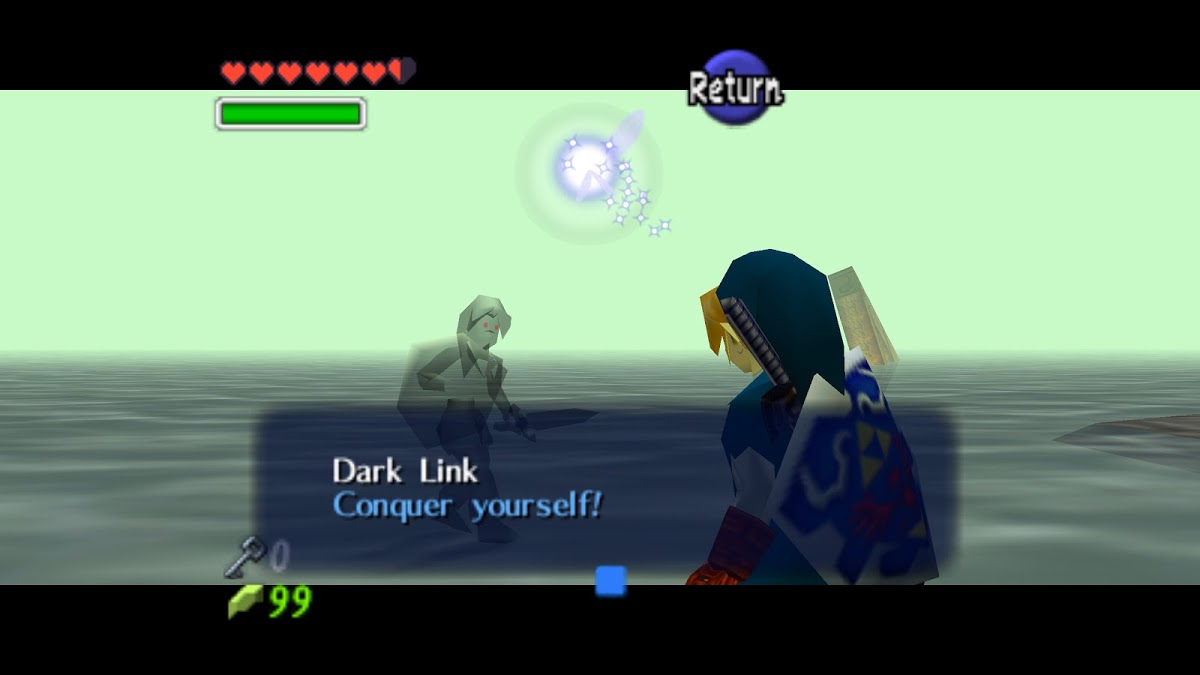 Time for some psychological introspection done through a metaphysical representation of a combat scenario that will change how Link understands himself.

Right? This is what this'll be. After this, Link will have learned an important lesson about himself. And maybe abandon all of this behind. Just settle down on a farm, let Ganon win. Or just let the competent people take charge. 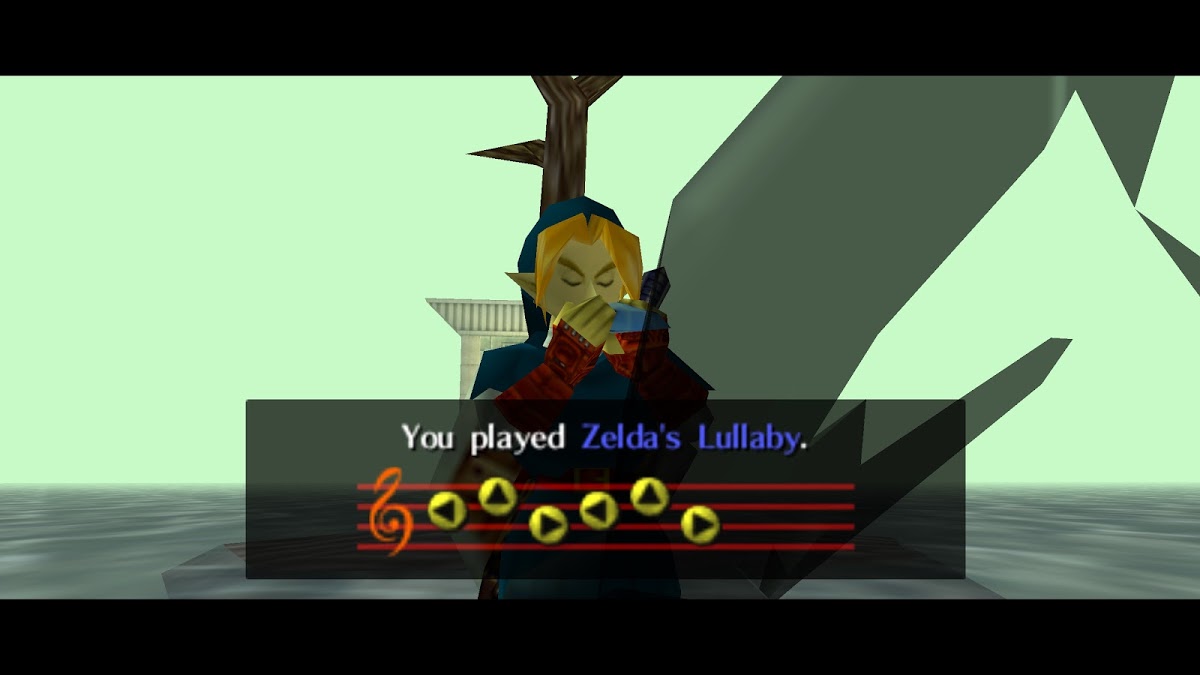 Because this guy is indeed a mirror fight in that he tries to mirror what I do. So if I slash, he slashes, and our swords clash. Except sometimes, where he dodges backwards. Or the other times, where I straight slash and he jumps on top of my sword and hits me like a douchebag. I can't do that move!

I did get one hit in, yet I never learned how I did that before 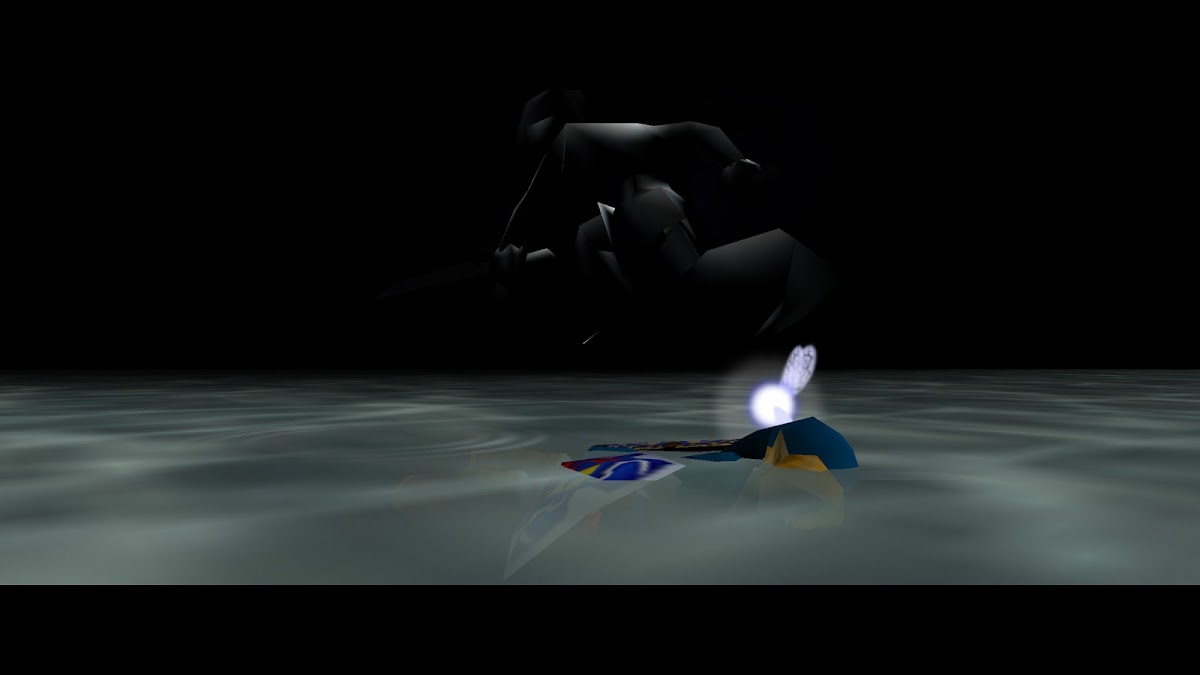 And respawned back at the beginning of the dungeon so I had to go through the entire waterfall and dragon-puzzle room again. Which, while they're neat, aren't fast. And I got there with not full health. 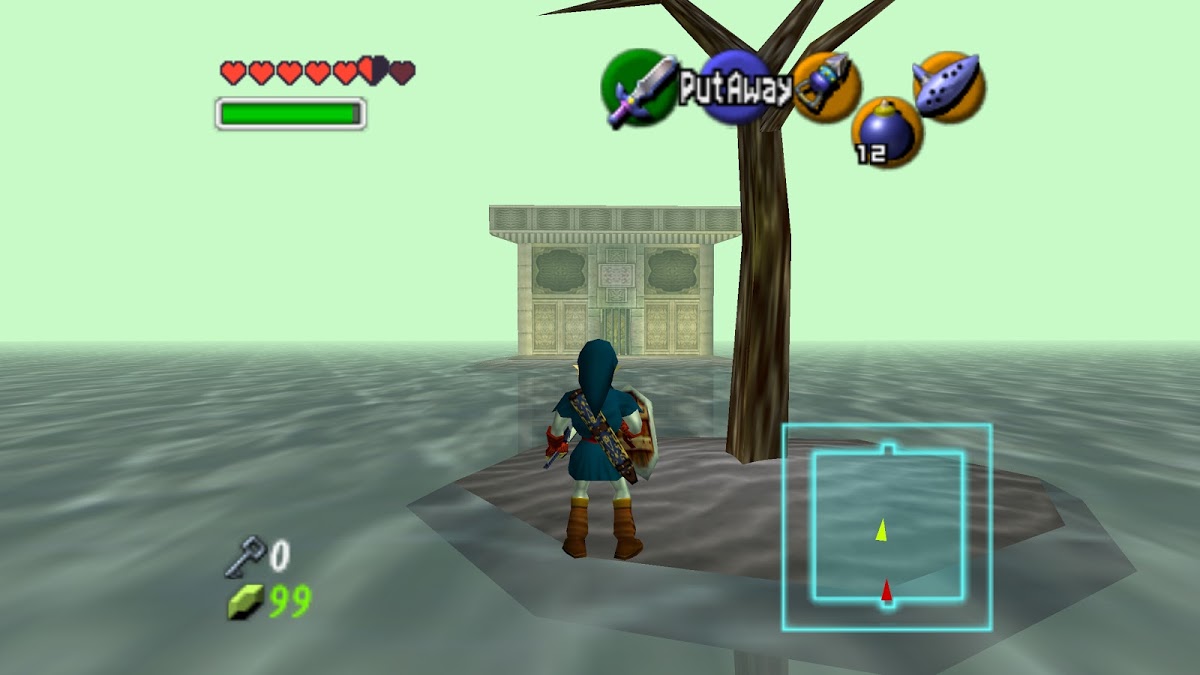 Cool detail: Dark Link doesn't show on this side of tree. You have to walk past the tree and look behind.

I died two more times. I got some more hits in and eventually learned some things. And also, the guide has more text about this fight than any other element I've seen before.

It's a pretty good fight! It's challenging. I didn't die three times because it's bad, but because it's pretty hard. However, it is a bit unclear how you actually hit him. It just sort of happens when you catch him at the right timing. But it doesn't feel like I outsmarted him, but just that I happened to hit a hole. But still, it's a fairly good fight.

Buut, I did have to do the damn boss-run four times, which I was less a fan of. And then I remembered I could just save state because I have the powers of emulation, and then, after I'd done that, I beat the fight. Of course.

And then the room turned into a normal temple room! 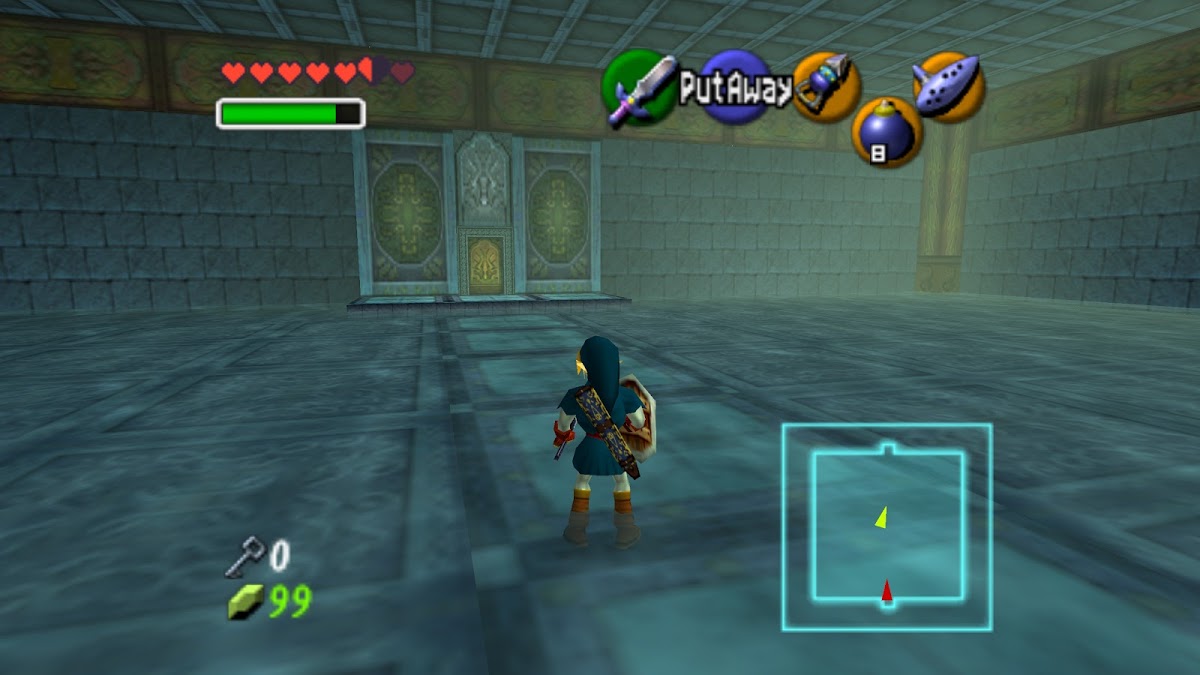 That's another neat trick. Damn, this temple's really showing its best side today. 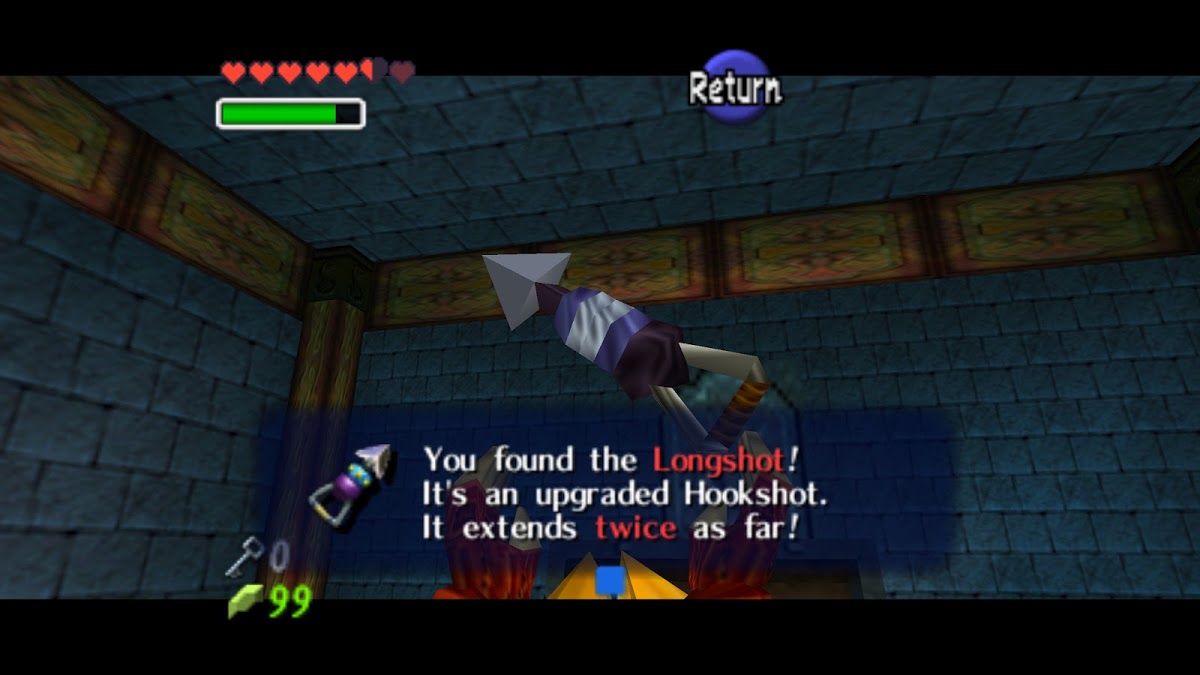 Longshot? Ok, alright, that explains why there were moons I couldn't hit. And this is the first time it's just given me a better item? Outside, like, giving me a bow instead of a slingshot (but I can't use the slingshot anymore).

And then I had to play The Song of Time (!) to get out of that room before I saw what the next challenge was Na'vi already knew what was up: 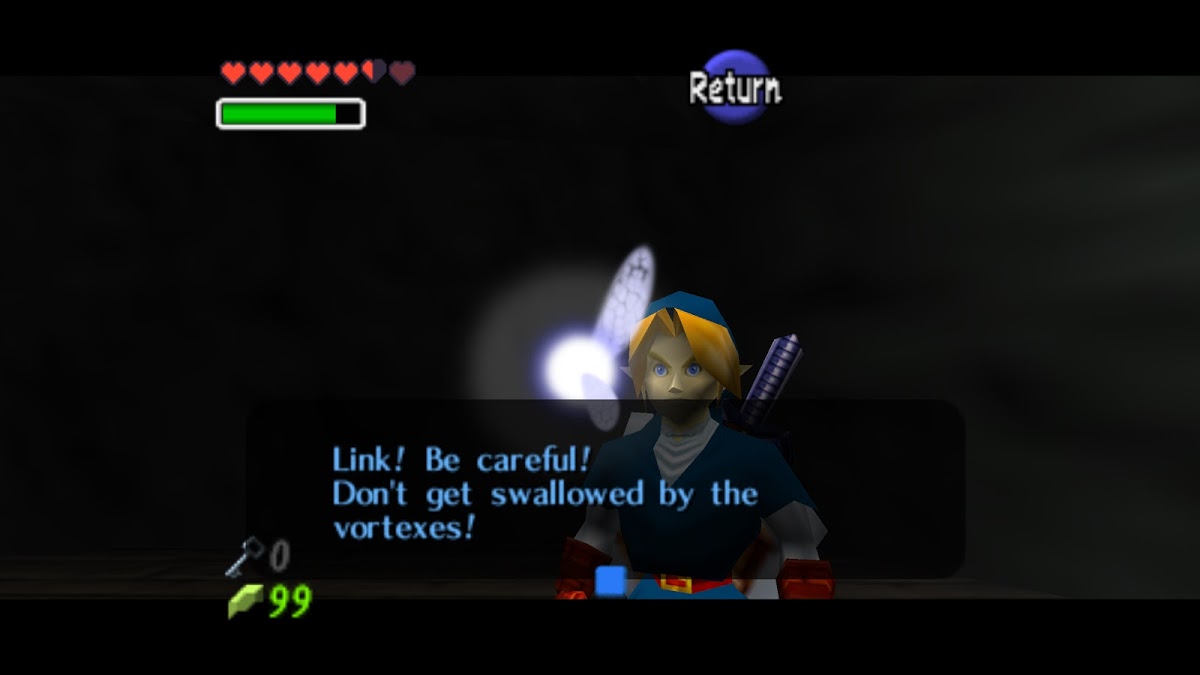 Turns out, there's a river-swimming section with a strong current and vortexes! 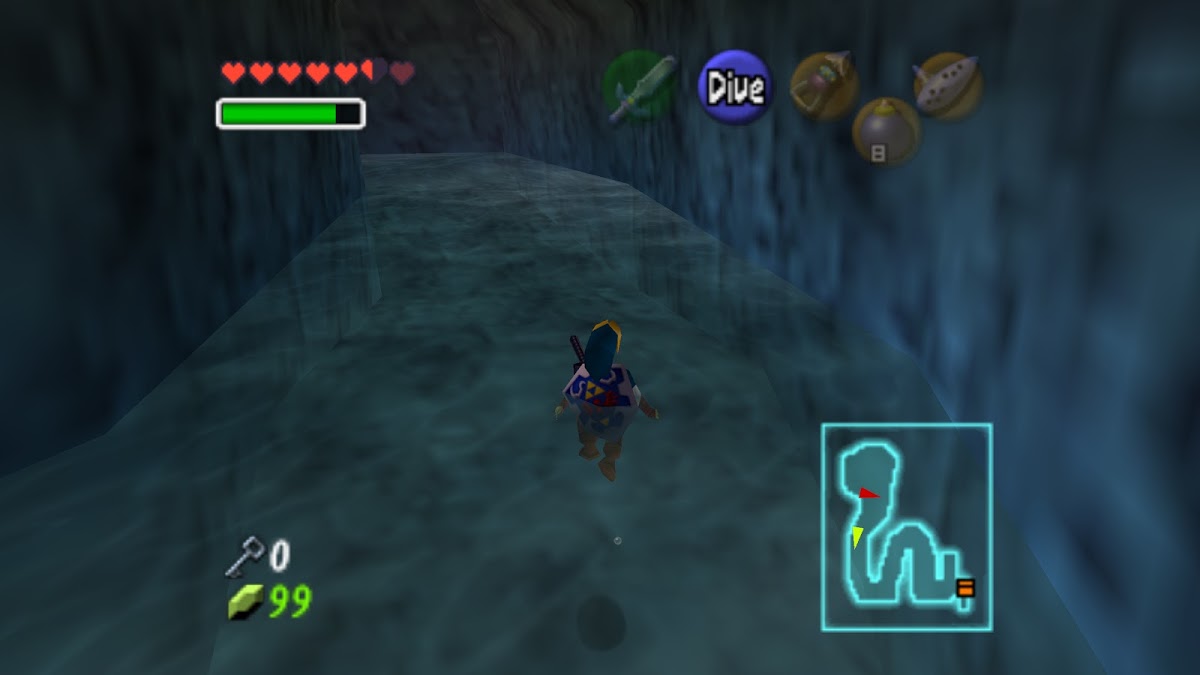 And I managed to take a screenshot with no vortexes. But you can see the minimap, it's a long, windy river.


And eventually, after getting sucked down twice, we land back... on top of the spinning-dragon-head-room! Nice, we're back! All right time to test out where we can use this upgraded grappling hook!

Sorry, that fight took a long time for me. We should be getting outta this place in the next one, I think though! If I can defeat the boss that is. But that's gotta be easy after all this, right?

...Who am I kidding. Tune in (tune in? What are we doing here?) to read about my sufferings in a week.