Last time, we finished that darn Water Temple and got out into the open with another Sage in our Temple (...uhm, that's an expression), and now it's time to look for broader horizons. ...Not that it'll take much since that was a pretty narrow horizon down there. But Sheik didn't say much, instead a stone told us to go east.


So I headed west, squarely ignorant that I was supposed to head... east. (I have since looked at the screenshot of the plaque and it very much says east) 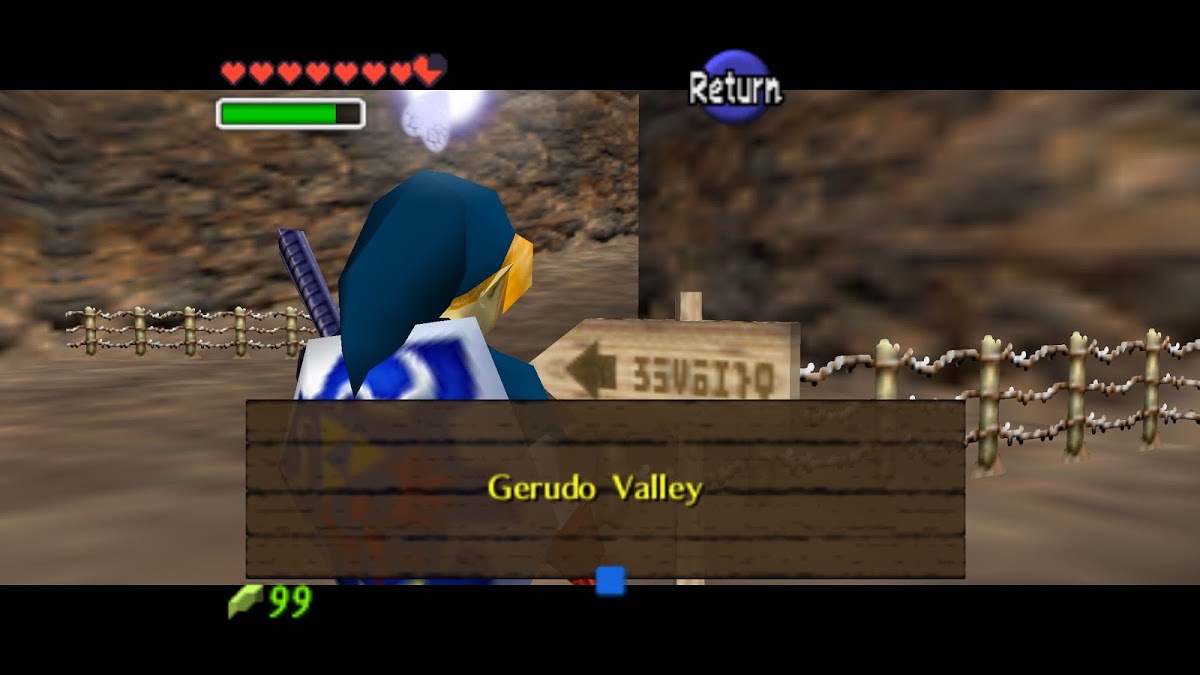 Because there was one more thing I knew about Ocarina of Time before I played it: I had heard some songs, sure, but I knew that the Gerudo Valley theme...
...is a JAM!

So I was so excited when I went in there and this beat kicked right in. No fuss, just jammin'. (Just put that on while reading the rest of this).

The first thing in Gerudo Valley is a destroyed bridge, over a deep canyon that has a sign next to it that says "No Diving Allowed -- It won't do you any good!" which is an alright sign.
Fortunately I can skill-check over the bridge with my Longshot and find a lone man outside a tent. 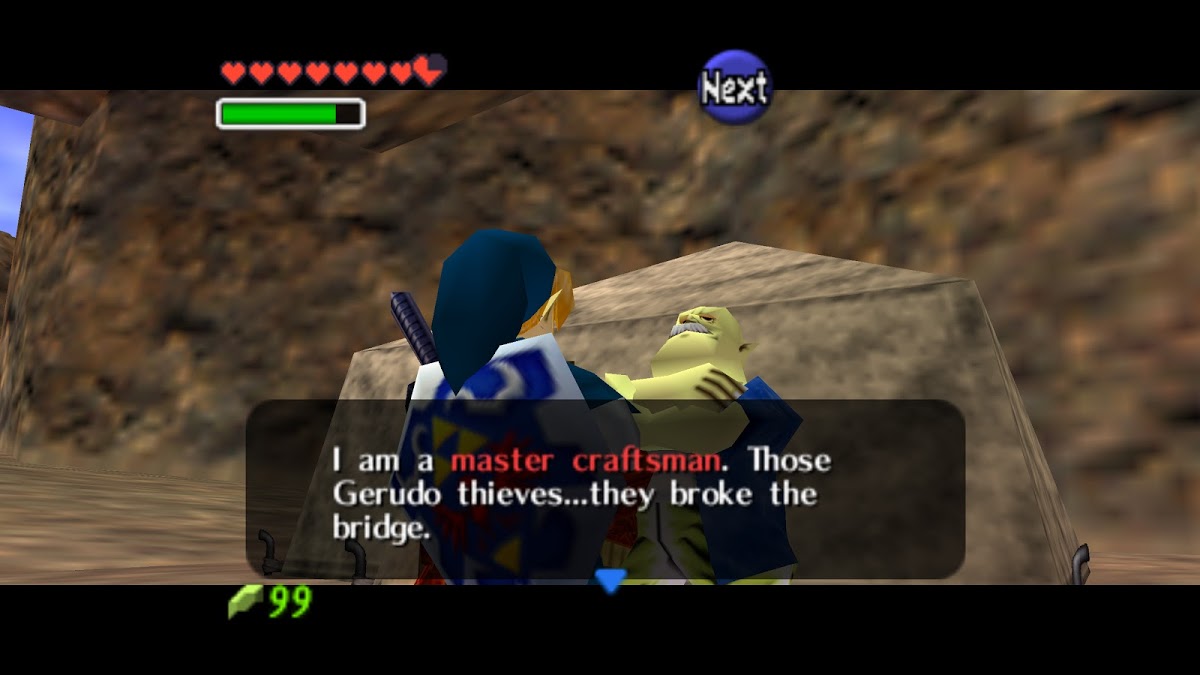 Now, that's just prejudiced. Why would they break the bridge just because they're Thieves? Actually, that seems like kinda a bad strategy if you're a thief. 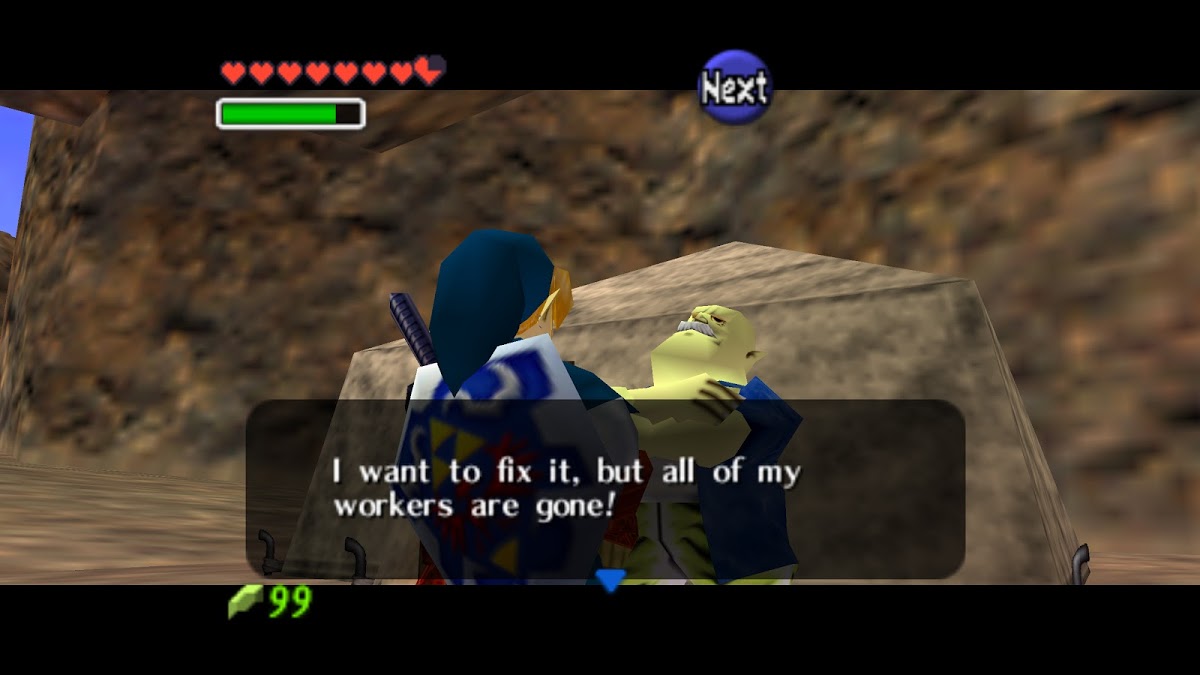 Oh, I see. This is a conspiracy. YOU broke the bridge. And now you're blaming the thieves. 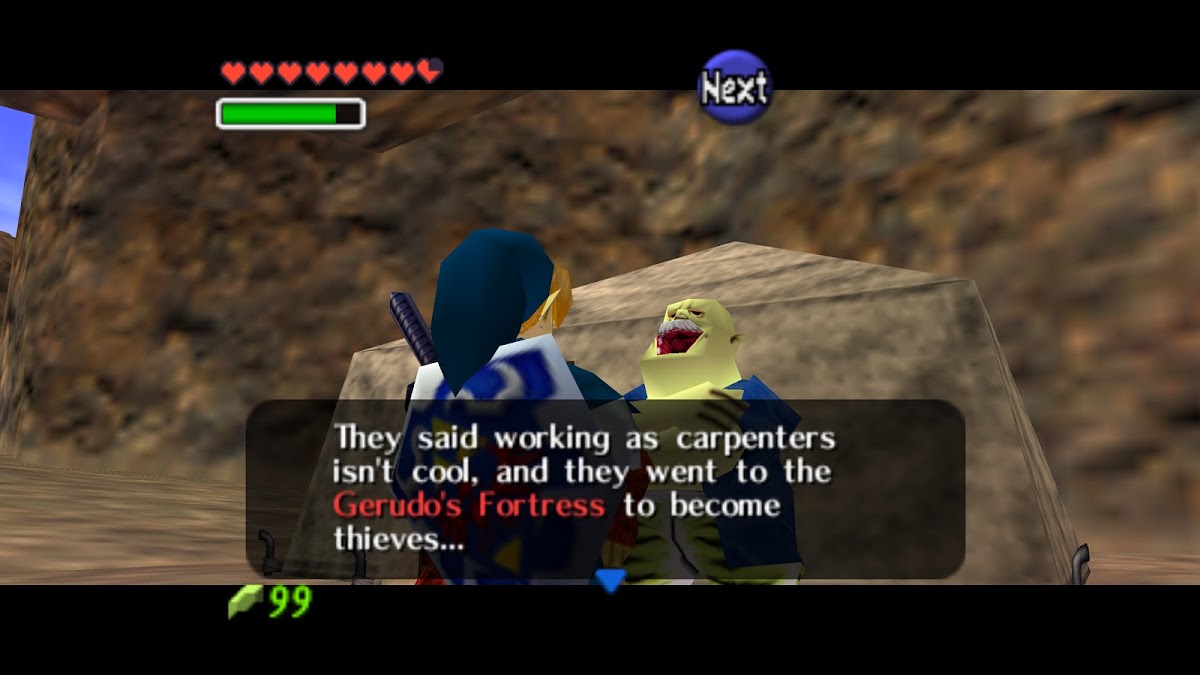 You're just doing this to get free labour! I'm seeing right through you, man!


Inside the tent is a "wandering running man" (which is a job) who's in search of competitors who have a "true killer instinct".
So sign me right up! The truest of killer instincts! (insert bad image of Link here)
But, unfortunately he can't do it because the bridge is down. Soo, I guess I gotta help repair the bridge if I want to prove my Killer Instinct.


Anyways, the guy warned me about the Gerudo Thieves and their Fortress. Time to check out how bad this whole thing really is. 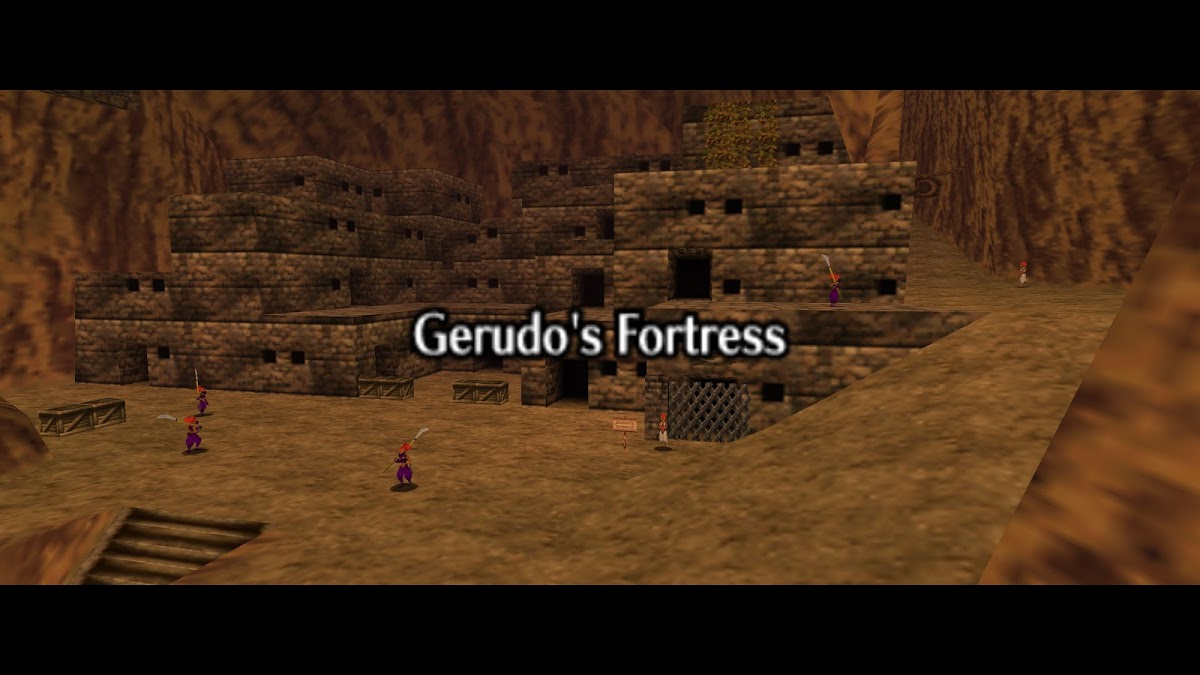 Oh, that's a fortress all right. And you can see a bunch of the guards walking around. And they don't look like enemies, at least. Sooo, let's see if I can talk to them. 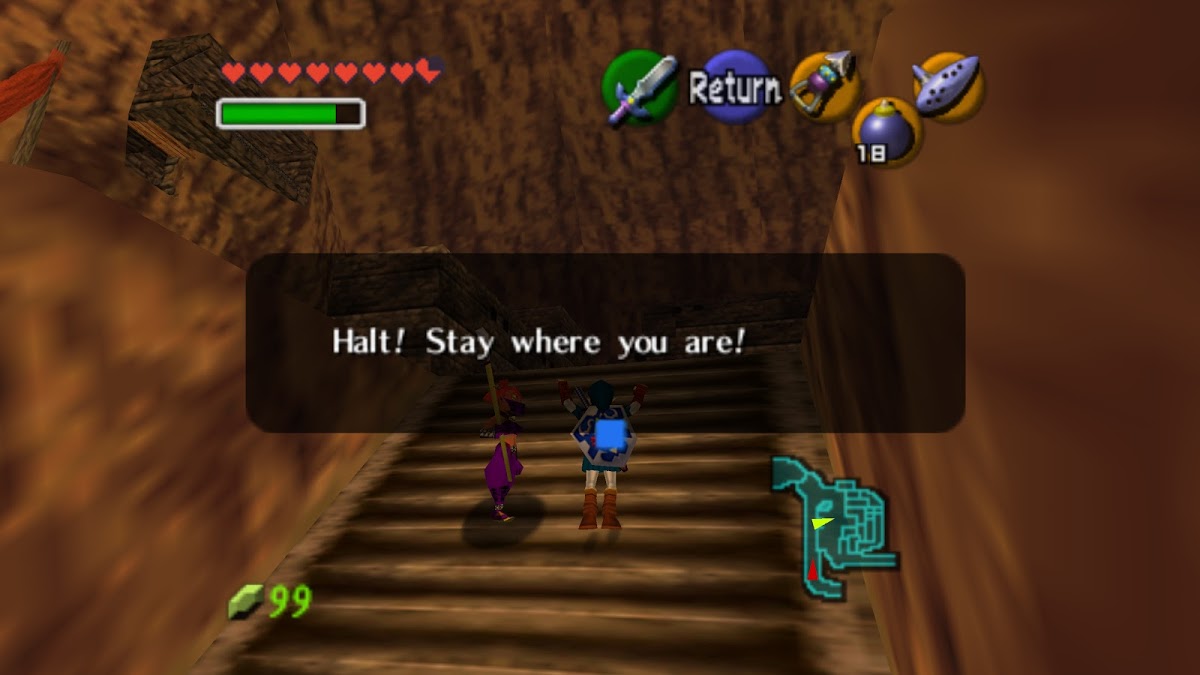 Well, let's say they talked to me. But that's not so different than the rest of this game. However, they don't say that much more, instead the game fades to black and... 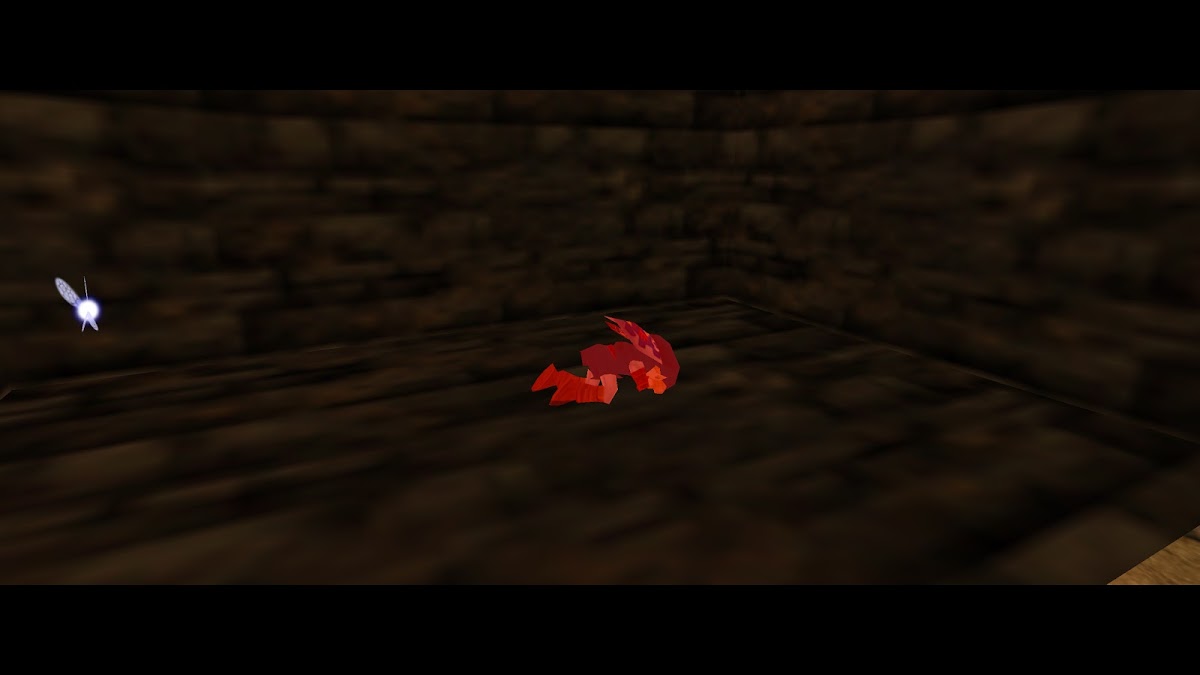 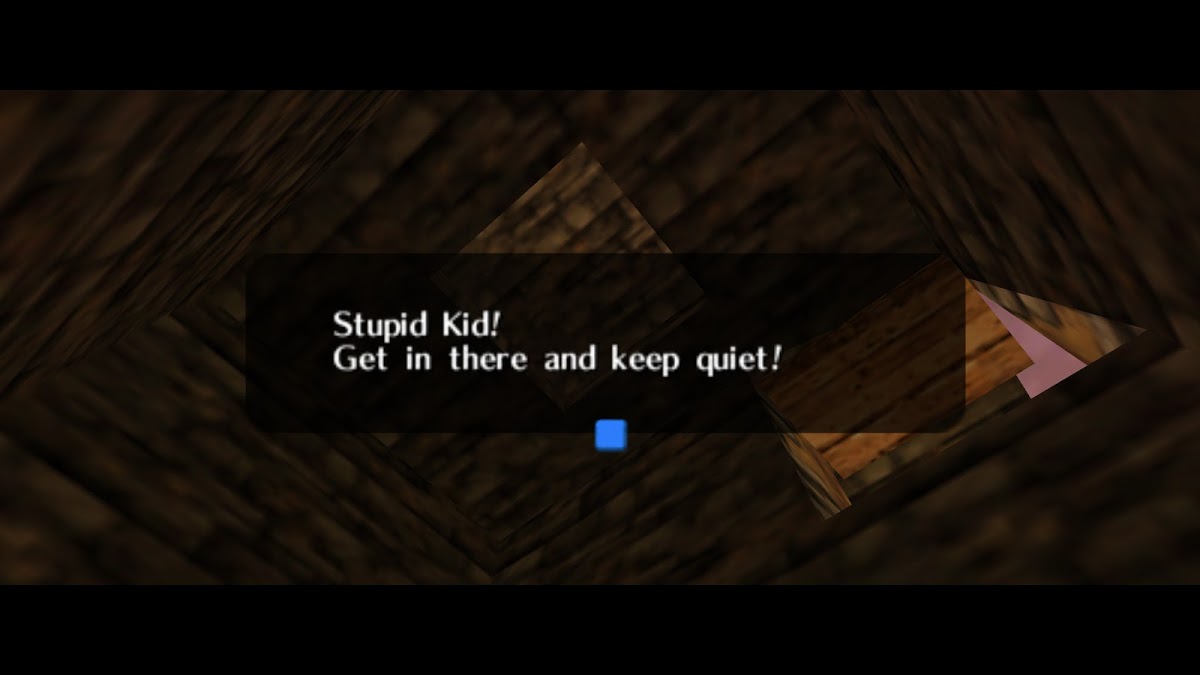 I'm thrown in Thief Jail!
Me! Link! Killer Instinct Himself! How dare they!

Fortunately, they're pretty bad at closing windows and I can just longshot my way outta there, using the plank atop it: 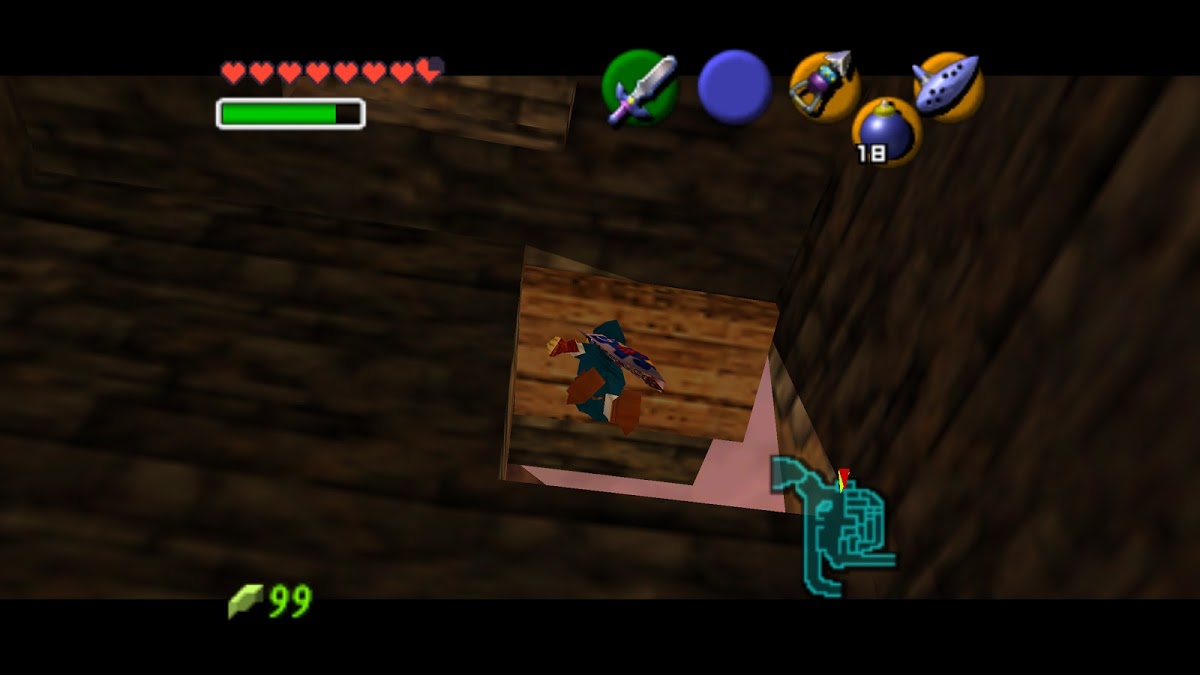 But now I'm just inside the place, and knowing that I just shouldn't get spotted by them, it's time to have a look around.

After some lookin' around and maybe another capture, I found this room with another jail cell in it. 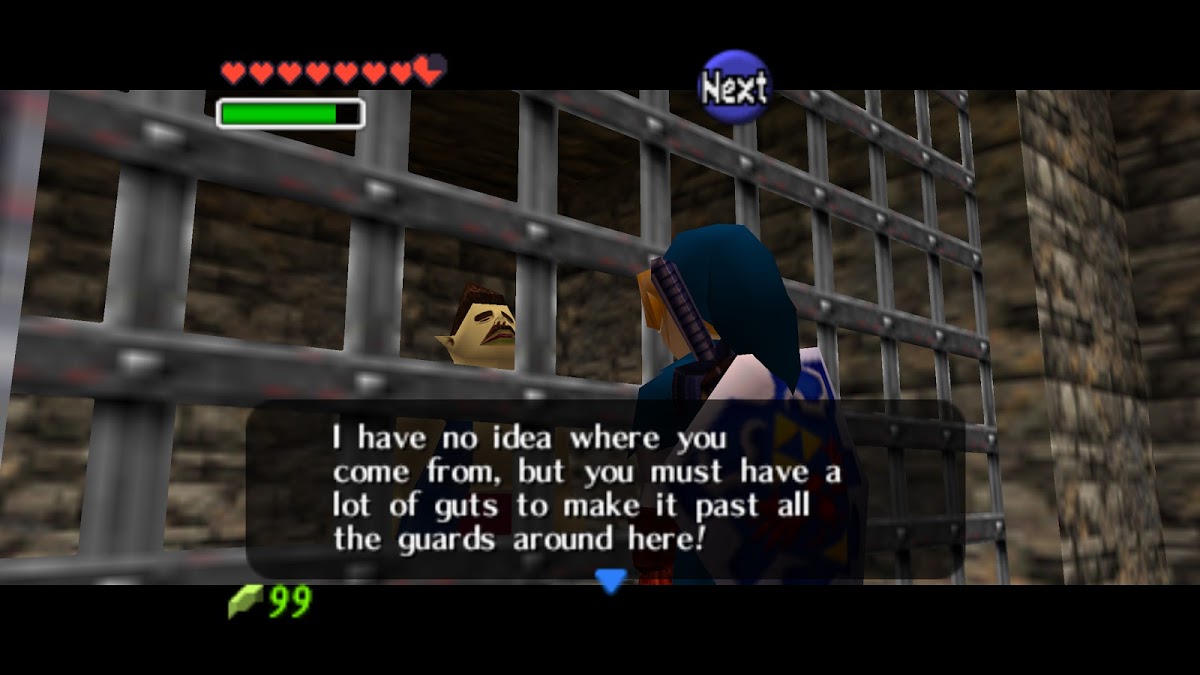 And he's all sad that he got imprisoned. Didn't go so well with the "joining the thieves" plan, I see. But then, as I'm talking, I get ambushed by a... well a Gerudo Thief. 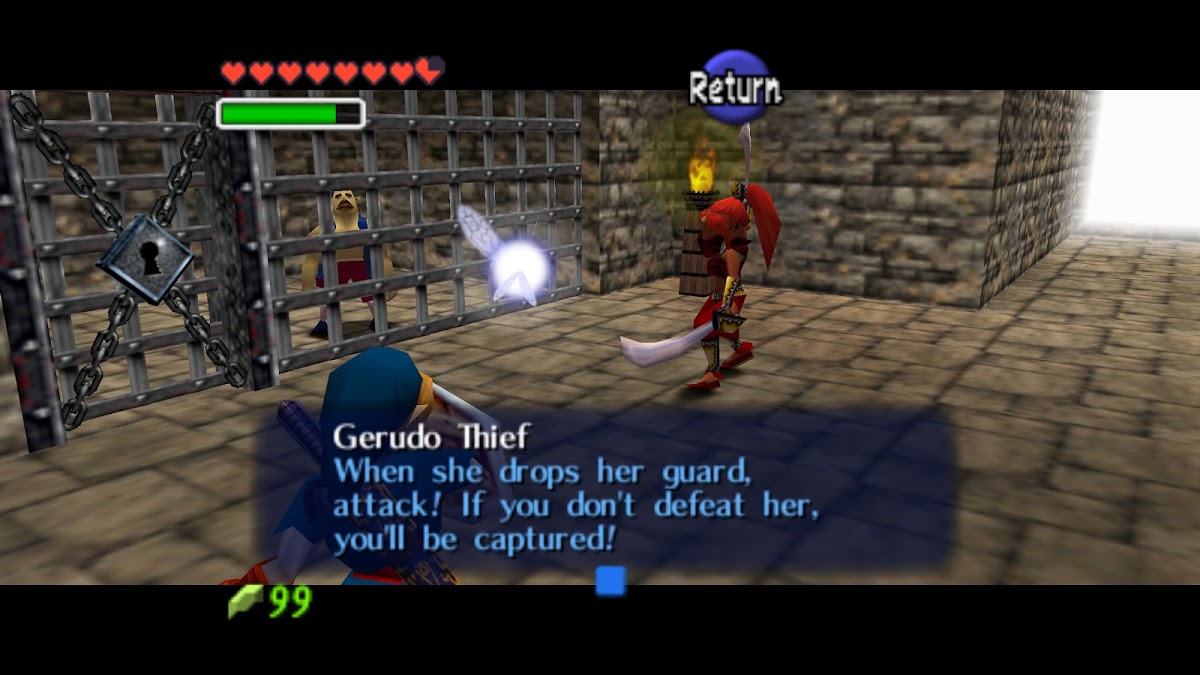 Which, so far, I haven't seen 'em thief much... more "Guard" and "Imprison" and "Shout". So I fight her, which is a fairly decent fight, and then she poofs away into the ceiling when I defeat her, but she drops a key.
Soo... now she's just going to tell everyone else, right? 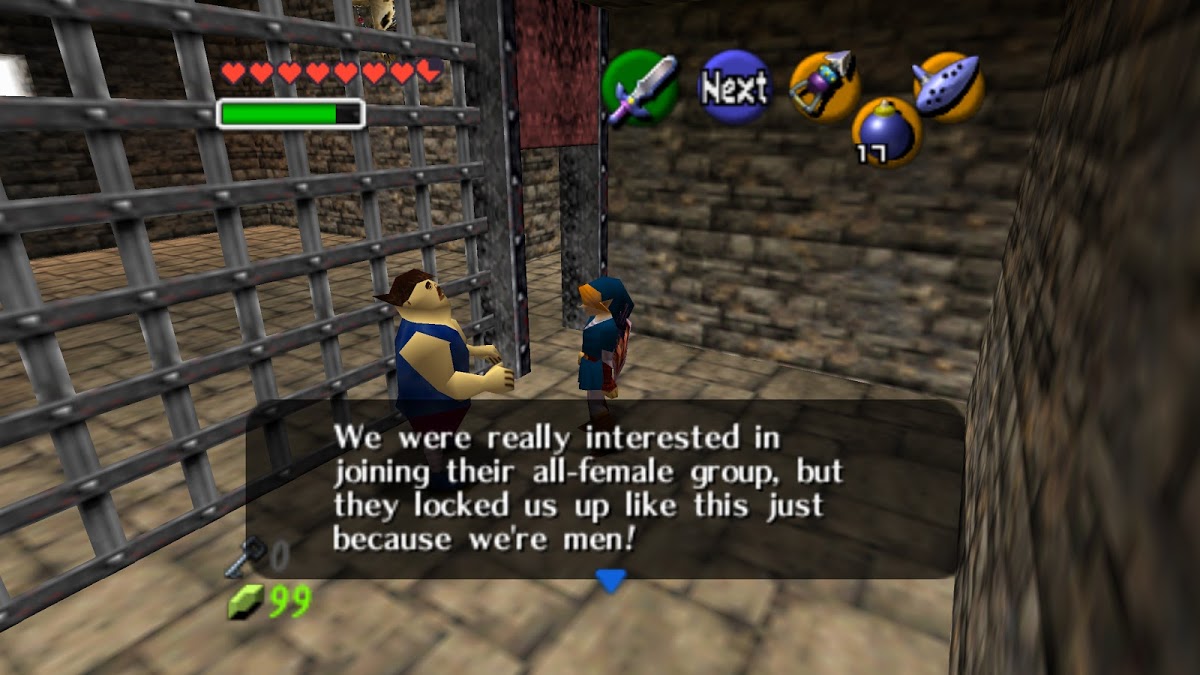 Oh. well. Should've thought that one through.

He says he's got three more friends in there who's all imprisoned and then he runs out like a scared cat. So, three more to go I guess?

Gerudo's Fortress is a big maze-like structure with doors that go in and out and multiple levels that lead to other doors that lead to other levels, and many of the rooms have guards--I mean thieves--in them that I can't sneeze in front of without being captured again, so this next part is a bunch of me trying to figure out where to go and being thrown back in jail and escaping and trying another path.
So they're pretty bad jailors, too, is what I'm saying. No communication. Just, non-existent. And the memory of a myth of a goldfish.


Eventually, I manage to rescue another one, but on the way I discover something even better! On top of the very fortress, is a large chest! The kind of thing they hide big, important items in. Sooo, I better find a way up there, right?

I am beginning to have my sneaking suspicion that I'm going to need a disguise to get through all of this place because it seems there are some rooms and hallways that are just permanently guarded and I have no way of getting through there with my now-boring blue outfit.

And then, meanwhile all of this exploration happened, Na'vi said something 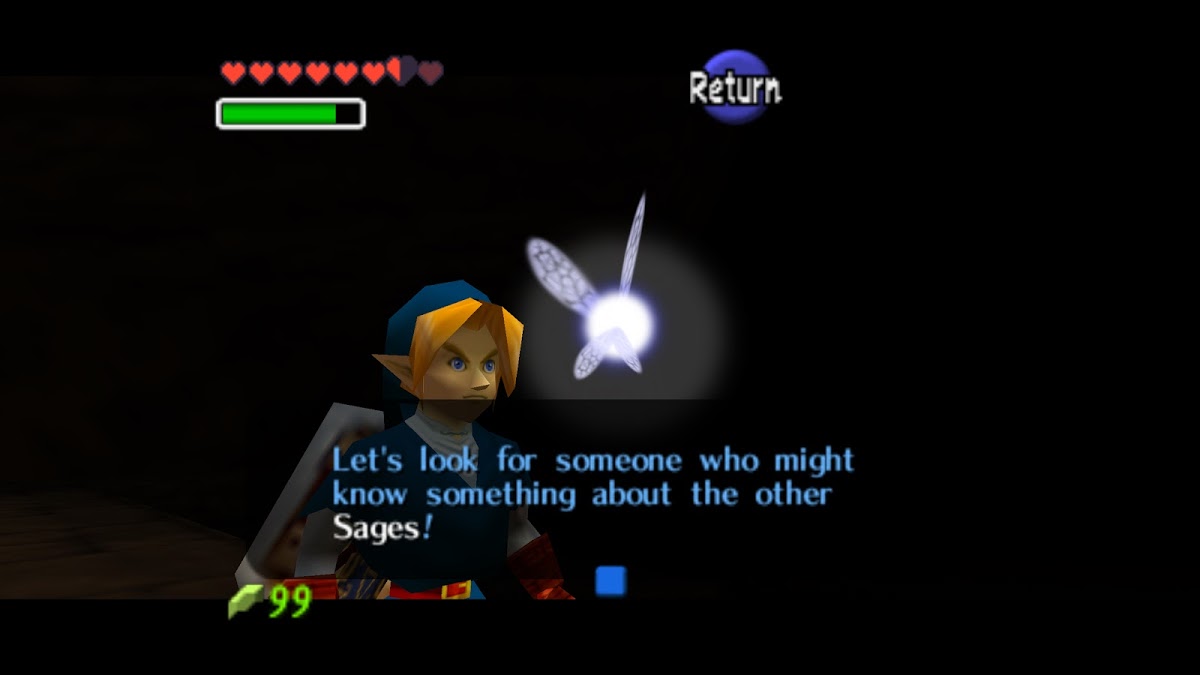 Oh, wait, yeah, okay, that might make sense I guess. But I'm in the middle of exploring this Fortress with dope music! Lemme be! So I make it up to the roof: 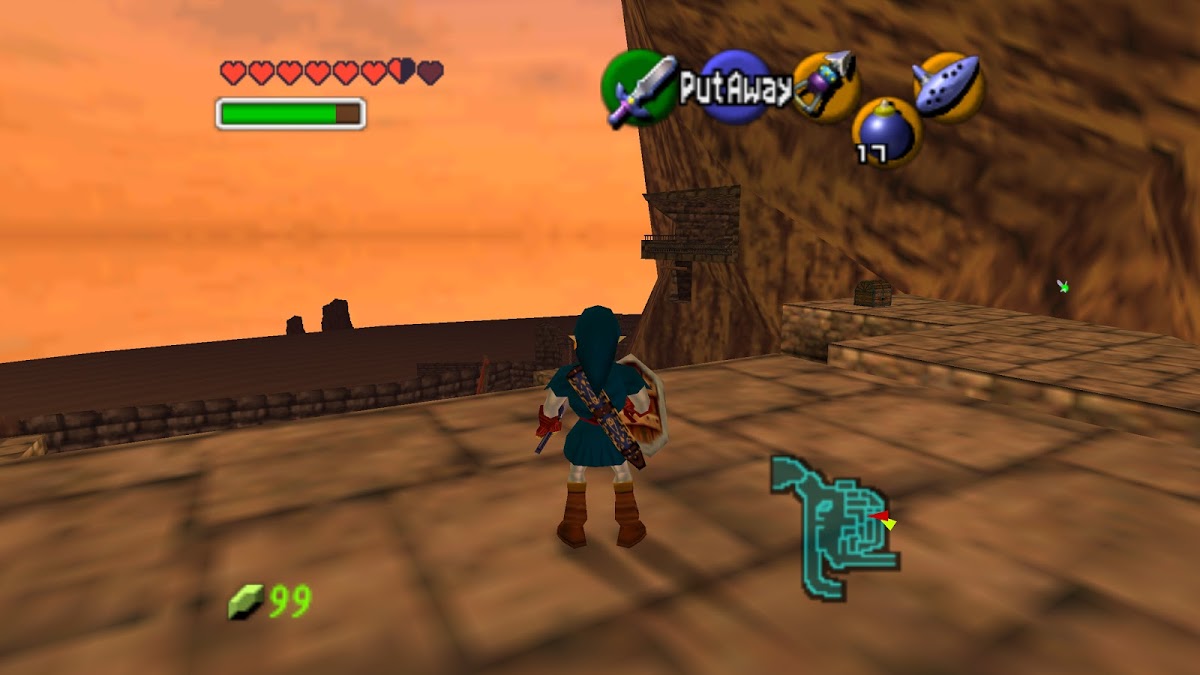 But there's no way to get over there. No grapple point on the rocks or anything. Until... I accidentally step all the way close to the edge and aim my Longshot at the chest, and a red dot appears.
I shoot and, fling, it catches! And I zoom over to the chest! 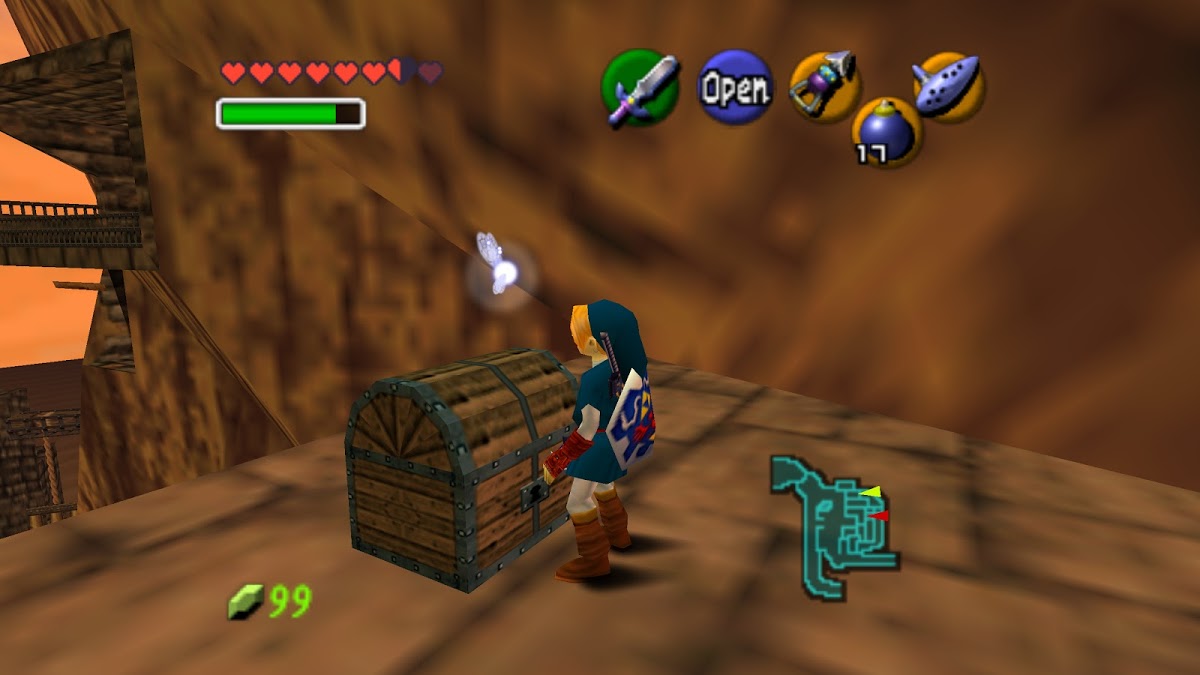 All right, let's see what magical powers I get now! 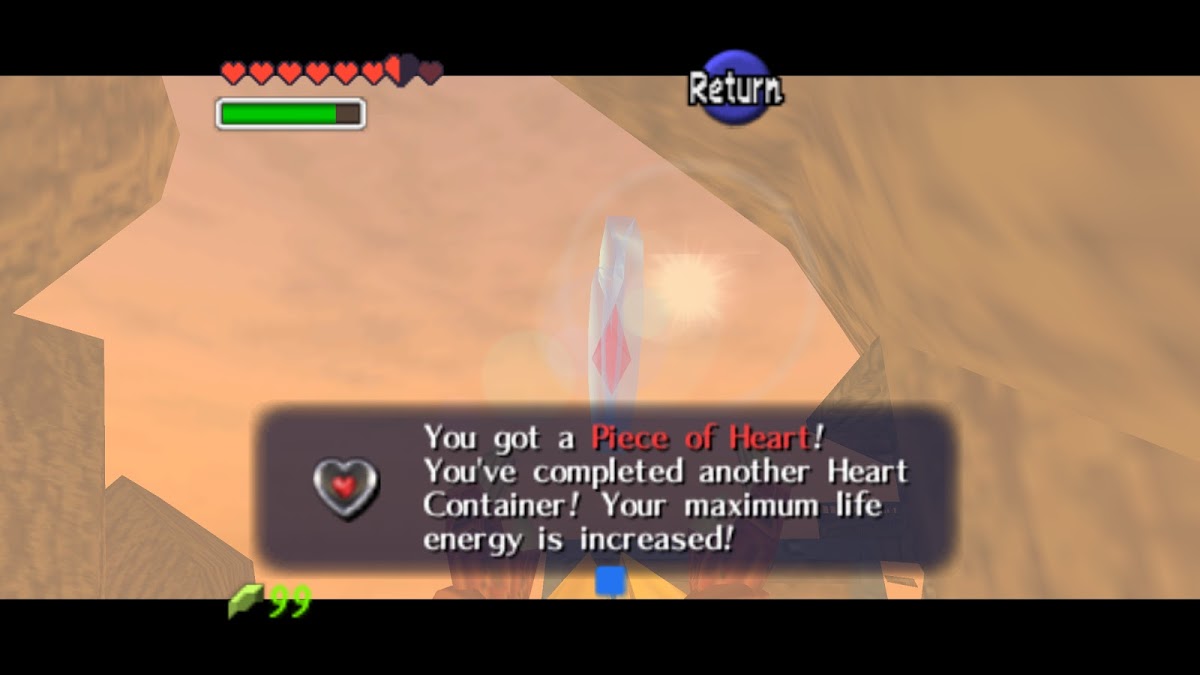 ...Oh. That was... not what I expected. So this was all just an optional thing. Wonderful.
Well, at least I got an extra heart out of it. That's something. I guess.
I guess.
Shitty chest.

Oh well, some more exploration down and I find the third prisoner, fight his jailor like before and get the key to get him out. 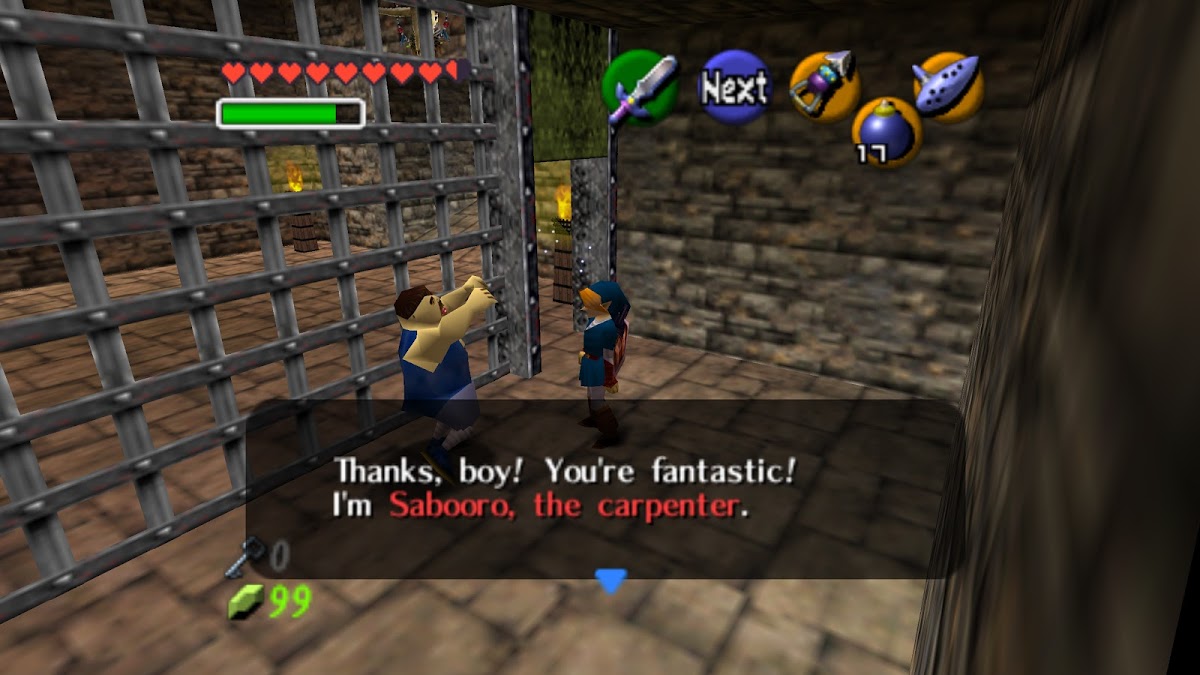 Who're you calling a boy?!

These prisoners have very bad tips. I am quite disappointed.

I explore a bit more, but get captured a couple more times, so I never find the fourth guy, and I'm not sure I'm even supposed to be here anymore (this was around the time when I realized that I had lost my ability to understand a compass), so stopped and said, eh, three people rescued, that's good enough.

So I'm not sure where to go from now. Maybe I need to rescue the fourth carpenter so they can build the bridge? Maybe that'll give me a disguise so I can get further? (there's a big gate to the side of the fortress I can't get through). Or maybe the disguise (if that's even a thing!) is somewhere else entirely? Or maybe I'm just supposed to go darn East like the thing said. But who listens to old rocks when they can listen to music? That's what my... well, someone said that, probably. And some point.

Anyways, that's it for now! Hope you enjoyed this rambling mess where I didn't do anything I was supposed to, but I had fun. And I needed to do this eventually, no doubt. Sooo, let's find out what I was actually supposed to do... next time!