Last time, we struggled to get into the Shadow Temple and, once in there, found out we couldn't actually do anything in there until we got the "eye of truth", which, through some outsourcing magic, we found out was at the Bottom of the Well in Child-Link-Land. So now we're here: At the bottom of the well: 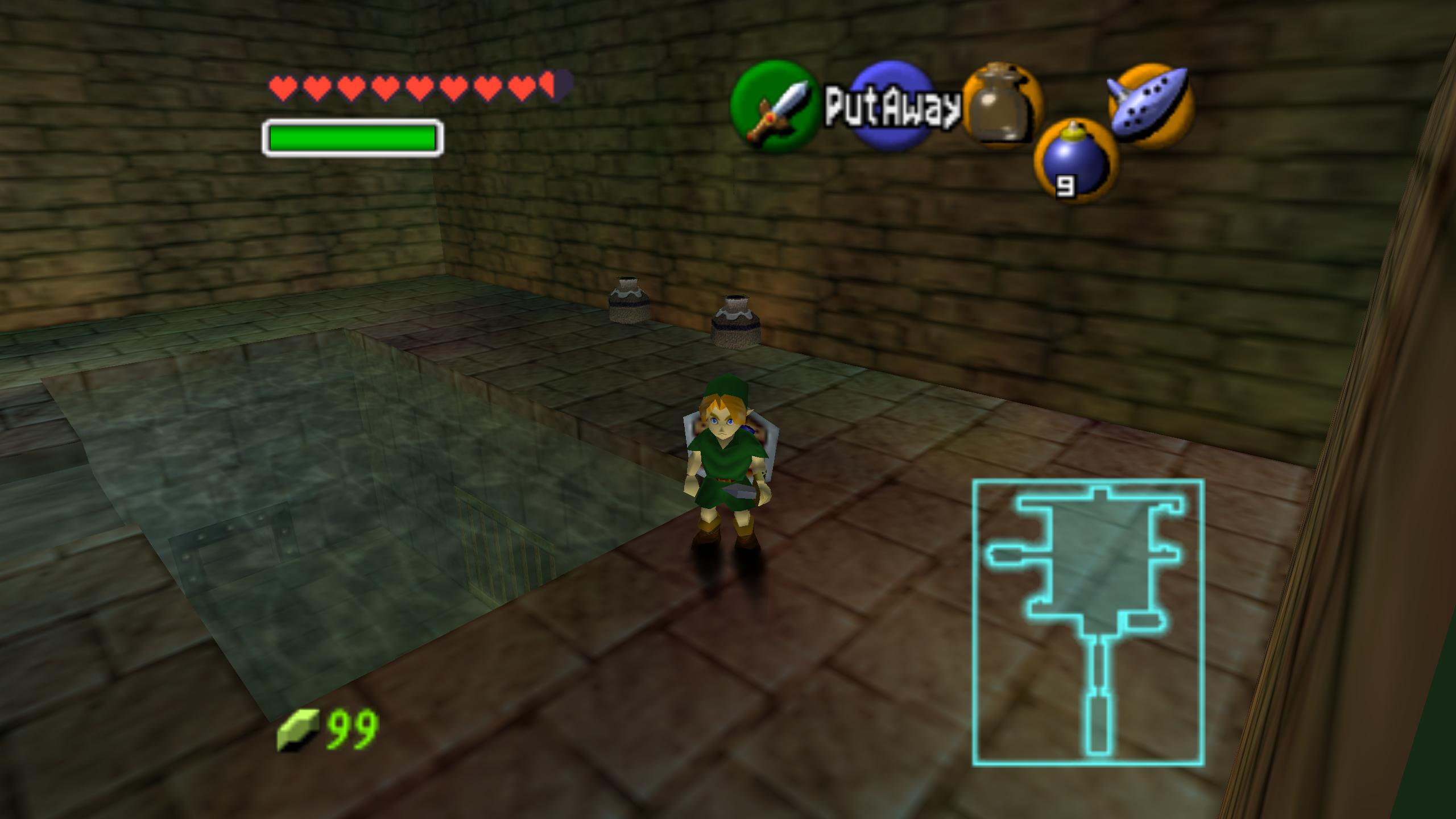 It me. Child Link. You know, the one that has proportions that make sense.

And this place's got all the fake walls you could ever want, so I walk around the outer circle trying to go into any wall that looks suspicious. Until I stumble upon the other side where we find something familiar. 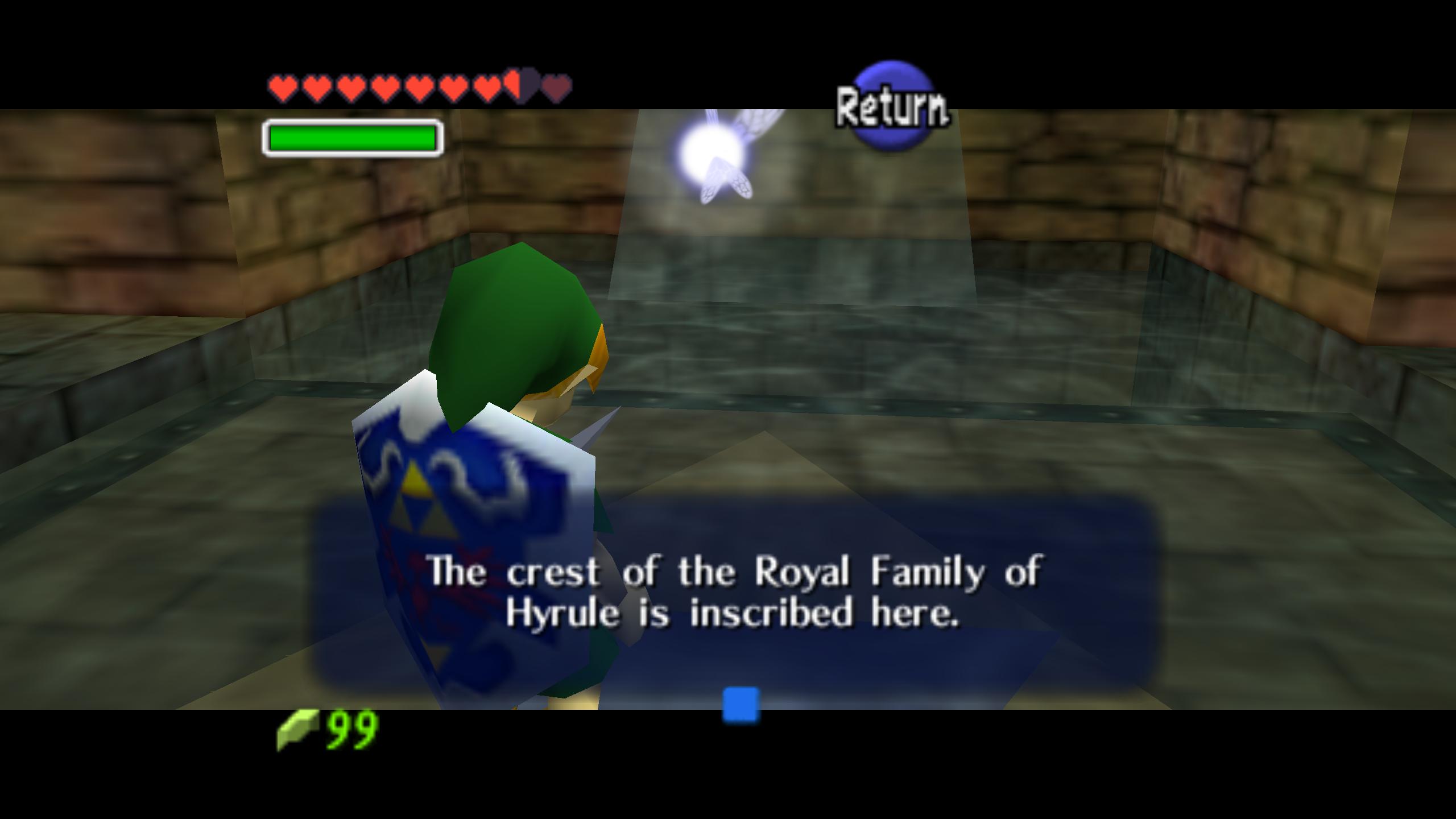 You know what that means! 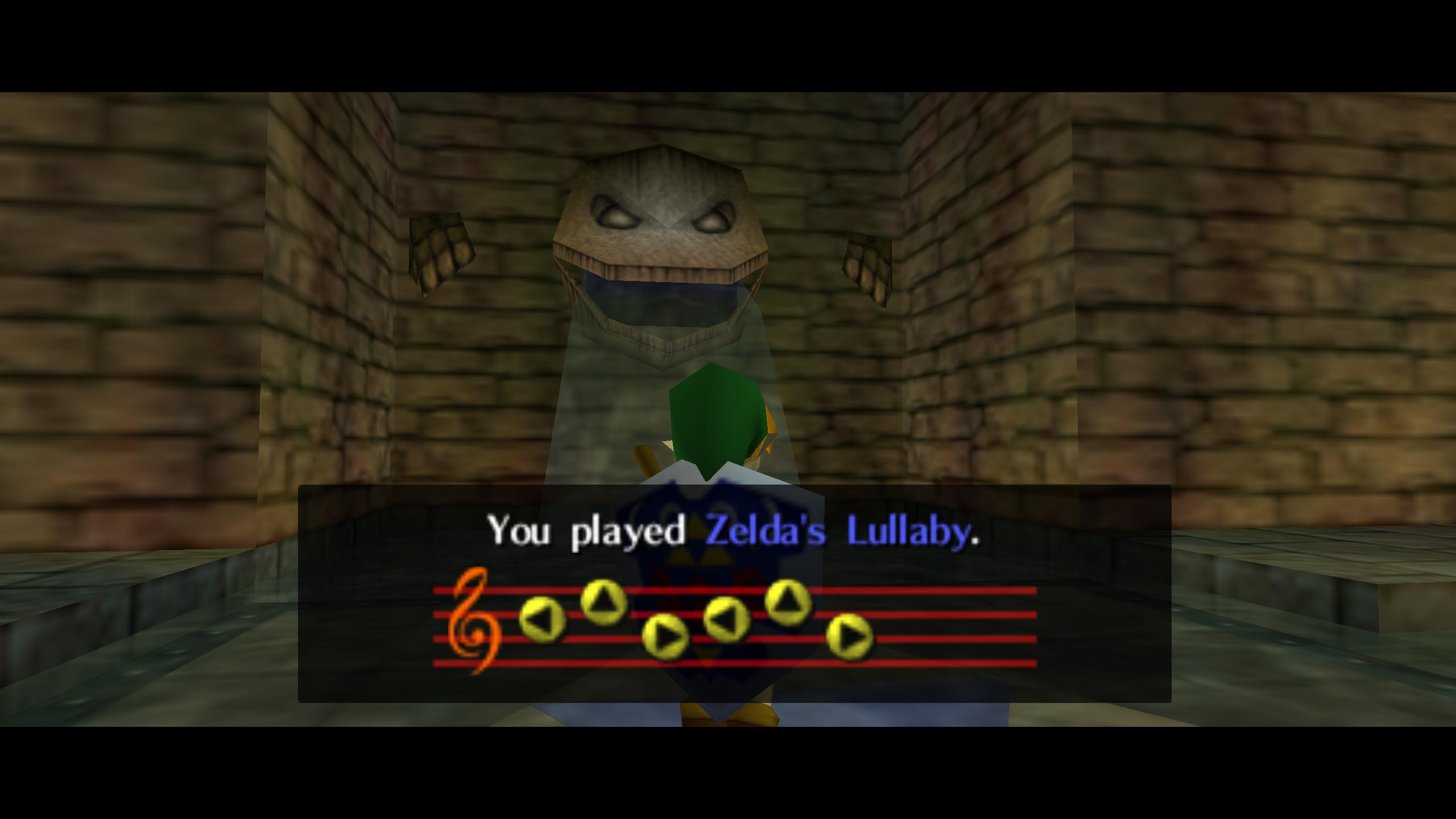 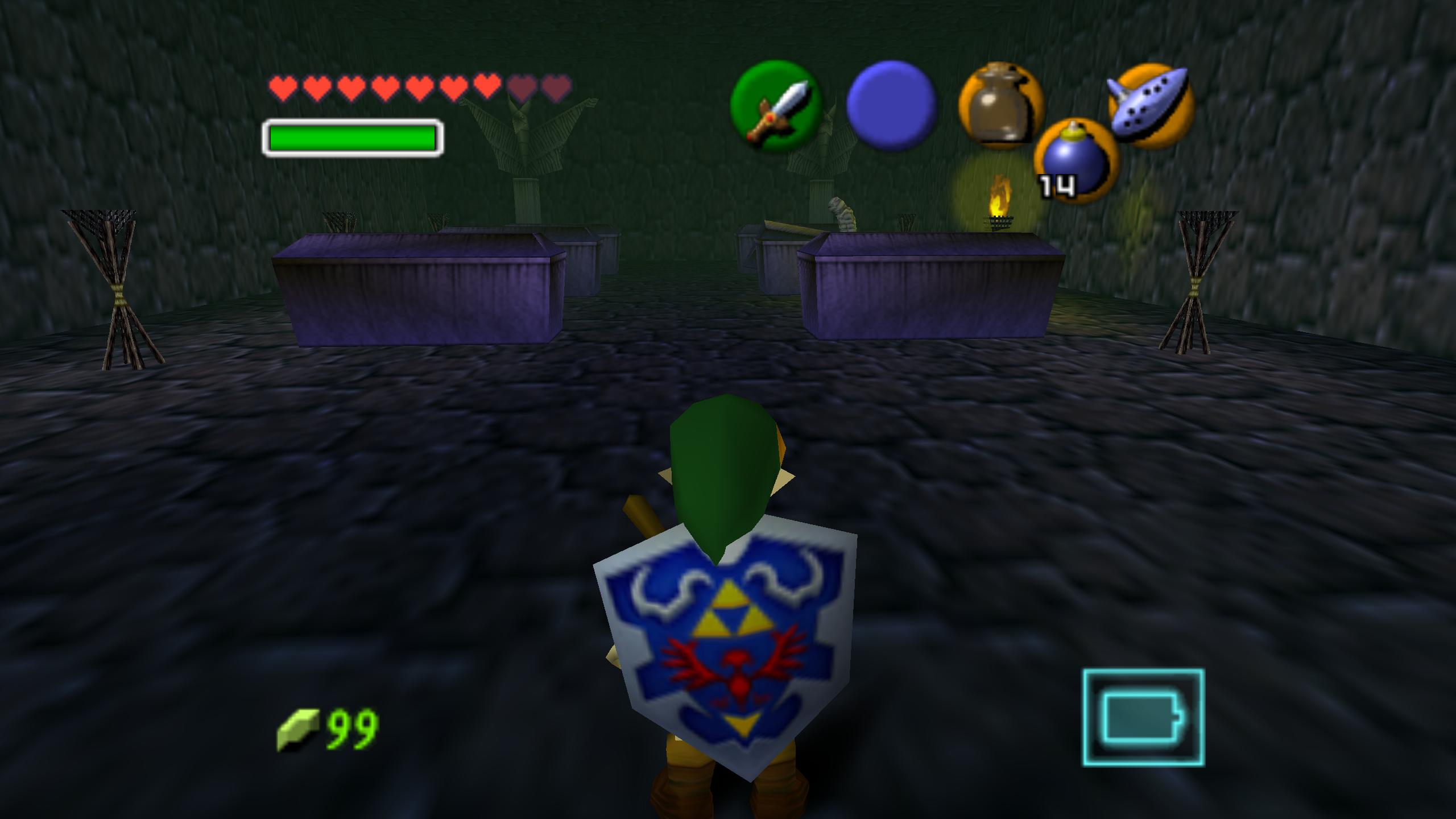 Why is it that when I play Zelda's Lullaby, things always seem to take a turn for the worse?
(Ok this wasn't right after each other, but playing the melody lowered the water (another common occurrence!) which opened the way to this place.)

I do the fire dance to open all the tombs and find in them bats, mummies, more bats, and some hearts, and finally, a small key.
Which I use to open a door to find... a Gold Skulltula. I feel like that wasn't worth it.

(I know the Gold Skulltula's are actually used for something. But I do not care. I so far haven't found a reason to spend money, so why do I need more of it?)

Some more exploring and we bump into this room. 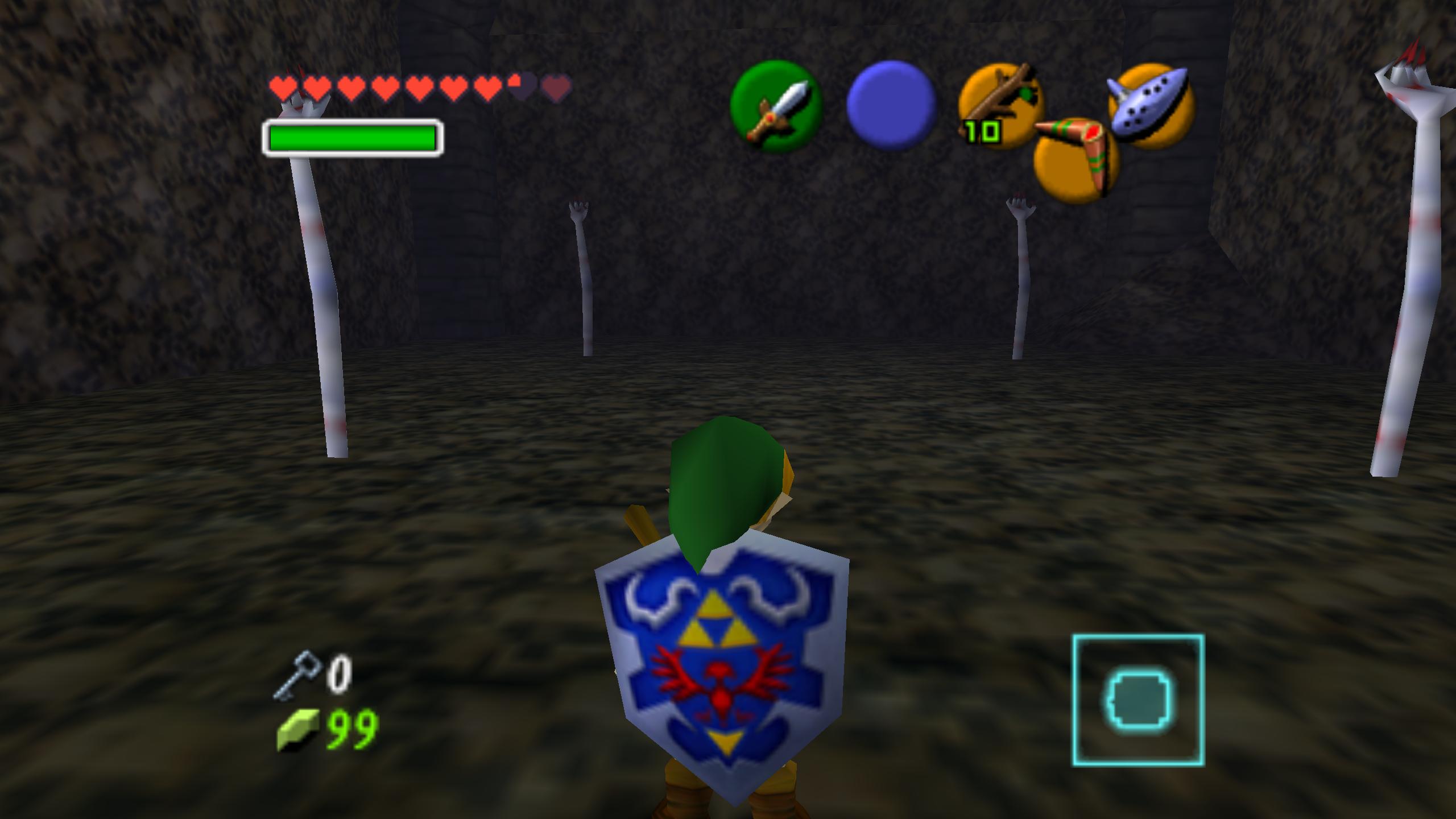 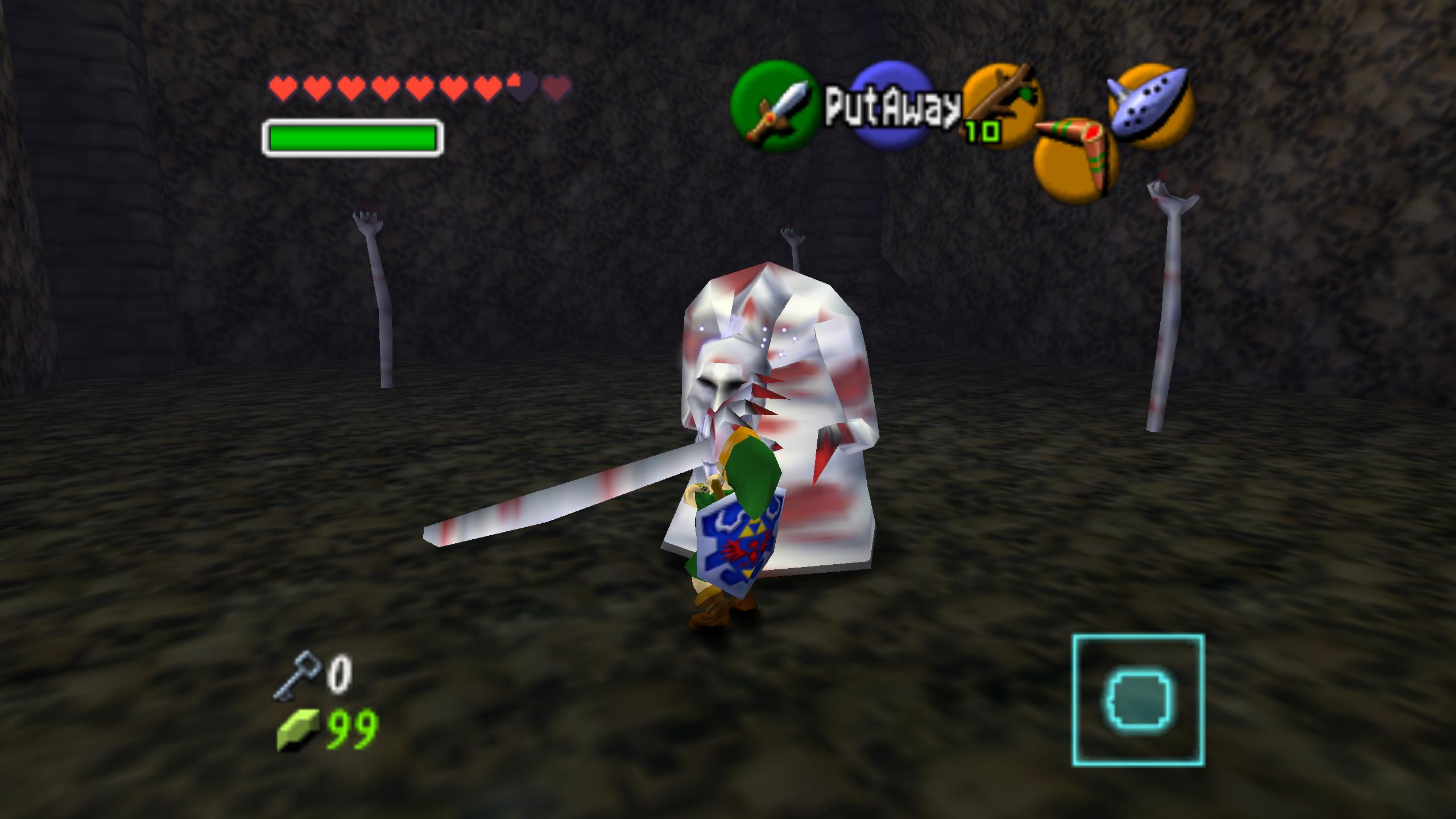 Aaah hello is this the kitchen? I could do with some fried chi--

Guess the dinner is me since he's trying to eat me.

Ineffectively, since he takes a bite and then vanishes until one of his (stationary) hands tries to grab me and holds me as he slooowwllly makes his way to me.
Unless I just break free and whack him a couple times with a sword. He seems to have no real answer for that.

I do sometimes wander the logistics of an enemy like this. I assume he doesn't need food because he's not getting any like this. But then what? He's just stranded in this room he can't get out of. And are the hands connected to him? How do they move?
Sorry, anyway. 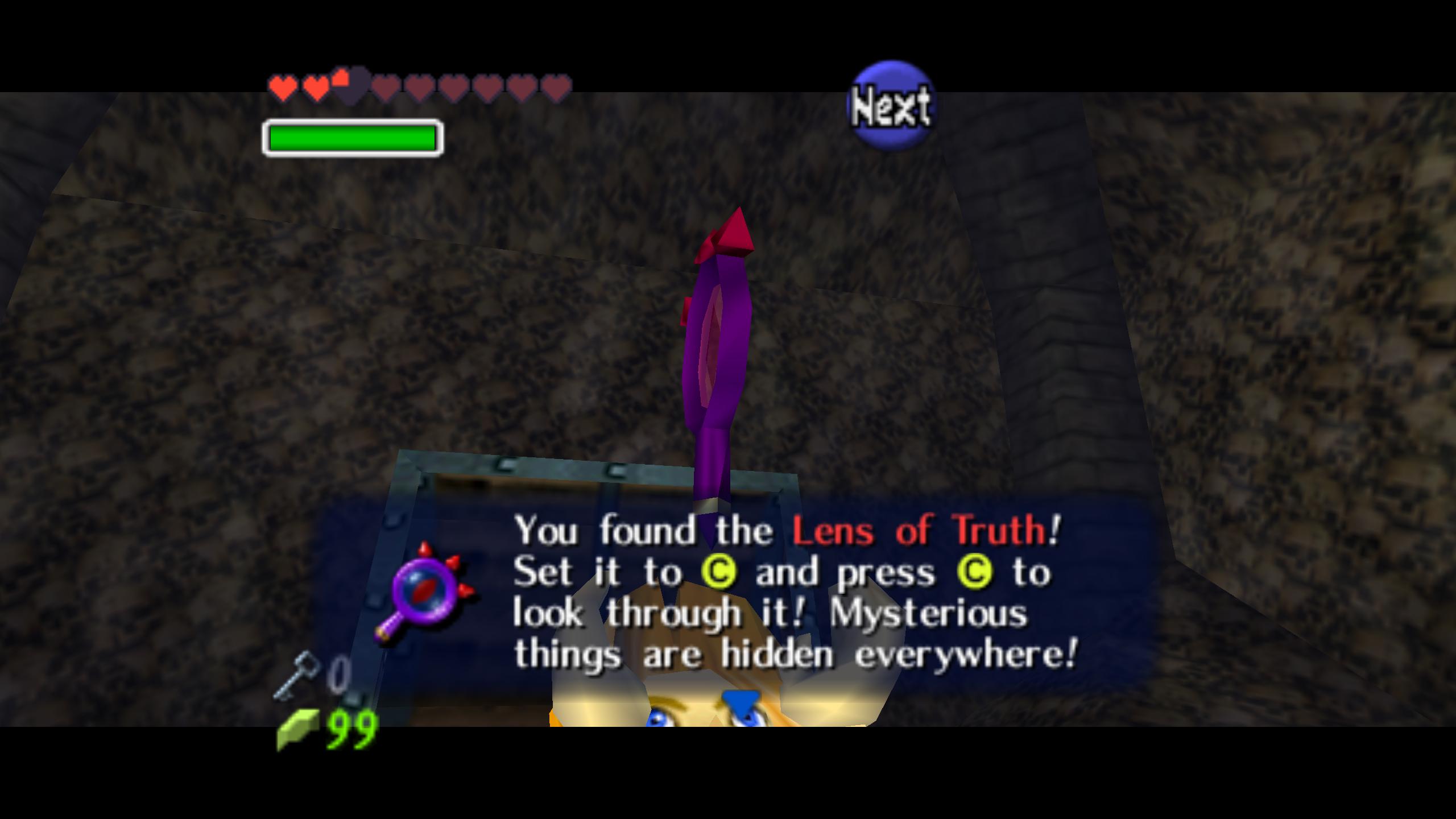 Oh look at that! The truth shall be revealed!

As you may have guessed, this little thing shows all the fake walls, so now this place is a lot easier to navigate. So I do some more exploring and find some more collectibles and smaller things but eh, who cares, you're here for that good stuff: 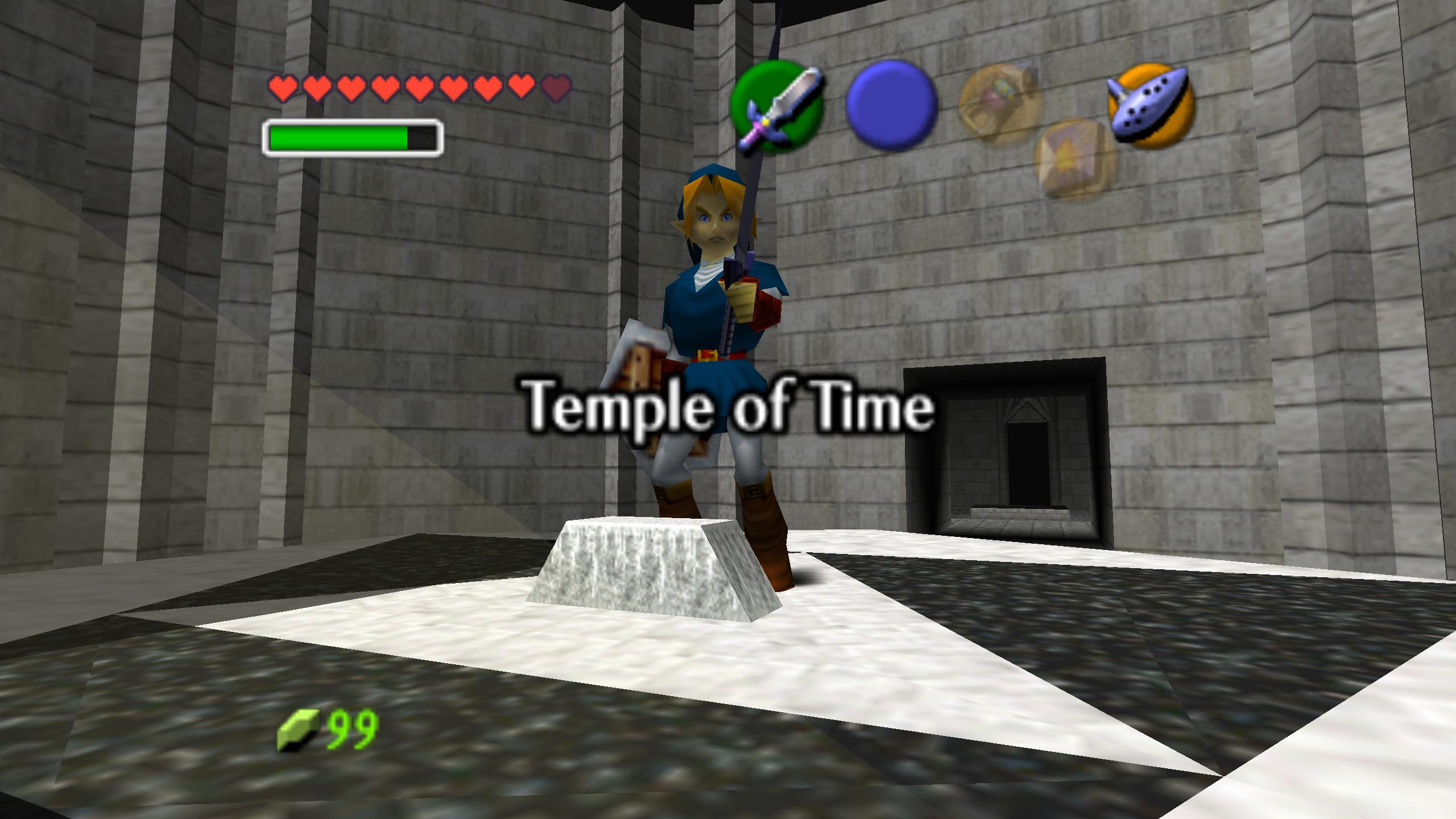 And answers to the true mysteries: Can we do anything with these now? 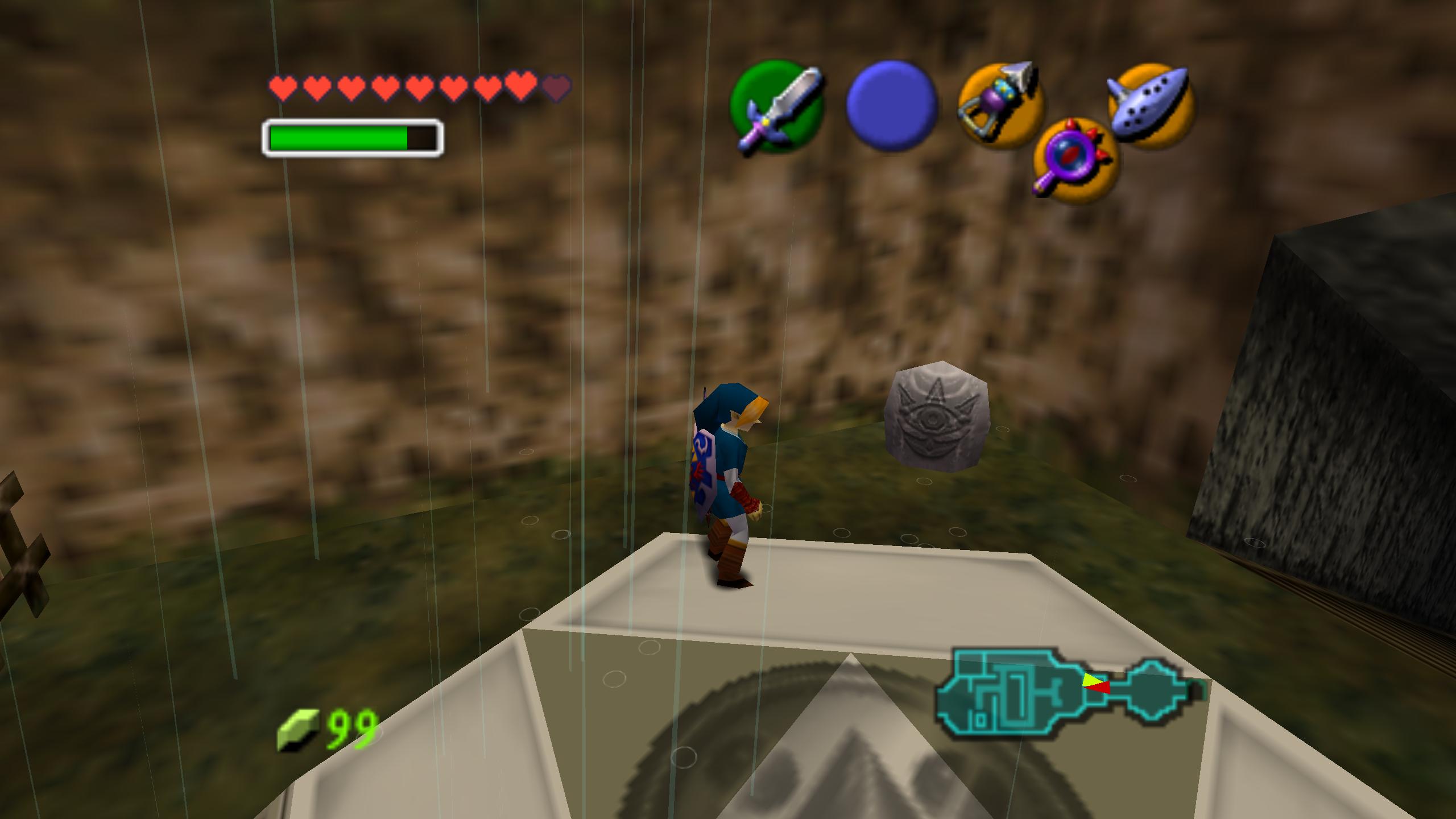 The answer is no. The lens of truth does nothing.

Alright, whatever time to push a bird-statue around: 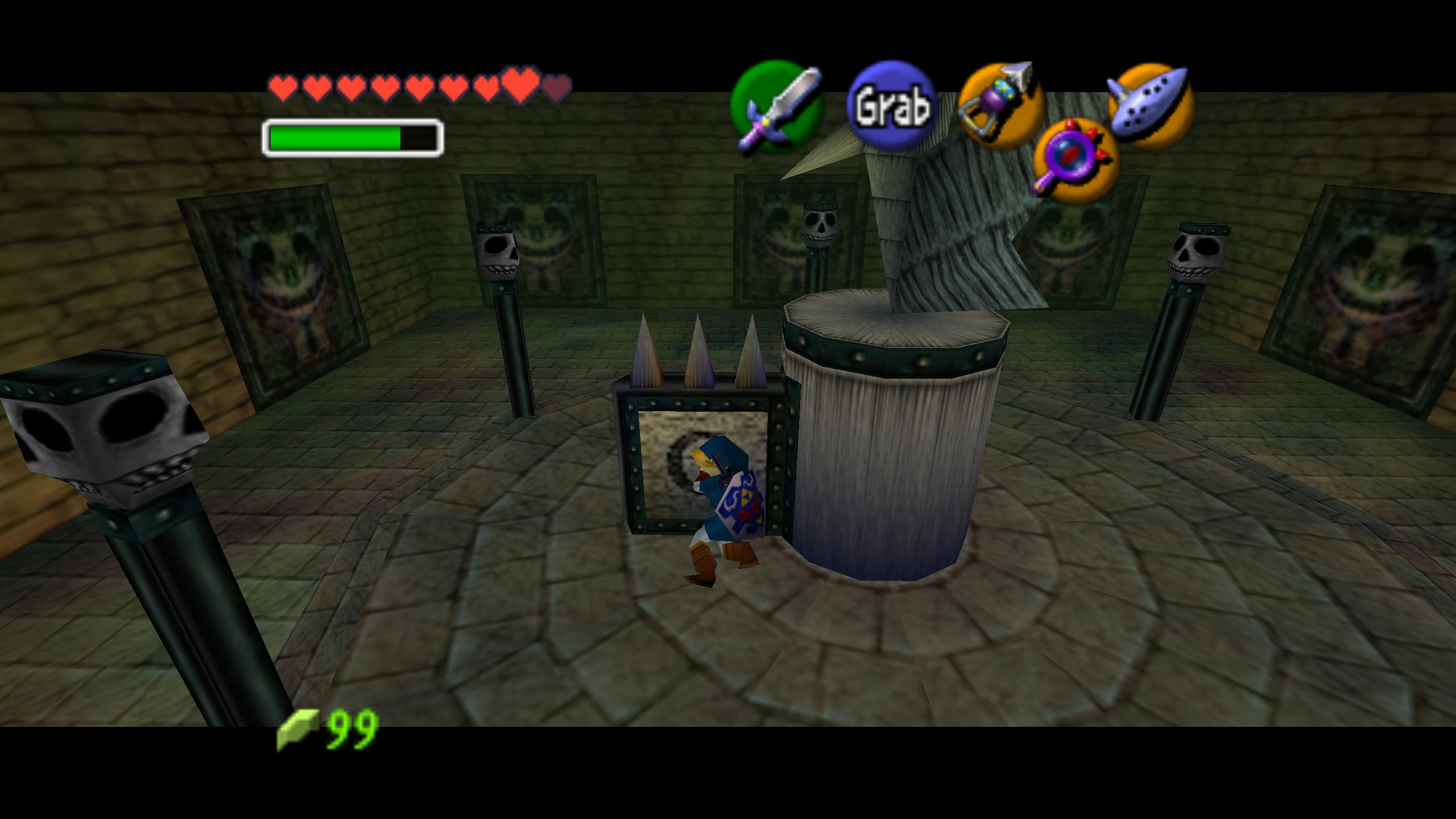 If you don't remember it said to hit the skull of truth. One of the skulls doesn't disappear in eye-mode. So, bang, right on the noggin'.

Door opened, to no one's surprise, so let's hope this reveals something about those "sacred feet" we need for the other thing. 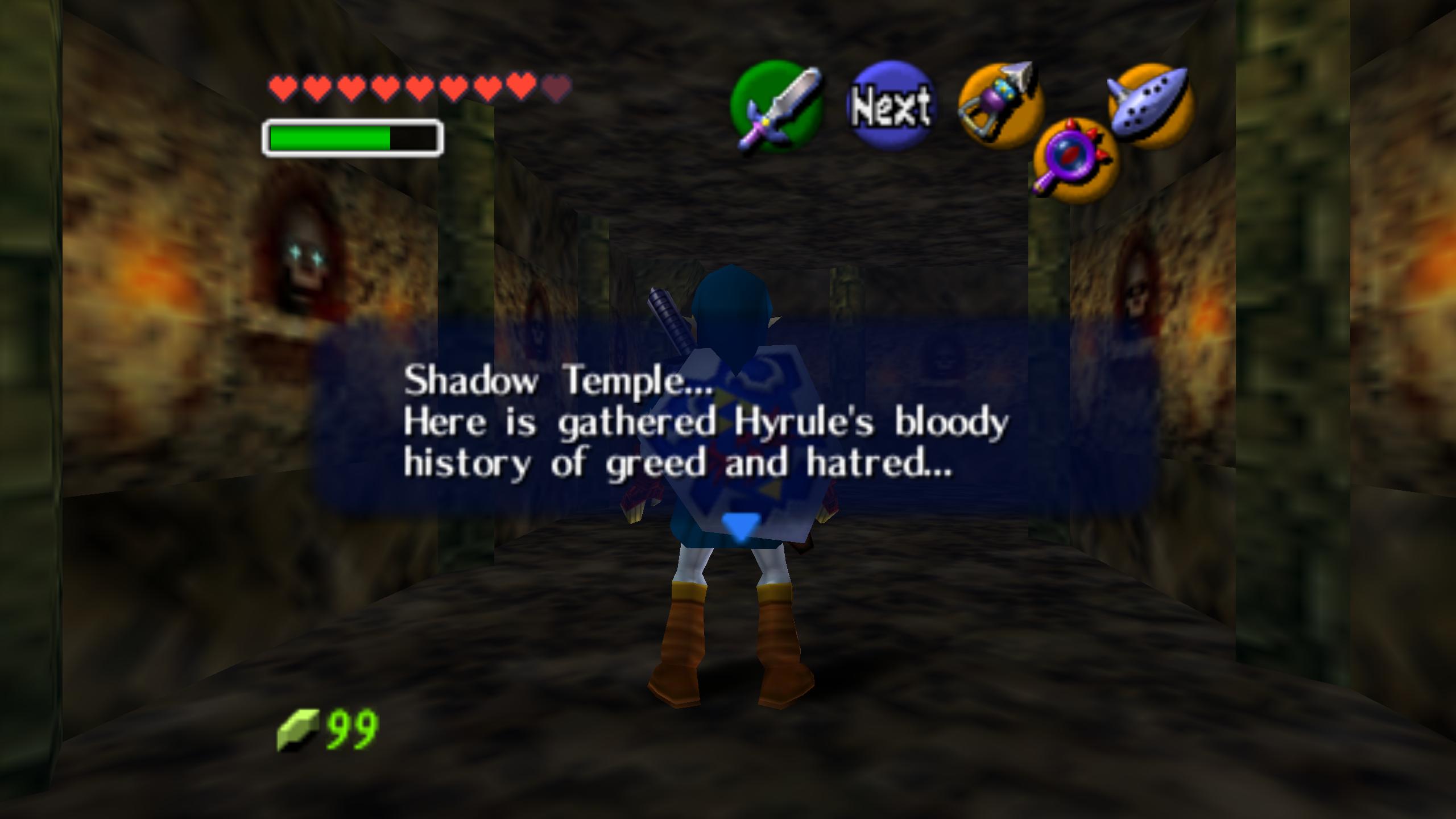 It just throws this in my face. Like, woah, hold up game, you gotta sit right there and

You can't just say that without..

Ok, apparently you can.
Like, that's all it says. Just randomly popping it up there, as I'm wandering the graves of who knows who, someone just "told" Link that this is where the bloody history of greed and hatred lies and then it's just like "well, have fun fighting this Hand Guy again!" 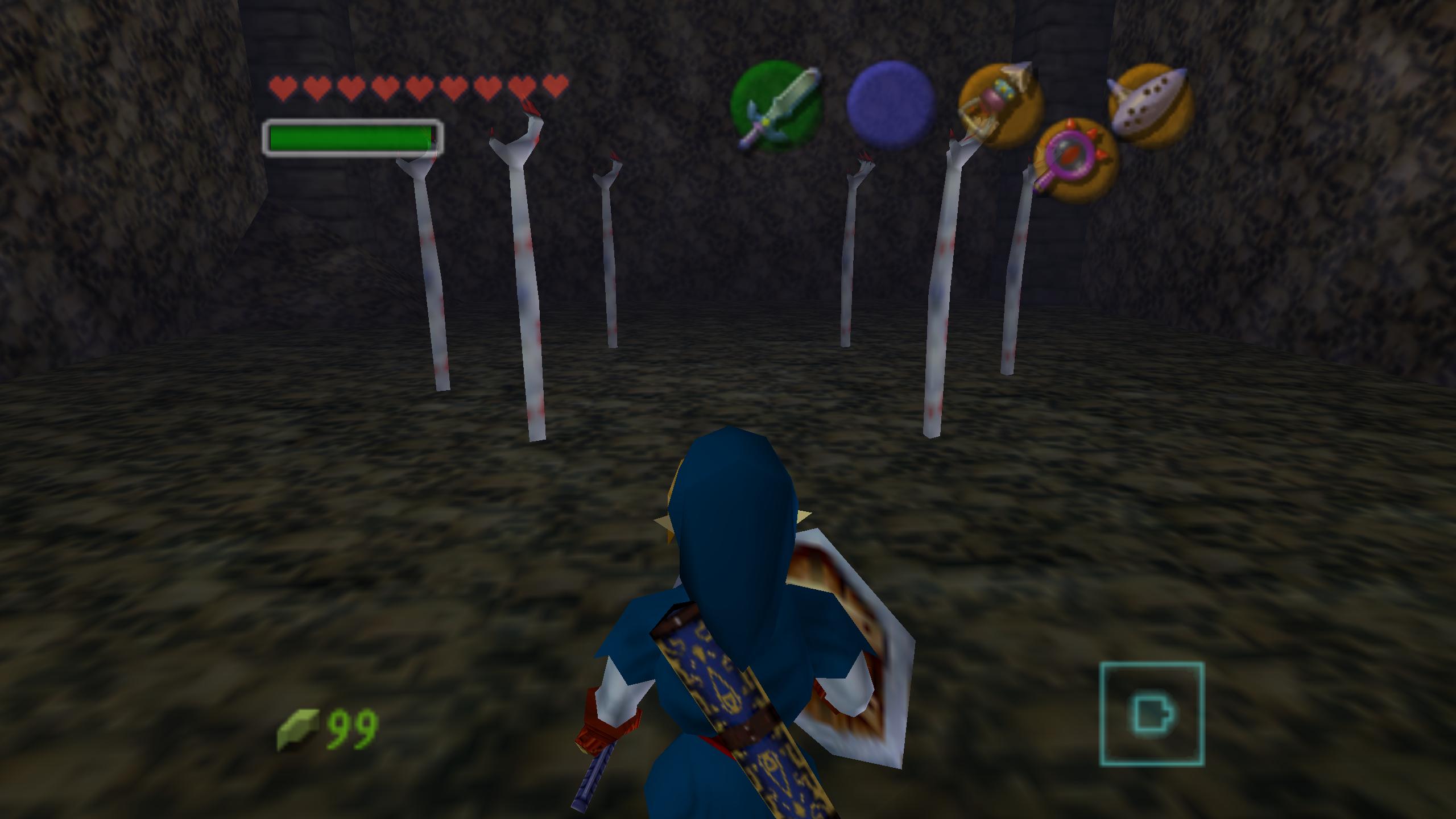 The best part? It says it multiple times! It just pops up with that message several times as you're walking in those hallways, along with some even vaguer ones about seeing the truth and the darkness is bad.

But inside all that darkness? 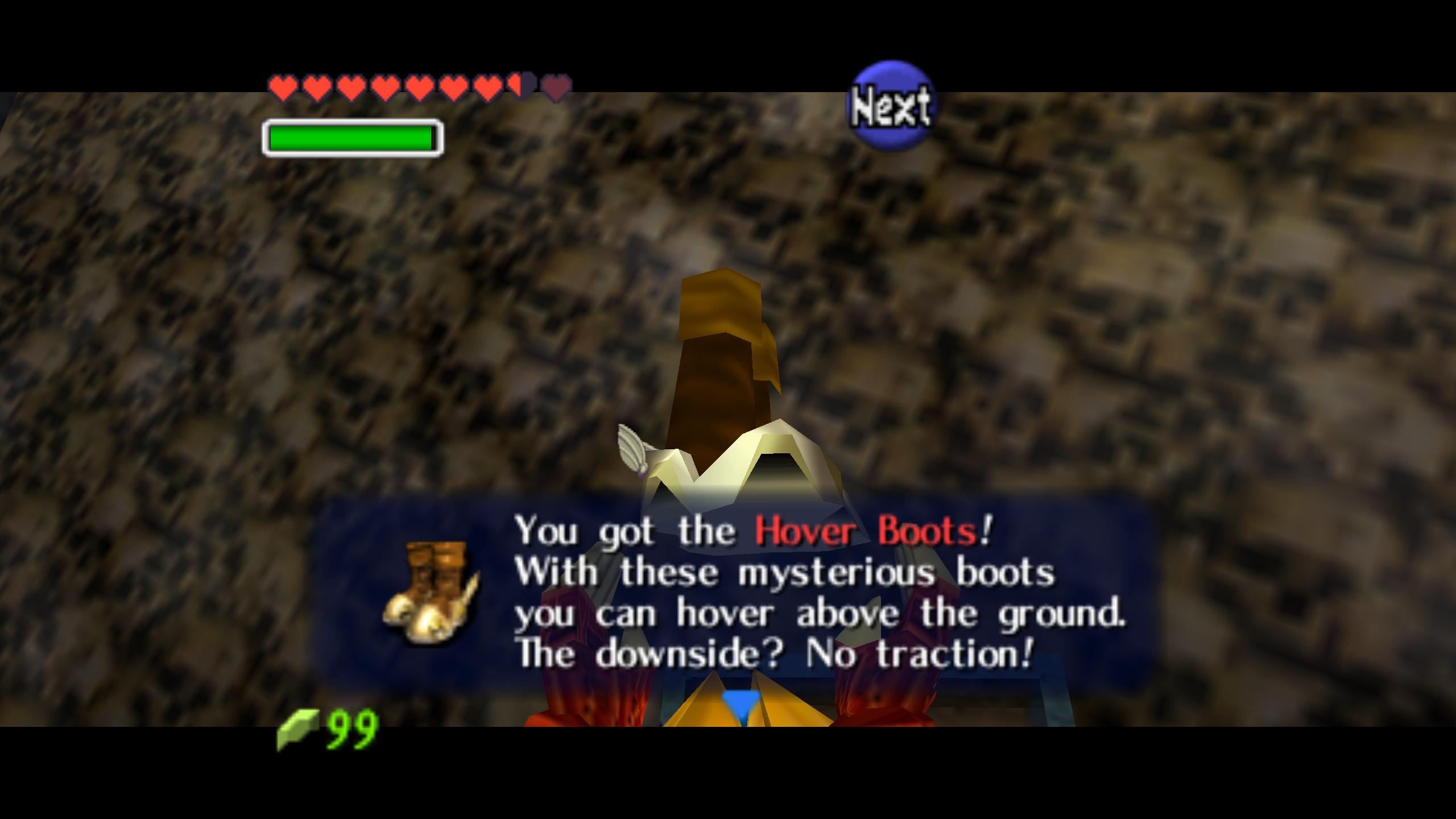 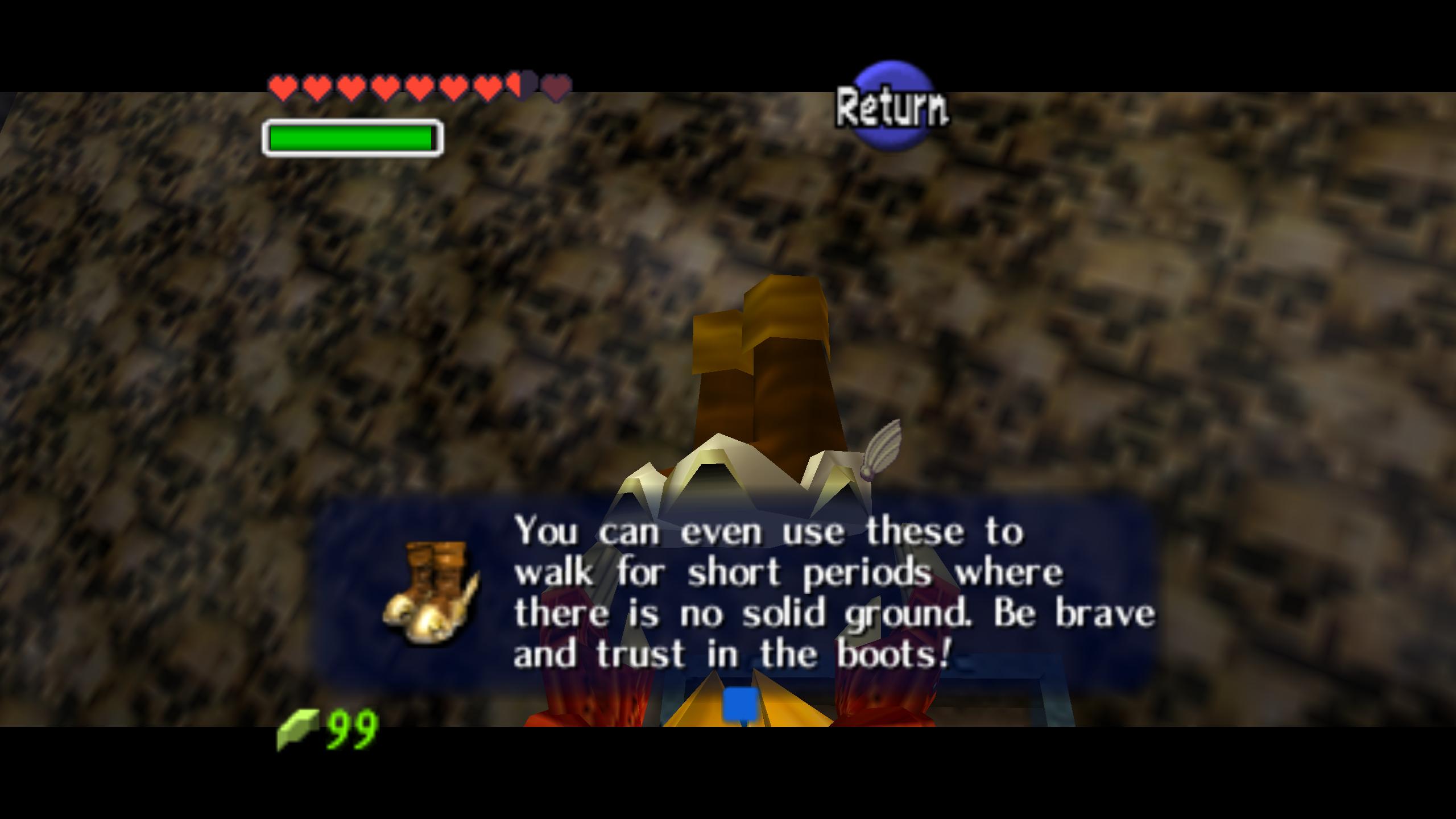 Always trust in the boots!

All right, I assume these are the sacred boots. Despite them being called "Hover" boots and being in the back of an ominous cave that spouts darkness nonsense to me. But they got little wee wings, so that means they're sacred!

I go back to the bird-room and try them out, and sure enough there's no traction at all, you just slide around on ice, but leaping over a cliff you can hover just long enough for Link to grab onto the edge and proceed down, further into the Temple. 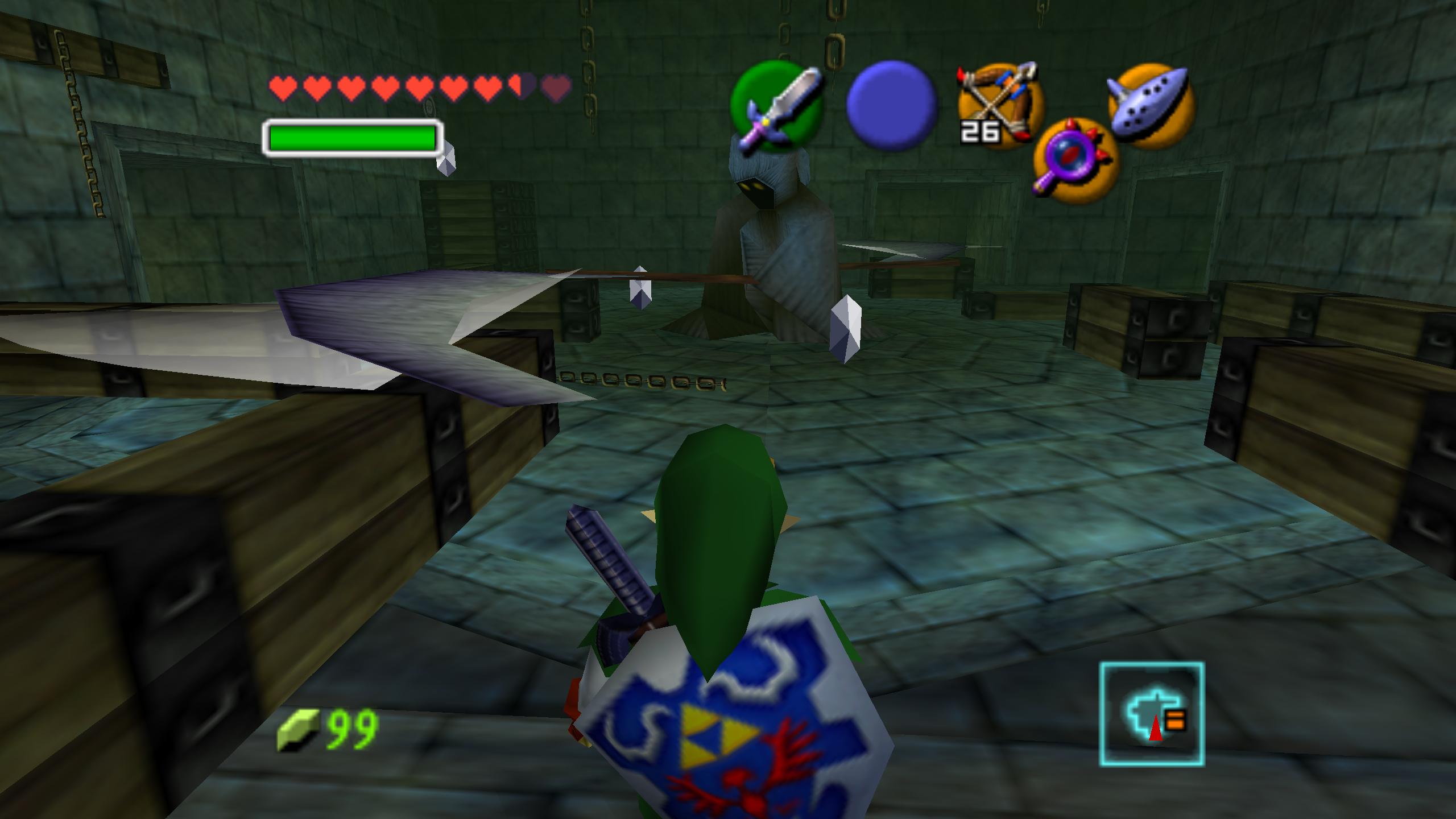 There's two sets of rooms after the hover-pass and one of them's this Spinny Reaper Chamber, in which I get a small key after all the white crystals are collected. But the two rooms ultimately amount to nothing else and turns out I have to bomb my way to the third path, despite that looking exactly the same as the other two that I can just see through with the Eye of Wall-Seeing. 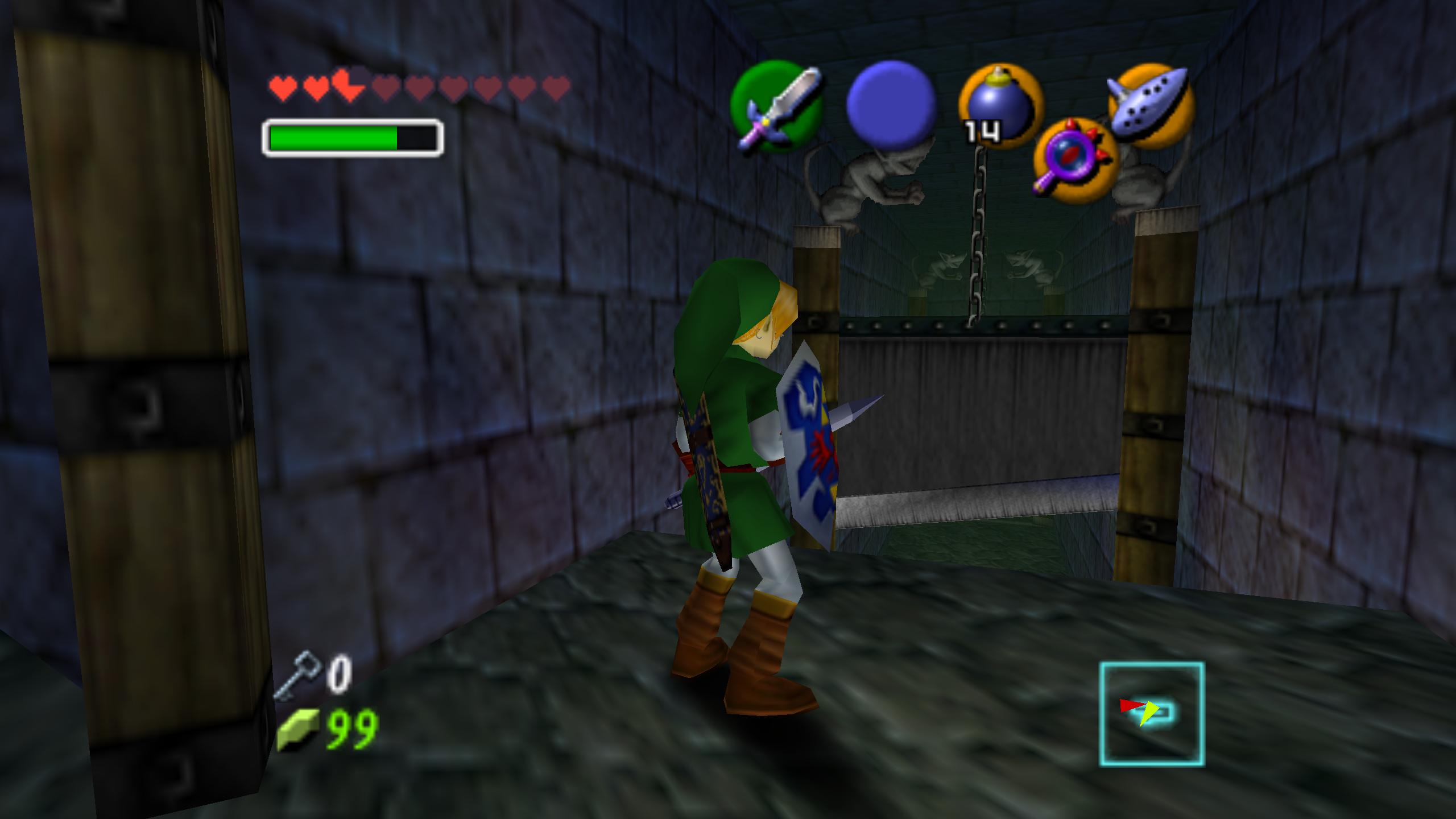 Reaaallll thick.
Also, is that rats? Why rats? There hasn't been anything about rats so far? Maybe the bloody history of Hyrule is... rats. There were once rats! And they were greedy and hateful! And caused much despair!

Right after those guillotines is a long hallway with some Spiders that just appear through the ceiling to come and claw at you. 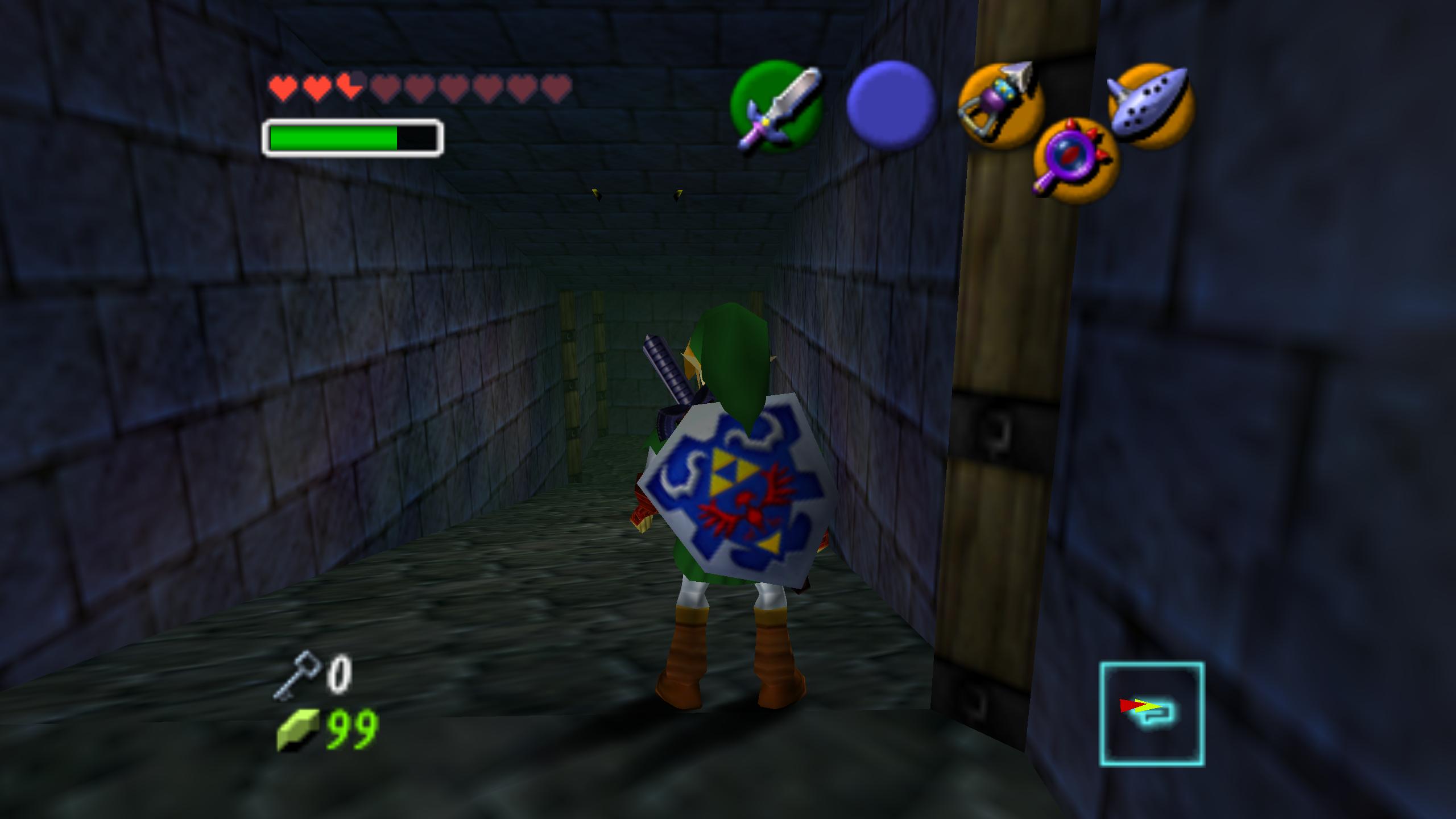 Look at those tiny spider-feet clipping through the ceiling. That's just unfair. 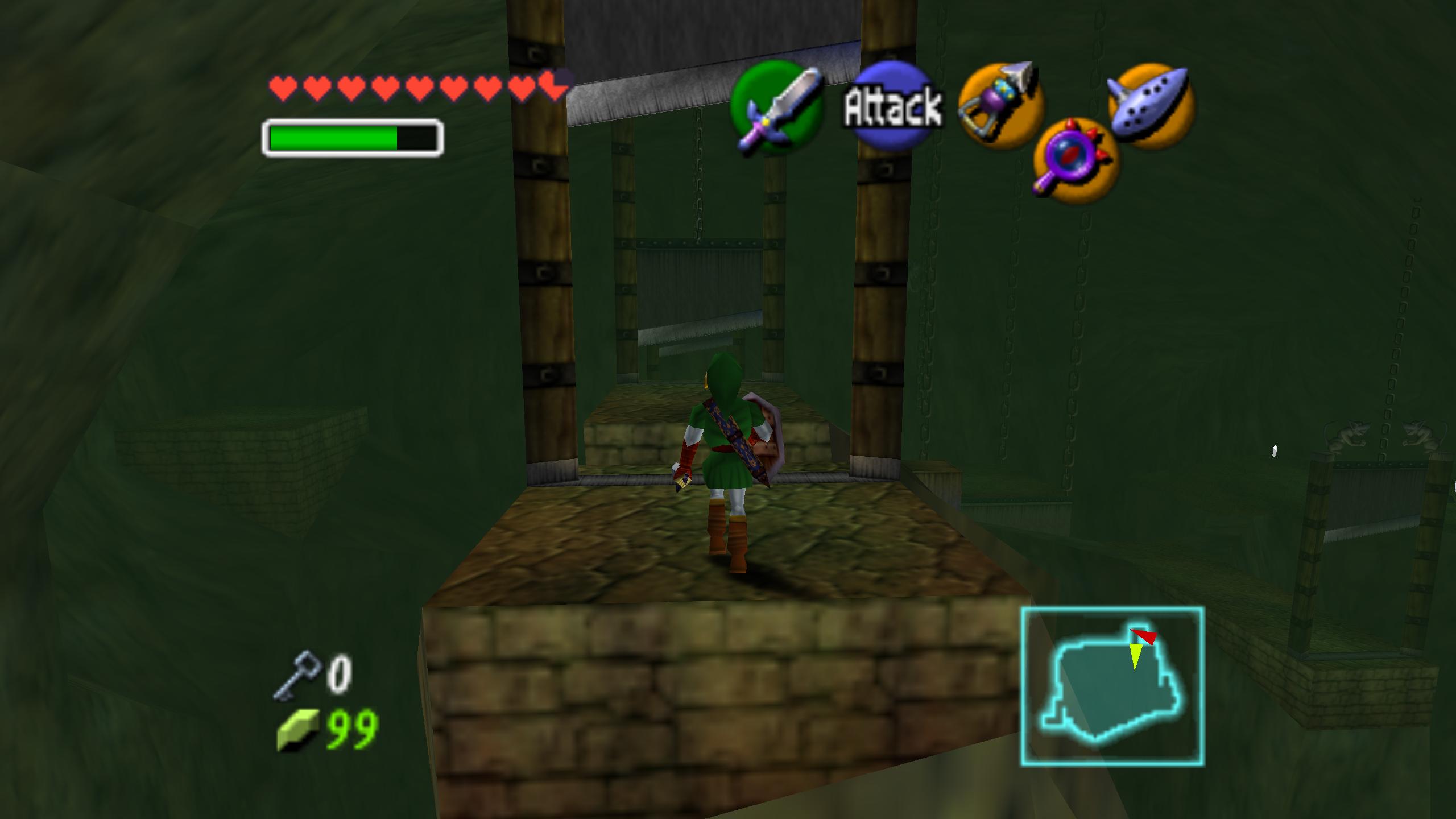 (I forget, was there another place in this game that had swinging axes? I feel like there was? If there was that place was more like Sen's Fortress to be fair. I'll give it that.) 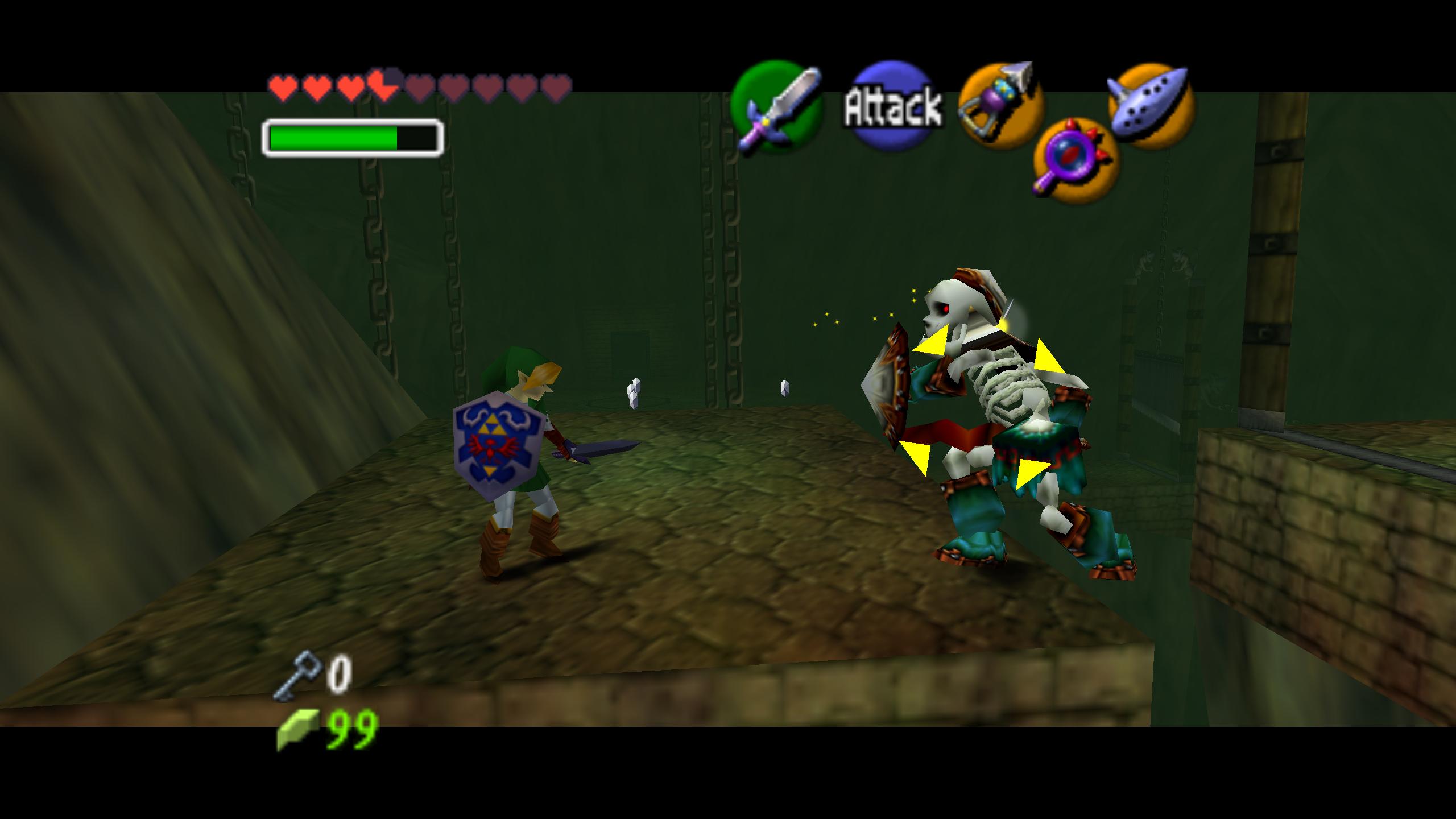 There was also this guy! Time to put those Sekiro skills to the test!

And that's when I called it for today! I thought I was making really speedy progress through this temple, but looking at the map seems like there's still some ways to go. Hopefully we can do it next time!

And actually learn something about Hyrule's bloody history! (If the game does not deliver on this, I will be very disappointed.)