Last time... I played Return of the Obra Dinn.
BUT, the time before that I played Ocarina of time and there we just cleared the ice cave and got some new kicks I can't wait to show around town, but first I gotta use them to get to the dreaded, the feared, the terrible... 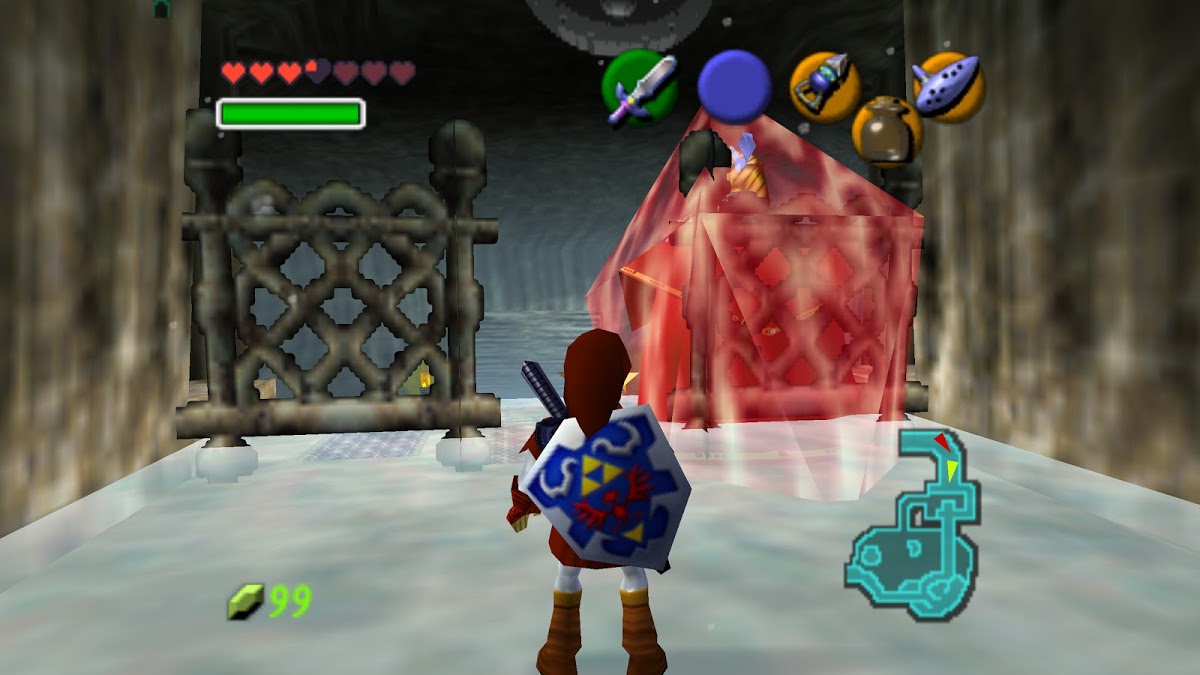 Oh, right, the King was in one of those crystals. I could free with the blue fire. I don't have any of left...
Dammit.

Back in the cave, through the whole thing, out to one of the chambers, grab some fire, run back again, and pour fire on him. 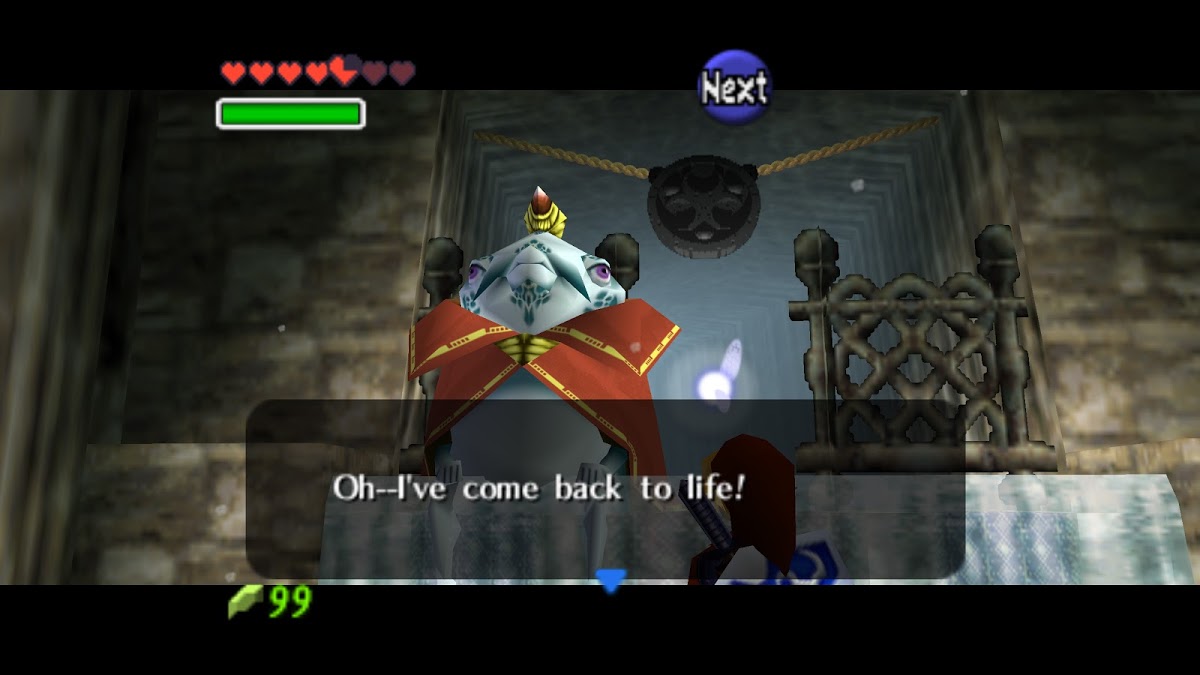 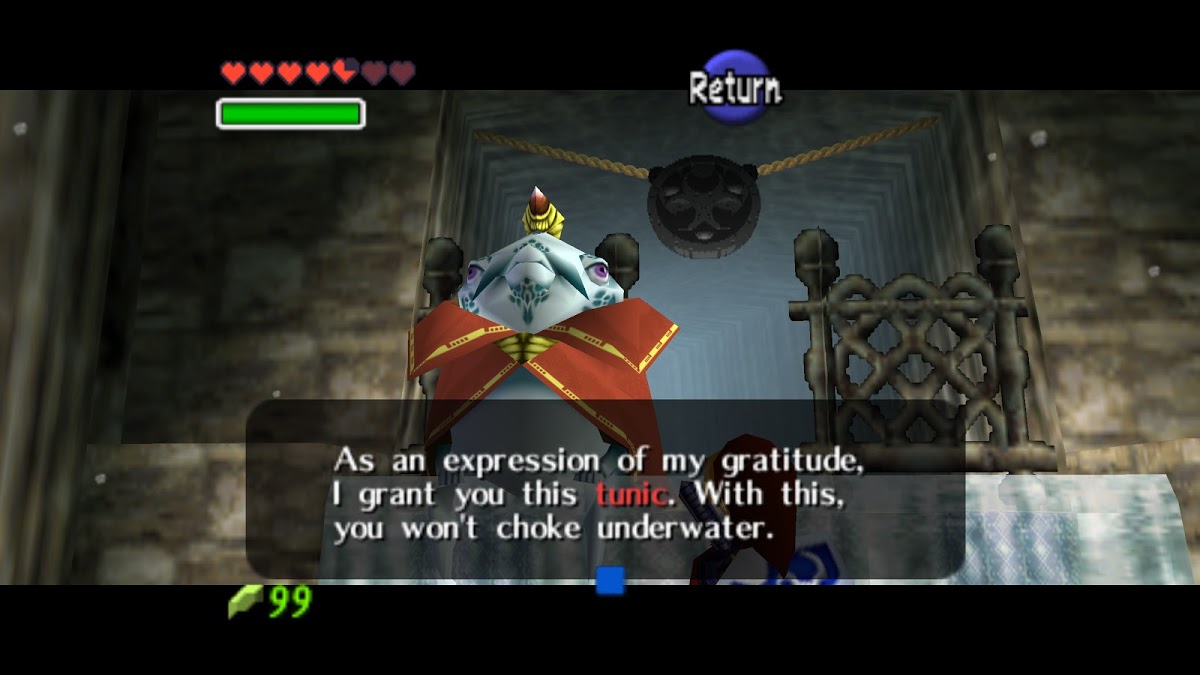 Oh, why thank you. Much appreciated. (I was briefly wondering if I needed this and how I got it, but had forgotten about it again, so I'm glad the game just hands this one to me.)
So, I think, time to head out to the cavern lake and hit the shortcut to the big lake-- 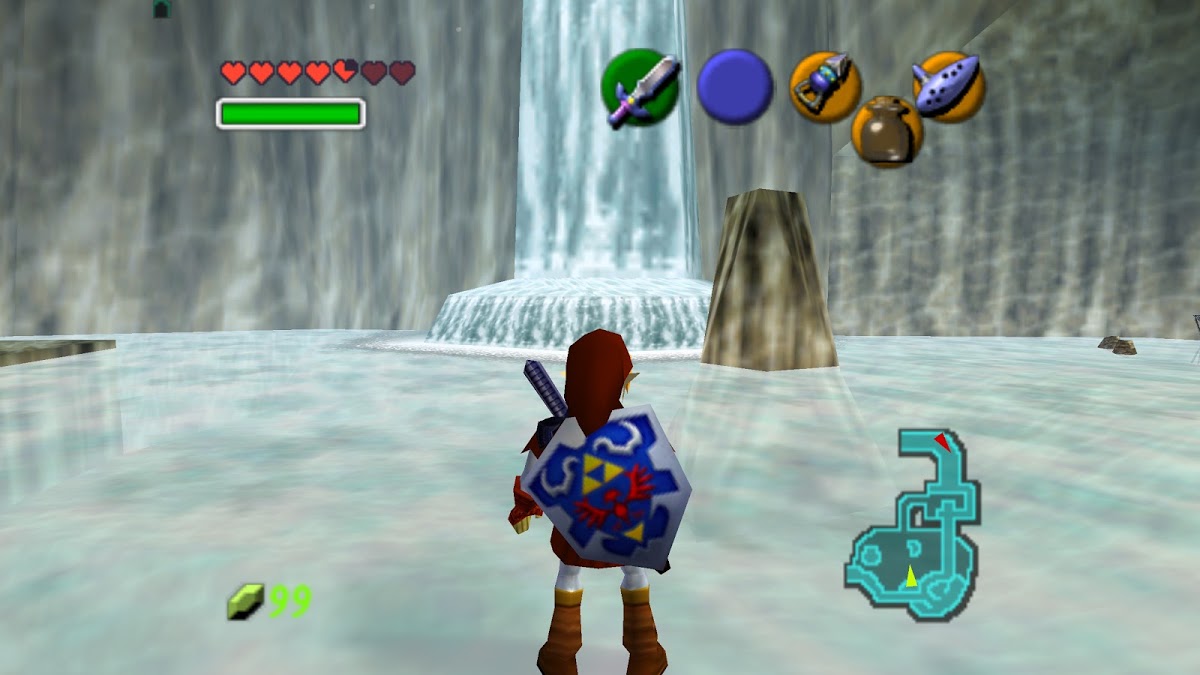 Time to run, I guess! 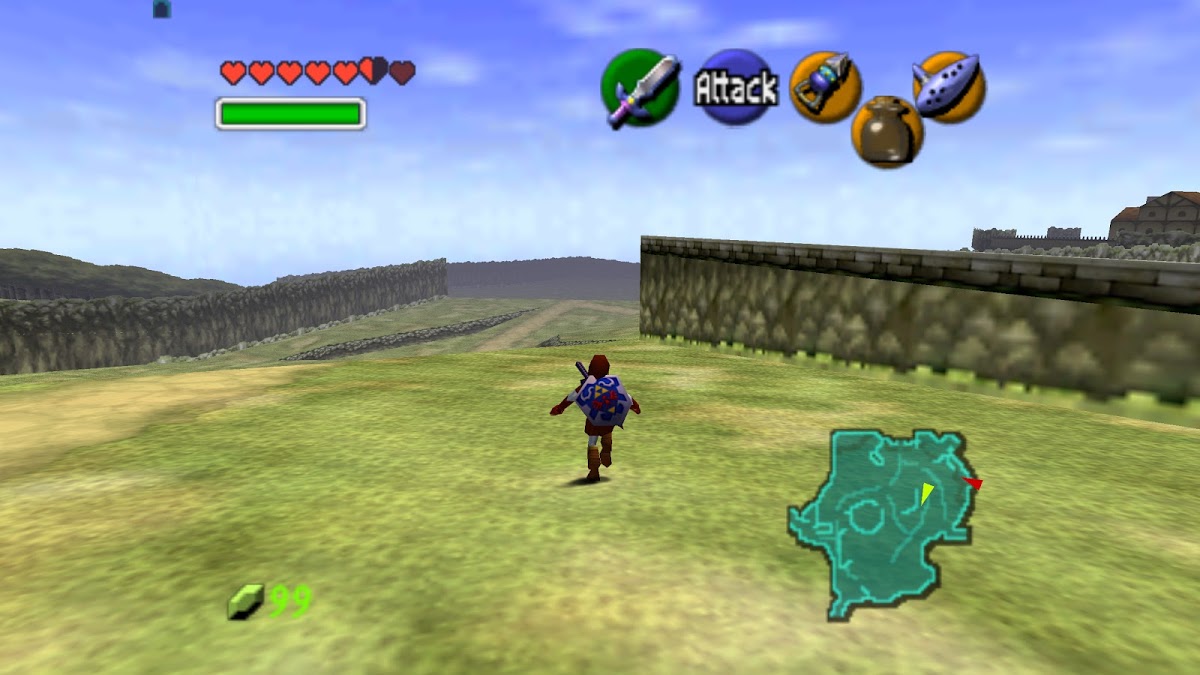 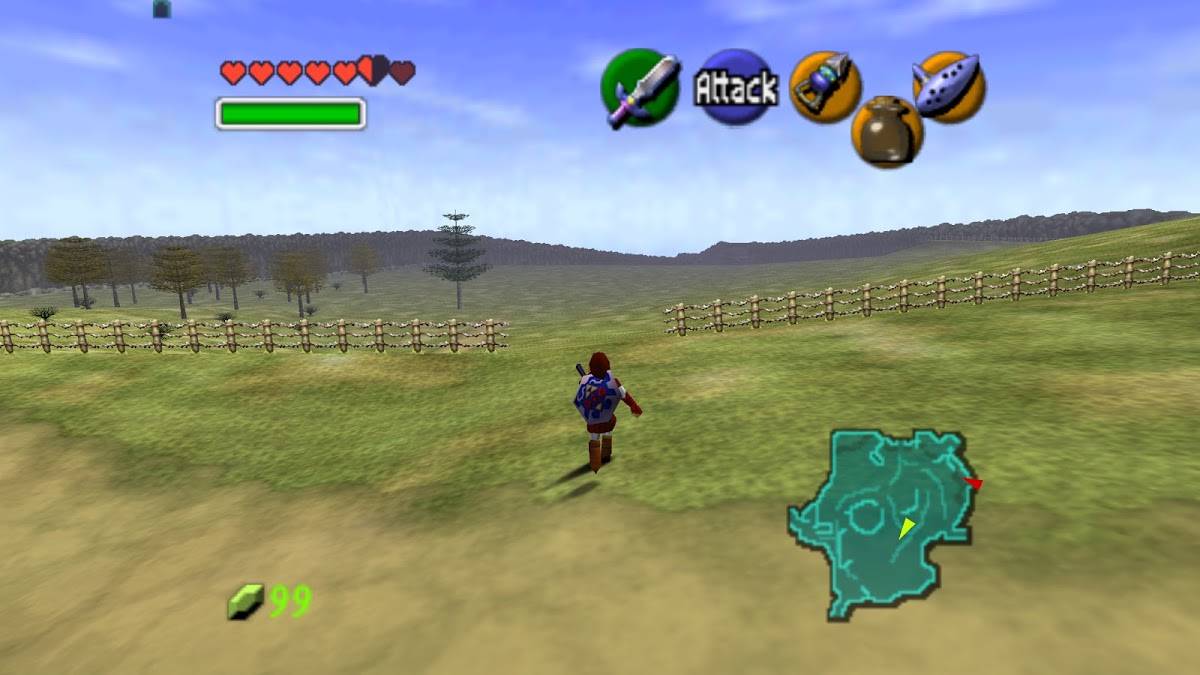 Is it just me or does that fence look like spines? 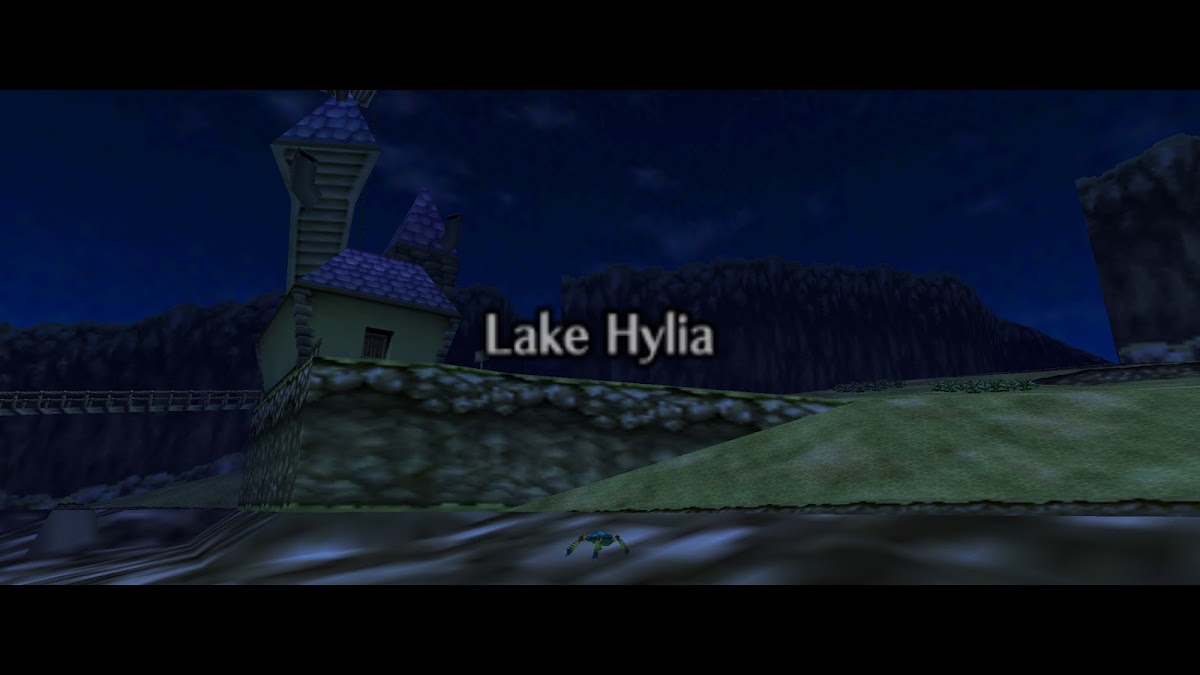 *And he ran all day and night*

When I got there I went in briefly to see what the laboratory-man had to say but he didn't have anything interesting so I went out again.
And somehow it was already day. 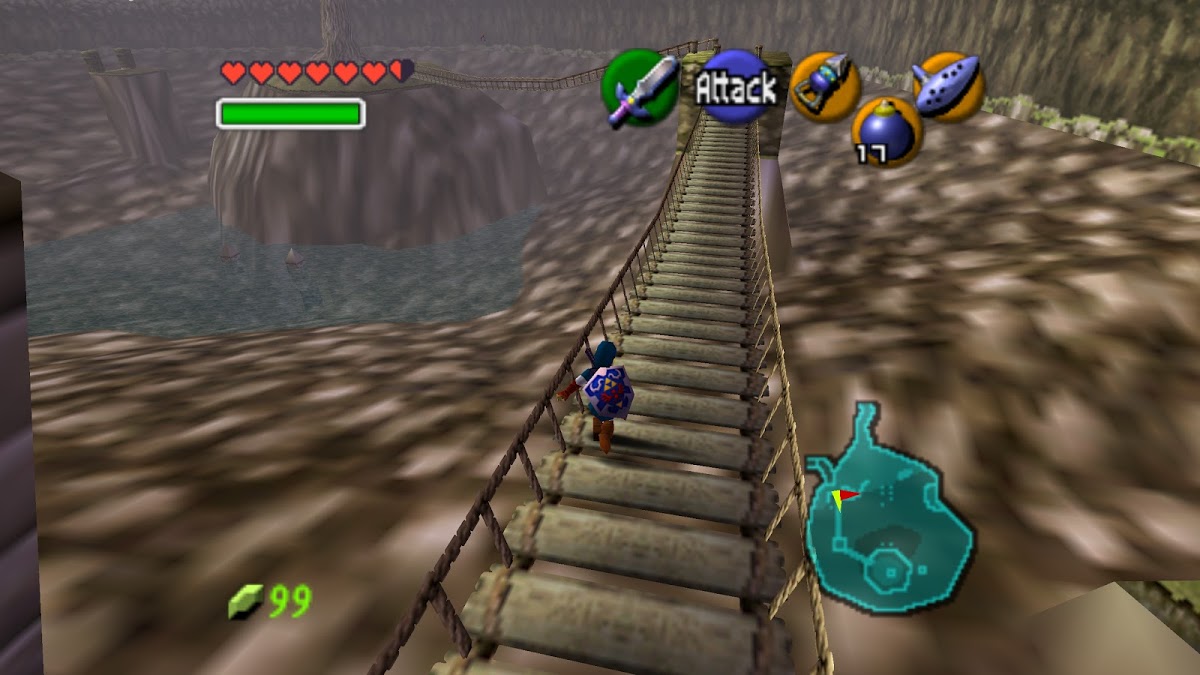 (Also, I changed to my new fancy blue clothes. Red's so last temple.)

And oh damn, the lake's almost dried out.
But before I head down, I check the islands that are now pillars and spot the big temple symbol on the ground. 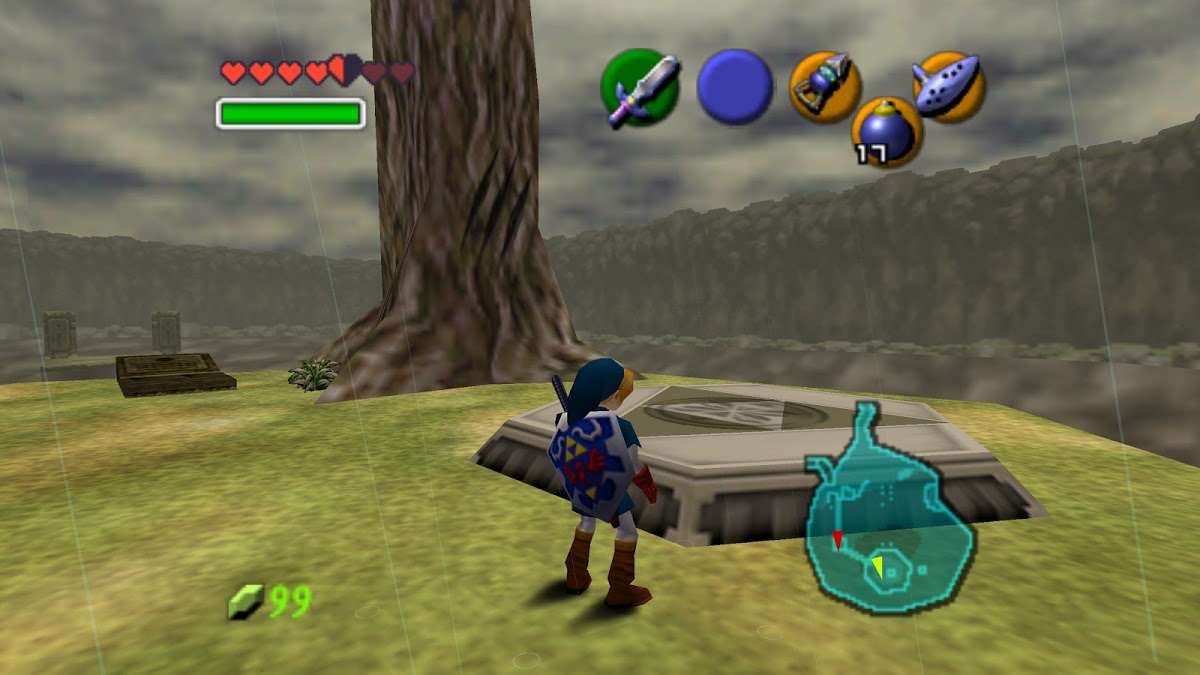 Which reminds me, that Sheik taught me a song last time. To get to this exact point. And could've skipped the running. Well, whoops. 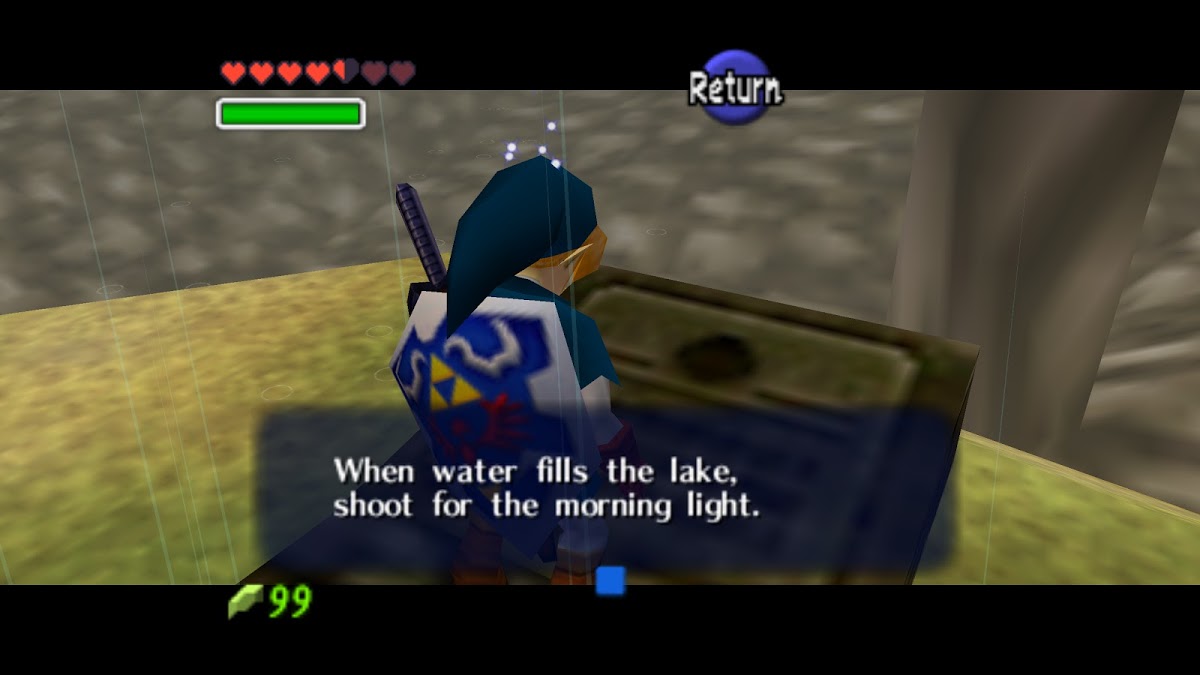 Hmm... that probably means something.

Time to get down to the temple. But the entrance is below water, and too far down to dive there. Sooo, let's see. 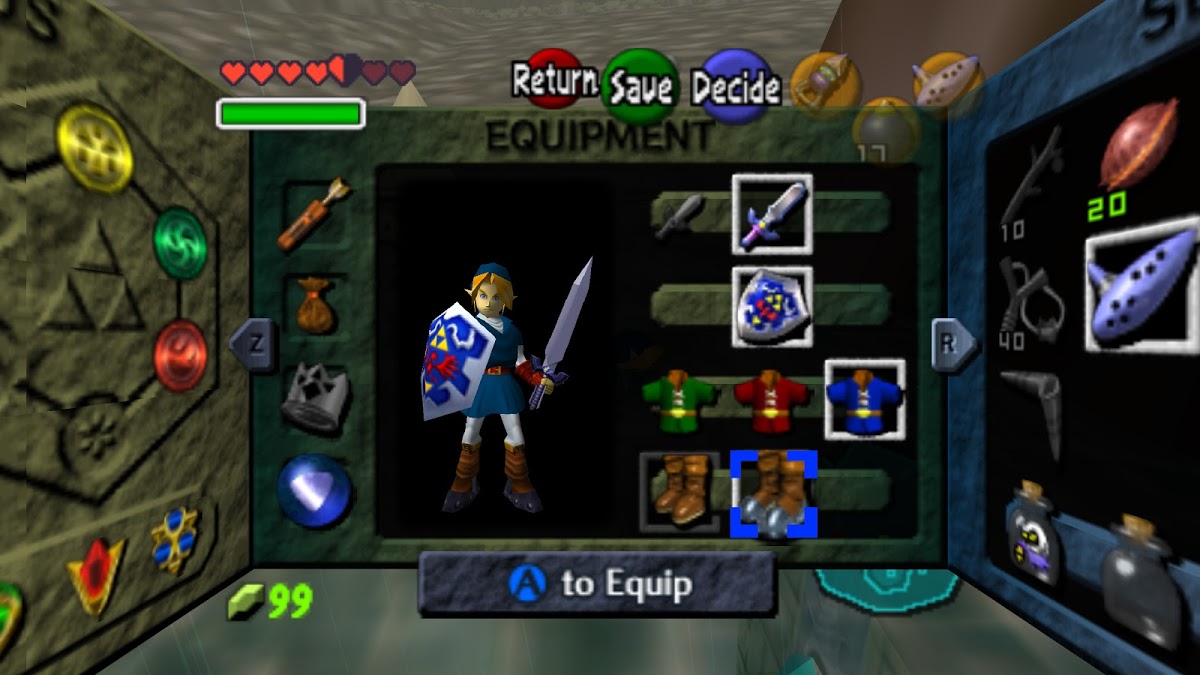 Menu, scroll to Inventory screen, go down to the boots. All right, lookin' dapper.

Nice. We got to the door. It's locked. There's a shootable thing above it. I should it and go in. And what's the first thing I see? 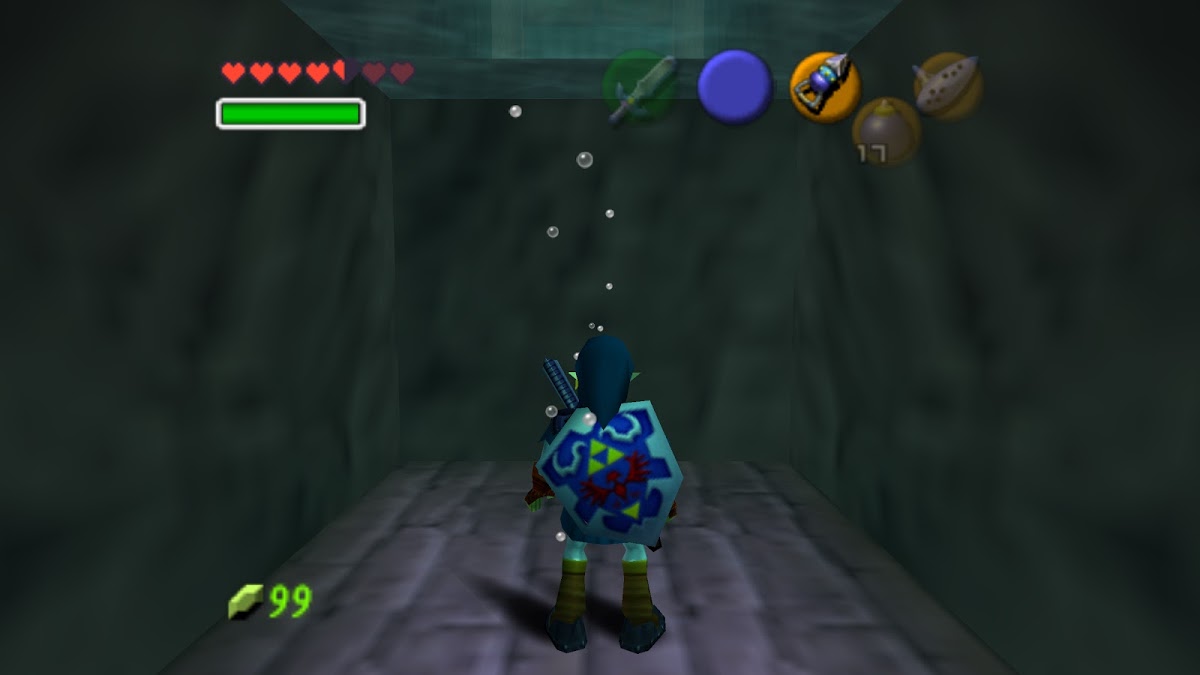 A too high ledge.

Soooo, back into the inventory, unequip the boots and there we go, float slowly up to the surface and see what we're made of: 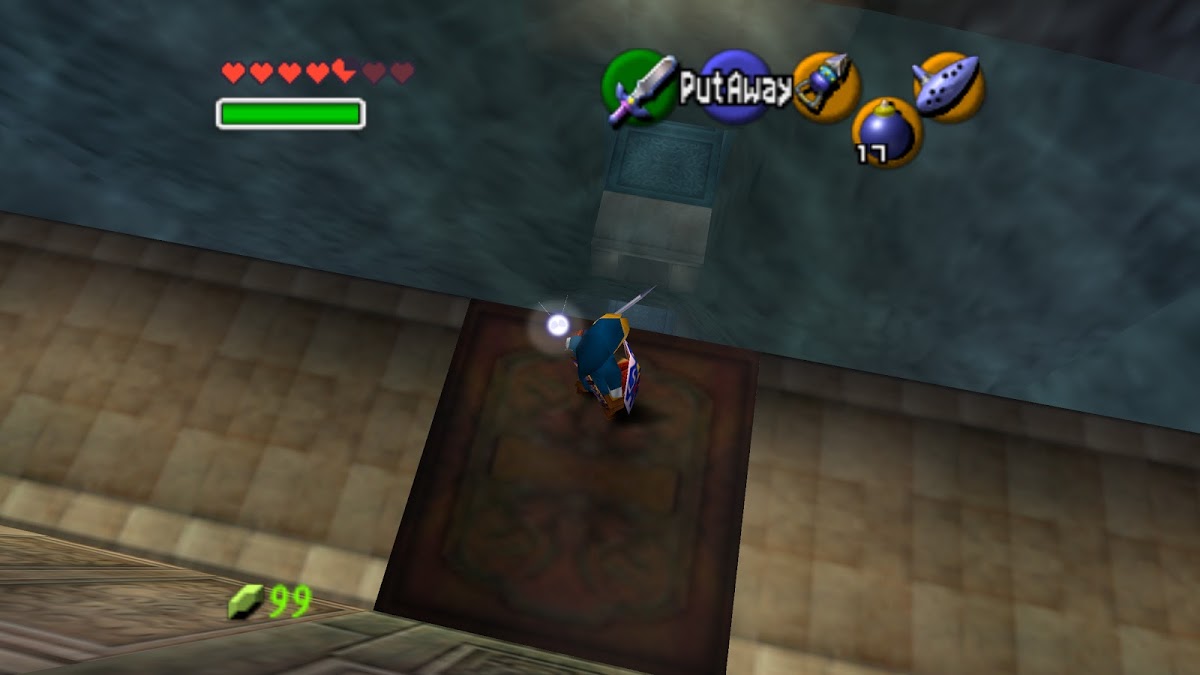 Uhh ok. So that's a bit hard to see in the screenshot, but the first room is this big square temple room with a giant pillar-structure in the middle, flooded in water up to the level I am at, but with at least two more levels underneath. So, this is going to be a lot of water-stuff. 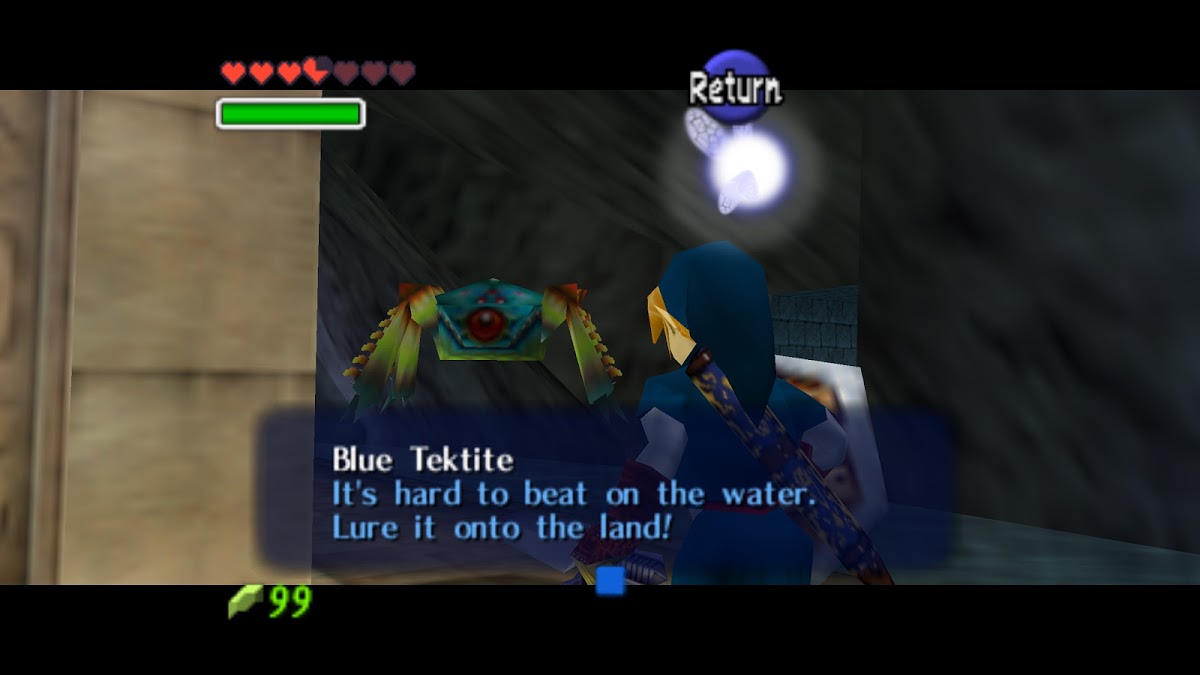 I run around until I find the only open door on this level, head in and find that it's a hole with water in it. So I equip the boots, go down, and there's some underwater hallways, and ultimately... a dead end.
Nice.

Back up again (take off the boots), there's no way for me to go but down in the big room. So I think, instead of going all the way down first, I should head to the mid-level and see if I can do anything there. So 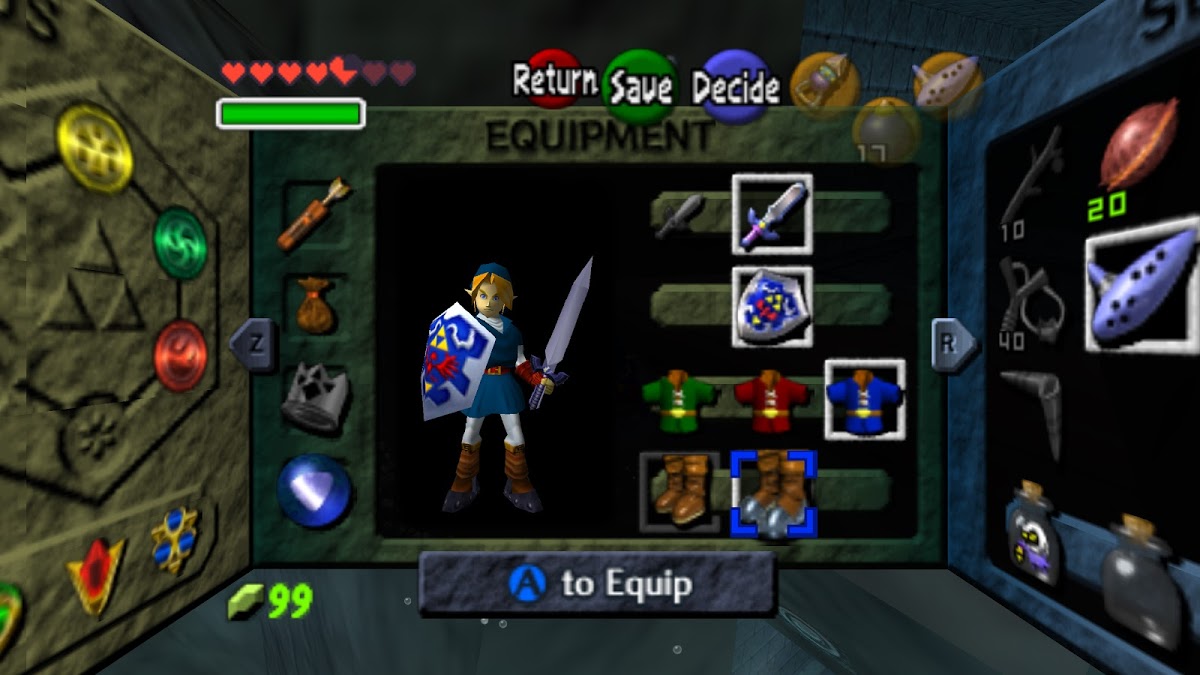 This image is for emphasis. It is not the same as the previous one.

Soo, now I think I'm beginning to get part of why people don't like the water temple! Having to enter the inventory, scroll to the boots, unequip them, and unload the menus, to then float slowly up and down, every time you want to get anywhere... Yeah, can see how this'll get tiring. 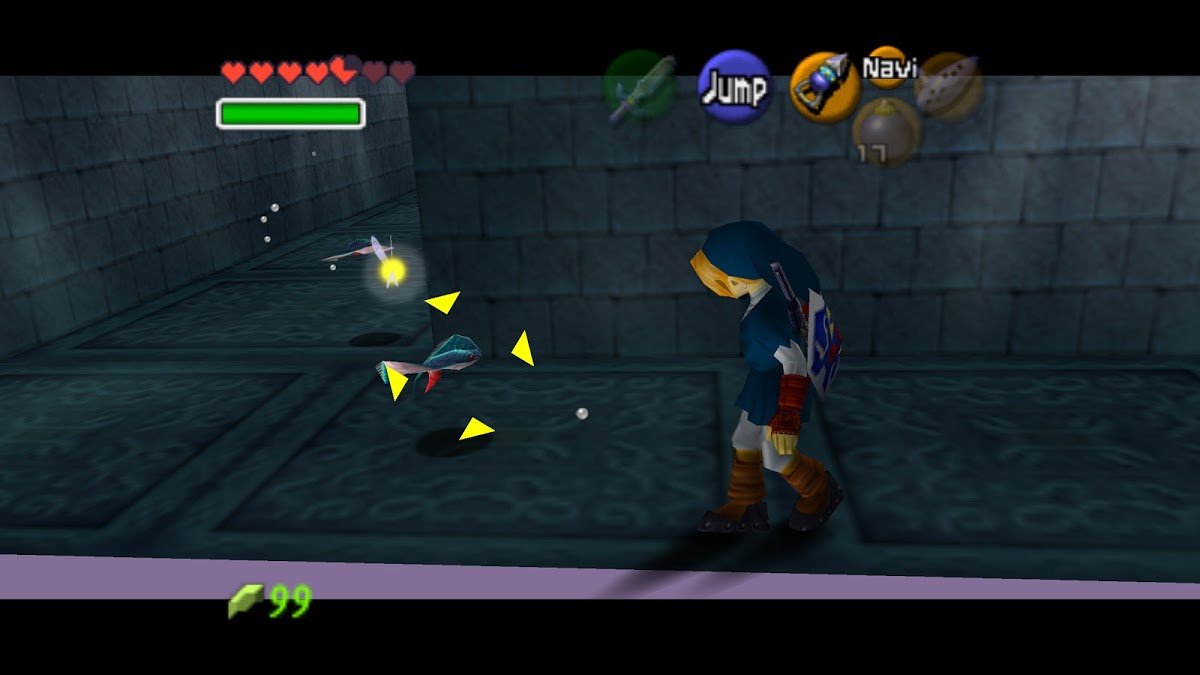 Which is what tells me I can't use my sword underwater. I can, though, use my grappling hook. (I can probably also use the bow, but I don't have that equipped. And I've learned that most things you can hit with the bow you can hit with the grapple. And it damages. And it doesn't use ammo. Sooo... I'm using that!)

And then there's some spikes I hope I don't have to land on and I can unequip-boot up again and get to the most teasing room of them all: 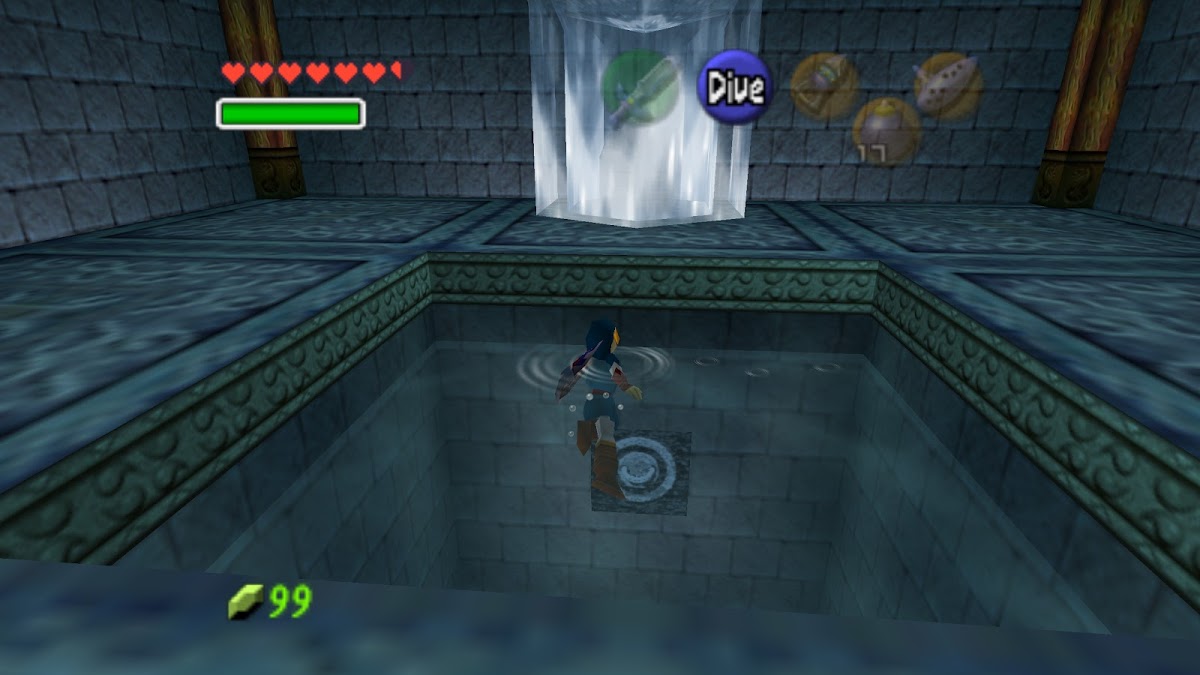 Yeah, that's a chest. And yep, I can't mantle that ledge. Thanks game.

All right, back out and down to the final level, I guess.
Before I jump, I see these spiky balls that slowly drift underwater towards me, but then they disappear. So I jump.

And then, as soon as I do, the spooky-battle-music starts, telling me what I feared.
I look around, see a spiky-ball behind me, and then just as I take the screenshot 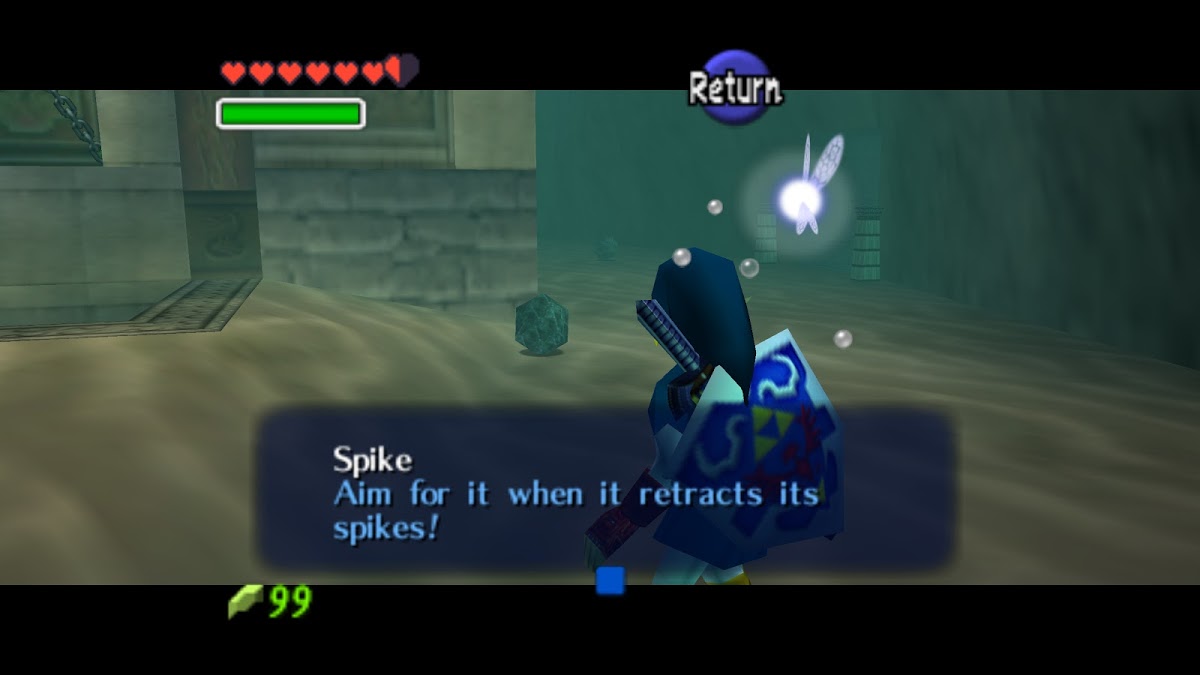 I spend some time fighting those, and learn that you can just shoot them to retract their spikes... And then shoot them again to kill them. So there's no real waiting involved. Which suits me!

I find the first open door and 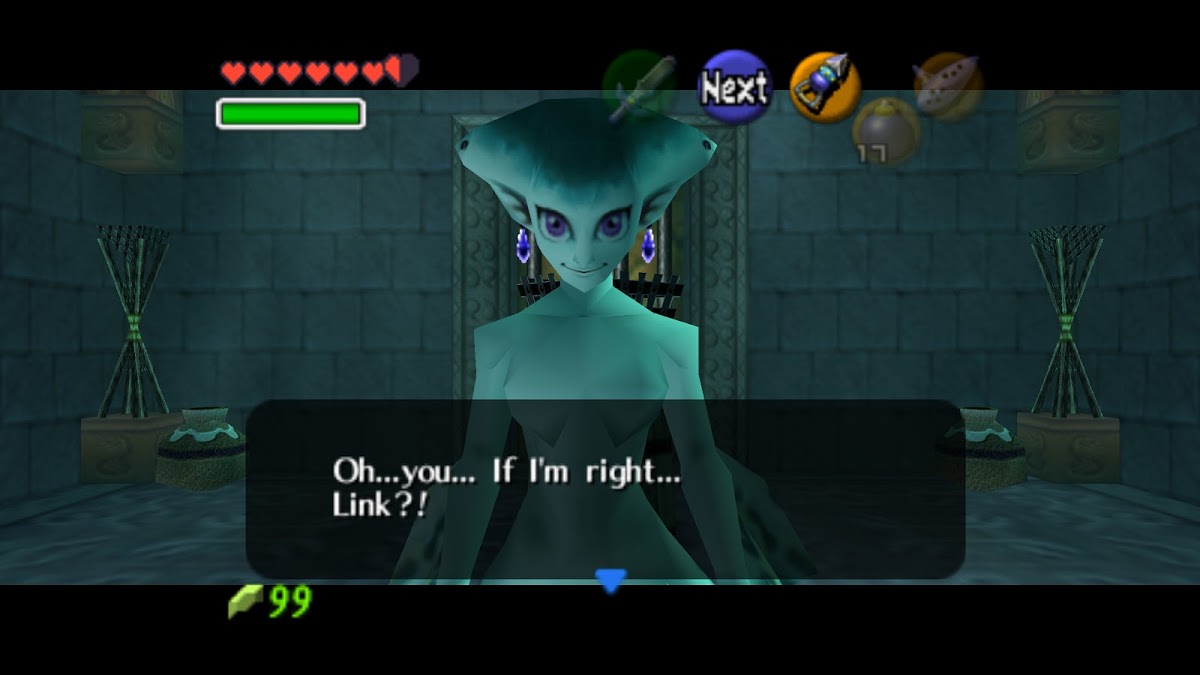 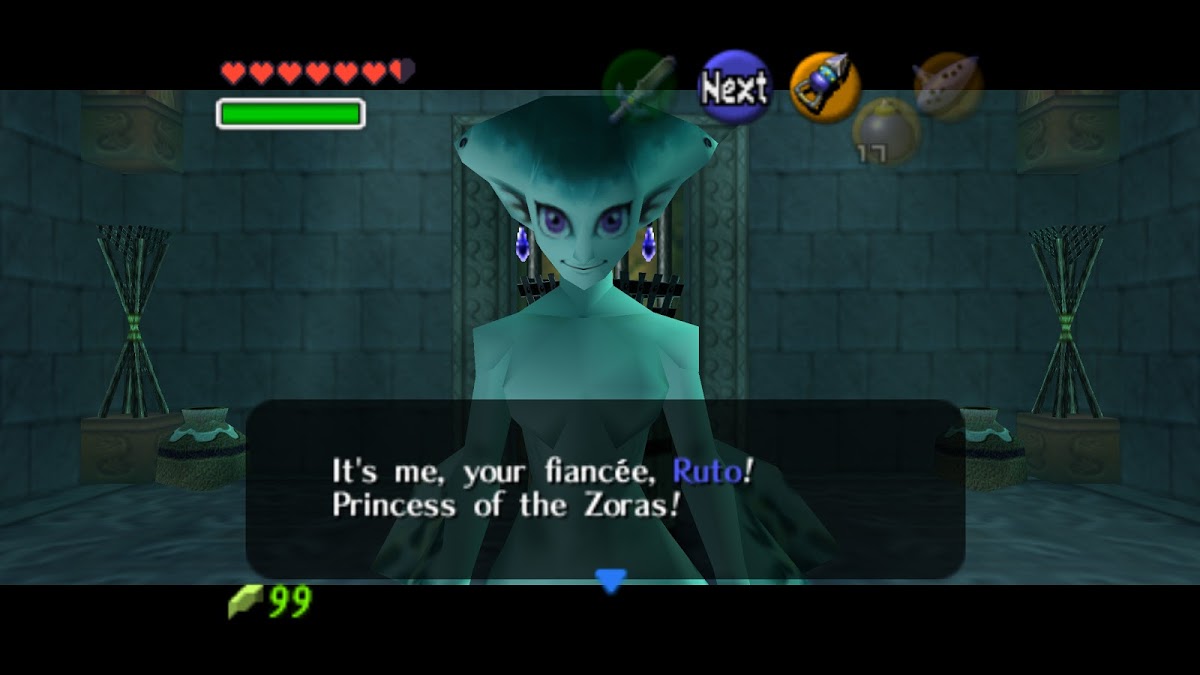 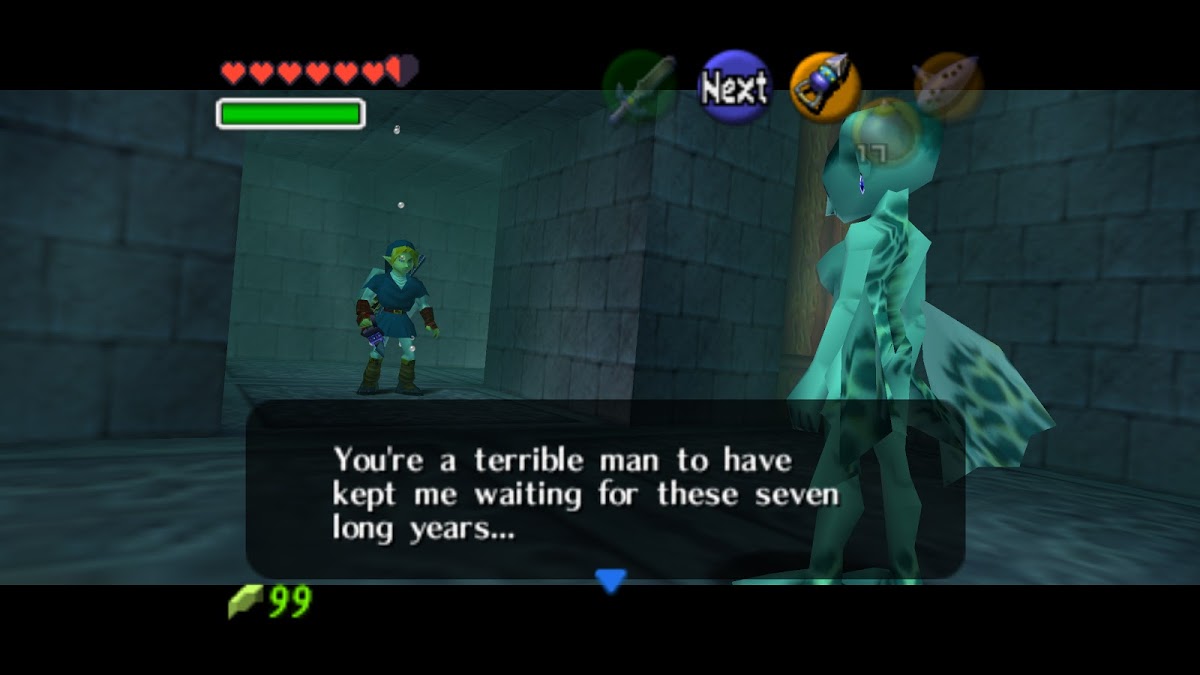 Yeah, maybe that should've told you something? (Get out! Run!) 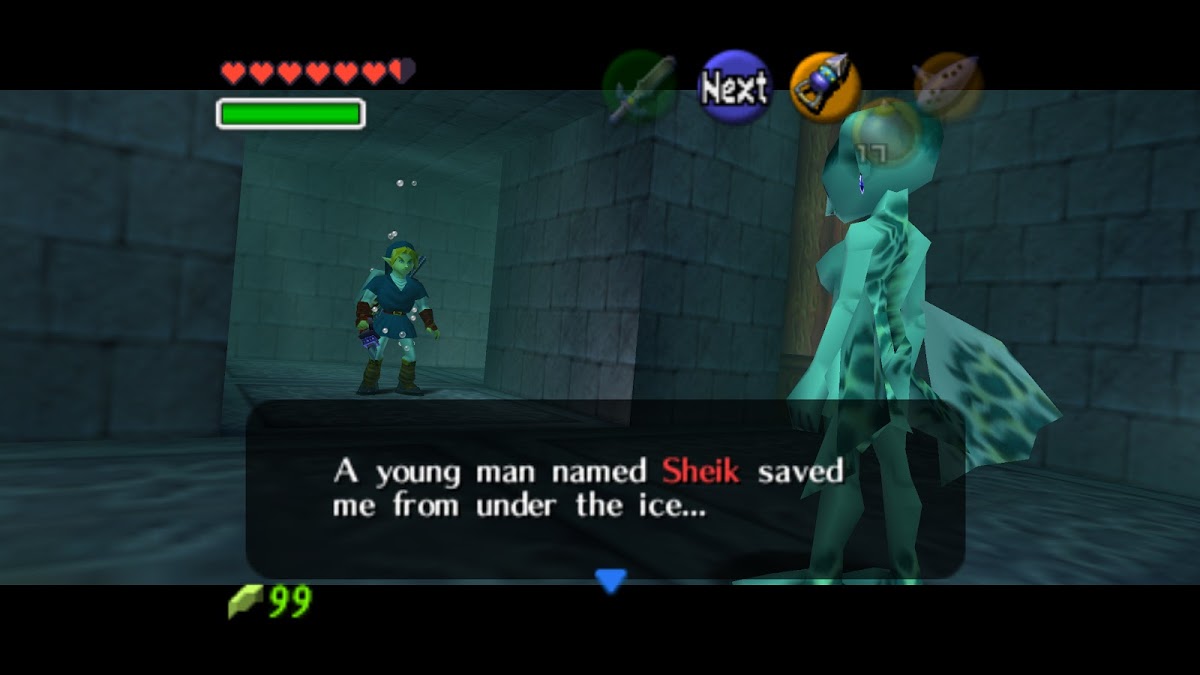 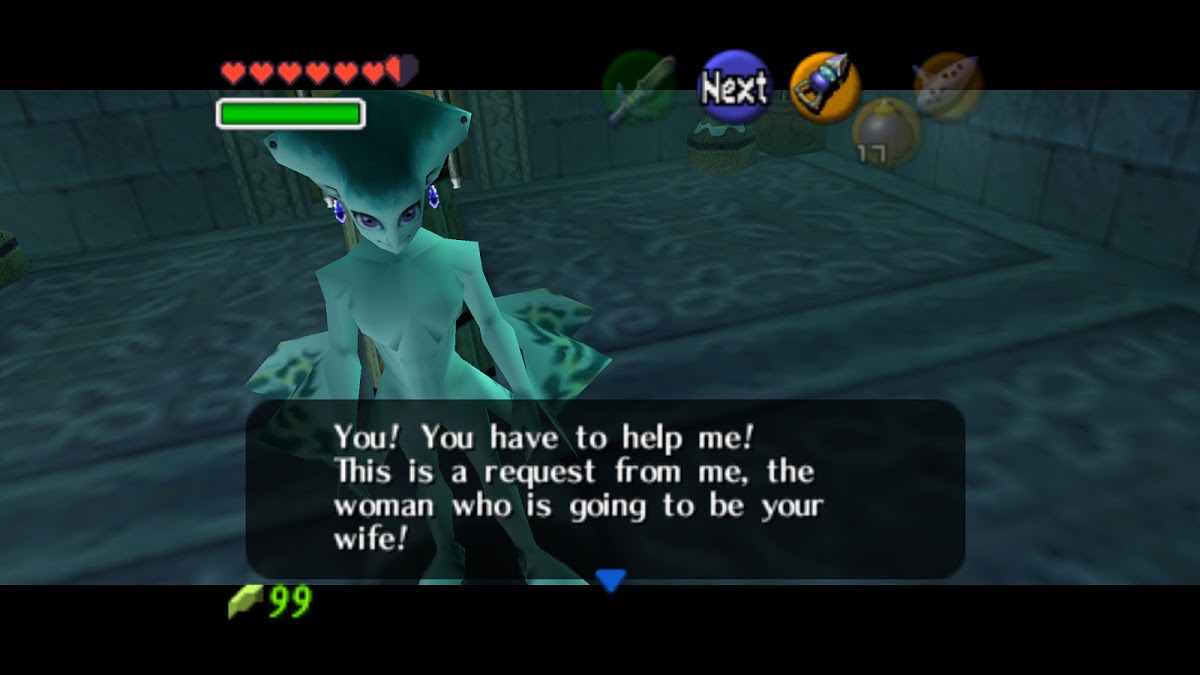 And then she asks me to kill the evil monster inside the temple. Which isn't really news, so I guess I can tag along for now. 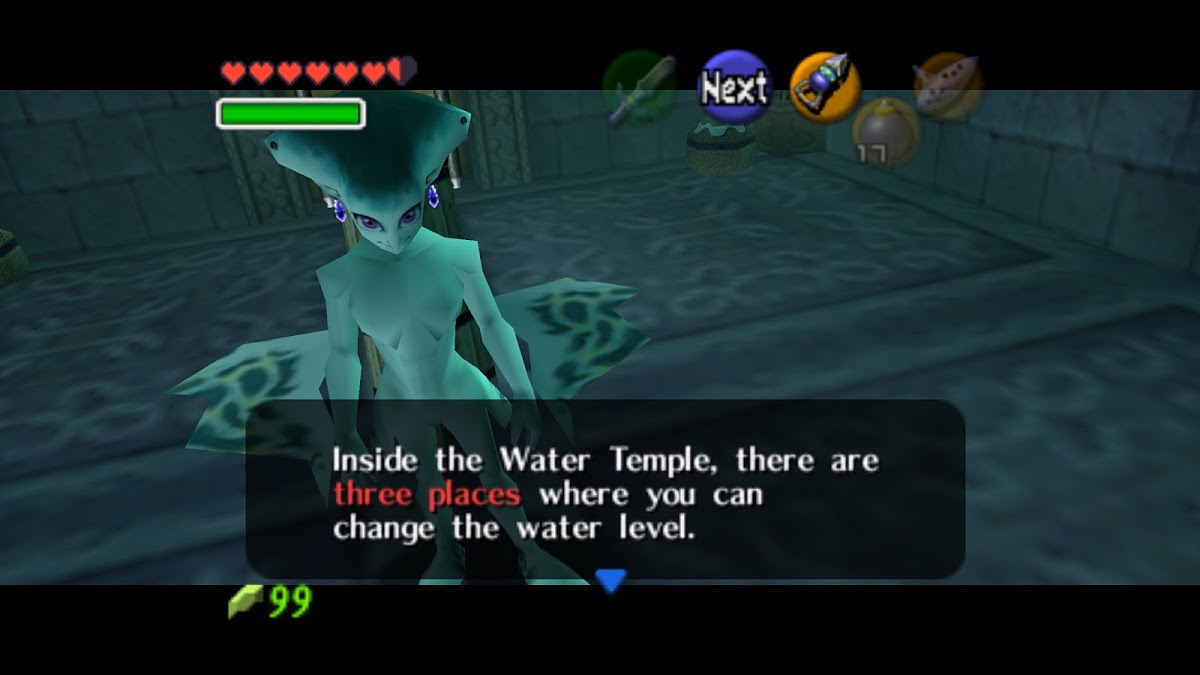 She tells me to follow her and floats upwards.


Which, again. Let me just iterate: She can swim. She's far better suited for underwater dealing than a Hyrulian kid who needs to wear iron boots to "dive". Why isn't she doing this? Ok, maybe she doesn't know how to fight the monster. But at least, open the door for me? Please?
But no, it's back in the inventory and take them boots off and float up. 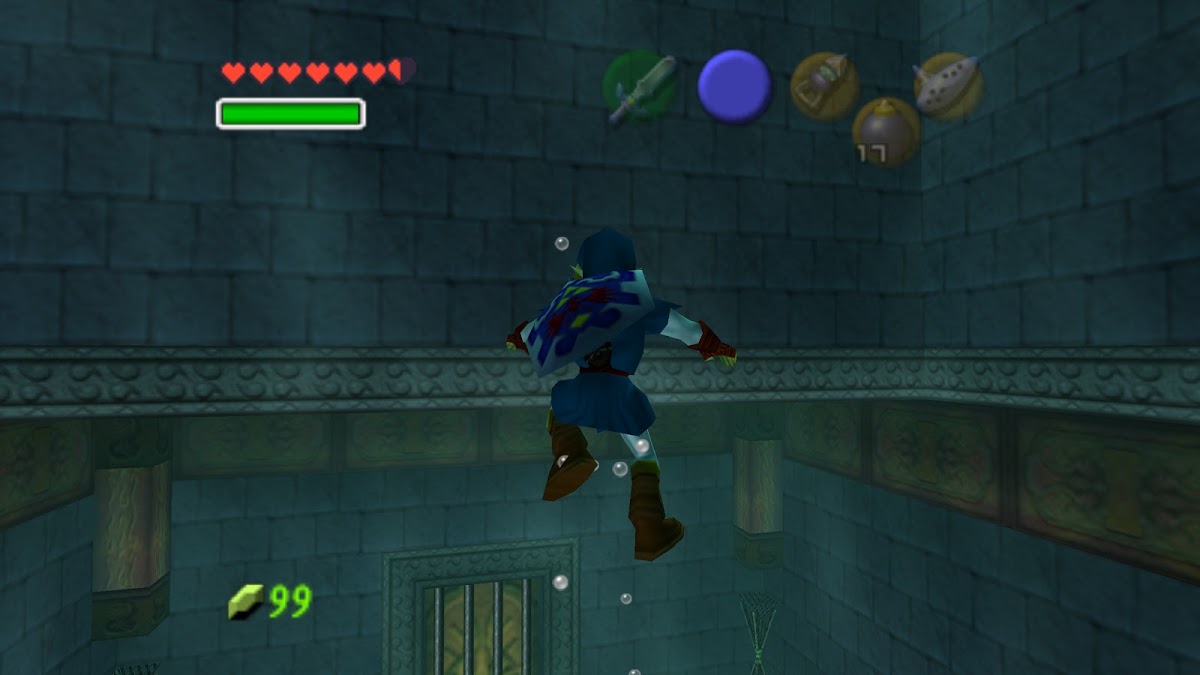 Link, by the way, looks like this when he floats up. And he does it slowly. 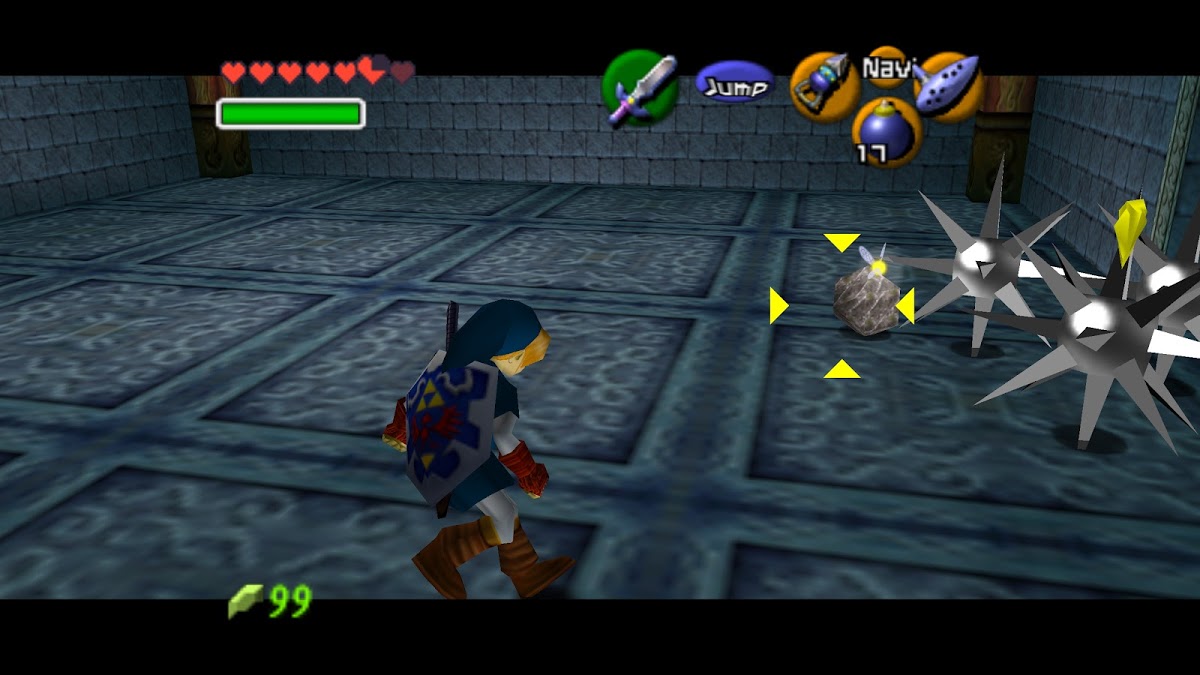 Uhh, Ruto? You there? I only see some spiky-balls. And then I kill them and get a dungeon map.
Hello? 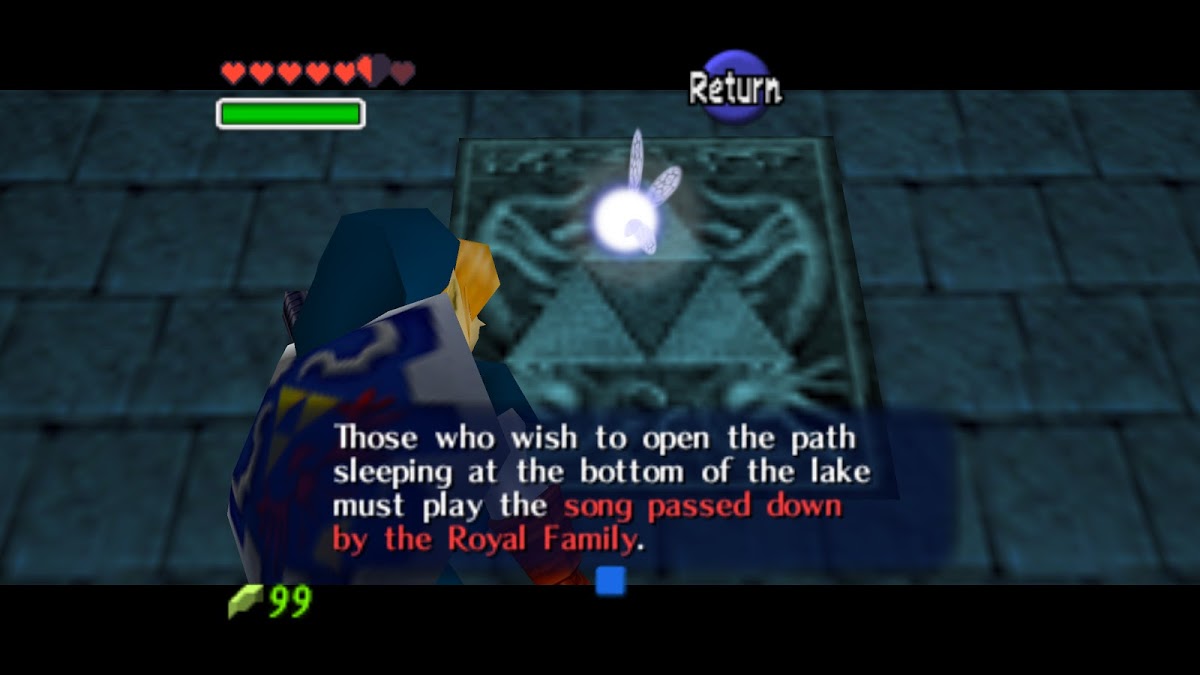 One more time, for good ol' sake. It's been a while:

When in doubt, play Z---
Let's just play it. I remember the notes by hand anyway at this point, see what it does. And guess what?
It lowers the water level.

Yeah. Zelda's Lullaby lowers the water level.
It really does do everything.

So now I can fall down, go out and be at the lowest level.
Still no Ruto. Strange. Maybe she camouflaged herself with a wall. Maybe she can teleport. Maybe she made a pact with a demon and now she's in the astral realm.
Maybe we'll find out next time.

For now, let's call it a night and say I now know what the water temple is all about. And looking at the map, looks like we'll be here a bit.
Woo, jeez. Ok. Settle in, this'll be a long'un.