(Normally I play Ocarina of Time every sunday, but today I'm going to interrupt our regularly scheduled programming with a brief look at Return of the Obra Dinn. Because, well, I really wanted to check this game out and this was a possibility for me to do so. So, sorry if you were expecting more Ocarina, it'll be back next week!
This is going to be a bit more just me talking about the opening of this game than the typical style, because I just want to talk about it, okay?
But, squeeee, this game's so good.)

Return of the Obra Dinn is the latest game by Lucas Pope, creator of Papers, Please, which is a game I adore and admire in no small amount, so I knew that I had to check out his next creation no matter what it was.
(By the way, I'll spoil only the very opening, which is treated as a tutorial. That means I'll solve the first couple murders (if even), but that's only about 45 minutes of play.)


And right from the very opening, you can tell this is made by the same guy, even though this game is a very different fare.
The opening menu drops you with a static screen and some blaring string stabs not unlike the horns from the Papers, Please theme. Good. Feeling right at home already.

But the similarities seem to end there, because this's got nothing to do with stamping anything in a dystopic society, but rather takes place in 1807 and the task is immediately established. The ship, "The Obra Dinn" was declared missing in 1802 and now, five years later, it appears drifting into port at Falmouth. An insurance investigator is dispatched to find out what happens. That insurance investigator is me. 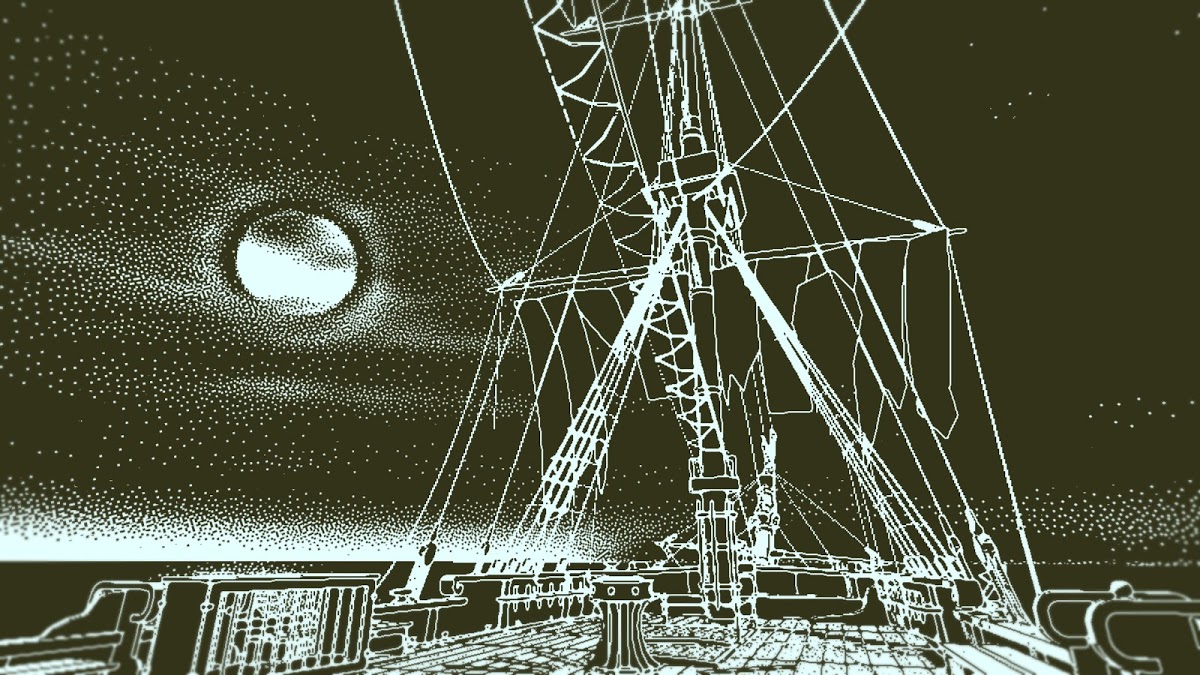 I arrive at the boat, however, and very quickly, we realize that things haven't gone well on the good ship. A skeleton corpse lies on deck, right next to the door to the captains quarters. 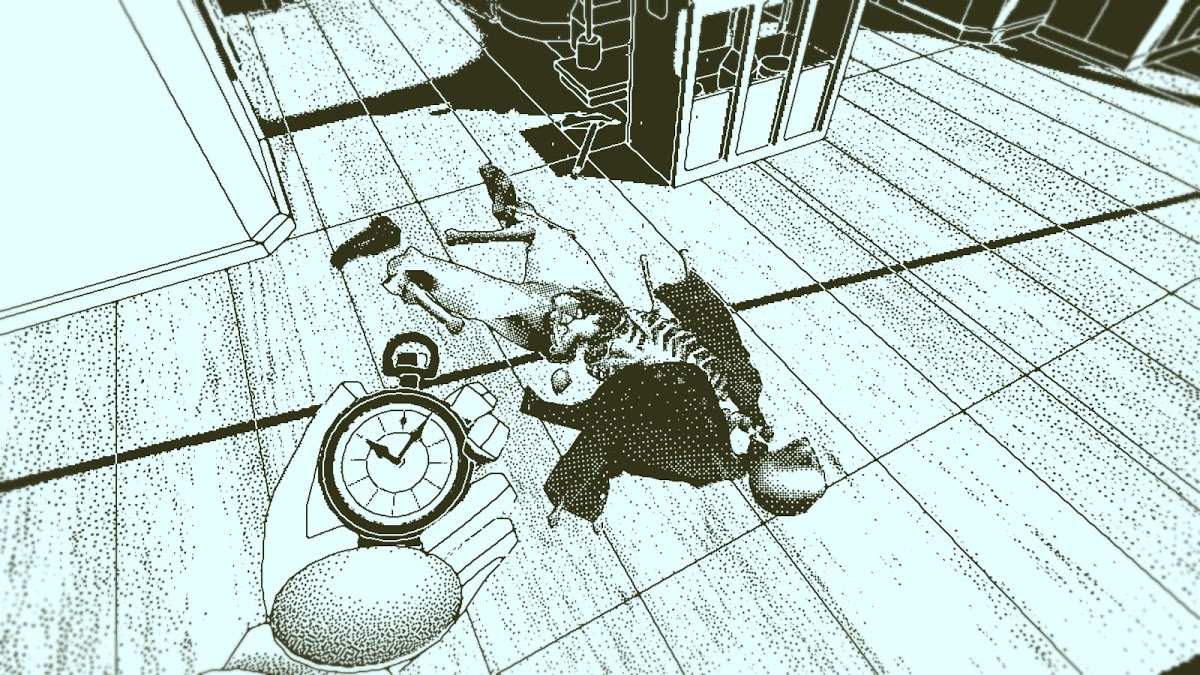 This poor fella's been dead a while.

The man who sailed me out there hollers at me that I should come and get my things, so I do, and see what my tools for the job are.
1. A ledger of all information pertaining to the ship, as well as a lot of unfilled information about what happened.
2. A watch, with a skull on it (pictured. The skull is on the outside)

This watch is key. I know what this is already because of the very early demo Lucas Pope released many years ago now, but for your sake, let me explain what I see.
I take the watch up to the corpse, click a button on the watch, and it spins and my vision fades to black.
I hear noises. Some people are shouting at the captain. Tell him to come out.
He shouts back. A door breaks open.
Gunshot.
Boom. My vision startles up again, and a man appears in front of me, shooting a gun.
Only, the shot doesn't move. He doesn't move. I look around and see that the one he shot wasn't me but one standing in the spot I stood--in the spot where the corpse was.

I'm seeing the moment this man got murdered, frozen in time. 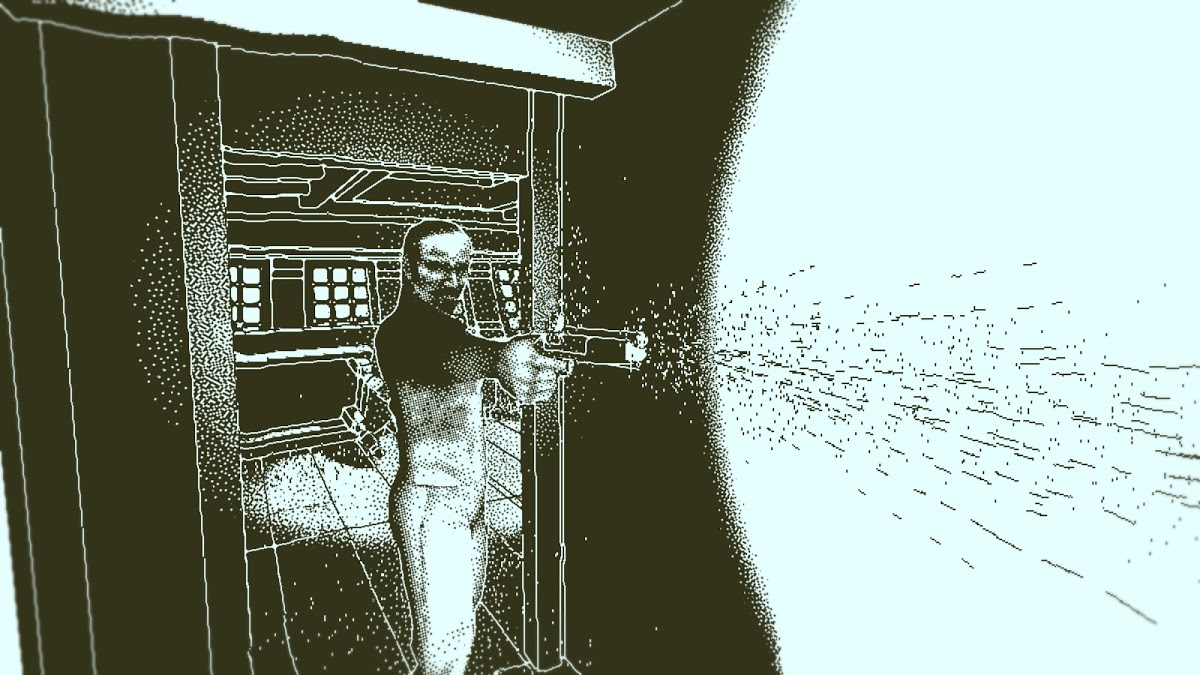 This here's the crux of the game, but the true meat of it comes right after.
When the game's played out it's dramatic cue (which works really well), it pulls up the ledger for me and begins filling out one of the chapters (it starts, mysteriously, at "The End").
Information pops in about what I just saw, but no details are specific. It only says "This unknown soul" "died" and we don't know by whom.
That's my job. 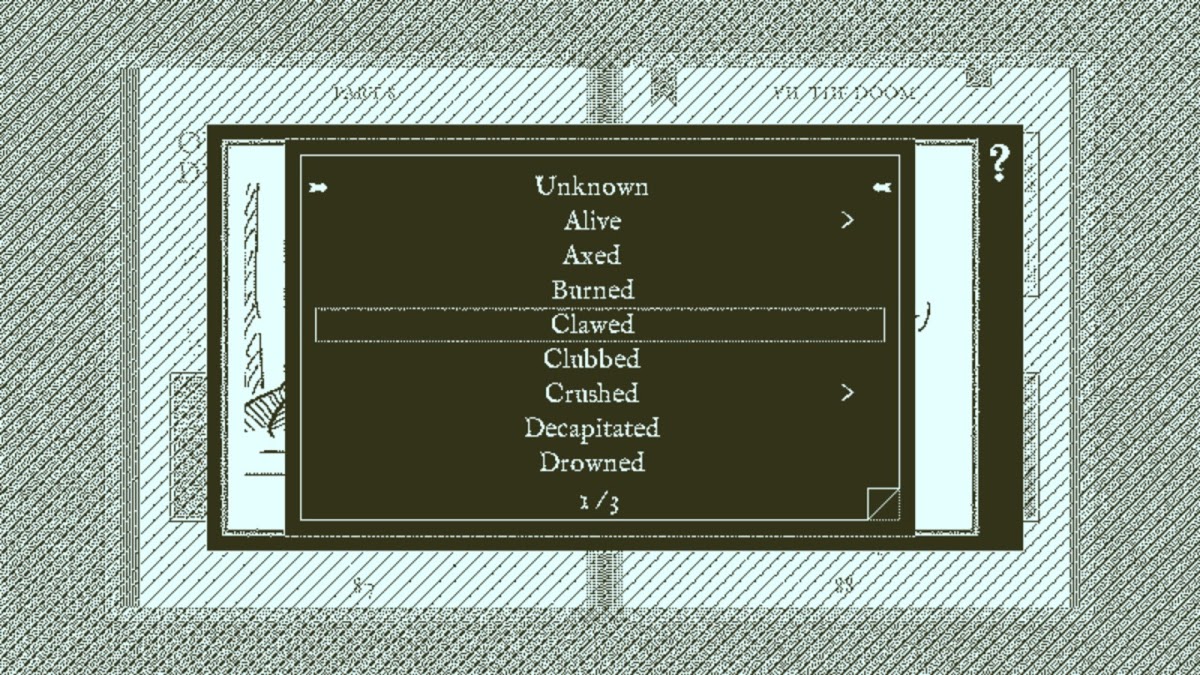 I can click on each of those entries and fill in information.
Who was he? That's still unknown for now, the game is kind enough to tell me. But I know how he died. He was shot. And I know who shot him: The captain. Since this man was shouting at the captain and he bursted out of the captain's quarters, it seems only logical. 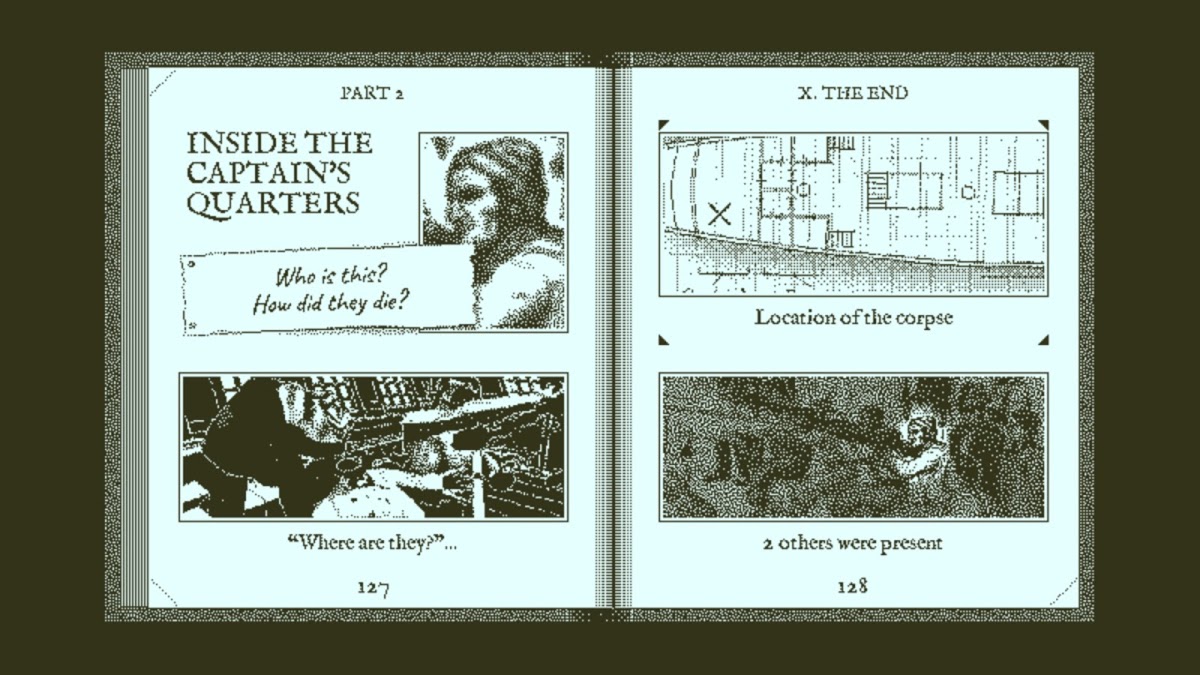 Here's images of the next murder, because I forgot to take pictures of the first. 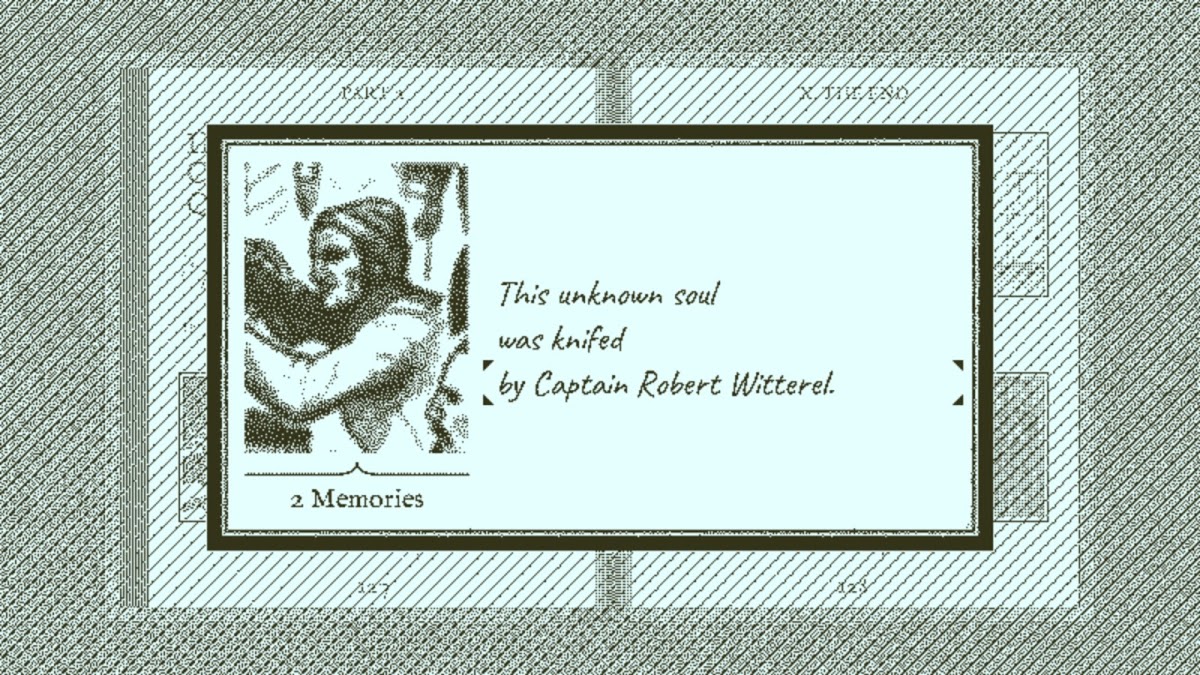 Each of those lines is clickable.

Because it turns out, the captain's time in the spotlight was not done there.

I go out of the frozen murder, back on the ship and enter the captain's quarters, where two more skeletons lie.
Let's get to work. 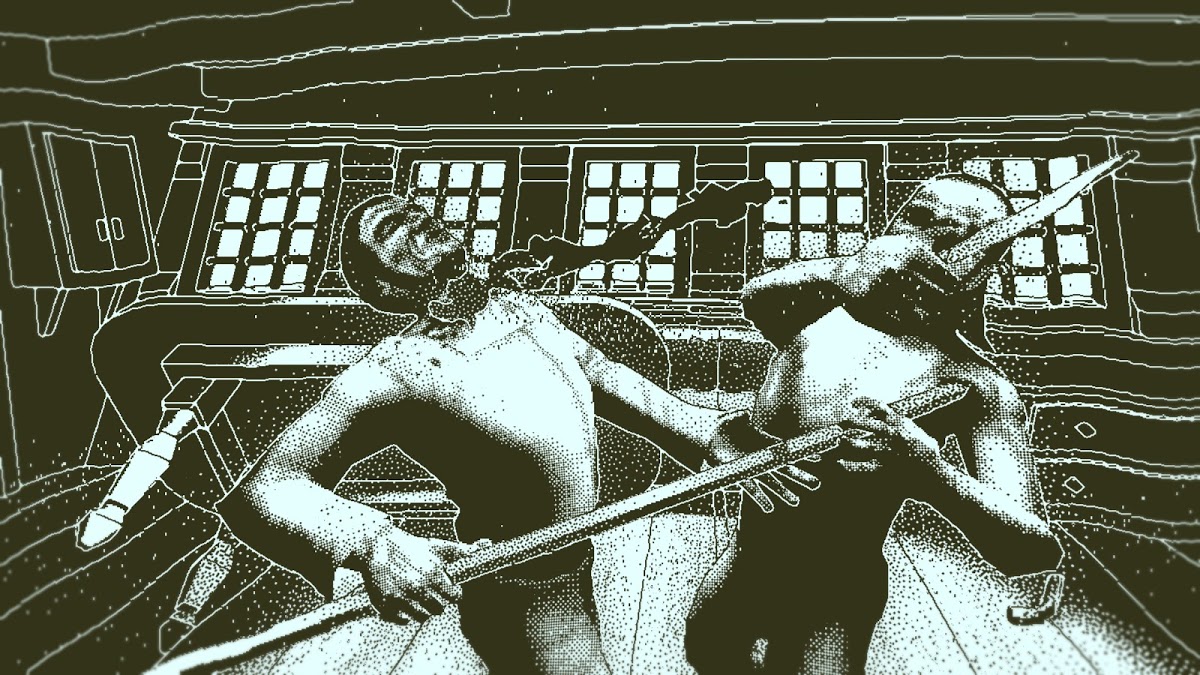 This guy: Knifed, by the captain as well. (This is the info that's depicted above.) 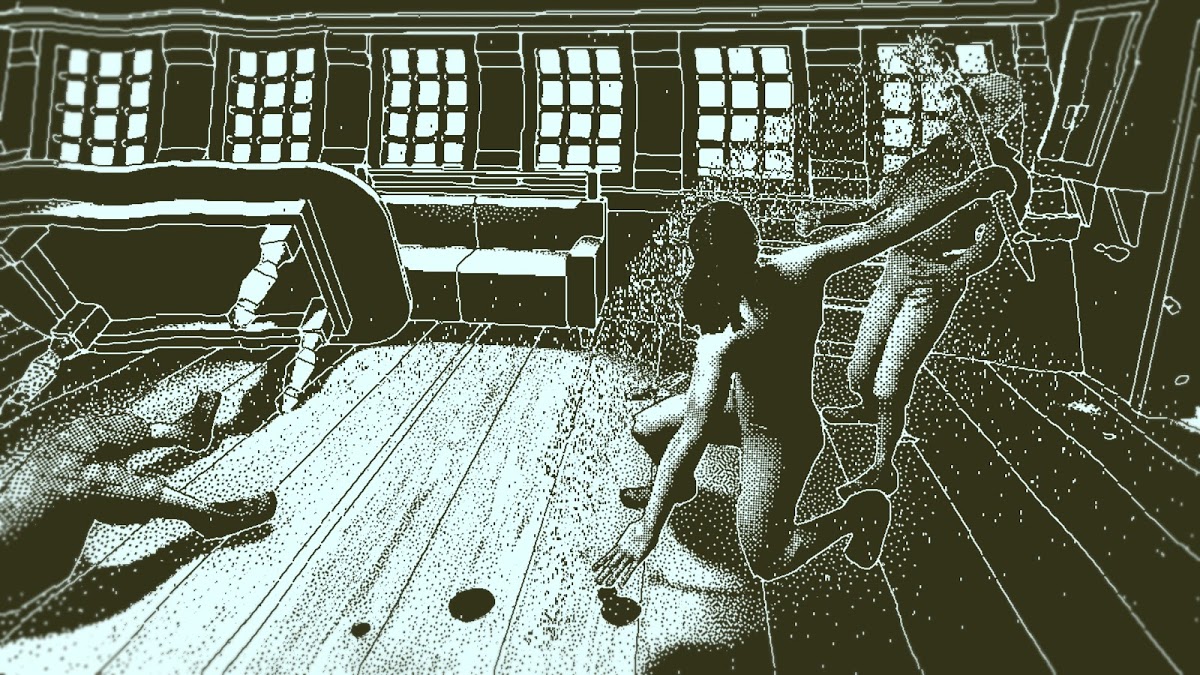 This guy: Clubbed, by the captain. The Cap's a busy man.

However, no closer to knowing who any of them are yet. So far, three people dead, all without any names.
That comes with the next clue.
In the room next to all of this is a person in a bed. 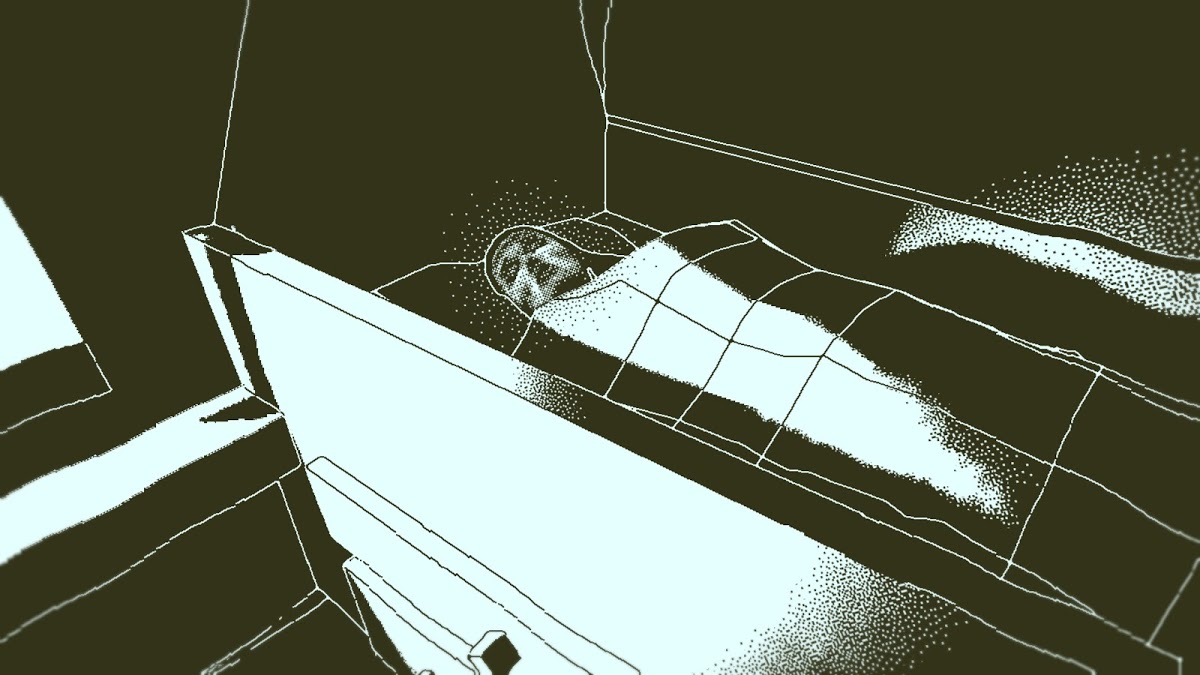 In the frozen time, she looks like she could be sleeping. But with all the noise just in the next room, that seems unlikely. So, guess we should find out how she died?

But no, back in present time I am stopped by an intriguing detail: Another corpse in the doorway, before her bed. 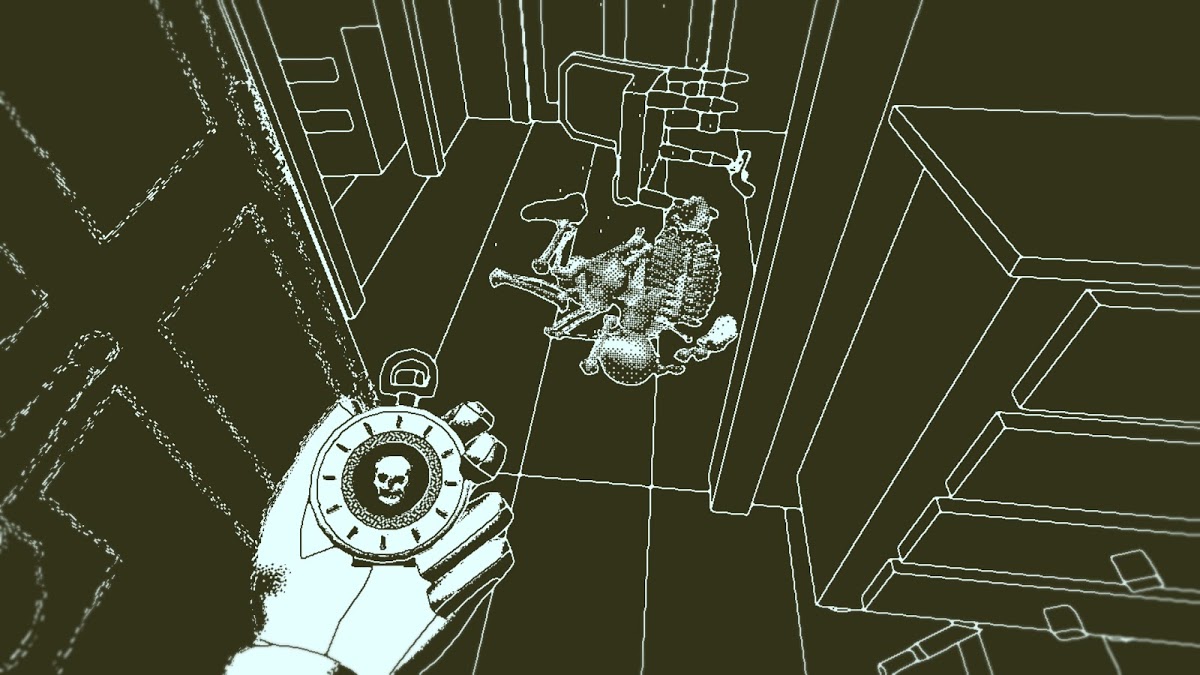 Hey there, you're in my way.

This one opens up on the black screen like usual, but with the words "Abigail". My first name! She's Abigail! All right.
The next words are even more relevant though, as the voice says he shot her brother. And then he asks for forgiveness before another gunshot. 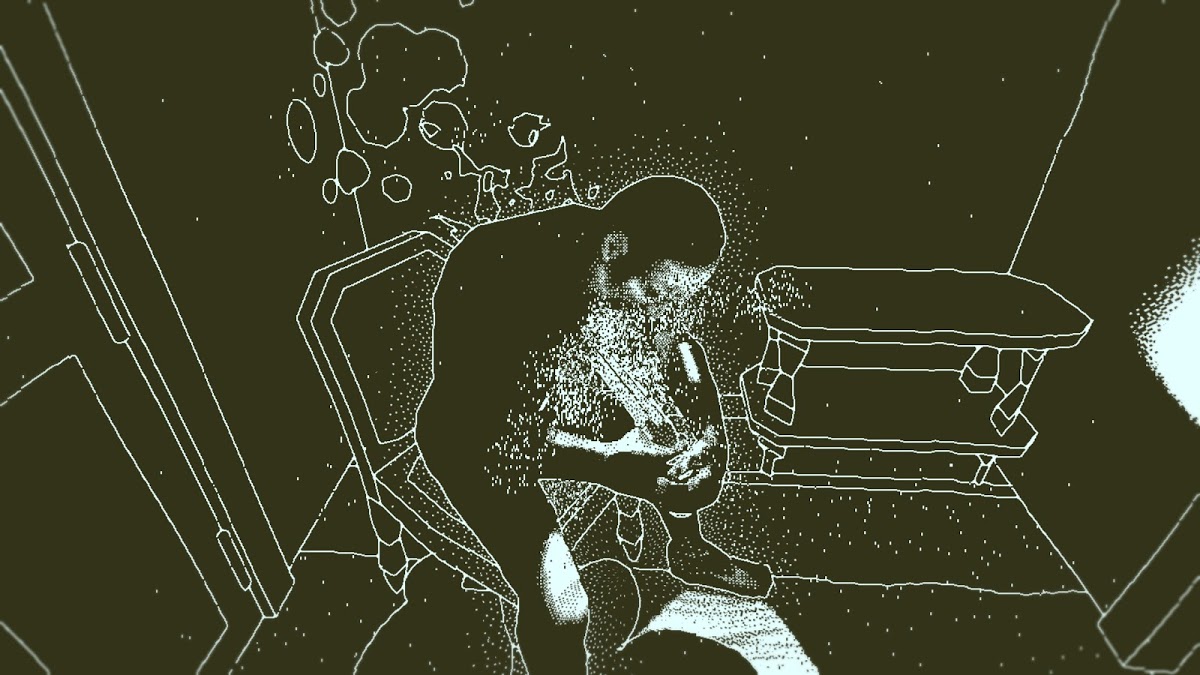 He shot himself. And turns out, now that we can see his face (and with the help of the game willing to identify him when we zoom in, we can tell that this is indeed the captain.

So, to recap, the captain, at the end, shot one, knifed another, clubbed a third guy, then shot himself.
Well, that's at least an easy one to solve. 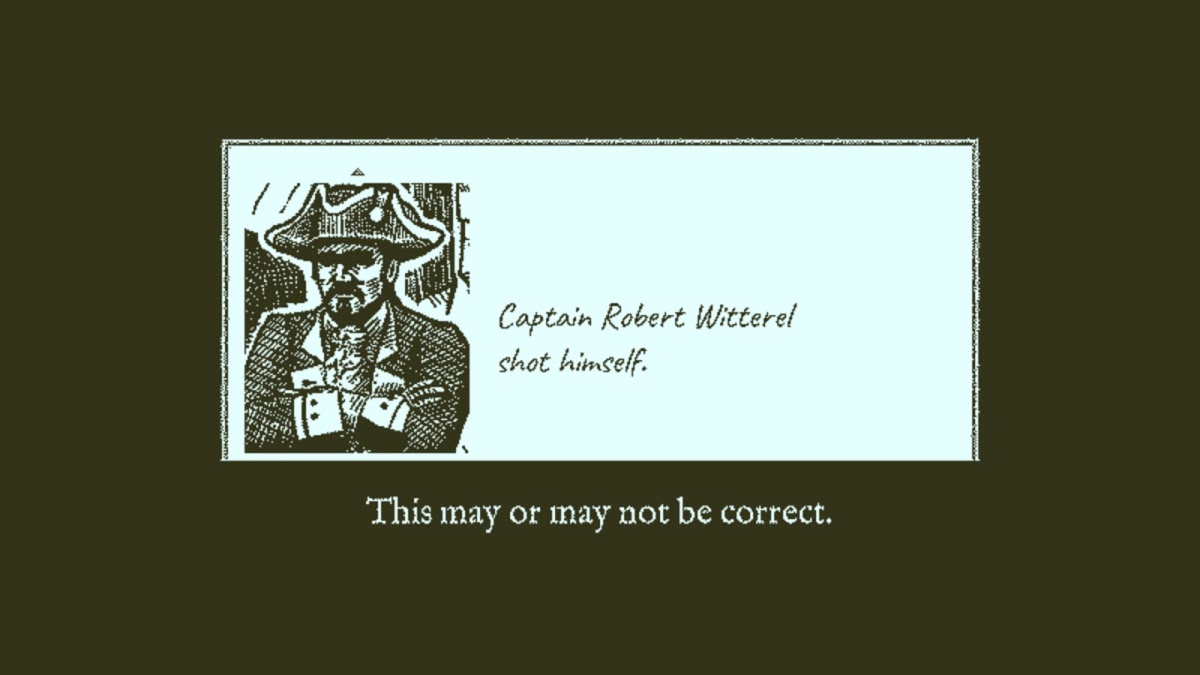 And then the game teases me, tells me that this may or may not be correct. And then it reveals its last trick: Murders are solved in groups of three. The game will reveal if you're right when you solve three murders at a time.
This is really damn clever. This means it's much harder to just guess through each murder until process of elimination takes you the rest of the way. I really like this.

But, now I have a clue! I know the captain killed Abigail's brother, so we can assume it's one of the last three murders we just saw.
And, notice what he said? He said "shot". He only shot one of them.

Time to check my data.
I open the ledger up and square the names in the ledger of crew on the ship. The captain's name was "Robert Witterel". The only Abigail on there is called "Abigail Hoscut Witterel." Bingo. 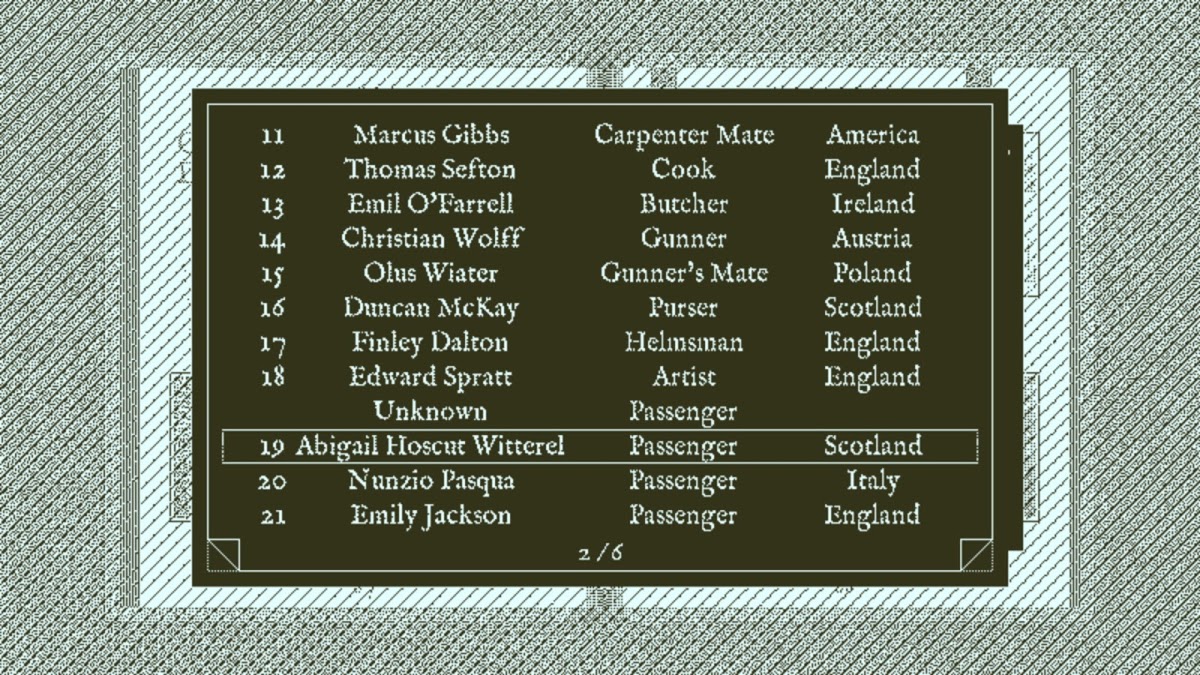 I am also a little unnerved by the presence of an "Unknown" on this ledger...

However, the ledger contains no other persons with the name Witterel, so I was a bit stumped. Maybe the captain was talking about someone else he'd shot?
Until I noticed the First Mate's name: "William Hoscut".
Ah. There we have our first victim and indeed, a murder completely solved.


That's some jolly good detectivin' if I may say so meself!

The presentation for all of this is spot on. There's definitely something Paper's, Please-esque about the string stabs timed to the reveal of a new piece of text, and the music when you step inside the frozen murders, but also the visuals themselves, the clean-cut two-color scheme that speaks for itself in the screenshots, but when you see it moving, it really shines.

And the subtle gameplay, the actual act of doing the detective work here is phenomenal. This is just one case, and I haven't gotten much further than this, but if this is only the beginning I cannot wait to see where it all goes.

The game says there were 60 people onboard this ship. That's a whole lotta murder. Or not murder! There's also the option to say someone's alive. To be fair. Not everyone was killed. 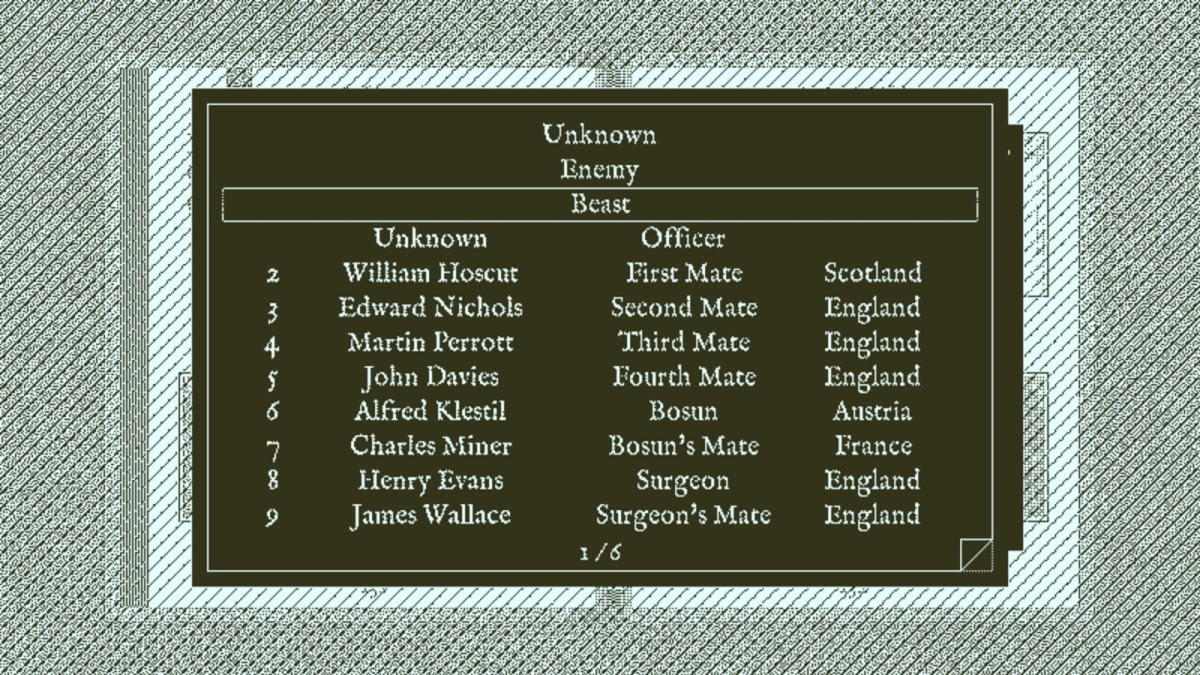 Wait, does that say Beast??

Oh, and how did Abigail die? You'll have to check that out for yourself.


Hope you enjoyed this little detour, because I sure as hell loved checking this game out, and I will squeeze some more time in during this week, if I can.